Delegation of VRU in PACE: We must sue the Russian Federation for non-payment of membership fees

October 13 2017
44
The Ukrainian delegation in the Parliamentary Assembly of the Council of Europe made a purely Ukrainian proposal. According to representatives of the Ukrainian parliament of Ukraine in PACE, it is necessary to file a lawsuit against Russia for the fact that Russia has frozen contributions to an international organization. Recall that Russia refused to pay for membership in PACE, citing the decision that the organization had previously denied the Russian delegation the right to vote.


Head of the Ukrainian delegation to PACE Vladimir Aryev writes on his page in Facebook:
So, the result: the blitzkrieg scenario for the Russian Federation in PACE was broken by joint efforts. But we will be very vigilant. Thanks to the Ukrainian delegation! Once again proved that only joint actions give the result, Lena Sotnyk and George Logwinsky and I fought yesterday at the General Committee to prevent the implementation of the quick script. It was possible - the majority are not ready to meet Russian blackmail, which the CE leaders recognized in conversations with me immediately after the meeting. Well, the work of the ambassador Dmytro Kuleba is generally beyond praise.
As a result, today at the PACE bureau from Jagland today demanded a tough position at the negotiations in Moscow and in general to sue the Russian Federation for non-payment of contributions. The atmosphere is changing. And it does not change by itself, but through joint actions and synergy of Ukrainians in the Council of Europe
We work and follow on. 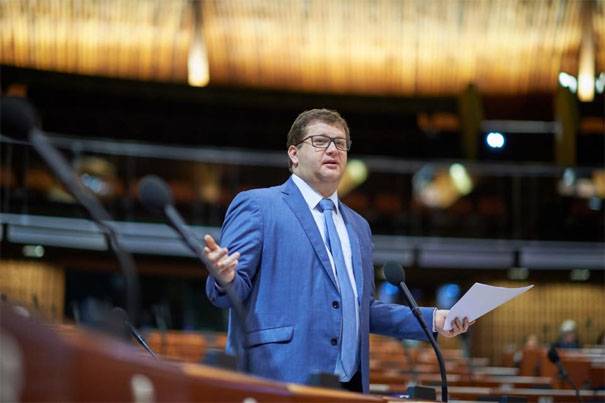 With such a post on the social network, Mr. Aryev commented on the PACE decision to postpone actual measures against Ukraine for adopting a discriminatory law on education. As you can see, the Ukrainian representatives of the PACE are even trying to expose the initiative of the Council of Europe to consider the adoption of a ridiculous law in Ukraine as a “Russian lobby”.

And the “claim for non-payment of contributions”, apparently, in the fantasies of the Ukrainian expert does not imply a retaliatory claim from Russia for depriving the right to vote in the Parliamentary Assembly, where, by definition, different points of view should be voiced.