China everywhere: from Algerian opera to tobacco in Zimbabwe

October 16 2017
8
Since the beginning of the XXI century, China has become a global supplier of "foreign aid." Beijing funds everything: from opera houses in Algeria to tobacco plantations in Zimbabwe. At the same time, “external assistance” is considered in the PRC as a state secret.


The veil of secrecy lifted analyst Adam Taylor, told about a study on the financial expansion of the PRC. The material was published in the American newspaper. Washington Post. 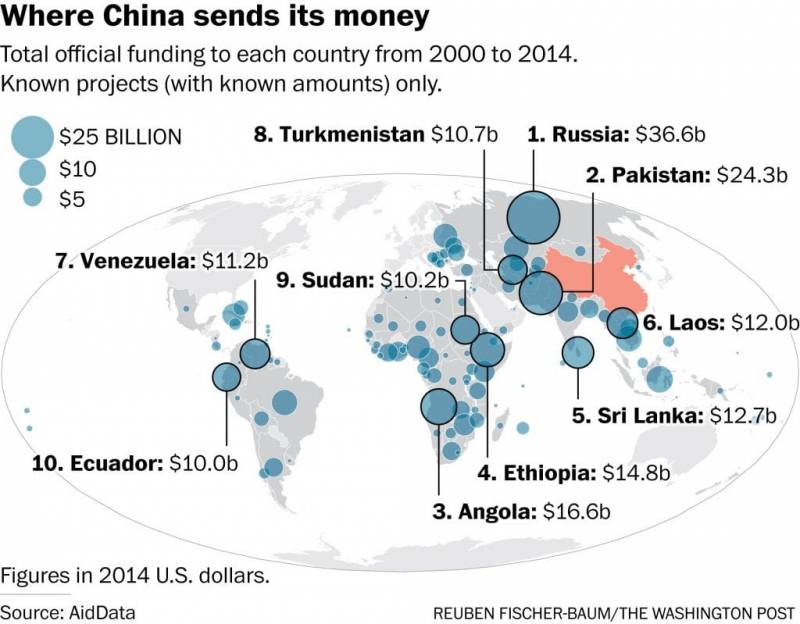 In the illustration, you can see how many billions of dollars have been poured into China in projects in different countries from 2000 to 2014. And these are only famous projects!

If you try to find detailed information about these projects, you are hardly lucky, Taylor points out. China regards the foreign aid budget as a state secret and flatly refuses to cooperate with international organizations that are trying to evaluate financing abroad. Partly because of the scarce information among Western critics of Beijing, an opinion has emerged: China is a “rogue donor”. That is, he generously gives money to illiberal regimes, but solely for the purpose of plundering local resources (read: raw materials) and using the loot to grow their own economy.

An ambitious research project released the other day puts this hypothesis into question. In fact, for the first time, the public is presented with comprehensive information on Chinese spending “on development abroad” in the period from 2000 to 2014.

Brad Parks, executive director of AidData, research laboratory at William & Mary College (College of William & Mary, the oldest educational institution in the United States, state-funded university located in Williamsburg, Virginia, founded in 1693), noted that a team of nearly a hundred scientists and assistants from around the world took five years to collect data, compiling 15.000 from various sources of information covering 4.300 projects in 140 in different countries and “territories”.

Parks assures that his research is based on “the most comprehensive and detailed sources of information” and provides a true picture of China’s global development. The end result is unique. According to the scientist, even Chinese officials “made inquiries” about the use of the document.

The AidData study paints a picture of a “growing financial giant who challenges even the largest donor countries.”

The study refutes common assumptions about the "lining" of Chinese foreign aid. AidData was able to show that Chinese aid meets a strict international definition: it is official development assistance (ODA). And she, apparently, is not motivated by the pumping of natural resources by “Peking comrades”.

“China is known for funding a number of governments with bad governance: in Venezuela, Angola, Iran and Pakistan,” says David Dollar, Art. Fellow at the Brookings Institute, previously holding the position of economic and financial representative of the US Treasury in China (2009 — 2013). At the same time, the PRC provides loans to a significant number of countries with relatively good governance: Brazil, India, Indonesia and East African countries. Therefore, the principles of financing projects by China are probably “indifferent to management”.

The study notes that Chinese aid is usually motivated by two interests: the level of need of the recipient country and the broad foreign policy objectives of China.

“China’s foreign aid criteria are not a type of government, but a rapprochement of interests,” said Yun Sun, an expert on Chinese funding from the Stimson Center (Washington). Such a rapprochement may be under a need of "political, commercial or even reputational."

The AidData study shows that the lion’s share of global donor spending is not really official aid, but is distributed through “other official flows” (OOF classification). And this includes the largest deals - for example, the giant loans provided by China to Russian oil companies in 2009: the latter’s motivation is “clearly commercial,” Taylor writes.

“ODA and OOF should really be considered separately,” says Brad Parks. “If a country is rich in natural resources, if it sells a lot to China and if it is creditworthy, then it usually gets a lot of OOF.”

Large-scale financing of the PRC includes the costs of “commercially-thought-out projects”, and this distinguishes China from Western donors, which largely diverted from loans and switched to grants. “China is acting by its rules,” Mr. Parks sums up.

There are interesting examples of growth from Chinese injections. If Chinese financing is in line with ODA, it stimulates economic growth in recipient countries - just like Western aid. If the country is at the stage of receiving such Chinese assistance, then two years after the completion of the project, she will see "an average increase of 0,4%" per year. A similar growth rate is typical for assistance from the United States and the Organization for Economic Cooperation and Development (OECD). This is higher than the result of World Bank assistance.

China is launching "the fourth year of its ambitious international infrastructure project, commonly known as" One Belt and One Road, "reminds the analyst. Therefore, understanding how he spends his money abroad is likely to become more and more important.

However, with regard to transparency, the experts recognize that Beijing is still skeptical of this: the Chinese are true to traditional secrecy.

That came China to the level of foreign funding, which international experts compare with the US. Obviously, in the near future on this economic front, the Chinese will overtake the Americans.

As for the “secrecy” mentioned, Beijing never hurried to share recipes of its prosperity and its achievements with the West. And it is possible that Chinese officials laugh at the palm of their hand over American scientists, who counted the spent Chinese billions. Perhaps trillions must be counted!

Observed and commented on Oleg Chuvakin
- especially for topwar.ru
Ctrl Enter
Noticed a mistake Highlight text and press. Ctrl + Enter
We are
Chinese footprint in Africa: China is crowding out the USA and EuropeAlgeria is answering calls
8 comments
Information
Dear reader, to leave comments on the publication, you must to register.