October 14 2017
143
"If war is inevitable, then let it be now, and not in a few years, when Japanese militarism will be restored as an ally of the United States and when the United States and Japan will have a ready-made foothold on the continent in the form of a Lisenian Korea." (Stalin - Mao Zedong. October 2 1950). 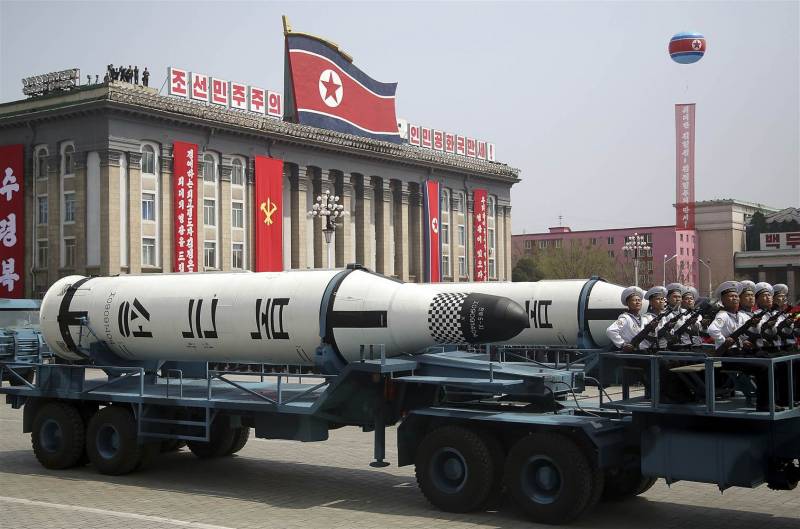 All past week Donald Trump unobtrusively hinted that diplomacy is powerless to deprive the DPRK of nuclear weapons. The probability of a military outcome, therefore, becomes prohibitively high.

Immediately I would like to dismiss the assurances of those "analysts" who took the excessive courage to assert that an attack on a nuclear power is impossible in principle. This rule did not work very well in the last century. Examples of this: Folklands, Damansky, Kashmir 1999 of the year.

But now the world has changed. And changed radically. If someone does not realize this fact, continuing to babble from the high tribunes about “friends” and “partners,” then so much the worse for him. Not to mention the fact that all this “partnership” previously existed solely in the imagination of some Russian government officials.

Another eminent "analysts" can recall the wonderful predictions of past years in the spirit of "Saddam will show them" and "Gaddafi will ask them." Where are your Saddam and Gaddafi now?

Nuclear weapons are not a universal remedy for all ills. Completely destroy the South and especially Japan, Pyongyang absolutely definitely can not. With his meager amount of charges, Kim Jong-un would not have been able to wipe out even a power the size of Israel, which is much smaller than the countries mentioned above. But after the use of nuclear weapons, the North Korean regime may include a countdown, because a retaliatory nuclear strike by the US will turn it into dust.

However, nuclear weapons are only a private episode in a possible war in the Far East. Based on our knowledge of the geography of the region, as well as the military strategy of the parties, we can roughly assume the scenario.

The initial wave will be the strike of the strategic bomber B-1 Lancer (from Guam) with the help of the CG AGM-158 JASSM, whose mission is to hit highly protected targets. I also do not exclude the use of B-2 Spirit bombers, which will fly from the mainland USA. The total number of CDs will depend only on the number of combat vehicles.

Simultaneously or with a lag in 10-15 min. Tomahawk cruise missiles, launched by the escort ships of the aircraft carrier Ronald Reagan, will arrive at the targets. One destroyer "Arly Burke" can carry up to 60 KR "Tomahawk", and the cruiser "Ticonderoga" - twice as much. Support fireworks will be able to modernized nuclear submarines "Ohio", which is dragging 154 powerful "gifts to Kim" - just one of these submarine cruisers USS Michigan at full steam goes to Korea. In total, the US Navy is capable of taking a volley of 350-550 units of Tomahawks alone. forces only deployed now in the Sea of ​​Japan ships.

At the same time, South Korea strikes. Unlike China, Japan, and Russia, official Seoul can’t get away from the war, so Moon Jae In’’s government will probably go straight with a trump card. By such an ace we mean BR Hyunmoo with a range of up to 800 km, based on wheeled platforms. Also aviation Over the past six months, South Korea has repeatedly demonstrated its CDs and air bombs to destroy fortified targets.

Obviously, in this situation, North Korea will receive a devastating blow to the military and partly civilian infrastructure immediately behind or at the same time as the first wave.

In the first hours, faced with a full-scale invasion, Kim the Third will stand in front of the fork.

First, he has a chance to contact the United States through diplomatic channels and urgently try to negotiate the conditions for preserving the regime in response to the abandonment of the nuclear program. And Washington can take them, by the way.

This option can actually suit everyone. Kim Jong-un remains in power, although he will lose nuclear toys.

Americans will be able to declare their victory and they will be right. Indeed, from the very beginning it was not the change of the regime in the DPRK that was declared, but the destruction of the North Korean nuclear program. Along the way, the States will rid themselves of the need to wage a grueling war in the mountainous and wooded area of ​​the Korean Peninsula.

Beijing and Moscow will also benefit. And it's not just that they will avoid radiation clouds on their borders. China will get North Korea in a much more docile and puppet form after defeat. Russia will consider the possibility of raising the question of the inadmissibility of building up missile defense systems in Asia - there is no threat anymore.

However, such a prosperous scenario can only dream of. Most likely, the political and military leadership in Pyongyang will decide to fight without fools, including the use of nuclear weapons.

However, the use of nuclear weapons is possible only if several conditions are met.

The first. The North Koreans really developed a compact nuclear device that can fit in a ballistic missile warhead. This task itself is not trivial, frankly. And it requires very serious technology.

The second. All ballistic missiles will not be destroyed in bunkers during the first wave of coalition attacks. This, of course, is unlikely, but the destruction of most of them does not look so fantastic.

Third. All soaring media will be OK. Marriage and lack of quality in the aerospace industry, until recently, remained the scourge of North Korean industry.

Fourth. Started single media will not be destroyed by missile defense systems. And in South Korea and Japan, it is a two-layer. THAAD is responsible for the first (long-range interception) in the South and Aegis + Standard Missile 3 SM-3 Block IB in Japan. The second interception layer is provided by the Patriot PAC-3 in both countries.

And the most important thing. The use of nuclear weapons against South Korea, Japan or any of the territories of the United States practically unleashes the Pentagon to use nuclear weapons on the widest scale, which means not only the death of the North Korean state, but also the total extermination of the population. I do not think that this is not understood in Pyongyang. Even Hitler on the craziest days did not dare to use chemical projectiles on either the Western or the Eastern Front for the banal reason: the Allies would have found much more such weapons.

Of course, only those who are defective in mind can rejoice in the potentially possible death of hundreds of thousands of South Koreans and Japanese if Kim performs his worst threat regarding the use of nuclear weapons. However, there are quite objective reasons for concern. Such a tragedy, without any doubt, will return South Korea to the state of rapidly arming military dictatorship of the times of Chon Doo Hwan, not to mention Japan, which will reject all democracy and pacifism and follow the example of the South Koreans. In such an atmosphere, the creation of nuclear weapons by Seoul and Tokyo will become only a matter of time - and not for long.

For a weakening Russia, such an outcome can have the most unpleasant consequences.

If we talk about the purely military use of nuclear weapons by Pyongyang, then there are much more prospects. First of all, it is about the devastation of the largest military bases of the South, and especially the port facilities. And the most priority goal here will be the famous Busan.

The fact is that the ports are simultaneously naval bases and terminals for the arrival of reinforcements from among the American troops. The fleet in the second Korean war will play the same key role that it played in the first. Obviously, instead of cracking the fortifications behind the demilitarized zone, the allies will most likely decide to land on the much less fortified coast of the North. It is no coincidence that the South actively developed precisely this component of its fleet.

If nuclear weapons are left out, then the most likely answer of the northerners to the first wave of attack will be the artillery terror of Seoul. They wrote a lot about it, savoring the tens of thousands of dead citizens, but everything is not so simple. For in the very first minutes after the artillery of the northerners, the hunt will begin from the air forces of South Korea and the USA. Under the conditions of their complete supremacy in the air, the destruction of the artillery of the North will become a matter of extremely short time. Well, the counter-battery struggle, as without it. 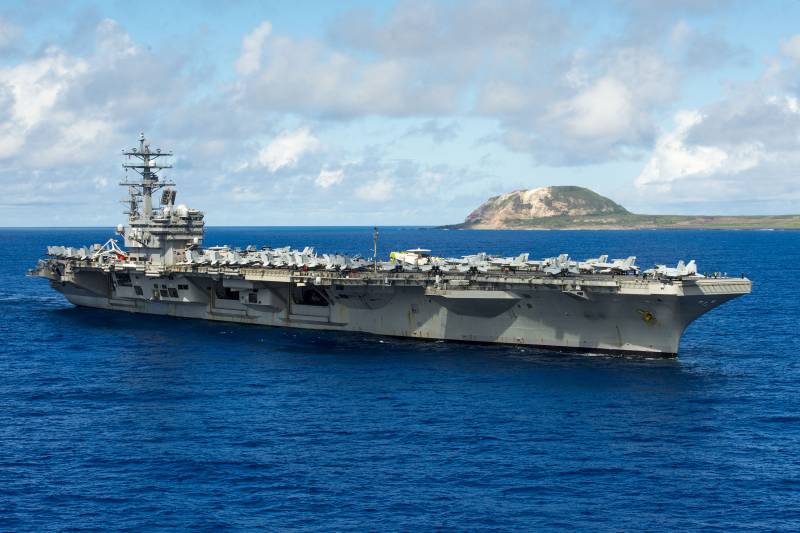 Simultaneously with the airfields of the South and the deck of the aircraft carrier Ronald Reagan, the second stage of the air raid will begin. The targets will be airfields and naval bases of the North, as well as command posts and air defense units that survived the first wave.

There is no chance for North Korean aviation. Only submarines that are already at sea will survive from the fleet. The rest, as well as the entire surface fleet, are just targets. Ducks in the dash.

In the very first hours, Pyongyang's submarines (outdated, but numerous) will try to break through the country's sea blockade. The chances of this are small, but there is precisely because of the large number of underwater hunters.

In general, this section “first hours” can be considered complete. Next, start the "first days". Obviously, the coalition will have a decisive advantage from the very beginning. And only the question of the damage that the Americans will be able to inflict on the strategic nuclear forces and military control systems of the DPRK remains open.

If the States are able to hit key command posts and underground headquarters, then the paralysis of the decision to retaliate can be very much delayed. The destruction of Kim Jong-un himself risks losing control into chaos.

Geography in this regard plays both for and against the North Koreans. On the one hand, the mountainous-forested area prevents the army of potential adversaries from detecting and eliminating all military strategic facilities. On the other hand, the area of ​​the DPRK does not exceed the area of ​​some regions of the Russian Federation. That is, it is easier to cover a small territory with a reconnaissance resource: satellites, UAVs, etc. Although the number of underground military facilities of the DPRK amounts to thousands, it is not possible to cover them reliably from modern means of detection.

And, of course, the decisive role will be played by how early the government in Pyongyang learns about the date and time of the United States attack on Korean objects. Here only the PRC, which has the appropriate resources, can help. If it becomes known about the inevitable strike at least three hours later, the chances for the DPRK armed forces will increase significantly.

Ctrl Enter
Noticed a mistake Highlight text and press. Ctrl + Enter
We are
About Stalin and KhrushchevMorning freshness with a nuclear flavor
143 comments
Information
Dear reader, to leave comments on the publication, you must to register.