The turning point in the Baltic sky: will we be able to fend off the hidden threat of the “watching” Rivet Joint? 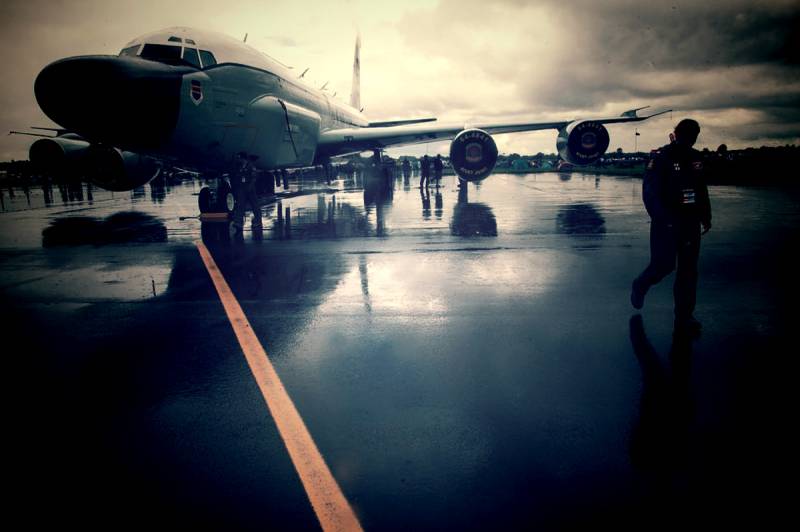 Literally every week, news continues to come about the ongoing reconnaissance flights of the tactical and strategic electronic reconnaissance aircraft of the NATO Air Force in the immediate vicinity of the most powerful air zones of restriction and restriction of access and maneuver (A2 / AD) created in the Kaliningrad and Leningrad regions. We are talking about strategic aircraft RER type RC-135W US Air Force and Royal Air Force of Great Britain, as well as the lighter aircraft RER "Gulfsream 4" of the Swedish Air Force. Moreover, near Russian air borders over the southern part of the Baltic Sea and the Gulf of Finland, one can very often find long-range P-8A Poseidon anti-submarine aircraft scouring over the water area for magnetic anomalies and acoustic radiation sources indicating the presence of project diesel-electric submarines 877 "Halibut" and other underwater vehicles for military purposes. The presence of Poseidons in this region is unlikely to cause serious concern among the Baltic command. fleet, because the acoustic profile of these submarines has probably already been studied along and across by means of the RSL dropped by the patrol aviationand a Type 212A submarine patrolling the waters of the Baltic Sea.

No serious consequences threatening the security of the state should be expected from the use of the integrated turret opto-electronic surveillance system MX-20i installed on the P-8A. Despite the television and infrared channels of operation of this complex, as well as 50 — 70-multiple long-focus optics, allowing to classify ground-based units of military equipment at a distance of more than 50 km, MX-20i does not have the ability to recognize masked objects. As for the airborne radar AN / APY-10 (AN / APS-137D (V) 5), it is represented by a parabolic antenna array operating in centimeter X-waveband and has a resolution around 3,5 — 4 m. Despite the huge number of modes work, including synthesized aperture (SAR) and reverse synthesized aperture (ISAR), the above resolution in the mapping mode does not allow identification of remote coastal objects on the coast of the Kaliningrad and Leningrad regions, and the ISAR mode with a resolution of 1 m This is due solely to the locking around the object being explored, which is an unrealizable task in the operational-tactical conditions of the Russian A2 / AD zones in the Baltic States.

The RC-135W and Gulfstream 4 electronic reconnaissance aircraft pose an immeasurably greater threat. The basis of the onboard radio-electronic equipment "Rivet Junction" in the version of "Block 8" are the radio-electronic and radio-intelligence complexes 85000 and 55000. The first one is designed to intercept, decipher, and analyze the enemy’s radio communications, as well as intercept enemy data packets with information about the tactical situation, transmitted via secure channels between surface, ground and air combat units. So, for example, the REER 85000 complex can intercept radio channels of transmission of information about the air situation from A-50 airplanes to consumer terminals (Su-27СМ / 30СМ and Su-35С); There are no exact data on its decryption capabilities yet. Most likely, due to the use of pseudo-random tuning of the operating frequency, the operators of the decoder and the decryption software of the working terminals RC-135W are not capable of such abilities. The distributed aperture of the 85000 complex is represented by a network of blade and whip antennas integrated into the lower part of the fuselage and wingtip, respectively.

One of the key features of the "85-th" complex is the possibility of direction finding of any omnidirectional radio stations operating on radiation in the frequency range from 0,04 to 17,25GHz. In conjunction with the ability to analyze the frequency parameters of the signal, this makes it possible to form a satisfactory frequency algorithm for setting directional radio-electronic interference. As is known, their production can be carried out by the most advanced tactical aircraft of electronic warfare F / A-18G, the terminal of which will receive the above algorithm over the radio link-16. The 85000 complex equipment, also known under the ES-182 MUCELS (Multiple Communication Emitter Location Systems) index, has an average detection and interception range of the order of 900 km (depending on the height of the radiation source and its frequency of operation).

With the standard RC-135W flight path over the southern part of the Baltic Sea, the radius of electronic intelligence in the eastern operational direction can cover St. Petersburg, Moscow, Nizhny Novgorod and almost the entire central belt of Russia. Confusing the ES-182 MUCELS complex is possible only through the large-scale deployment of ground-based electronic countermeasures such as “Krasukha-4” or “Murmansk-BM”. The former are capable of partially “blinding” MUCELS in the whole range of its operating frequencies, the latter - in the shortwave. Nevertheless, the activation of all EW complexes in the Western and Southern military districts for the suppression of the only RC-135W "Rivet Joint" avionics appears completely absurd: regular "games" of this nature in non-military times can cause significant interruptions in civilian radio communications, as well as to beat the defense budget.

A good solution could be the formation of a specialized electronic counter squadron (REP), represented by 12 multipurpose Su-30CM fighters with the Khibiny complexes on board, which would target the air defense radar in the Kaliningrad region and form air defense stations The direction (in the direction of the review of “Rivet Joint”) is several levels of radio resistance, turning into an excellent air barrier. A more economically viable solution would be to place EF multi-frequency complexes on specialized airships located on the most important sectors of the western air border of Russia. As we know, the United States has a vast experience in using airships for DRLO objectives; in the same way, they can be adapted to radio electronic countermeasures tasks.

The accuracy of determining the coordinates of radio-emitting objects is 0,01 °. When flying along our air borders in the European theater of operations, the AEELS complex allows us to “probe” all the survey, accompanying and firing frequency parameters of the above classes and types of radars, which allows the US Air Force to receive a detailed report on the frequency profiles of a large list of radar equipment. The result can be considered as an improvement in the level of training of EW aircraft crews, as well as tactical and strategic aviation to a possible confrontation with the Russian Aerospace Force during the likely start of a regional conflict. The sensitivity of AEELS interferometric antenna arrays is ten times higher than that of most well-known radiation warning stations (STRs) of a tactical 4 fighter and a transient generation, therefore, in combat conditions, 16 operators of the complex can illuminate tactical information about the air situation much earlier than other means of airborne reconnaissance.

The same electronic countermeasures that were described above with respect to the ES-182 MUCELS (85000) complexes are excellently suited to counteract these Rivet Joint complexes. Nevertheless, today (from the point of view of the VKS), they can be considered very “exotic”, because the concept of developing large airships in Russia is only beginning to slowly move from the level of research projects to the draft design of a future prototype. Thus, relying on the statement of Gennady Verba, President of the Rosaero-Augur Research and Production Association, the construction of the first pilot airship of the Atlant family will be completed only by 2022. Only after this will it be possible to more extensively discuss the possibility of using airships for EW purposes in relation to Russian videoconferencing.

As for the countermeasures being undertaken today aimed at countering the American, British and Swedish REAR planes "played" in the Baltic skies, the naval aviation of the Baltic Fleet of the Russian Navy will make its move. According to the May statement by the BF Commander Alexander Nosatov, by the end of this year, the naval aviation of the fleet will be already equipped with 17 multipurpose Su-30CM fighters. These vehicles, equipped with the HNNXM Bars airborne radar, will be able to start escorting the approaching US and Rivet Joint's from about 011 times more distance than Su-2 does today. Optimism is also added by an anonymous source, who told Interfax the day before, that the aviation component of the Baltic Fleet, due to the increasing presence of the NATO contingent in the Baltic countries, will significantly expand.

Ctrl Enter
Noticed oshЫbku Highlight text and press. Ctrl + Enter
We are
Electronic intelligence of the Armed Forces of UkraineDiesel-electric submarines of the 877 "Halibus" project
14 comments
Information
Dear reader, to leave comments on the publication, you must to register.