October 13 2017
13
The divisions of Rosguards are charged with the solution of various tasks related to ensuring order and safety of the civilian population. Some of these tasks, due to their specificity, require the use of special equipment and technology. One example of the latter is the reconnaissance chemical machine РХМ-ВВ, which recently entered service.


Relatively long ago, the reconnaissance chemical machine (RCM), the UAZ-469px, built on the basis of a common multipurpose automobile chassis, was adopted by the internal troops. Over time, this car had become obsolete and demanded a replacement. At the beginning of this decade, the Ministry of the Interior launched the Razruha-1 research and development project, during which it was planned to create a modern PCM based on a new chassis with higher performance. 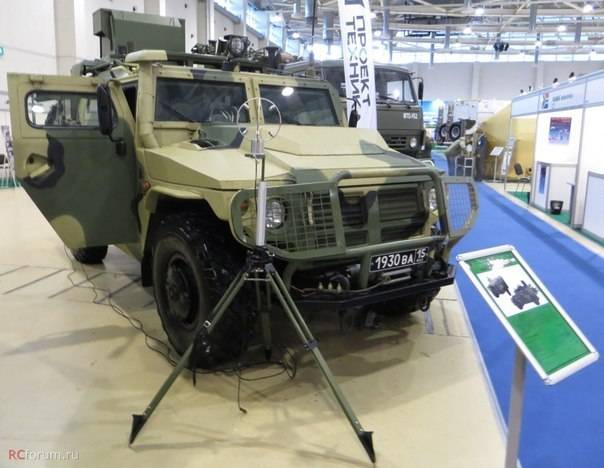 OCD "Razruha-1" was launched in 2011 year. Soon the customer, represented by the Ministry of Internal Affairs and the internal troops, chose a contractor who was to develop a new project. The works were performed by the Center for Special Designing "Vector" (Moscow). In addition, enterprises of the automotive and instrument-making industry participated as suppliers of various units. The design continued for several years, and in 2013, Center "Vector" was able to show the first real results of the new project.

In the autumn of 2013, the next international exhibition Interpolitech took place in Moscow, during which domestic enterprises showed already well-known and new developments. The Vektor enterprise brought to the exhibition the first prototype of a reconnaissance vehicle created during the ROC Razruha-1. Along with the layout, visitors to the exhibition could see some of the special equipment and promotional materials. The following year, the Interpolitex-2014 exhibition became a platform for the first demonstration of a full-fledged prototype.

As it was announced during the “premiere demonstration” of the layout, the new model of equipment received the official designation PXM-VV - “Intelligence chemical machine, internal troops”. Also in relation to the sample was used the cipher of the entire program - "Ruin-1". In later materials both names appear.

At the exhibition "Interpolitech-2014" it was stated that the enterprises participating in the project are ready to begin mass production of equipment in the very near future. The start of deliveries could be assigned already to 2015 year. The cost of one reconnaissance vehicle with a full set of equipment reached 36 million rubles.

In the future, an experienced reconnaissance chemical machine several times participated in new exhibitions organized by the military department and other structures. In parallel with the demonstration of finished equipment, the developer and the customer continued the necessary work. RHM-BB passed the necessary tests, according to the results of which certain conclusions were made. Apparently, the technique received good reviews, which made it possible to continue preparing for its full service.

A few days ago it became known that the RHM-BB “Razruha-1” machine reached trial operation. At present, the experimental equipment has been transferred to one of the divisions of radiation, chemical and biological protection of Rosgvardia, which will have to undergo a new check and assessment. Probably, in the foreseeable future, the current project will end with the deployment of full-fledged mass production and the beginning of deliveries of equipment to the front-line units.

The RHM-VV project offers the construction of a self-propelled protected machine equipped with a complex of special equipment for conducting radiation, chemical and biological reconnaissance in various conditions. To study the conditions on the ground machine equipped with a set of detectors for various purposes. In addition, there are facilities on board for taking air, soil and water samples for delivery to the laboratory.

The two-axle armored car VPK-1 "Tiger", previously created in accordance with the requirements of the Ministry of Internal Affairs, was taken as the basis for the Razruha-233136 reconnaissance vehicle. This car has an armored hull layout, corresponding to 5 protection class. Used diesel engine Yaroslavl production, coupled with a mechanical transmission. Permeability on all landscapes is provided by a four-wheel chassis, built on the basis of an independent torsion suspension.

During the construction of the RHM-BB base car does not undergo significant changes. A single internal compartment of the body with a sealed partition is divided into two volumes. The front compartment performs the functions of a control compartment, while the rear compartment accommodates special equipment and the workplace of a reconnaissance chemist. Also, part of the equipment had to be mounted on the roof of the case and on the rear door. Some instruments are portable and designed for use outside the cabin. For their storage there are appropriate styling.

A certain increase in work efficiency is achieved by automating some processes. Crew workstations are equipped with a set of various remote controls to monitor the operation of all onboard equipment. Some procedures are carried out by automation with minimal human participation.

Radiation detectors are present on board the “Razrukhi-1”, allowing to detect α-, β- and γ-radiation, as well as measure its parameters. Gas analyzers of various types are used for chemical reconnaissance. The presence of the latter, in particular, allows the crew of the vehicle to conduct reconnaissance both on the spot and from a certain distance. In the latter case, it is proposed to use a laser system. Regardless of the method of use, the onboard equipment is able to detect chemical warfare agents, toxins and aerosols of biological agents in the air.

The crew has a compact set of means for observing the meteorological situation. Using data provided by this system, specialists can predict the spread of threats and assess the risks. The complex is made portable. Due to the lack of space inside the base machine, it is proposed to deploy it on the ground after arriving at a given position.

Moving through the contaminated area, the RHM-VV “Razruha-1” can mark dangerous areas, for which it is equipped with an automated marking system. On the fastenings of the spare wheel, placed on one of the wings of the aft door, a throwing device is fastened with several cups-trunks for signal flags. While the car is moving, flags at a given interval are fired at the ground, indicating the boundary of the dangerous terrain. In the appropriate packing of the internal compartment of the machine, a stock of flags is stored in case a ready-to-use “ammunition kit” is used up. 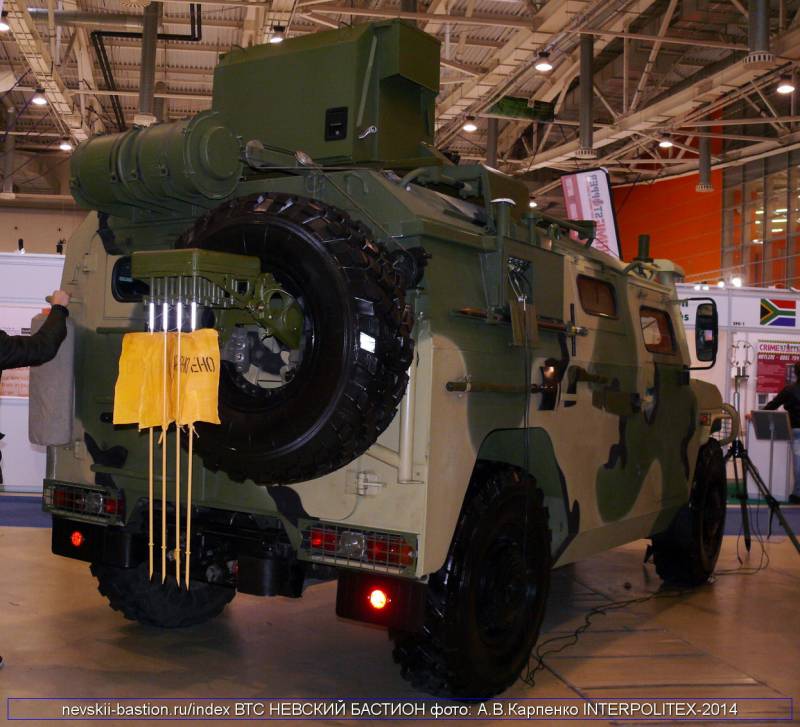 The crew of the reconnaissance chemical machine consists of three people. In the front compartment of the corps, performing the functions of the department of management, are located chemist-driver and commander. Aft compartment with special equipment is intended only for a reconnaissance chemist. With the restructuring of the RCM armored car retains a full set of standard glazing, providing a good overview of the road and the surrounding area. Also, the doors remain in their places: it is proposed to get into the control room through the side doors, into the rear compartment - through the aft doors.

Inhabited volumes are sealed and equipped with a collective protection system against weapons mass destruction. The RHM-BB crew has a radio station to transmit data on the current situation and the results of the reconnaissance.

The project "Ruin-1" does not provide for the use of any weapons placed on the reconnaissance vehicle. In the event of an attack by the enemy, the РХМ-ВВ has only a block of smoke grenade launchers. Six trunks are located in the left front of the roof of the armored car and are intended for firing into the forward hemisphere. The crew must have a personal weapon that can be used for self-defense.

Despite the availability of new equipment and specific tasks, the new reconnaissance chemical machine is almost the same as the base armored vehicle "Tiger" in its size, weight and driving characteristics. The length of the PXM-BB "Razruha-1" is slightly less than 6 m, width - 2,4 m, height - of the order of 2,5 m. Curb weight is declared at the level of 8 t.

Having saved the power plant and the undercarriage of a serial armored car, the PXM-BB gets similar mobility indicators. The maximum speed on the highway reaches 110-120 km. However, when conducting reconnaissance, the speed of movement is limited to 30 km / h, which is necessary for the proper operation of special equipment.

According to 2015, the test reconnaissance chemical machine for the internal troops was undergoing the necessary tests, the results of which could soon be put into service. However, new reports on the fate of the RHM-BB project had to wait for more than two years. Only in October 2017 it became known that the new special equipment entered service in parts of the RCBZ Rosgvardiya.

Over time, new reconnaissance vehicles of the type РХМ-ВВ will have to replace outdated equipment of their class. Due to this, the parts of radiation, chemical and biological protection will be able to more effectively solve their main tasks. In addition, the use of a new base car will reduce the risks in the performance of tasks. From the latest reports, it follows that in the very near future Rosgvardia will be able to fully realize all the advantages of the new technology.