Riding on the rivers 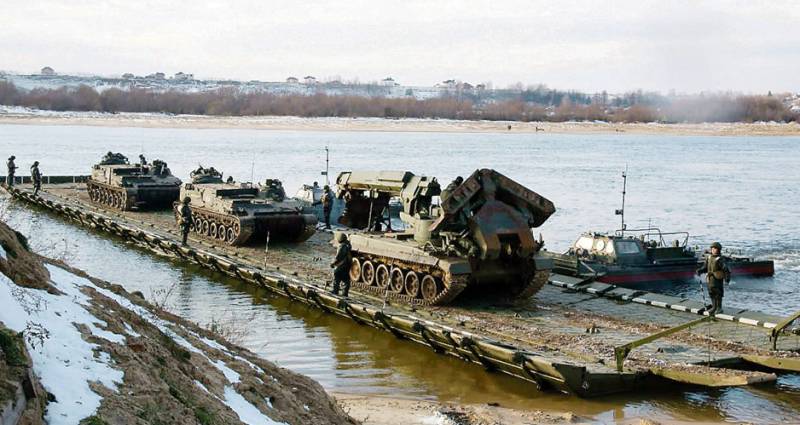 During the civil war in Syria, there was no serviceable engineering equipment and specialists, so when the need arose, the ferry fleet had to be moved from Russia. It took just three days to build the Euphrates crossing in the Deir-ez-Zor area, taking into account the delivery of equipment over several thousand kilometers.

The dismountable bridge allowed the Syrian military to continue the successful offensive, the militants of the IG banned in Russia did not have time to gain a foothold and prepare for defense. It is worth remembering that during the war in Syria and Iraq, the parties repeatedly faced the need to force rivers and bodies of water, but each such obstacle created serious problems for the attacker and often led to the disruption of the operation. It turns out that the secret armies of the world now possess the secret of crossing guidance.

Pentagon in the fight against remnants

In the world over the past few years, the development of the tactics of engineering troops and the equipment given to them went only in one direction: the deactivation of explosive devices. Back in 2008, in a report on modern wars and armed conflicts, Pentagon experts stated that the need to use special equipment to organize the crossing is very unlikely. However, this thesis is refuted by the experience of coalition fighting in Iraq and Syria.

Prior to the beginning of the 90-s, the USSR and NATO paid close attention to the development of technology that ensured unhindered movement of troops in a combat situation. The arsenals included not only mobile means of mining and demining, but also various machines that accelerated the erection of field fortifications and helped pave the roads. A special place was occupied by means of crossing. The countries of NATO and the Warsaw Pact were preparing to fight in Germany, where there are many rivers, lakes and man-made reservoirs. The predicted theater of warfare imposed its demands on armored vehicles. Soviet armored personnel carriers and infantry fighting vehicles were necessarily created floating, and their design implied minimal time to prepare for forcing water obstacles.

And pontoon parks were included in the list of priority ground targets for the NATO Air Force. A kind of “war on bridges” was planned at the headquarters of the Alliance: crossings are destroyed before the advancing ATS forces, and while new troops are being stranded on the other side, aviation and artillery strikes. To inflict losses on the engineering units with such tactics became very important.

First of all, special anti-vehicle mines were created to combat pontoon parks. They were equipped with artillery shells and rocket volley fire systems. The power of mines thrown this way on the roads was enough to rip the wheel or kill the caterpillar of a vehicle transporting pontoon property. Damage seems to be minor, but they could seriously slow the passage of columns. 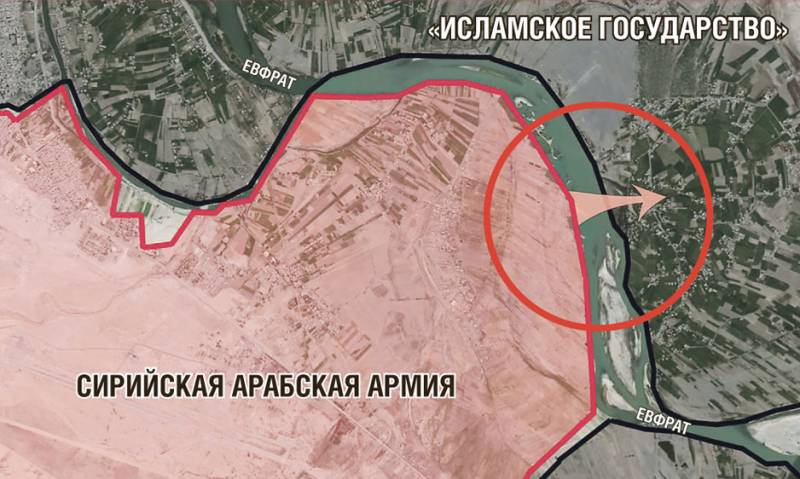 With the end of the Cold War in NATO countries, engineering technology was gradually being removed from service. The development of new products of this kind was not conducted. Engineering units and units shrank.

In the 2003 year, during the invasion of Iraq, the Pentagon abandoned the use of pontoon parks, although several major rivers were to be forced through the offensive plans. Instead, the troops had to move decisively forward, preventing bridges from exploding. Especially for the capture of crossings planned raids of reconnaissance units and special forces.

But the British allies decided not to risk it. The composition of their forces included several pontoon parks and units with heavy engineering equipment. All this property was useful during the battles in Basra and the crossing of the rivers.

At the end of the active phase of the conflict, representatives of the Central Command, who was responsible for planning and conducting operations, stated that they had taken radical measures to increase the maneuverability of the troops. The abandonment of engineering and transfer equipment has become one of these solutions. It was argued that it fully justified itself. 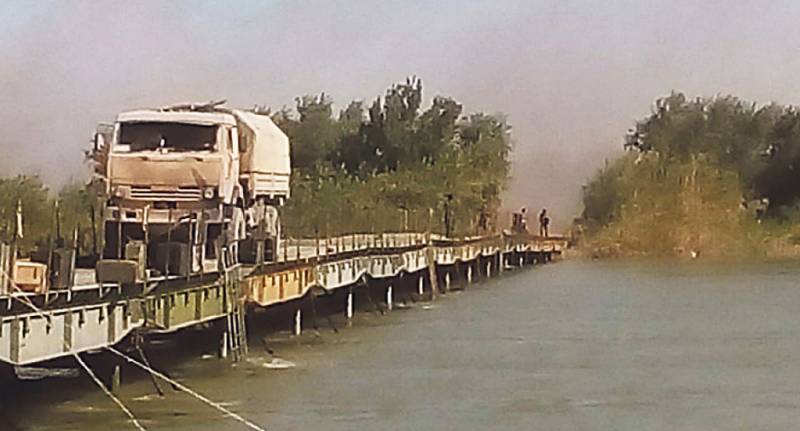 However, a few years later, the US military released several scientific papers in which experts dismantled all aspects of the invasion of Iraq in 2003. And the rejection of special equipment already looked a little different. In fact, at that time in the US Army there were not enough trained engineering units and subunits. Therefore, it was their absence, and not only the desire to maintain a high rate of attack, that led the coalition to seize bridges in advance.

For the same reason, they, like road junctions, were excluded from the list of targets for American aviation. It is impossible to quickly restore such objects in the absence of strong engineering units.

But despite the conclusions of experts, in the year 2008, the Pentagon continued to assert that transporting means are remnants of the Cold War, and the main task of the engineering units is to fight improvised explosive devices.

Unlike NATO and the United States, the Russian military did not think that it was time to say goodbye to engineering equipment and transport facilities. The experience of fighting in Chechnya confirmed such conclusions. At the end of 80, a large number of unique designs of various engineering vehicles, pontoon parks and other property were developed. The main problem was the lack of money for the purchase of such equipment. 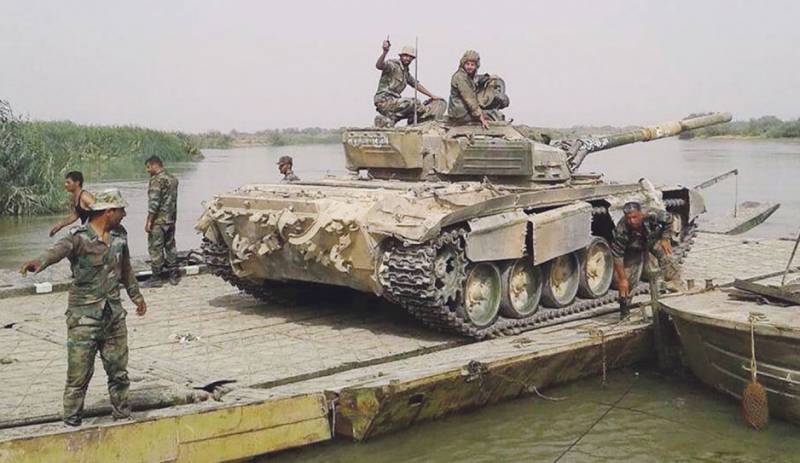 We have repeatedly held exercises in which the use of engineering troops during local conflicts was practiced. The equipment and pontoon parks were used both for conducting combat operations and for crossing rivers. From the beginning of the 2000-x developed a thorough methodological base, mastered the new tactics.

A big help for the Armed Forces of the Russian Federation was the adoption of the newest pontoon fleet PP-2005М. It includes more than 40 machines. They carry not only ferry sections, but also special boats. From the standard kit, you can assemble a bridge with a length of more than 250 meters and a lifting capacity of 120 tons. At the same time, direct work on targeting takes about an hour. According to its characteristics and technical solutions, this pontoon park is the best in the world. 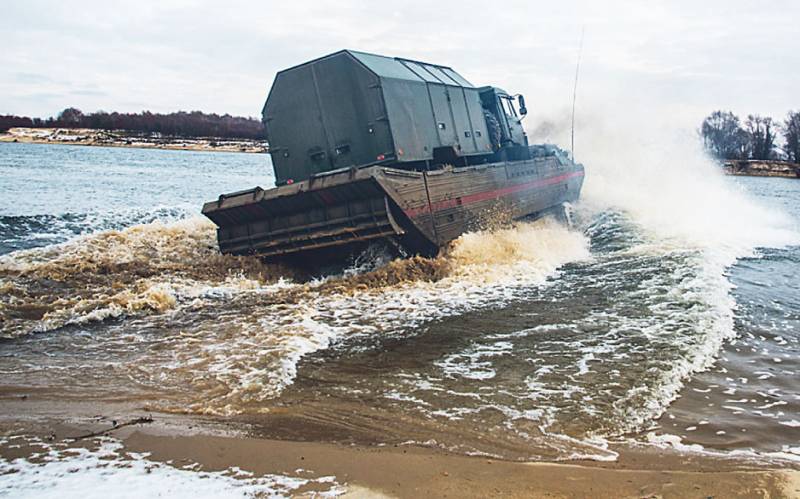 It was the timely-activated PP-2005M that allowed the Syrian forces to force the Euphrates. And more recently, Russian engineering technology has attracted close attention of foreign customers.

After us - even a pontoon

In December last year, during the storming of Mosul, IS groups effectively used the natural obstacle on the way of the Iraqi troops - the Tigris River. Remaining several crossings under control, the militants eliminated the rest. Initially it was planned that the coalition troops would beat off the objects from the IG, but the enemy was effectively defended, and reinforcements went along the bridges. Therefore, they had to be bombed. This weakened the defensive capabilities of the jihadists, but it also created many problems for the attackers. And the Americans were forced to recall the Soviet experience. 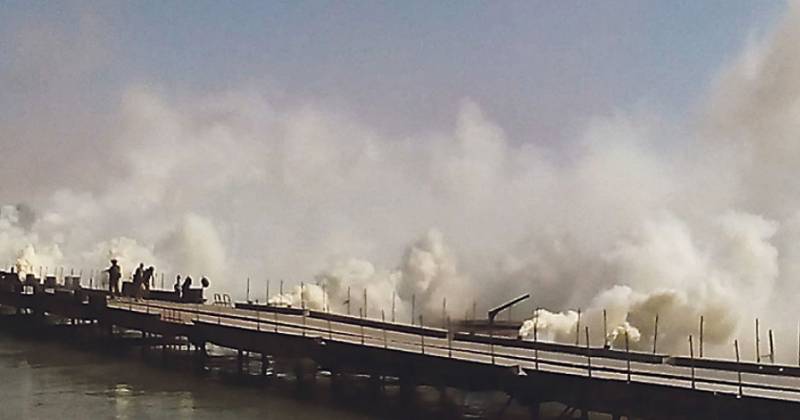 Since the days of the Iran-Iraq war, Baghdad’s arsenal contained Soviet PMP pontoon parks; by the 2016, they were partially preserved. The US military engineers immediately began to restore them, purchasing the missing items from the reserves left over from the Czechoslovak army. HEMTT delivered PMP to the Tiger area.

The appearance of the pontoners was a complete surprise for the IS units. True, the militants quickly came to their senses and tried to counter, launching mortar attacks and even drones. This seriously slowed the passage of Iraqi troops, but could not stop the offensive - units tank Iraqi armed forces managed to cross the other side of the Tigris. Although the low speed of erection of crossings and the transfer of technology allowed the jihadists to withdraw and prepare new defensive positions. 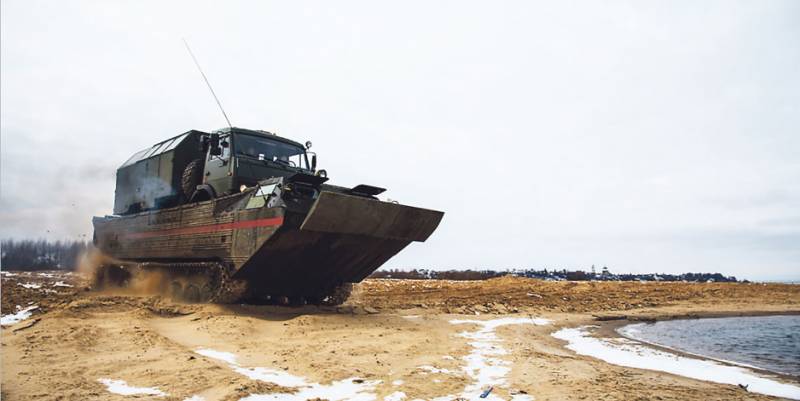 A similar situation exists in Syria, in the Raqqa region. The US military could not transfer pontoon parks from Iraq here, and the problem of the ferries was resolved by the rangers' raids. Using the support of helicopters and acting on Stryker armored vehicles, the soldiers of the 3 battalion of the 75 regiment were able to fight off and hold several crossings, which became a key element of the Kurdish forces. But in the presence of transfer equipment, Western experts note, the American units and Kurdish troops could simply bypass the enemy’s positions and transfer where it is more convenient. 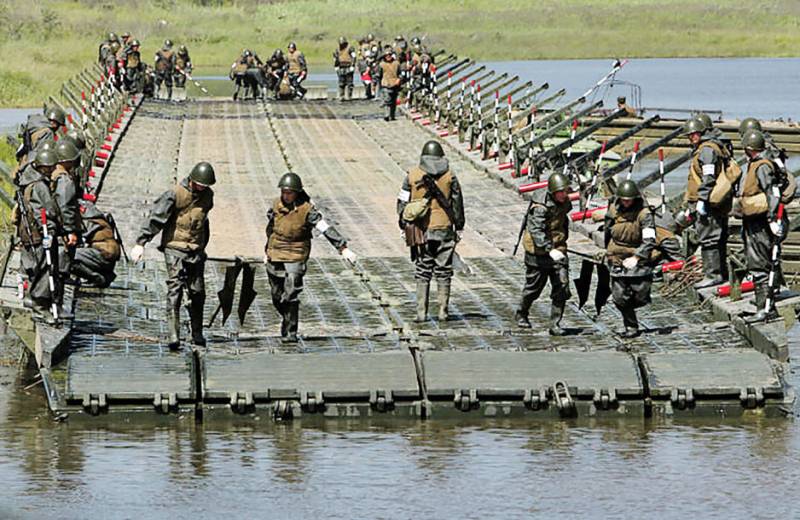 The fighting in Syria and Iraq refuted the thesis about the death of engineering equipment. Modern armed forces, like thirty years ago, need a variety of engineering assets, including pontoon parks.

Our military coped with the construction of a bridge over the Euphrates in three days, and this is taking into account the transfer of equipment from Russia and the march through almost the whole of Syria. Militants also actively prevented the construction of a bridge - there were mortar shelling and drone strikes. But the high speed of the construction of the crossing did not allow the igilovtsa to gain a foothold and create defenses. We emphasize that in full PP-2005M was deployed thousands of kilometers only by military transport aviation. This is a clear demonstration of the unique mobility of the park. 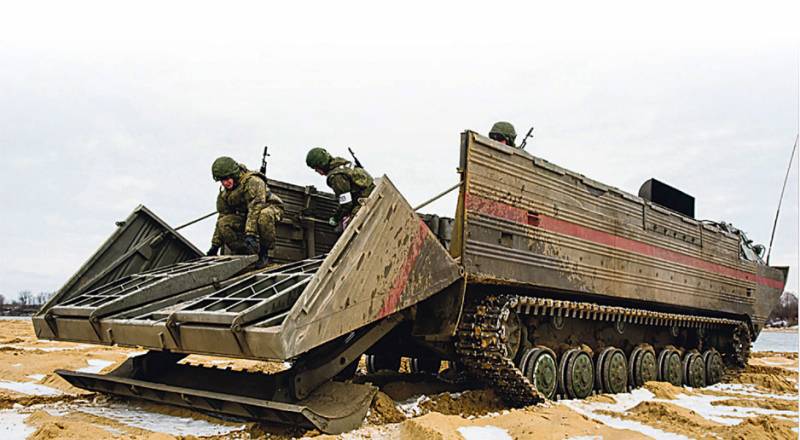 At the Army-2017 forum, Russian engineering equipment aroused the keen interest of foreign military specialists. Estimated cost, performance and features. Now, when PP-2005М showed a unique maneuverability, performance and reliability, the Russian equipment of engineering troops can become a rather popular product on the arms market.