Manpower on the killed technology 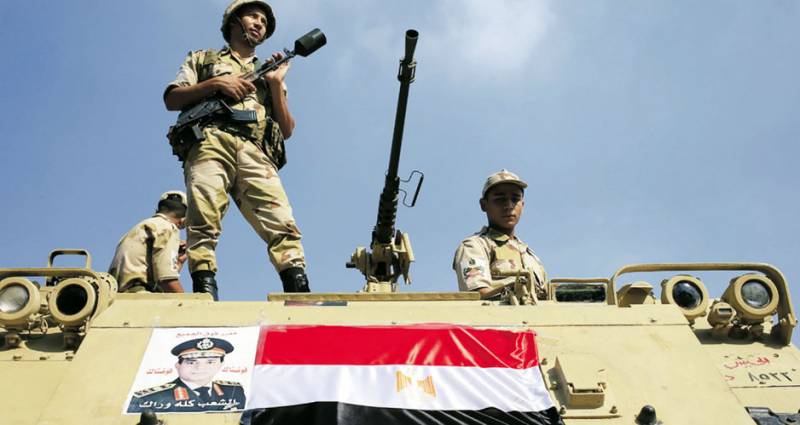 The wars with Israel, although they were all lost, gave the Egyptian army considerable experience. And today it is the most efficient of the Arab. And by the number of weapons and equipment - one of the largest in the world.

The army is recruited, while it has a very high prestige in society and a strong influence on political life, which was once again confirmed in the summer of 2013, when, with the active support of the urban population, the military overthrew the Muslim Brotherhood government.

The country is well developed by the Arab standards of the military-industrial complex, capable of producing equipment of almost all classes, albeit under foreign licenses. The country maintains exclusive relations with the United States, actively cooperates in the military-technical sphere with the main European countries, especially with France, has long-standing close ties with China and has almost completely restored relations with Russia. This makes it possible to acquire military products from everyone: apparently, Egypt is the only country procuring weapon both in North and South Korea.

However, today a significant part of the equipment used by the ARE army is seriously outdated, which is why the figures below should be considered largely conditional. Nevertheless, in the Middle East, Egypt is inferior in military potential only to Israel.
The ground forces include three field armies, each with three army corps. They consist of five armored (1-I Republican Guard, 4, 6, 9, 21-I) and eight mechanized (6, 7, 8, 16, 17, 19, 23, 36-I) divisions, as well as, in the same way, it will be out of the way to make it out of the way to make it into an allotment, and you will be in a position where you are going to be able to use it. , eight regiments of special forces.

Landing forces include 2 UDC type "Nasser" (French "Mistrals", failed "Vladivostok" and "Sevastopol"), 3 Polish TDK project 770, 9 Soviet landing craft project 106. Why Egypt "Mistrali" difficult to say (they and Russia, objectively speaking, were not very necessary). Perhaps there is excessive ambition or even direct corruption. However, it is possible that the purchase of the UDC is somehow related to the conflict between Egypt and Ethiopia, or the ships were acquired on the recommendation of the UAE, based on certain collective all-Arab actions.

Of the entire fleet, modern, in addition to UDC, can only be considered “Tahya Misr” and “El Fateh”, boats “Ambassador-3” and with reservations - frigates “Alexandria”, RK project 12411, minesweepers “Osprey”.

The coastal defenses include the 3 PU of the Italian PKR Outot, several of the Soviet SSR 4K87 Sopka, and the Soviet SM-4-1 guns.

Naval aviation has X-NUMX American anti-submarine helicopters SH-10G and 2 "Sea King", 1 French multipurpose SA-9.
Despite the archaic and not too high level of combat training of the Armed Forces, the country has no real opponents in the Middle East with the exception of Israel, with whom Egypt is no longer going to fight. In any conflict in the region, the army of Egypt will ensure the victory of the coalition on whose side it will fight. Therefore, the Arabian monarchies and seek not to miss Cairo from the sphere of influence.

After the military overthrew President Mursi, who represented the Muslim Brotherhood movement, in July 2013, Egypt completely broke with Turkey and Qatar, with whose help Mursi came to power. But Cairo was dependent on Saudi Arabia and the United Arab Emirates, since after the overthrow of the “totalitarian Mubarak regime”, Egypt’s economic situation became, as one would expect, disastrous. This dependence of the Egyptian generals was not at all pleased, because for the sake of liberation from some Islamic radicals they had to support others. After a quarrel between Riyadh and Abu Dhabi, Cairo naturally sided with the more moderate UAE. As a result, Egypt took an extremely limited part in the Yemeni intervention, and absolutely none at all in the fight against the “Assad dictatorship”. This greatly contributed to the fact that the situation in Syria was broken in favor of government forces. Egypt is rapidly returning to the number of the most important buyers of Russian weapons: the Cairo is expected to sell MiG-35 fighters, and the delivery of attack Ka-52 helicopters has already begun. This is an additional guarantee that the strongest militarily Arab country will not take the side of anti-Russian forces in the Middle East conflict.

Ctrl Enter
Noticed oshЫbku Highlight text and press. Ctrl + Enter
We are
Green banner over the "New World". Radical fundamentalism in american politicsBashar al-Assad: In Syria, not the “revolution” that the enemies are talking about, but the revolution of the army and the people against terrorists
Military Reviewin Yandex News
Military Reviewin Google News
18 comments
Information
Dear reader, to leave comments on the publication, you must to register.