October 13 2017
54
The 116-Nobel Week has gone out of the table, presenting to humanity the authors of outstanding scientific discoveries in physics, chemistry, economics, physiology and medicine, advances in literature and the promotion of world peace. Everything, as bequeathed by the great Alfred Nobel. The blissful picture has already been spoiled by the obvious commitment of the Nobel Committee awarding international prizes. He once again noted his political predilections, somewhat distorting the scientific and humanitarian picture of the world. 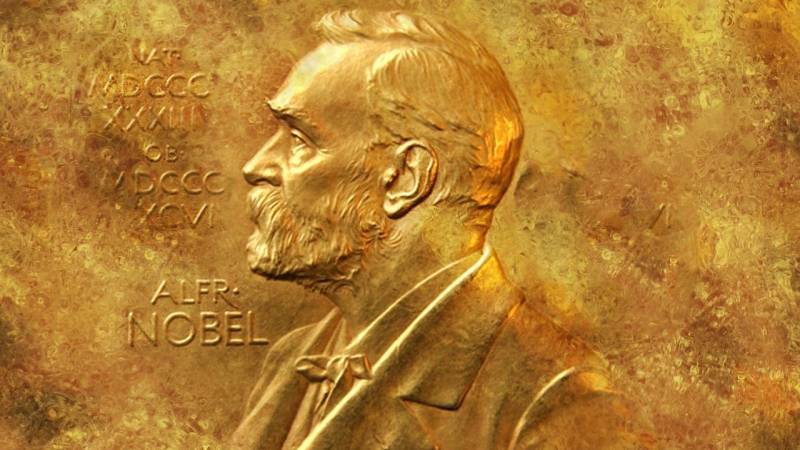 Disputes in which scientific truth is not born

In recent years, the decisions of the Nobel Committee often cause controversy. The prejudice of the performers of Nobel's will becomes obvious to the world community. It manifests itself in different ways. For example, when awarding prizes in the field of exact sciences, where, it seems, there can be no different interpretations, the committee manages to ignore the pioneers of those discoveries that are now consecrated with a prestigious prize.

It happened today with a prize in physics. Three American scientists became its laureates “for their significant contribution to the LIGO detector and observation of gravitational waves.” This news surprised President of the Russian Academy of Sciences Alexander Sergeev. According to Interfax, the president of the Russian Academy of Sciences believes that among the Nobel laureates for detecting gravitational waves, of course, should be our famous academician who is now alive Vladislav Pustovoit.

The fact is that even in 1962, the scientific work of the Soviet scientists Pustovoit and Herzenshteyn was first described how to detect gravitational waves with a laser. Americans, on the basis of the already accessible scientific community to the principle formulated by Soviet physicists, built an observatory of the LIGO project.

Moreover, two Russian institutions took part in the LIGO project - the Institute of Applied Physics of the Russian Academy of Sciences and the Lomonosov Moscow State University. However, the prize was awarded only to three scientists from the United States. Academician Sergeev believes that Americans deserve the prize. But their work was largely provided by Russian scientists. They said “the first word”, how an installation should be organized for detecting gravitational waves using light, and even helped with the implementation of the LIGO project.

This is not the first case of the “inattention” of the Nobel Committee to the works of Russian scientists. Noticeable, however, only to people immersed in science. The general public follows the prizes in the field of economics, literature and promoting peace more. With the economy, everything is clear.

This award was attached to the "Nobel" in 1969 year at the initiative of the Bank of Sweden. Officially, it is called the Alfred Nobel Prize in Economics. In fact, this nomination stimulates global economic initiatives. It is not by chance that American economists of very different directions have long and firmly straddled it.

This year, the Nobel Prize in Economics was awarded to the professor of the University of Chicago Richard Thaler. Thaler is one of the founders of a new popular trend in economic theory - behavioral economics. In this theory, more psychology than the economy itself.

It is often and deservedly criticized. Nevertheless, the Nobel Committee considered the theoretical work of Richard Thaler worthy of a high international award. He may have succumbed to the influence of the columnist Bloomberg Kass Sunstein, popularizing behavioral economics. Surprisingly, many people found the connection between Thaler’s ideas and the activities of government officials around the world.

According to the columnist Bloomberg, the authorities "use his (Thaler - Ed.) Discoveries to increase pension savings, reduce poverty, increase employment, make roads safer and improve people's health." Examples of the practical value of the theory of Thaler Sainstein did not cite. It remains to believe the word, which, apparently, did the Nobel Committee.

Let's leave out the review literature premium. In Russia, a quite definite opinion was formed about her, after this award was awarded to our compatriots, who were marked not so much by literary talent, as by a critical pro-Western view of their country. Let's talk about the Nobel Peace Prize.

Philanthropist Alfred Nobel put the world ministry on a par with the most outstanding scientific discoveries. The Nobel Committee on this nomination has its own opinion. His position led to the fact that in recent years there has not been a single laureate of an award who has received the recognition of a peacemaker from most of the world community.

Suffice it to recall the award of the Nobel Peace Prize to United States President Barack Obama. His “peacemaking” activity is still haunting the Middle East, North Africa, Central Asia and other hitherto hot spots on our planet.

Last year, the Nobel Committee among the main nominees for the Peace Prize included White Helmets, positioning themselves as an organization for the protection and rescue of civilians in Syria, providing them with emergency medical care. In the West, this message of “helmets” was accepted and unconditionally recorded by them to the peacekeepers.

The local media like to publish information about the rescue of tens of thousands of peaceful Syrians from the "barbaric bombings" of the Russian HVAC distributed by the "White Helmets". Actually, the “helmets” became more active when Russia came to the aid of Syria from the threat of Islamic terrorists.

At this time, "White Helmets" became famous for staged photo and video materials, exposing the terrible consequences of the Russian bombing. Soon, some of these materials were recognized as fake, speaking in Russian, - outright lies. The other part - did not carry evidence that the source of the Syrians' suffering was the Russian aviation.

But it turned out that the "White Helmets" actively cooperate with terrorists from the Al-Qaida Syrian branch of the "Front al-Nusra". It got to the point that in eastern Aleppo the headquarters of the "helmets" was in the same building as the headquarters of "al-Nusra." This allowed the experts to call the “White Helmets” the PR department of the “Al Nusra Front”.

In the end, the Nobel Committee faltered and left the "helmet" without a prestigious award. However, he retained them among the nominees-favorites for 2017 year. Only the yard has already blown other winds. The sick Syrian theme was overshadowed by the nuclear ambitions of the North Koreans and the response aggressiveness of US President Donald Trump.

New political trends have shifted the attention of the Nobel Committee to anti-war organizations. On Friday, he announced that the Nobel Peace Prize had been awarded to the International Company for Waiver of Nuclear weapons (International Campaign to Abolish Nuclear Weapons, ICAN).

An explanation to the press was given by the chairman of the Norwegian Nobel Committee, Berit Reuss-Andersen. According to her, the award was awarded to ICAN "for the work of drawing attention to the catastrophic consequences of any use of nuclear weapons, as well as for innovative approaches to achieving a ban on such weapons on the basis of treaties."

ICAN was created in 2007 year. For ten years, conferences were organized at the Geneva headquarters of the organization, appeals were being prepared and calls for the creation of a global legal base for the complete prohibition of nuclear weapons. This work has led to the unification of the ICAN anti-war organizations around the world.

Members of the association did not conceal that they could repeat the example of the International Movement for the Prohibition of Anti-personnel Mines (ICBL). This organization manifested itself in the nineties of the last century. For five years, it has formed an international platform to discuss the mine action theme. The ICBL has even attracted the Government of Canada to its orbit.

With it, at the end of 1997, the Ottawa Treaty on the prohibition of anti-personnel mines was signed. For this, the ICBL received the Nobel Peace Prize. Meanwhile, the contract was broken. It was not signed by 35 of large states, including India, China, Russia and the USA. According to experts, a real reduction in the number of victims of anti-personnel mines was not achieved. After receiving the award, the ICBL sharply reduced its activity.

Now the company has taken the same path to abandon nuclear weapons. ICAN was able to enlist the support of not only international organizations, but also prominent public figures. Among them - the former UN Secretary General Ban Ki-moon, Dalai Lama XIV, South African human rights activist Desmond Tutu and other significant figures.

On their initiative, last November, the UN created an ad hoc working group on the preparation of a treaty on the prohibition of nuclear weapons (JNW). Now, at the end of September, it has been opened for signature. In two weeks, 53 states joined the treaty, and three (the Vatican, Guyana and Thailand) had already ratified it.

Outwardly, it seems that the global coalition of civil society has made a breakthrough on the most important issue of international security. Just something cautious experts. They consider the actions of the Nobel Committee and the ICAN itself as a political conjuncture.

The official structures of the leading states of the world could not refrain from sharp assessments. The US Department of State, for example, called the JANO agreement worked out with the participation of ICAN as "irresponsible" and "counterproductive." Speaking at the UN General Assembly, Assistant Secretary of State Anita Friedt noted that the situation around the DPRK nuclear missile program shows the need for a nuclear deterrent tool.

The Russian position in an interview with RVC was outlined by Mikhail Ulyanov, Director of the Foreign Ministry’s Nonproliferation Department. According to him, the ZNO does not meet the interests of the national security of Russia, as it may be detrimental to the work on controlling nuclear non-proliferation.

Experts explain the situation with the ZNO more readily: "Today, nuclear weapons are the last factor in deterring the world war, much more ambitious than the first and second world wars." This opinion is shared, in particular, by the chairman of the editorial board of the journal Russia in Global Affairs, a world-class international scholar, Sergey Karaganov.

“Nuclear weapons are terrible,” Karaganov said at a meeting at MK. “However, people who kill without any nuclear weapons are even worse.” Meanwhile, this is exactly what happened in the recent past, when the nuclear deterrence factor has weakened. ”
Sergey Karaganov cited the example of 1990's experience — the beginning of 2000's, when reducing “the threat of using nuclear weapons as a deterrent factor in the rivalry between the two leading world superpowers ... led to a whole series of military conflicts resulting in massive human casualties.”

Such a unity of assessments of experts and officials shows that awarding the Nobel Peace Prizes is gradually becoming a thing in itself, serving the parallel political world, more focused on receiving awards than on solving global problems of mankind. And this does not add credibility, but, most likely, reduces the significance of the most prestigious international award.