October 15 2017
25
The other day, the Public Diplomacy Bureau of the US State Department posted on the portal of government grants an announcement of a future project to “train independent journalists,” in which media workers will be invited to the United States. The main emphasis is made, of course, on Russia and the post-Soviet space. 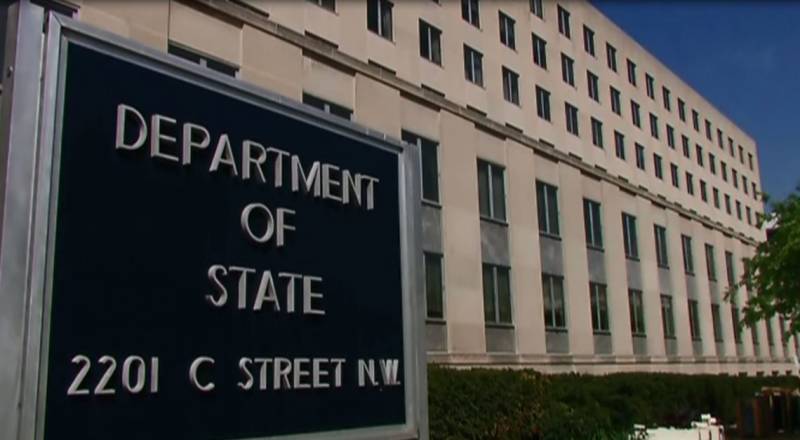 What for? As officially stated, journalists will be trained “according to the program of international media reporters to familiarize themselves with the goals of American foreign policy through direct communication with members of Congress, government officials, and the business community; for participation in specialized briefings and seminars ". The program also explains the “true motives of American foreign policy”, as well as the promotion of “standards of objectivity”. The project will be implemented on the basis of the so-called press centers for the foreign press, which are a structural subdivision of the State Department and are intended to form a “loyal to the American authorities” foreign press pool. But in fact, of course, in order to form a “fifth” of them, or rather, an “information column” within the Russian media.

A contract has recently appeared on the official website of the Broadcasting Board of Governors of the USA (BBG), the purpose of which is to find a company that can train employees of the holding to work in social networks with the Russian-speaking population to counteract "Russian disinformation." The course is intended for reporters, editors and managers of Voice of America, working for the Russian audience.

The BBG financial report on 2017 year also suggests an increase in the number of digital media in those regions with which the Russian government is in the “frozen conflicts” stage. The board of directors asks to pay special attention to “influential young users” in the Russian Federation. This will be allocated a special budget.

As a matter of fact, the West has been engaged in the formation of the “information column” in Russia for a long time. Funding for journalists loyal to him in Russia through grants, internships in the United States and in Europe with the help of direct bribing began with Gorbachev's perestroika. One of the first among these was the chief editor of Ogonek magazine, Vitaly Korotich. Born in Kiev, the author of enthusiastic poems about Lenin, which allowed him to become the head of the Writers' Union of Ukraine, was in Moscow at the head of the main media rebuilding. "With his arrival, the magazine turned to 180 degrees, - then summed up the" Spark "- It is difficult in the world stories Recall a publication that would have the same strong influence on the political life of the country as the “Light” of the era of perestroika. “Ogonyka” publicism became a school of democracy in a starved country for freedom. ”

It was “Spark” that became the main mouthpiece of the liberals over the collapse of the USSR. In the US, it is immediately appreciated. In 1989, the American magazine Ward Press Review awarded the werewolf the title Foreign Editor of the Year. 19 August 1991 of the year, while in the States, Korotich handed over a flight ticket to Moscow and stayed for permanent residence in the USA, where he was “given merit” to the collapse of the USSR and was given a satisfying position as a teacher at Boston University. And when in the United States he was already fed up with many, an experienced propagandist-Russophobe was sent to Ukraine to prepare Maidans, having attached to the newspaper Gordon Boulevard.

As we remember, the editor-in-chief of the newspaper Moskovskie news»Yegor Yakovlev. Like Korotich, he also turned out to be a werewolf. Born in the family of the Chekist, the author of the fiery book about Lenin, “Holding a Soul by the Wings,” when he saw a change, immediately reborn, left the CPSU and became one of the most active gravediggers of the USSR in the media. In the 2000-ies, when all the masks were already dropped, Yakovlev led the author's programs on the American Radio Liberty.

In the same years, Vladimir Pozner, another guru of liberal journalism, gained popularity. For Americans, he was his own. Born in Paris, studied in the USA, he still has two international passports - American and French.

Like his other liberal colleagues, Posner also turned out to be a flippant. At the time of the USSR, he was secretary of the party committee at international broadcasting, and then instantly became a registered liberal. And he was immediately invited to the United States, where he worked under a contract on television from 1990 to 1996 year.

And when the interest in America to Russia in those years waned, Pozner returned (or maybe was sent?) Back to Moscow, where he was given a highly paid job as a columnist.

Curious is the biography of Alexei Venediktov, editor-in-chief and co-owner of Echo Moskvy, the current leading media liberal. His grandfather is a military prosecutor, member of the Military Tribunal. From the official submission to the Order of the Red Star: “Comrade Venediktov [...] directs punitive policy to a merciless fight against traitors, spies and traitors of the Motherland. Dozens of traitors were convicted and received a well-deserved punishment. He was merciless to the enemies of the Motherland, and teaches peripheral workers Tribunals. Strikes against criminals are acute. With its judicial punitive policy it contributes to the strengthening of iron military discipline. "

But his grandson Alexei Venediktov was in our times on the other side of the barricades. When in 2002, he created a new talk radio, Arsenal, it was reported that American funds and some of George Soros’s structures would invest in the project. In 2008, Venediktov received an award from the International Press Club of America. And besides, for his zeal he was awarded the highest orders of Russophobic Poland today, as well as France.

Dmitry Muratov, head of the liberal Novaya Gazeta, was financed from overseas. At the start of 2000, he received 100 thousand dollars from the Open Society Institute, a unit of the Soros Foundation. 3 December 2007 in New York Muratov called on US companies to give money to Novaya Gazeta directly: “Change your advertising policy. Work with us directly. I will give you discounts! You will do well ... "

A television observer so popular in the past, like Yevgeny Kiselev, who fled to Ukraine, where he is now conducting violent Russophob propaganda, has stayed in the West. In the USA, he was awarded the prize “For Press Freedom”, and in Estonia - the Order of the Cross of the Land of Mary.

“Fury of liberal journalism” Yevgenia Albats, editor-in-chief of the Russophobic magazine “The New Times” and part-time Echo of Moscow columnist pay generously paid from abroad. In 1990's, she received Alfred Friendly's scholarship (in the USA), and then the Niemann scholarship at Harvard.

And the publisher of her newspaper, Irena Lesnevskaya, became the Chevalier of the French Order of the Legion of Honor.

The merit of another “fury” of liberal journalism, Echo of Moscow columnist Yulia Latynina was noted by Condoleezza Rice herself, when she was US Secretary of State. Latynina received from her hands the State Department Award "Defender of Freedom" - 50 thousand dollars.

The furious Russophobe Matvey Ganapolsky, who escaped to Ukraine from the Echo of Moscow columnist, receives money from the United States. According to the online publication Life, he received money (12 800 dollars), in particular, from the US state propaganda agency BBG. An independent journalist from Novaya Gazeta, Alexander Panov, who works as his own correspondent for the newspaper in Washington, also feeds from the same agency. From the aforementioned BBG, he received about 67 thousand dollars. This is confirmed by open data from the US government procurement website. By practicing money, Panov is engaged, in particular, in publishing mocking comments on the Russia Today TV channel. This list of members of the West-funded "information column" can be continued.

Gifts from the oligarchs

Many liberal journalists got rich back in the 90s thanks to non-performing loans that the oligarchs gave them, in particular the runaway Vladimir Gusinsky and his media group Most. Thanks to these loans, which were, in fact, a simple transfer of money to especially loyal journalists, many of the current opposition members have acquired luxury housing in the capital. And completely free.

According to media reports, these fictitious “loans” were repaid in two ways: the entire loan was repaid at the expense of the holding under various financial schemes during the contractual period, although the documents usually indicated that the recipient paid the loan; repayment of the most part of the loan by the holding, and the rest - by the beneficiary. Upon dismissal, the preferential scheme was turned off, and the remainder was paid in full by the debtor at the time of termination of the contract. But the borrowers worked on the Gusinsky Empire to the last. Until the oligarch repays their loans.

The money for the purchase of real estate in the form of fictitious loans for the employees of "Mosta" was allocated from the credit funds received by the group. Such loans were issued during all the years of existence of the Media-Most holding. By the way, Gusinsky didn’t return these debts to the state - he fled abroad, and it turns out that the recipients of loans got rich with practically stolen money.

In the list of those who received such uncollectible money from “Most”, the names of many of the current “stars” of liberal journalism. Like, for example, Vladimir Kara-Murza, as well as the aforementioned editor-in-chief of Ekho Moskvy, Alexey Venediktov, who received over 183 thousand dollars from Gusinsky.

The most funny thing about this ugly picture of bribing by the West and the home-grown oligarchs of liberal journalists is that recently they have all suddenly become fierce “fighters against corruption”, exposers of “illegal incomes” of officials, “rotten authorities” ...

But the main problem is that even in the government structures, it seems, they still underestimate the danger of the “information column” marching through Russia. They say it’s even good, evidence of our “freedom of information” and “pluralism of opinions”. But Napoleon said that one hostile newspaper is more dangerous than a hundred thousandth army. And if this is not one newspaper, but a powerful “fifth column” of the media, which is being educated, financed, and set the West and homegrown oligarchs against Russia? Do we not know what a destructive role the liberal press played in the collapse of the USSR and the Bandera coup in Ukraine?

Ctrl Enter
Noticed oshЫbku Highlight text and press. Ctrl + Enter
We are
List of destroyed the largest and most high-tech enterprisesMilitary reform as an integral part of the security concept of the Russian Federation: Systematic dynamic assessment
25 comments
Information
Dear reader, to leave comments on the publication, you must to register.