100 years of soldier glory. Preface to the First World War 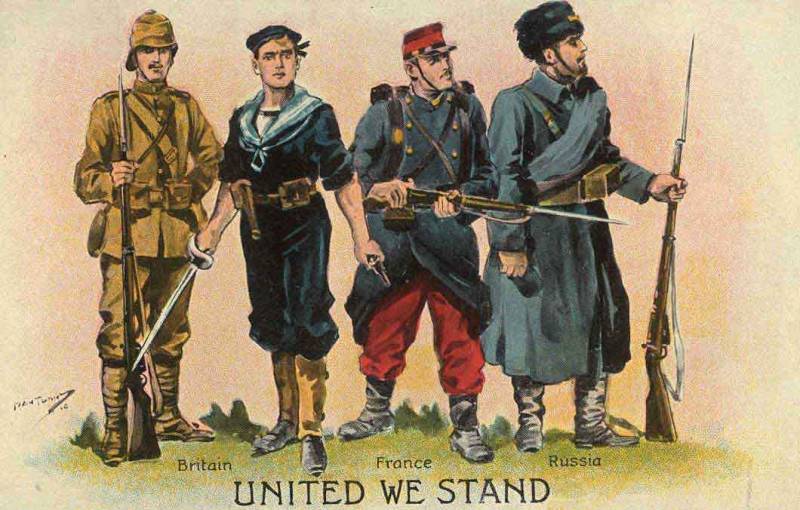 What does an average citizen in the post-Soviet space know about the First World War? Yes, actually nothing. In Soviet times history, as they said, “imperialist war” completely covered the history of the Civil War.

And the reasons, the reasons, the course of the largest conflict of the beginning of the century, little attention was paid. This practice essentially continues today. We have the Great Patriotic War. Point. Although, in principle, even with her really have not figured out. But at least books are being written and films are being made. The quality is worth keeping silent, but it's better than just a vacuum.

About the First World virtually nothing, or again, all within the framework of the Civil War. There was, say, an "imperialist" war that spilled over into the Civil War, and everything became good. All won.

At the same time, this military conflict directly affected the western lands of the then Russian Empire. The fighting went on the territory of Poland, Ukraine, Belarus. A part of the territories was lost and occupied, which later gave rise to the Soviet-Polish war, but we'll talk about this some other time.

Today I would like to tell you where the legs of an event from one of the most terrible people who turned the worldview and which led to even more terrible - World War II grow from.

Please remember this postulate. It was the results of the First World War that gave birth to the Second.

Let's start, perhaps, with the fact that progressive Europe constantly fought, not only with the colonies, but also with itself. Then you and the war for the Spanish inheritance, and the Seven Years War, and the Napoleonic wars, and many other conflicts. The European powers then fought each other, then entered into alliances, in general, there was a normal "civilized" life.

It should be understood that 1 August 1914 of the year, that is, the official beginning of the Great War, did not happen just like that, no one snapped his finger and did not call for a pike or a genie for everything to start, this process was quite long. Just over 40 years. Why is that? It's simple.

To begin with, the murder of the archduke is not a reason for unleashing a world war. This is an excuse. And an excuse, rather well formed, for there was no worse place for the visit of Franz Ferdinand than Sarajevo. And time could not be worse.

Or - it is better if we proceed from intentional provocation and the creation of a preposition. What actually happened.

But unscrew the wheel of history a little back.

By the time a new state appeared on the map of Europe. German Empire / German Reich / Second German Reich.

It is worth explaining that the Germans considered the First Reich to be the holy Roman Empire (962-1806), which included Germanic lands in its heyday. About the Third Reich, I think, no need to explain.

The new German Empire appeared like an elephant in a china shop, defeating the French near Sedan and proclaiming its creation in the Hall of Mirrors of the Versailles Palace.

And then it was not even politics that began, although nobody expected such agility from the German principalities. But the German ace ace Otto von Bismarck played his game beyond praise.

As a result, the newly-minted German Empire not only won, selected Alsace and Lorraine, but also greatly humiliated France, which until that time was in fact the hegemon in continental Europe. But politics is not the main thing, the main thing is the economically very rich areas inherited by Germany.

It is logical that the next year, 43, France was looking for opportunities for revenge. An important factor was the time that Germany was late to the redistribution of the world and, unlike its future opponents, did not have extensive overseas colonies.

And the colony is at that time a very decent engine for the economy. The German political and economic elites considered their inclusion in the process of plundering the rest of the world quite logical, as the UK, France, Spain and Portugal have been doing for hundreds of years.

But these guys did not want to share. What was left to the Germans? Start your expansion, support the opponents of your opponents and stuff like that. For example, during the Anglo-Boer War of 1899-1902, Germany supported the Boers. The Germans almost immediately began to carry out attempts to penetrate the "zone of British interests" in East and South-West Africa.

In this regard, the British deviate from the policy of "brilliant isolation" (the essence of which was to refuse to conclude long-term international military-political alliances in the second half of the XIX century) and begin the formation of the Entente, a union directed exclusively against Germany.

With France, things were virtually the same. The third republic suffered greatly from the economic expansion of Germany in the territories of its colonies and its usual sales markets. German goods were just better at a comparable price to the French.

And France could not solve this problem in a simple, that is, military way. There was a real threat of a repetition of the Franco-Prussian war, in which the French suffered a sensitive defeat. In this regard, the two once irreconcilable adversaries, the United Kingdom and France, are beginning to draw closer to each other, seeing in Germany a common enemy.

Moreover, Kaiser Wilhelm II did everything and even more to make it happen.

There were contradictions of the Second Reich with the Russian Empire. This and the construction of the railway line Berlin - Baghdad, which, in the opinion of St. Petersburg, threatened Russia's legitimate interests in the Balkans. Plus, Germany’s support of Turkey, which has been trying to squeeze Constantinople for more than one hundred years and to take control of the Bosphorus and Dardanelles straits, both Russians and British.

In the Balkans, in connection with the weakening of Turkey, Serbia and Bulgaria began to butt. Both countries had significant political ambitions and sought to take a leading position in the region. And the Bulgarians also managed to suffer a defeat from the Serbs and Greeks a year before the First World War, and this wound was fairly fresh. In general, wherever you go, at that time in Europe there are only continuous contradictions and claims.

Meanwhile, at the very beginning of the century, a number of military and political conflicts occurred. This is the aforementioned Anglo-Boer war, and the Russo-Japanese war, in which Great Britain actively helped Japan in order to weaken Russia, which, in turn, threatened British interests in Central Asia and the Far East. The two Balkan wars, 1912-1913, and two Moroccan crises, where France and Germany clashed for control of Morocco.

And the knot of contradictions in Europe that emerged by July 1914 in Europe could actually be cut only by a blade called “war”.

War wanted everything. Germany needed new lands. France and Britain had to short out Germany, which was too eager to take up the construction of the empire. Austria-Hungary, Serbia, Bulgaria, too, were absolutely not against the "return of their", previously lost. The Ottoman Empire, having suffered great losses as a result of the Russian-Turkish wars, pursued a revanchist policy.

There were too many mutual claims and, most importantly, political and economic desires. The war for the redivision of the world was simply inevitable, the question was only behind the excuse.

The paradox is that there were no territorial claims in terms of colonies or in Europe. The Russian Empire had no colonies at all, and didn’t really need them. From here the political and economic interests of Russia lay in the south and east.

Russian interests in the Far East were badly undermined by the Russian-Japanese war, but the question remained open. In the south, the “cherry on the cake” was the Turkish straits, the Bosphorus and the Dardanelles, for the sake of which Russia could get involved in a world war. Moreover, such plans took place to be, and they were realized two months after Germany and Austria-Hungary declared war on Russia.

It’s impossible to say that Russia really wanted to participate in that war. Nicholas II, we must give him his due, for his part he did everything to prevent war. However, Kaiser Wilhelm II did not even respond to the proposal from the Russian emperor to transfer the investigation into the events in Sarajevo to the Hague Conference.

All too needed this war.

But the Russian autocracy also needed it. And necessarily victorious war. It was a victory in the war that could really strengthen the power that was somewhat shaken as a result of the failures of the Russian-Japanese war and the events of 1905.

Plus, the reason for the war was simply superbly implemented. It would be possible for some time to play up in front of the allies, delaying Russia's entry into the war. But Serbia, as a reason, is just elegantly played. The attack on the old ally of Russia, for the help of which the grandfather of Nicholas II, Alexander II, received the honorary nickname "Liberator" (yes, and for the abolition of serfdom, but this is an internal matter, and in Serbia, following the Russian-Turkish war 1878, he was called so), - this was the reason that it was impossible to shut up.

The whole problem of the then Russia was that the empire clearly followed its allied obligations.

Do not enter Russia on the side of the Entente on the European theater of operations, the outcome of the war could have been quite different. The straits would be in Russia and (possibly) in Serbia and Bulgaria, and the Germans would once again have drunk in Paris. The British would have stayed behind the English Channel, and what allies and fighters from the Italians, it is not even worth talking.

But this is from the field of alternative fiction, and in August 1914, the Russian army began its war. While on one front, the second was open only in November.

We will talk in detail in the next article about what the Russian imperial army was like in 1914.

Ctrl Enter
Noticed a mistake Highlight text and press. Ctrl + Enter
We are
Chernobyl notebook. Part of 3The hunt for the Blackbird
26 comments
Information
Dear reader, to leave comments on the publication, you must to register.