Tanks in the Nivelle Battle. Part of 2


The division moved along the stream, then turned to the Moshan farm and lined up in battle order to attack the Würzburg trench. But because of the difficulties of the terrain, he re-arranged himself into a column, and, although the tanks took a distance of 30 meters, the movement was so slow that in the end they were knocked together in a single passage through the trenches. At this time, the German artillery doubled the intensity of its fire and quickly shot at the tanks - from 11 machines 10 was disabled. The last tank, convinced of the inertia of the infantry, turned back.

Capt. Forsantz's 4 Division, due to the highway clutter, was able to perform only in 7 hours of 20 minutes (i.e., later 50 minutes after the avant-garde part). Arriving at Kohler, the division divided into two columns and moved along the trench of the "Saxon King". By the 15 watch 30 minutes he got to the second German position. The German counterattack forced the French infantrymen to rush back, but the tanks advanced, detained the enemy and threw him away. The 5 tanks moved forward, but German artillery fired at them, which was on the left bank of the r. En and small-caliber gun, pulled by the Germans by hand from the park Ginvakur. Very quickly, the 4 of the tank was put out of action, and the division, fired by artillery and machine-gun fire from the front and flank, was forced to withdraw.

Of the group's 82 tanks, which had come out of their starting positions, they remained “on the ground” 44 (of which 31 was disabled by enemy fire), and 38 returned back. Personnel casualties: 26 officers, 20 non-commissioned officers, 83 foreman and privates. 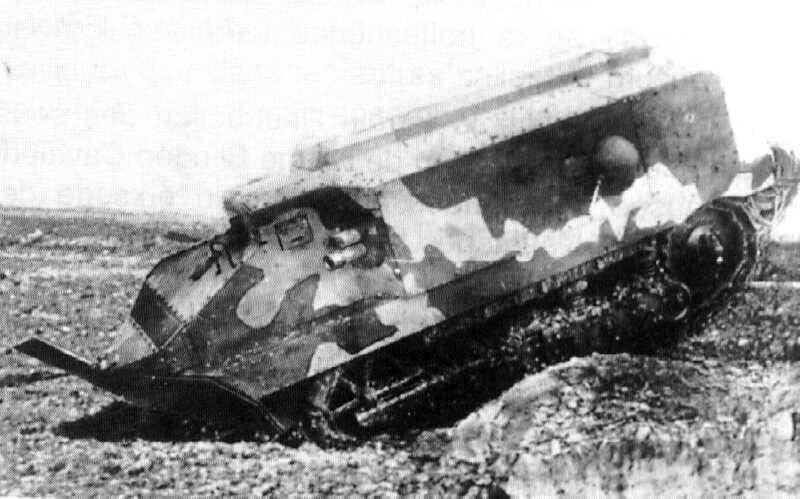 The Shabe group came up from the 20 30 15 X-hour collection hours of April on the eve of the offensive, and arrived at a wait-and-see position by the 6 hours of the next day. But the 8 tanks of the 8 division were stuck along the way - when going through a swampy terrain.

Captain Balti's 3 Division was immediately spotted on leaving the grove by German aircraft firing flares, and German artillery opened fire. As in the Bossu group, the infantry, which began to suffer serious losses, scattered in different directions.

In 6 hours 50 minutes the division reached the advanced French trench, the transition through which was not yet ready. This first stop cost the division two tanks, disabled by artillery fire of the enemy.

Finally, the first machines succeeded in moving their trench, and in 7 hours of 15 minutes they approached the Germanic trench. Here the situation was even worse: the trench was an obstacle with a width of 4 - 5 meters and a depth of 3 - 4 meters. Several escort infantry groups worked diligently on the transition unit.

The enemy artillery weakened the fire - the tanks were partially hidden from its observers. But as soon as any fighter left the shelter, he immediately mowed down the fire of German machine guns.

The approach of the next division caused an increase in enemy fire, and several tanks were disabled - including the tank commander of the division. Four tanks caught fire - their crews carried machine guns out of the cars, descended into the trench, and opened fire on the enemy, acting together with the infantry of the 89 regiment.

Time went by - it was already 20 hours, and the transition was not yet ready. Captain Balti decided to divert the remnants of his division to the Bomara grove, but the movement revived the enemy fire - and the 5 tanks that were left behind were set on fire, and the latter was stuck in the swamps of Pluayon.

Capt. De Bouazhelen's 7 Division followed the 3 Division and, so that the machines would not be crowded, the commander ordered his tanks to echelon to the left. The maneuver was unsuccessful: as soon as the tanks of the 7 Division were in the field of view of the enemy artillery, located near Craon, Chevre and Korbeni, several vehicles were disabled.

The division commander ordered a retreat to the forest, keeping wide intervals between the vehicles. 5 tanks reached the forest, and 11 remained in the field (7 of them were engulfed in flames).

The 8 Division of Captain de Blix, who had only 8 tanks left, followed at the tail of the column. Arriving at 7 clock on the line of the farm of the Temple, he came under heavy artillery fire from the enemy.

In 7 hours 45 minutes, barely past the French trench, the division was forced to stop behind two heaped-down divisions.

If the 7 division rushed to the left, then Captain de Blick tried to move to the right - but at wide intervals.

But, seeing that this maneuver would not be effective, he ordered the senior commander of the batteries to withdraw the tanks to the shelter, while he himself went on reconnaissance.

But during the retreat, the tanks were bombarded by German shells - and only four managed to escape in the woods.

Of the 50 tanks of the group that had been moved into battle, 18 remained intact, and 32 remained in the area (of which 26 was broken by artillery fire). Losses in personnel: 7 officers, 8 non-commissioned officers, 36 foremen and privates.

Since the April 16 battle did not bring the results that the command was counting on and on which the plan for using tank units was based, the latter’s participation in this battle was largely compromised.

Tanks were supposed to be just a tool for developing initial success. But since he was not reached, he had to enter the cars into battle in the current situation, impromptu. 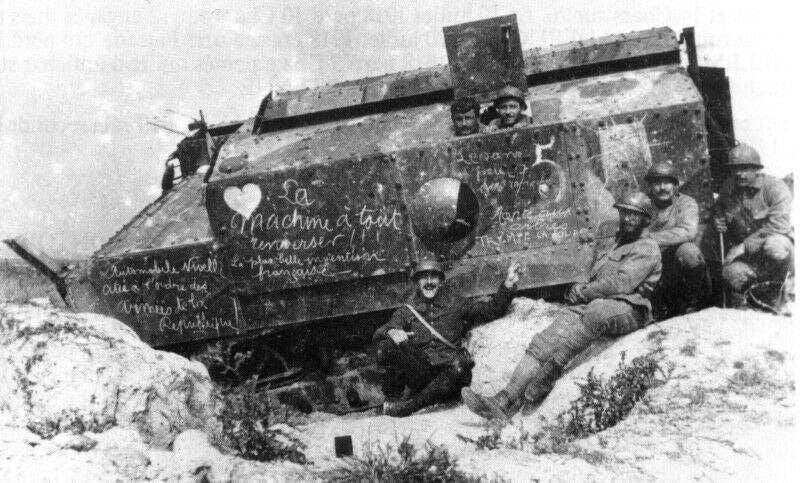 The participation of the French tank units in the Nivelles massacre is very revealing and makes it possible to formulate some conclusions partially explaining the tactically colorless result of the first day of the offensive, both for tanks and for the infantry that interacted with them.

Initially, the tanks were late, violating the agreed schedule.
The slowness of the advancement of tanks, an abnormally large number of delays in transit also played a significant role in disrupting the attack.

But there was enough time for reconnaissance, routes were chosen in advance, people were selected to organize transitions through the trenches. But when the divisions approached the first points of transition, the work had just begun - and the divisional commanders had to, as best they could, get out of their “bottles” into which the crowded tanks landed in a hail of shells. Crews themselves often got out of their cars, trying to equip transitions, and the escort infantry were too few for solving the tasks set - especially as the enemy’s barrage caused her frustration - both in front of the Tample farm and in the Kohler farm. Tanks trampled on the spot, representing easy prey for enemy artillery.

Captain Shanuan, replacing Major Bossu, wrote in his report: "The escort infantry, which was supposed to pave the way through the shells dug up with shells, did not fulfill its task."

Major Shabes wrote: “The trench is not moving; the escort infantry that came under artillery fire dispersed along the message lines and it was not possible to join it. ”

The task of the escort infantry was clearly underestimated. On the terrain, pitted with shells, turned by rain and snow into a marsh, the advance through trenches and communication tunnels could not be provided by several weak infantry units. It was necessary to take into account the fact that from time to time squalls of enemy artillery fire would interfere with the workers and reduce their productivity.

The interaction of tanks with infantry was also extremely weak. So, when the tanks moved to the third position between pp Miet and En, the infantry did not follow them. She never caught up with them in the afternoons, when a lot of cars were operating near enemy positions.

The infantry did not know how to fight together with tanks.
Marines hiding in the craters of the shells and in the German trenches, never thought about using the success achieved by tanks. But the tanks themselves are not able to hold the captured space. Like cavalry, light tanks swept through the enemy's position, but only infantry could clear and occupy the latter, as well as withstand the enemy’s counterattacks and develop the success achieved by the tanks.

The constant vigilance of the infantrymen, the determination of the commanders of the units and subunits interacting with the tanks, were an important key to success. But the development of the interaction between the infantry and the tank crew was not carried out.

No attention was paid to the protection from enemy artillery fire. After all, the tanks - clumsy mastodons - could not heal, representing a very visible target, attracting all types of fire.

Especially scary was concentrated fire, which led to direct hits in the tanks. The infantrymen who were near them, without being protected by armor, died or fled. On April 16, French vehicles, which were discovered not only by enemy aircraft, but also by ground observation posts in Corbeni, Damari, Cloddan Grove, were taken by the German artillery into fire vices immediately, as soon as they were within reach. The counter-battery struggle turned out to be ineffective, and the Germans, choosing their targets at will, were able to alternately concentrate their fire on the tank divisions, which entered the battle at considerable intervals on a narrow front.

The tanks were in a whirlwind of ruptures - and the sight of this spectacle did not at all induce the infantry to follow them. Therefore, their successive uncoordinated attacks, one after another, failed.

Finally, after the battle, the German artillery was able to freely shoot the still not destroyed or not burned down cars thrown on the battlefield - and turn them into piles of unwanted debris.

Thus, the failure of the use of tanks in the battle of April 16 during the Nivelle Massacre was due mainly to the tactical and organizational mistakes of their use. Summing up the first experience of using tanks, the French command realized that tanks should be used on favorable terrain, with the support of infantry prepared for combat together with tanks, under the cover of other combat arms, and tanks should appear simultaneously and massively - on a broad front and on a small distance from the target of their advance. 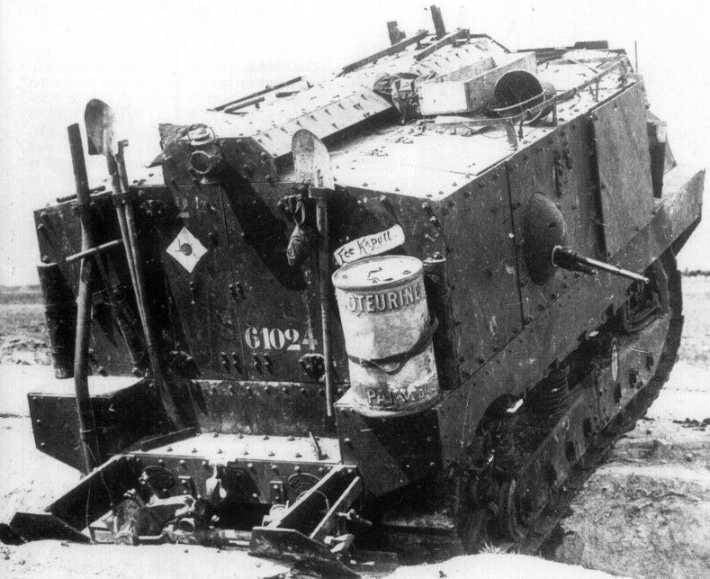