Tanks in the Nivelle Battle. Part of 1


During this period, the organization of the French tank units was as follows: the 4 of the tank was a battery, the 3 of batteries was a division; The 3 tank division of Schneider or the 4 tank division of Saint-Chamond (as a rule) together with a platoon of supply and repair were combined into a group.

The Allied command firmly hoped to break through the German front in the course of the upcoming large-scale operation. 13 March, General Michelet wrote: “The use of tanks north of r. En will allow on the very first day of the offensive to reach the most remote enemy positions. ” Indeed, only tanks could cope with new defenses, which the Germans had just finished building at the front of Berrier Grove Clandan - Ginokur (first line) and Amifontaine - Prouve - Pergiotel (rear line), which was out of reach of the French field artillery fire.

All 8 tank divisions were attached to the French 5-th Army.
The main blow was supposed to inflict 32-corps, advancing between pp Miet and En. On the left, this attack was supported by the 5 corps, and the right flank of the strike connection was provided by the r. En 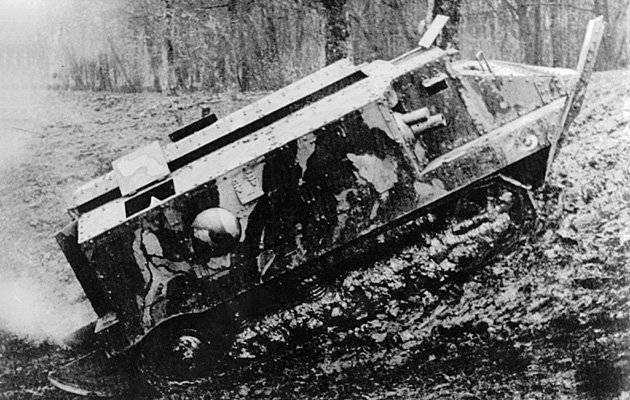 Most of the tanks - 5 divisions - under the command of Major Bossu was in the direction of the main attack. The remaining 3 battalions, commanded by Major Shabe, were assigned to the 5 Corps, supporting its left-flank 10 Infantry Division. The 5 Army's instruction established that "tanks will be used to support infantry when attacking enemy positions not affected by our artillery preparation." The instruction for the tank units of the 5 Corps prescribed: “A group of tanks immediately preceding the infantry steps into the positions occupied by the enemy, makes a passage in the wire obstacles, takes defenders under fire, and, having broken their resistance, makes way for the infantry. The latter ... rushes forward and takes possession of the position. ... provides further advancement of tanks, eliminating all obstacles in their way. "

A group of 5 infantry regiments was assigned to the Bossu group: two head divisions (154), half a pound each for the right flank divisions (2 and 9) and one company for each of the other divisions (4 and 6) th)

The 3 division of the Shabe group had to turn around in such a way as to attack the trenches "Thuringen" and "Speer", and then the terrain between Berrier and Amifontaine. To accompany the tanks, 3 companies of the 76 Infantry Regiment were assigned.

Issues of assistance to the stranded tanks, supplies and communications were debugged - companies have allocated selected fighters for each 4 tank.

In 6 hours of 30 minutes, a column of 82 tanks from the Bossu group of tanks moved to the starting position - on the highway from Pontaver to Kohler. The tanks came under fire from the German artillery firing at the squares - there were no casualties in the personnel, but the tracks of several tanks were damaged by large fragments. In 8 hours the head of the column approached the bridge over the river. Miet and to the French trenches - the tanks had to stand 45 minutes in anticipation of the construction of passages through the trenches. The escort infantry, hitting the enemy’s barrage, rushed into the message and scattered through the trenches.

In the future, tankers also experienced problems moving through an extensive system of trenches. So, when overcoming a position plot, Captain Pardon deployed his division into battle order - hitting the hail of German shells. The infantrymen, instead of helping the tanks to cross the obstacle, tried to move away from them - to avoid fragments of German shells. Crews were forced to get out of the cars and construct the crossings themselves.

At this time, the projectile gets into the tank Major Bossu - the commander of the group is killed, and the crew is disabled. 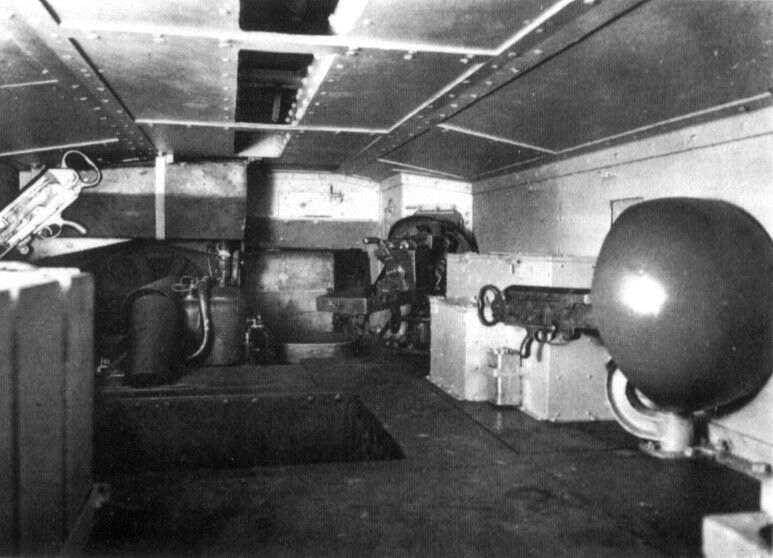 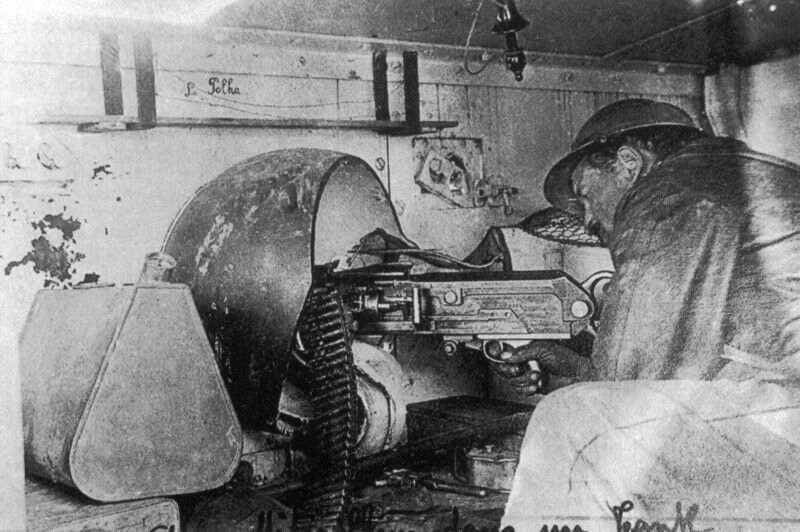 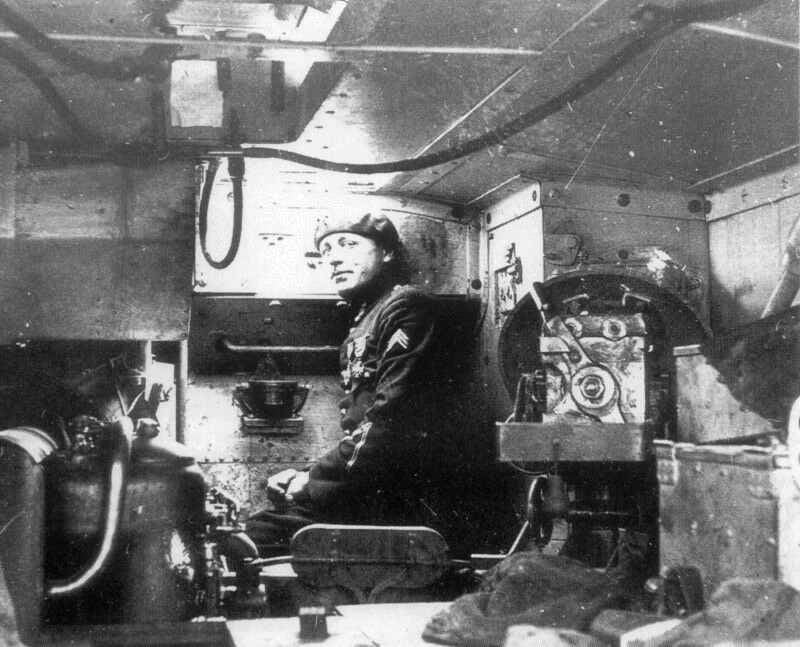 At noon, 5 tanks managed to overcome obstacles and reach the 78 hill - but in vain they gave signals, calling for help from their infantry. There were few infantrymen, and they did not dare to follow the tanks through the area of ​​fire.

13 watches 5 joined 2 to the broken tanks, and the detachment launched an offensive at the junction of the Nassau and Würzburg trenches.

But they did not have time to move up a few hundred meters, as they came under direct fire - the German batteries from. Geveenkur and Groves Klokdan. Two tanks caught fire. Just at the junction of two trenches, another 77-mm cannon, serviced by three gunners, suddenly found itself - it destroyed two more tanks. The remaining three cars moved over the crest of the 78.

Encouraged by the withdrawal of tanks, the Germans launched a counterattack in the direction of the Moshan farm - but were repulsed. The fire of the Germans intensified: several tanks were damaged, the captain died Sorry. The remainder of the 2 Tank Division was transferred to the command of the 6 Battalion Commander Captain Shanouan.

The 6 Division followed 2 at close range, and without loss reached the second German position. At 11 hours, he turned around for a fight and moved to the Nassau trench. German planes, having discovered the division, reported artillery about it, and it was covered with powerful fire. In 14 hours 6 tanks were shot down (5 of them burned out), on both banks of the river. Miet the French infantry could not move forward.

At this time, the counter-attack mentioned above began. The 6 Division supported the 2 with fire, and the Germans were scattered. But the tanks, being alone, retreated.

Parts of the 15 Infantry Regiment approached 151 for hours. It was decided to conduct a joint counterattack.

In 17 hours of 20 minutes, the tanks moved to the attack, and the crest of 78 was occupied by the French infantry.

The 5 division was also active. But immediately after crossing the river. Miet Division was hit by enemy artillery - one tank was set on fire, and two officers (including Captain Nosero) were wounded. The rest of the tanks commanded by Captain Dubois continued their advance - breaking the trenches in 400 meters north of the Moshan farm, they attack the Würzburg trench in two groups. In the center, a commander tank was moving, and in 50 meters to the right and left of it, 2 columns of two batteries each attacked.

Approaching a close distance to the target of the attack, the tanks turned into battle formation and opened fire. The enemy began to retreat, and the tanks continued the offensive, overcoming the “Würzburg” trench, and leaving 6 vehicles along the way (the rest reached the southern edge of the Klokdan grove).

The infantry fell behind again. The tanks stopped and gave her signals - from 13 to 16 hours the tanks stood in place, from time to time repeating a conditional signal. 3 vehicles were sent for reconnaissance: one to the edge of the Klokdan grove, the second east of the grove, and the third to the southeast, to the railroad.

The first two tanks were almost immediately destroyed, and the third, having passed the railway, advanced further than all other tanks on that day. But on the way back, he was also hit by a German shell.

In 16 hours 30 minutes, Captain Dubois received a message that, due to the losses incurred, the infantry could not move on. The division was preparing to withdraw when a counter-attacking enemy appeared at the railway - but the tanks scattered it with fire.

The actions of the tanks in this battle seemed so successful to the French infantry that it was even asked to leave them all night (as sentries) ahead of the captured enemy trench - to cover (!) The infantry. Fortunately, the tanks were ordered to retreat to their “waiting” position in the Bomara grove.