October 13 2017
49
The cold war continues. The diplomatic exchange of "courtesies" is entering a new stage. In Moscow, they can answer the White House: a new expulsion of diplomats from Russia is not excluded. However, some experts believe that the Russian Foreign Ministry is characterized by the line "all the time to evade, retreat, maneuver." 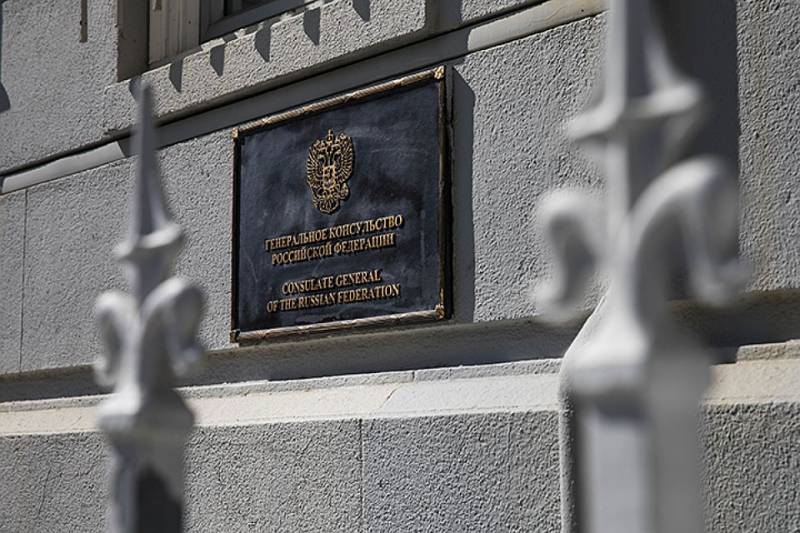 In early September, 2017, the US authorities closed the Russian Consulate General in San Francisco and the trade mission in Washington and New York. The buildings were searched. Moscow considered such actions unfriendly step.

As a possible response to the closure of Russian diplomatic property in the US, Moscow may consider response options. It is possible, for example, that the Kremlin will demand that the White House establish “parity” in the number of diplomatic staff. Translated into Russian, this means an additional expulsion from the Russian Federation of a large number of American diplomats.

Georgy Borisenko, Director of the North American Department of the Ministry of Foreign Affairs of Russia, spoke on the topic of establishing parity in the number of diplomatic representatives. The diplomat said that Moscow is already considering the possibility of reducing the number of employees of the US diplomatic mission in Russia to three hundred.

According to him, the number of people in 455, to whom Russia offered Washington to bring American staff to equalize it with the Russian, also included the staff of the Russian Permanent Mission to the United Nations in New York. However, these people are not engaged in bilateral Russian-American relations. “It was purely our goodwill. We actually gave the Americans a head start, went to meet them, ”the diplomat said.

Recall that in July 2017 Moscow ordered the reduction of the US diplomatic mission in the Russian Federation by 755 people, i.e. leaving only 455 employees.

“As for the answer, we said, including publicly, that in diplomacy there is an inviolable principle of reciprocity, and the Americans are well aware of this. If they behaved in this way, it means that they agree that we can act mirror with their overseas agencies in Russia, ”G. Borisenko quotes. RIA News".

Answering the agency's question about whether the possibility of closing one of the American consulates is being considered, Borisenko assured that Moscow “does not exclude any options, including the establishment of real parity in the number of diplomatic missions”.

The likely new turn of the conflict in the framework of the Cold War would be, we note, a continuation of the political series directed by the previous US President Barack Obama.

The cold war relay, from which Obama himself publicly baptized, was gladly picked up by President Trump, a big supporter of the arms race and a man who bows to R. Reagan. As it is known, it is Reagan who owns the expression about the “evil empire” - as he called the Soviet Union in 1983 year. In the same year, he predicted the fall of "communism." In Moscow at that time, Ronald Reagan was considered the embodiment of the most negative traditions of imperialism and called the reactionary. After all, it was Reagan who unleashed in 1980's. monstrous arms race.

Donald Trump, with his idea of ​​arming America and her allies in Europe, equals Reagan. From this it is clear that strained relations with Russia are beneficial to him, whatever he may say about this. For large-scale production weapons and for the costly modernization of nuclear arsenals, the state needs a reason. “Aggressive” Russia, as it is propagated by American propaganda, is such an occasion. In foreign policy in this respect, Republican Trump differs from Democrat Obama only in that the latter strove to cut military spending, while Trump will increase spending (including at the expense of European NATO partners, who will partially pay for Russia's "containment policy").

Diplomatic scandals are part of the Cold War and will, no doubt, continue. The aforementioned Mr. Obama laid the foundation for them almost a year ago, thus creating a groundwork for the successor. In December of last year, thirty-five Russian diplomats were expelled from the United States under the noisy accusations of "espionage." Russian diplomatic property in the United States was arrested, also under the pretext of "espionage."

Moscow on New Year's Eve behaved peacefully and did not give an answer immediately. Obama was outgoing president: in less than a month Trump was inaugurated. In the Kremlin, apparently, they expected that Trump will conduct a different policy in relation to Moscow. However, such a calculation, if it was, turned out to be erroneous: Trump not only took into account the democrat’s legacy, but went further, in effect unleashing a new arms race.

Time went by. In the summer of next year, the Russian Foreign Ministry was forced to note that the American President was not inclined to resolve a diplomatic conflict.

In addition, pressure on Russia in the form of new sanctions has increased.

The reduction in the staff of the US diplomatic mission in Russia can be considered a response to the actions of US senators who almost unanimously supported the bill on additional sanctions against Russia related to the “interference with the election” 2016 of the year and to the decision of US President D. Trump’s bill turned into law.

Further, Washington closed the Russian consulate in San Francisco and the Russian trade mission in Washington and New York. The US security services searched the buildings, which greatly outraged Russia: Moscow called such searches a violation of the Vienna Convention.

And now it comes to the next response from the Kremlin. Apparently, there is the next stage of diplomatic confrontation. What will it lead to?

“The unresolved issue with our property in San Francisco, which since the closure of the consulate general has ceased to be diplomatic, but remains the state property of the Russian Federation, remains the formal catalyst for the confrontation,” said in an interview "Free Press" Doctor of Political Sciences Mikhail Alexandrov, leading expert of the Center for Military-Political Studies MGIMO. - Americans actually occupy it, do not allow us to dispose of it freely. In my opinion, the measure voiced by Georgy Borisenko is a way to exert diplomatic pressure on the United States so that they do not take new unfriendly steps. ”

According to the expert, the Kremlin should have responded harshly to Washington back in the beginning of 2017. Already then it became clear: Trump, who came to power, is not going to return thirty-five deported Russian diplomats. If at that time Russia really could play a combination with equalizing the number of diplomats - both in the UN and in the embassies, then today it is inappropriate. “The Americans have already hit the wind,” the political scientist recalled. “Therefore, if we go to expel more 155 diplomats, the United States, in response, may cut staff at the Russian Permanent Mission to the UN in New York.” And this is not to our advantage. ”

Yet events can go exactly in this scenario. How will Moscow respond to Washington?

“If the Americans cut our staff at the UN, it will give us an argument to demand that the UN headquarters be moved from the US to another country.” In principle, such a combination can be imagined, but nevertheless it is better to use, I think, other elements of pressure. ”

And the expert gave a specific answer.

It would be possible to “take away the Spaso House mansion on Staropeskovskaya Square” (the residence of the American ambassadors) from the USA. It "historical a building built in the 1910s for the multimillionaire, the “Russian Morgan” Nikolai Vtorov. ” Until 1933, G. Chicherin lived in a nationalized mansion, and then, by order of Stalin, the building was presented to the US ambassador as a residence, and a reception hall was built. “If the United States behaves so ugly, let them build themselves an embassy residence in Moscow, in a simpler place,” the expert concluded.

Mikhail Alexandrov insists that the brazen actions of the Americans became possible because of the specific line of the Russian Foreign Ministry:

“But, I repeat, if we answered mirror-wise from the very beginning, and even with pre-emption, the Americans would not behave arrogantly. It is the current line of the Foreign Ministry - all the time to dodge, retreat, tack, - led to the fact that the enemy bit the bit. ”

As a result, we note, “uklonistskoy” Moscow left two ways out of the protracted diplomatic conflict in which the Kremlin only reacts, and the White House is actively advancing and has already entered into a rage.

One option depends entirely on the manifestation of the goodwill of the two states: the initiator of rapprochement is a meeting at which the parties officially move from the Cold War to the friendship of peoples. About such a policy led by Comrade Gorbachev. Gorbachev's similar policy came as a complete surprise to the United States: at first, the general secretary abroad was not believed, they were looking for a catch. Today, friendship proposals should not be expected either from the Russian side or the American one: Putin is not at all Gorbachev, and Trump is not a supporter of the so-called de-escalation, but an arms race and an offensive on all fronts.

The second option: the resolution of the conflict. Mr. Trump does not always occupy the Oval Office, and the hawk congressmen who occupied Capitol Hill and living in 1970-1980-s patterns, almost all are deeply old (remember McCain). Politics change over the years. It is hard to imagine that Washington is heading towards the friendship of nations, and yet you can: there is no “communism” on the planet (if not counting the country of Kim Jong-un), the USSR is not there either, there is nothing ideologically to divide the USA and Russia, and the world is becoming multi-polar.

Probably, in striving for an independent “resorption” of the conflict, the Ministry of Foreign Affairs of the Russian Federation conducts a policy that the expert very accurately characterized with the verbs “to evade, retreat, maneuver.”

Observed and commented on Oleg Chuvakin
- especially for topwar.ru
Ctrl Enter
Noticed a mistake Highlight text and press. Ctrl + Enter
We are
Live broadcast capture our trade mission in the USPansies, or Death on schedule
49 comments
Information
Dear reader, to leave comments on the publication, you must to register.