October 12 2017
36
Specialists of the manufacturer began the final stage of the factory running tests of a large landing ship (BDK) "Ivan Gren." BDK made the transition to the transfer base in Baltiysk and is preparing to sail. The remaining factory trials will include work with weapons, a communications complex, as well as solving a number of issues on the bow and stern landing devices. сообщает Department of Information and Mass Communications of the Ministry of Defense of the Russian Federation. 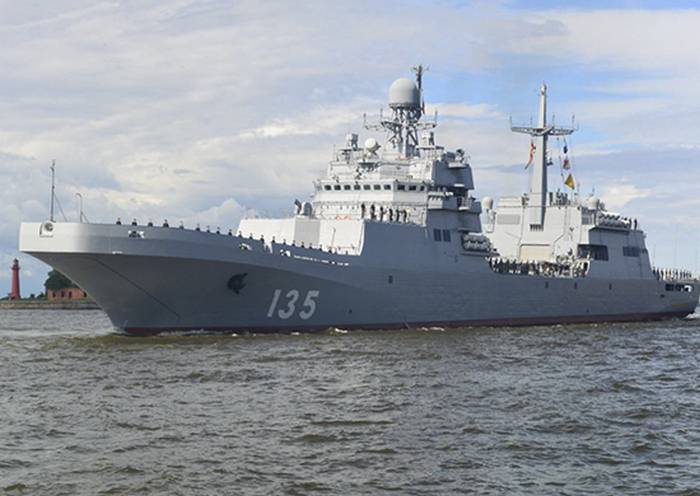 The armament of the 11711 BDK will be the AK-176М and AK-630М universal naval artillery mounts. Also, to hit coastal targets and support the landing force, the ship is equipped with two shipboard installations of the A-215 Grad-M multiple launch rocket system with a range of about 20 km On the deck of the BDK, a single Ka-27 search and rescue helicopter or a Ka-29 transport and combat helicopter is based.

Project 11711 ships will be able to take on board up to 13 units of heavy equipment (tanks) or up to 36 infantry fighting vehicles or armored personnel carriers, as well as the personnel of the air assault units.
- said in a statement

Ctrl Enter
Noticed a mistake Highlight text and press. Ctrl + Enter
We are
BDK "Ivan Gren" continued running trialsThe future of the 11711 BDK is defined.
36 comments
Information
Dear reader, to leave comments on the publication, you must to register.