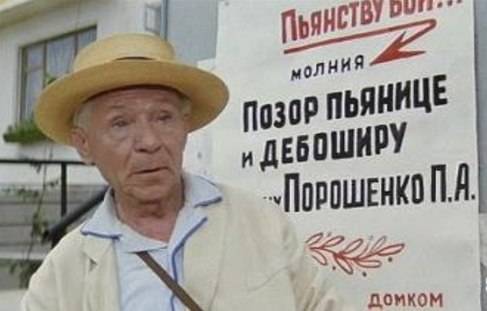 Although the beginning for Kiev looked completely cloudless. Well, as "cloudless"? Kiev has consistently “freaked out” at the PACE in full confidence that “Euroopeitsi” will always be defended by any Kiev “Wishlist” simply because “new Vlada” with its frail breast that year protects poor but rich Europe “from Asian barbarism.”


Europe tolerantly made toasts and regularly delivered to the court "guarantor" a shtof of French brandy, velmie beneficial in chronic alcohol ... diabetes. Everyone was satisfied.

Russia, deprived of the right to vote, proved something there, but who cares about that?

There was, however, an unpleasant incident. President Pedro Agramunt visited Syria. Many did not like it. And since Mr. Agramunt also visited the Crimea, the Kiev delegation became the loudest. Having gathered around themselves the Baltic border guards and the Georgian "children of the mountains," the fraternity brethren began the persecution of the head of the PACE, demanding his resignation.

It went very well. True, Pedro Agramunt was removed because of Syria and the desire of the Europeans themselves to see another person in this post. But since Kiev's co-mates shouted the loudest, it was decided (by someone) that the main people here are the screamers. Moreover, the cunning Lithuanians bargained in exchange for their support of Kiev for their support in voting for the post of PACE President of their candidate - Zingeris Emanoulis.

Here on this potrilegolovye and pierced. With frenzy, they began to push the Lithuanians into the presidency. Despite the obvious reluctance of the majority to see the head of the Council of Europe. And while the team of limitrofs screamed and stamped their feet, the other big “boys and girls” were looking for a compromise that would suit everyone.

He became a Cypriot Stella Kyriakides. And since they voted for her three times, it was impossible not to hear the team from the Kiev team watered the lady. All heard. And they made conclusions. Their.

And then just Russia, two years silently demolishing sanctions, just silently stopped paying money to the budget of the Council, from which it did not see. The deprivation of the first tranche in PACE was stoically postponed, after the second they were alarmed, and finding out that this was not blackmail and there would be no money next year, they thought. Ten percent - big money - a lot of programs will have to be closed, many deputies simply will not give money. And all because of whom?

From the thoughts of all, the person who arrived at the PACE meeting was taken personally by Mr. Pan Pedro (as his name is translated in Europe by Petro). Accustomed to measuring the level of European sympathies with glasses, he immediately spoke of the ongoing Russian aggression and the debt of all of Europe to him personally and almost all of Ukraine headed by him. Debt that has not been paid.

A few surprised Europeans tried to ask questions on the merits of his invitation to talk about corruption and the law on education, which he insulted European neighbors. But Don Pedro did not allow himself to be led away and continued to measure the level of corruption and linguistics with glasses. He even tried to set himself up as an example, getting lost in conversation in the language of the invaders, Polish and Hebrew (or something similar to German). Slightly stupefied deputies from among strangers to the Kiev showman's passions (and those who remained in the hall) tried to find out from each other what kind of hangover they should lose their money for this clown, refusing Russian millions.

And they did not find the answer.

On the contrary, they were increasingly seized by the awareness of the ancient maxim that money does not smell. And Russia just was absolutely right, taking away from this frightened at least the Crimea. Having accomplished a godly deed and having saved more than two million people from this rampage. Yes, and the residents of Donbass after the show started to understand better.

The result was expected. The camarilla from Kiev (although it’s not completely complete) and the Balts and Georgians voted against the resolution. And all the old and wise Europe, with twice the large number of votes, voted for the sanctions against Russia ending at the end of the year not to be extended anymore.

Relevant documents before the end of the year will be prepared by the PACE Cabinet Committee. However, this is purely technical details. Those who decided the main - financial - question, the deputies dispersed, quite satisfied with each other.

Not received a storm of applause and familiar brandy, departed into the unknown Kiev lover of glasses.

And only I had a question: “What else in the vapors of alcohol will the head of the saucepan leader come to mind? More than three years ago, for the very ban in PACE and sanctions on Russia, the Malaysian Boeing’s route was changed over Ukraine, summing it up exactly under the missile called Russian.

What will happen this time? "

PS However, cautious Europeans close the sky for their flights to the Left Bank. Guess?

Ctrl Enter
Noticed oshЫbku Highlight text and press. Ctrl + Enter
We are
Situational analysis of the death of the MH17 flight (Malaysian Boeing 777), made on the basis of engineering analysis from 15.08.2014Results of the week. "God forbid to see Russian revolt, senseless and merciless!"
Military Reviewin Yandex News
Military Reviewin Google News
80 comments
Information
Dear reader, to leave comments on the publication, you must to register.