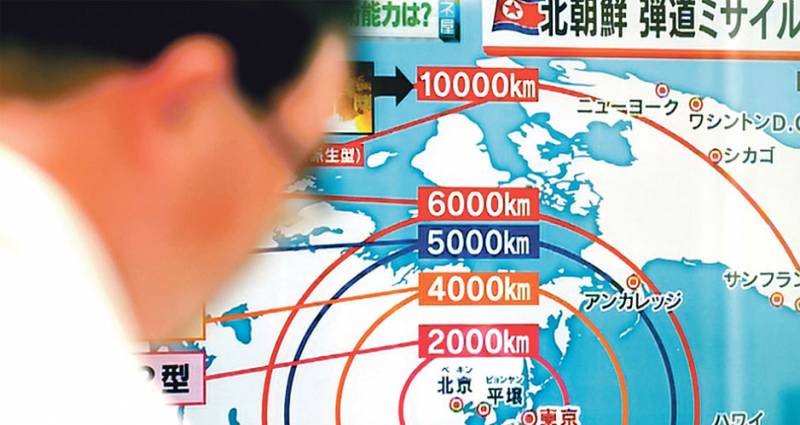 Being in the White House, surrounded by senior military leaders, in the evening of October 5, US President Donald Trump ominously described the current situation in the world as "the calm before the storm." And although he refused to speak more specifically, he sent his comments to North Korea for sure. This is another warning that the United States is on the verge of unleashing a disastrous war.

All this did not look like an improvisation. So that Trump could speak with his statements, a photo session was hastily organized before a dinner party with "the greatest military men of the world" and their wives. Present were Secretary of Defense James Mattis, National Security Advisor Herbert McMaster, Chairman of the Joint Chiefs of Staff Joseph Dunford and Secretary of Homeland Security John Kelly.

The US president, who had just completed a meeting with the generals by that time, brushed aside all the "What a storm?" Questions that immediately followed from the reporters, and finally declared: "You will recognize."

Trump spoke to North Korea in his most threatening manner with his initial phrases at a previous photo session with the military: “We cannot allow this dictatorship to threaten our nation or our allies with an unimaginable number of lives. We will do what we must do to prevent this. ”

Trump emphasized the last point, adding: "And it will be done, if necessary, trust me."

In fact, it is the Trump administration, and not Pyongyang, that bears the main responsibility for making the situation on the Korean Peninsula aggravated to the extreme. This is Trump, the Supreme Commander of the most powerful military machine in the world, has repeatedly threatened to destroy a small, economically backward country. His fascist speech last month at the UN, in which he warned North Korea about “total destruction”, Trump continued by tweeting that North Korean leader Kim Jong-un “would soon be gone.” He dismissed any negotiations with North Korea, publicly reproaching Secretary of State Rex Tillerson that he was “wasting time” in vain, working through the opportunity to negotiate with Pyongyang.

The extreme danger of a war with North Korea deepened contradictions within the Washington ruling circles and in the White House itself. These differences are tactical. Tillerson, Secretary of Defense Mattis and National Security Advisor MacMaster warned North Korea that "the military option is on the table." At the same time, they insisted on the need to find a diplomatic way out of confrontation.

All three of Trump's top advisers also expressed support for the 2015 agreement with Iran to significantly limit the country's nuclear program. Trump, on the other hand, constantly attacked this treaty, calling it one of the “worst and most unilateral deals” ever concluded by the United States. As reported, he plans in the near future "to refuse certification" of this agreement. This step will undoubtedly lead to an escalation of tensions in relations not only with Tehran, but also with the European allies of Washington, which support this deal.

Under these conditions, Trump's meeting with top military leaders was intended to demonstrate full support for his insane and aggressive preparations for a war with North Korea. In his speech before the meeting, Trump stated that he expects from the audience to provide him with “a wide range of military options ... at a much higher pace (than before. - SD).” He made it clear that the priority in making a decision now is for the generals, saying that he relies on them in "overcoming bureaucratic obstacles." 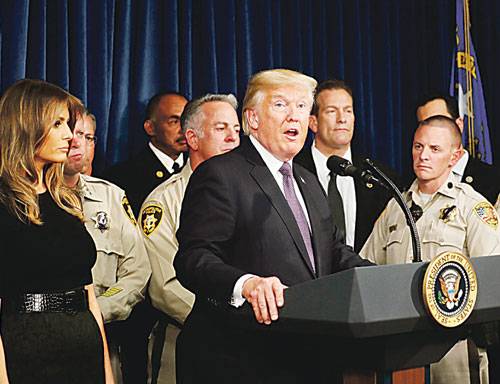 What is at stake in the likely US-North Korean war was explained by Democratic congressman Ted Liu. He warned that the conflict with North Korea could become "incredibly bloody." Condemning the regime in Pyongyang as "an absolute danger and a threat," he said that "there are no good military options." Liu is a former Air Force officer who served on Guam in the 90s and participated in military exercises designed to prepare for a conflict with North Korea.

Liu and Congressman Ruben Gallgo 26 of September sent a letter to Minister of Defense Mattis, stating that "it is wrong to use military force without exhausting all other options, including diplomacy." They demanded to answer a series of questions centered around "the estimates of the largest and smallest casualties (USA, South Korea and Japan) in the case of conventional and nuclear responses to an attack from the US."

The letter ends with these words: “Before this administration leads America along the dark, bloody and unexplored path of the war with North Korea, the American people and its congressional representatives deserve answers to the critical questions listed above.”

After that, Liu tried his best to prove that he was not against the war. Indeed, he supported the McCarthy-style “witch-hunt” against the “Russian influence” on the presidential election in 2016 and the investigation regarding the Trump administration. This faction in the American ruling elite is in favor of confrontation and, if necessary, war, first of all with Russia and the second with North Korea and indirectly with China.

Commenting on the situation for the Los Angeles Times, retired Air Force Brigadier General Rob Givens warned: “Too many Americans believe that a US war with North Korea will be like an invasion of Iraq or Afghanistan or like military operations in Libya and Syria. But in fact, she will not even remotely resemble them. ” Givens bluntly stated: “This war will have only one end - North Korea will be defeated. But at what cost? ”

Givens, who served on the Korean Peninsula, said that, according to Pentagon estimates, 20 thousands of South Koreans will die every day, and that is before nuclear weapon.

There are all signs that the Trump administration, in its striving to preempt retaliatory strikes from North Korea, is preparing a massive attack with conventional or nuclear weapons in order to destroy the North Korean military mechanism, industry and top leadership.

Military analyst Daniel Pinkston told the Los Angeles Times that any attempt to destroy North Korea’s nuclear arsenal "has a high probability that you will unleash just what you are trying to prevent," namely, nuclear war.

In this case, as reported in the report of the 38 North analytical group established at Johns Hopkins University, only in Tokyo and Seoul 3,8 million people will die as a result of a nuclear attack from North Korea. And although this group did not make predictions about other losses, it is clear that as a result of the American nuclear attack, millions of North Koreans will die. And that is if it is possible to prevent a conflict with the nuclear powers, that is, with Russia and China.

Political divisions in Washington and inside the White House make the US attack on North Korea more, and not less likely, because Trump is desperately seeking ways to justify the existence of his administration and transfer acute social tensions within the United States to an external enemy.