Meet the leader of the presidential rating

October 12 2017
316
During the week, the Levada Center, a sociological monitoring service, published the results of a survey conducted in September of this year on future presidential elections in Russia. For obvious reasons, the closer March is, the more similar surveys will be conducted by various research centers, sociological services and other similar organizations.


Why "understandably"? Yes, if only because the situation with the coverage of the 2016 election in the United States and the post-election situation there, as well as an informational squall about the Catalan referendum and its results, somewhat shaded the significance of the events inside Russia for citizens. What is called, the media overdone ...

Firstly, the voter needs to be reminded of the upcoming elections in the Russian Federation. Secondly, whenever possible, to attract people to polling stations. But then, the presidential cycle, as is known, is six years old, and many are already “lost” with the answer to the question whether this cycle ends at all, or it can be extended somehow automatically without visiting polling stations ...

In the “Levada Center” survey, 1,6 thousand respondents aged from 18 years — that is, those with voting rights — took part. To the first question, and he was about whether the respondents knew the time of the upcoming elections, 44% of respondents correctly answered - they named the month and the year exactly. It is noteworthy that 21% of respondents were not able to answer this question at all, “without risking” to even name the approximate year of voting for the presidential candidate.

Further, survey participants were asked about who they would vote for, if the elections were held next Sunday, and if you keep in mind the choice of whether to go or not to go to polling stations. In the top five (bottom-up): Dmitry Medvedev (less than 1%), Alexey Navalny (about 1%), Gennady Zyuganov 2%, Vladimir Zhirinovsky - 2%, Vladimir Putin - 52%. The following fact is noteworthy: 23% of respondents said they did not know who to vote for in the elections. About 9% responded that they would not vote. That is, the real triple (based on the results of the survey looks like this: 1 - Putin, 2 - I don’t know. 3 - I won’t go to elections.

The results of the following question looked a bit strange, a priori implying that each of the respondents would certainly go to the polls. Vladimir Putin already has 64% in it. And the number of those who do not know who to vote for has also grown - up to 28%. That is, many of those who are not going to go to the polls, if they still came to the polling stations / crawled / docked, would vote for the current president. The headquarters took it into service? ..

But this is oddity (or, like in that cartoon, to paraphrase: “maybe not oddity ...”) in the survey results is not the only one. Further employees Levada Center they offered respondents to give the name of the politician for whom they would give their votes if Vladimir Putin does not put forward his candidacy for the March elections. This is taking into account the fact that "all the others" will nominate their candidates.

The result is as follows: in the first place, literally the final spurt comes out (attention!) Dmitry Medvedev. And for him are already going to cast their votes 8% of voters. Yes, it’s about 1,5 times lower than Poroshenko’s Ukrainian electoral rating, on which (over Poroshenko and his rating) we’ve made it, sorry, laugh, not covering the mouth, but this is ... the leader of the poll. Yes, yes ... 8% for leadership, as it turned out, is enough. And this is taking into account the fact that in answering the question that was asked a couple of minutes before that, Dmitry Anatolyevich had a “okolonol”. 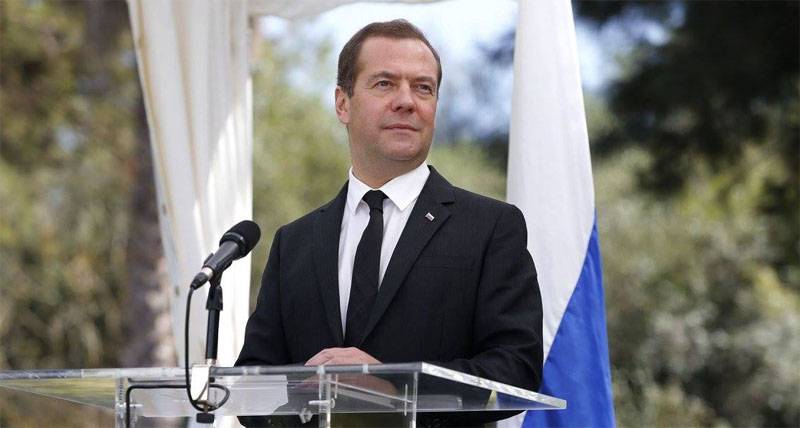 If the sociology were awarded the Alfred Nobel Prize, then its owner in 2017 would definitely be the Levada Center. After all, the experts of this particular organization have revealed a truly fantastic pattern: if Vladimir Putin does not go to the polls, then Dmitry Medvedev’s rating grows many times ... And at the same time “repeatedly”, and no higher than the seventh or eighth part of the current president’s rating.

In fact, there is nothing particularly strange about this result. After all, the survey was among ordinary citizens "on the street", and a certain percentage of ordinary citizens already at a subconscious level "absorbed" the paradigm that "if not Putin, then Medvedev."

The most remarkable thing is that 3% of respondents were reinforced concretely motivated and to the question for whom you vote if Vladimir Putin does not take part in the elections, they clearly answered: “Putin”.

By the way, here in the Western media it was recently said that the current president would, so to speak, appoint the current head of the Tula region as a possible successor. Similar information about the “high chances” of Alexey Dyumin was previously published by the Petersburg Politics Foundation. So Alexey Dyumin in this survey is less than 1%.

What conclusion can be drawn from this survey? Counting on “I'm tired. I am leaving ”may finally guess at who Vladimir Putin will“ choose ”on 2017-2018 on New Year's Eve with those ratings published by Levada ... More realistic people, the“ successor ”operations cannot see in the near future same percentage data.

Although, as you know, statistics is a thing: take, publish some large social monitoring agency from the same Dmitry Medvedev (or hypothetical candidate N) percent not 8, but 48, and the feeling “everyone ran and I ran” completely able to work with any assessment of the work of the government and a particular candidate. Figures are a stubborn thing, and psychology is flexible ... But such scenarios, as can be seen, have not yet been proposed. And Dmitry Medvedev's eight-percent electoral leadership is, well, except, in that sense, to surprise Western “partners” and sow seeds of hope in their hearts and souls ...

Ctrl Enter
Noticed a mistake Highlight text and press. Ctrl + Enter
We are
Situational analysis of the death of the MH17 flight (Malaysian Boeing 777), made on the basis of engineering analysis from 15.08.2014Syria: Americans scare themselves, and Asma Asad buys chairs
316 comments
Information
Dear reader, to leave comments on the publication, you must to register.