October 12 2017
52
Poland challenged fraternal Ukraine! Ukrainian experts are perplexed: since the time of the Smolensk catastrophe, Russia is leading a “hybrid war” with Poland, and does Poland defy Ukrainian national security? 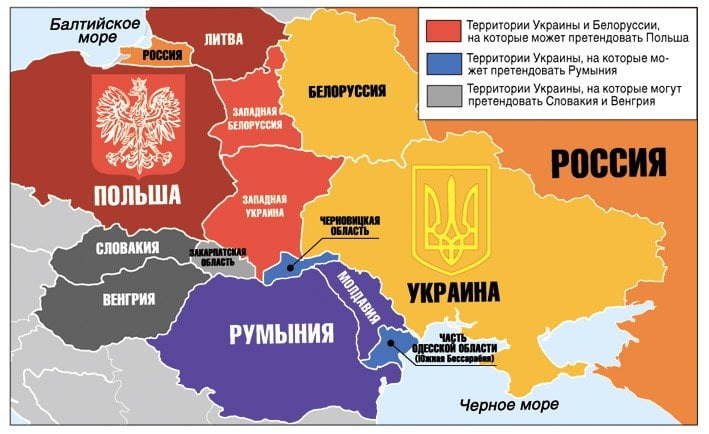 The hybrid “semi-war” (aka “half-world”) in Europe, created through the “aggressive policy of the Russian Federation”, influenced the policies of individual states. Among the latter is noticeable Poland. She herself became the “object of the Kremlin’s hybrid attacks,” but she is trying to demonstrate policies that often do not fit into EU standards. For example, Warsaw pursues a policy that creates "challenges to the national security of Ukraine."

A long article was written by V. Lozovy and V. Yablonsky on the topic of Polish “challenges”. Publication appeared on the site "Mirror of the week". It is boring to read it in the original, and not every reader will understand the concepts of “glorification”, “securitization of the past” or “commemorative practices”. Therefore, we allow ourselves to make an ironic retelling.

Initially launched theses: 1) “hybrid half-world-semi-war” in Europe - the result of Russia's aggressive policy; 2) this policy has influenced the policies of some countries, mainly the states of the former communist camp; 3) Poland, the target of the Kremlin’s hybrid attacks (“Smolensk catastrophe, promoting the activation of ultra-right radicals, etc.”), is trying to demonstrate a policy that sometimes goes beyond EU standards: Polish authorities focus on tragic pages stories and conducts a "historical policy" that creates the challenges of national security of Ukraine.

How did Poland come to this?

It turns out to blame the "right" in power. They are waging an irreconcilable struggle against the “identification crisis” that has arisen in Poland because of joining the EU and spreading the liberal economy, because of consumerism, tolerance, cosmopolitanism, and even because of the “significant migration of Poles to the rich countries of Europe” (similar migrants counted as much as five percent).

As it turned out, patriotism in Poland was "actualized" by an unexpected catalyst - NATO. Poland entered there - and the topic of patriotism again became topical. How does this thesis argue the co-authors? It is very simple: according to Polish conservatives, the Polish national idea should be the incentive to risk life, not European liberal mercantile values! It turns out that joining NATO had a special local effect, which aroused Polish patriotism.

The patriotic interests of Poland shy away. “The influx of Ukrainians into the country (up to 1,3 million of our compatriots are working in Poland),” the co-authors write, “led to an increase in anti-Ukrainian sentiment. More than a third of the polled Poles believe that Ukrainians may pose a threat to the security of Poland. ”

V. Lozovy and V. Yablonsky got right up to the very Pan Duda.

President Andrzej Duda said that the Poles are a nation for which the historical dimension is very important in assessing modern politics. What is important here is the defense of the good name of Poland and the cultivation of patriotism in the representatives of subsequent generations. The Polish authorities have planned something called an “offensive historical policy”. This thing will be the "basis for reformatting Polish identity." Warsaw looked far and deep: plans to revive nineteenth-century ethnic patriotism!

Tasks performed in the course of achieving the goal set by the Poles: one should not focus on the murder of Jews or military collaborationism, but one should show the heroic past, comment on the actions of Warsaw, the authors of the article. The Polish right-wing even “assert that the new historical policy should be based on the Polish interpretation of history, be offensive and make (!) The world respect the Poles”.

Then V. Lozovy and V. Yablonsky are moving on to the “aggregate of political-informational and mental contexts”.

The Polish mentality grew up on the conviction that the sufferings of Poland are connected with the special historical vocation of the martyred people, the “Christ of the Nations.” V. Lozovy and V. Yablonsky are convinced that the Poles are sure of the following: historical sufferings give them a sense of moral superiority and even nobility. The right-wing leaders of Poland send a message to society: the Polish sacrificial nation "is positioned by its enemies as a nation of criminals, and we need an offensive historical policy, some Polish" ties "to repel these evil attacks."

A special point of the conservative policy model is confidence: Poland is a border area, a stronghold of Europe and the leader of a group of local states.

It is here that Ukraine emerges - as an integral part of the region of the “eastern cresses”. In Poland, there is an idea of ​​a “civilizing” mission that the Poles carry to the Ukrainians (the population of the “Polish regions”). Western Ukrainian lands in general are often referred to as the "eastern provinces of Poland." “And the facts of the cruel attitude of the Poles to the Ukrainians, which caused considerable ethnic tension, are practically not mentioned,” the co-authors develop the topic.

Ukraine seems easy prey to some in Poland, the authors continue, because Kiev is “in a state of hybrid war” with Moscow. In order to achieve their goals in Poland, "it was decided to use the Volyn tragedy of the Second World War," the article states. In July, the 2016 Sejm recognized the Volyn tragedy as genocide. But at the beginning of 2000's, the authors remind, the conflict around this tragedy "was practically resolved." The presidents of the two countries honored the memory of the victims of the tragic events and called on the peoples to "forgive and ask for forgiveness." But "it seems to the Polish side that the Ukrainians did not repent much." Poland is now making efforts to achieve international recognition of this tragedy. Polish Foreign Minister V. Vashchikovsky stressed that the state should take the model of Israel as a model of historical policy: he introduced the concept of the Holocaust. But Poland has no corresponding success. “The involvement of a part of the population in the genocide of Jews, recognized as the greatest crime in the history of mankind, encourages Poles to“ create their own genocide, ”the authors point out. “In a certain sense, the spread of the Volyn tragedy theme should act as a kind of psychological antidote to the painful memory of the murder of Jews by the Poles and other criminal acts during the Second World War,” they write. “This gives grounds to assert that the Poles, like the Jews, have suffered significant sacrifices and relativize responsibility for participating in anti-Jewish actions.”

The Volyn resolution of the Polish Sejm "was the result of a long anti-Ukrainian campaign in Poland," the article concludes.

Further, the text contains the theme of “denigrating the Ukrainian national liberation movement” and the theme of the Russian trace.

“Russia and pro-Russian forces in Ukraine took an active part in this campaign and used it to their advantage. In order to slander the Ukrainian national liberation movement, as early as April 2010, the Party of Regions deputy V. Kolesnichenko organized an exhibition dedicated to the OUN-UPA atrocities, which, in addition to Ukraine, was exhibited in Poland, Greece, Russia and Cyprus. A book was also published on the "crimes of the OUN — UPA" and the tragic events in Volyn. In July, 2013, on the eve of the signing of the Association Agreement between Ukraine and the EU, Kolesnichenko submitted an anti-Ukrainian proposal to the Polish Parliament to recognize the events in Volyn as genocide, which was supported by the Party of Regions and Communists deputies of the Verkhovna Rada of Ukraine. Now, when such a decision is made by the Sejm, it gives rise to the Russian Federation and anti-Ukrainian forces, referring to the authority of the parliament of the Republic of Poland, to discredit the struggle of Ukrainians for independence and further distribute the Soviet (now - Russian) interpretation of history. ”

Then the authors return to Poland and write that, according to the Polish version, Ukrainian nationalists staged a “ruthless genocide” in the territories of the Polish-Lithuanian Commonwealth. “The Ukrainian national liberation movement,” the co-authors resent, “seems to be Polish right-wing politicians and the media only as collaborationism with Nazi Germany and a criminal [act] against the civilian population.” Then the image "is projected onto modern Ukraine, which honors the UPA struggle for independence."

In conclusion, gentlemen V. Lozovy and V. Yablonsky give advice to Kiev.

The dialogue between Ukraine and Poland "should be built on knowledge and readiness for mutual agreement." A number of factors should be considered:

- “anti-polonism” did not become widespread in Ukraine, and in Poland “anti-Ukrainian sentiments are cultivated and dominate”;

- a request for clarification of historical subjects (the same Volyn tragedy) should not be realized in a form that creates an image of the enemy;

- Polish media discourse “often replicates ideas based on distorted historical memory” (for example, according to opinion polls, the biggest enemies in World War II for the Poles are Ukrainians, not Germans or Russians).

Poland is recommended to take the Polish-Ukrainian relations “in a wider context”: “In our common history there was also the tough anti-Ukrainian policy of the Second Polish-Lithuanian Commonwealth, the policy of“ pacification ”, the crime of the Home Army units, which at various times provoked the Ukrainian-Polish confrontation”. In short, the achievement of a “compromise historical narrative” is needed, followed by reconciliation.

“A European democratic state cannot build a policy of reconciliation with Ukraine and Germany on different principles and approaches only because one of the countries is in a state of actual war with the Russian Federation, and the other is a pillar of the European Union. Although lately Warsaw is already launching an offensive in the western direction ... ”- the co-authors complain, obviously hinting at the fact that Poland has friction with Germany.

The cult of the OUN — UPA, we note, the authors shamefully quote the crimes of the authors — that is the real root cause of the current political troubles and troubles with Poland, which are narrated by foreign policy experts V. Lozovy and V. Yablonsky.

If there were no known “patriotic” sentiments in a certain part of Ukrainian society, there would not be that political conflict between Kiev and Warsaw, which pushes those who whitewash the UPA, who fought for “independence,” to search for “compromises”, but at the same time it tells about “hybrid” »The war that the“ aggressive ”Russians since the Smolensk catastrophe allegedly wage against Poland and against Ukraine.

Oh, to unite the Poles and Ukrainians in the confrontation of Moscow! This is the thought that reads behind all this long and boring opus. However, before the unification far. Far even to compromise. And who will look for him? Poles? They have no time. Having dealt with Ukraine, they took up Germany.

Observed and commented on Oleg Chuvakin
- especially for topwar.ru
Ctrl Enter
Noticed a mistake Highlight text and press. Ctrl + Enter
We are
Hybrid war in the economic sphereSituational analysis of the death of the MH17 flight (Malaysian Boeing 777), made on the basis of engineering analysis from 15.08.2014
52 comments
Information
Dear reader, to leave comments on the publication, you must to register.