October 12 2017
19
Despite the hurray of patriotic rhetoric, the population of Poland is steadily declining, and millions of descendants of proud gentlemen are ready to wash the bathrooms, just to quickly leave their "beloved" homeland ... 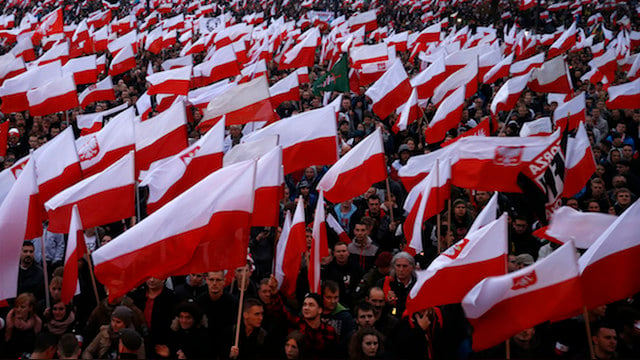 The Warsaw uprising, the former, may the Poles forgive me, just a small episode of the Second World War, in the speeches of the Polish ministers turned into the largest battle of the century that decided the outcome of the struggle against Hitler.

The Soviet Union, in the opinion of the Polish authorities, is an aggressor and invader who has unleashed a war, therefore all Soviet monuments must be demolished. On the attack on Soviet Russia in 1919, accompanied by the annexation of vast territories, and allied relations with Hitler (in particular, when dividing Czechoslovakia), these people prefer not to recall.

The traditional claims of official Warsaw against Russia have recently been added to the requirement for Germany to pay either compensation, or indemnity for the sufferings of the Polish people during World War II, although the issue has, in fact, been closed for a long time.

In parallel, Warsaw, without any doubt, is actively demanding from the EU (in fact from Germany itself) subsidies to maintain a decent standard of living. The Polish leadership is not in the least embarrassed by the fact that it demands tough money on one occasion, and begs for it on another, from the same country ...

In Warsaw, they often dream aloud about the Fourth Polish-Lithuanian Commonwealth “from mozha to mozha”, talk about “Oriental chairs”, severely criticize the migration policy of the European Union and issue passports with modern Ukraine and Baltic views.

In general, at first glance, right-wing politicians are leading Poland today. But on closer inspection, everything is not so simple.

The “classic” definition from Wikipedia says that “nationalism is an ideology and policy direction, the fundamental principle of which is the thesis about the value of a nation as the highest form of social unity, its primacy in the state-forming process”. Still nationalists stand for the “unification of the national identity for the practical protection of the living conditions of the nation.”

And here on this place a person who understands the modern Polish realities has a feeling of dissonance. Logically, under the rule of the nationalists, the nation itself must grow and develop, and its dignity must be one of the highest values.

What happens to the Poles?

For the fifth year now, the population of Poland has been continuously decreasing in the absence of a sense of people’s perspectives and confidence in the future. The existence of some cities just turned out to be a big question. According to the Warsaw Gosstat, the population of the country decreases by a million or more per year. However, Polish journalists and independent experts call such a “picture” unjustifiably optimistic and accuse Warsaw officials of statistical fraud. Rzeczpospolita, citing data from Eurostat, claims that the actual number of Polish residents is only about 36 million today. The fact is that Warsaw officials from statistics attribute to the population of the country those 2,2 million who left Poland in the 21st century, taking advantage of the country's accession to the European Union, live outside its borders and categorically do not want to come back.

By the way, "ask back" they still can. For example, in the UK, the Poles are the largest ethnic minority. There are over 850 thousands of them in Foggy Albion. In some English cities, the proportion of Polish migrants in the total population structure is almost 10%.

The British believe that the Poles are already too late to visit them. The Guardian recently published British government plans to reduce the number of migrants in the country in connection with Brexit.

Official London in the near future plans to take on its territory a predominantly highly skilled workforce, and to refuse the services of foreign laborers, plumbers and nannies. But the majority of Poles in the UK are (with the exception of perhaps physicians who left the house in an organized manner) to low-skilled workers. The United Kingdom will have to leave the hundreds of thousands of descendants of proud gentlemen who cleaned the pipes there in recent years and looked after the children of the “second generation British”, who saved money on British nannies. At home, these hundreds of thousands of people will have to compete for jobs in picking strawberries and cleaning plumbing with people from post-Maiden Ukraine, who are desperately dumping today on the Polish labor market.

However, if you really look at things, you can conclude that when forcedly returning from the UK, Polish migrants are unlikely to stay in Poland itself for a long time. They will go somewhere else anyway. After all, even those who still remain on the banks of the Vistula, today - "suitcase mood."

According to opinion polls, about 20% of people living in Poland now have plans to leave the country in the next 12 months. It is clear that not everyone will succeed in this, but the trend itself looks eloquent and very depressing ...

The nationalists, under whose authority the nation itself is melting before our eyes, and its representatives with great joy are cleaning the toilet bowls to the representatives of another people, looks tragic and comical at the same time.

When communists muddled with mud today in Warsaw and in alliance with the hated USSR, the population of Poland in the post-war years grew at a rate of 200 - 300 (or even more) thousand people a year. Women gave birth to children, and cleaning someone else's sewers was not considered a particularly honorable occupation. It turns out that the real patriots of their country, in reality, improving the living conditions of the nation of the former Polish-Lithuanian Commonwealth, were exactly the same partners of the CPSU from the Polish United Workers Party, ruling in Poland up to 1989, ...

But who, after all the above, to consider Messrs. Kaczynski and Matzerevich, who are at the helm of the Polish statehood today, is a big question ...

Ctrl Enter
Noticed oshЫbku Highlight text and press. Ctrl + Enter
We are
How Poland is turned into a new ram against RussiaCatholic Brothers. One thousand years of European integration
Military Reviewin Yandex News
Military Reviewin Google News
19 comments
Information
Dear reader, to leave comments on the publication, you must to register.