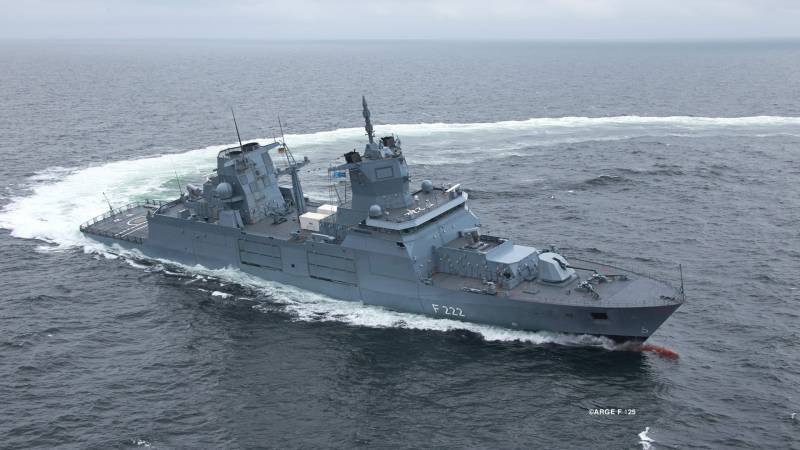 Viscous and stingy emptiness fills the space. An inexplicable substance with a neutron star density, not bound by time or space. Its smallest particles form patterns with such high degrees of symmetry that emptiness seems to be an artificially created, rational organism.

Theory of emptiness. Ether. The great philosophical "nothing."

What the most ingenious astrophysicists could not understand was successfully embodied in metal in 2017, at the German shipyard ThyssenKrupp.

Military super-ship with a displacement of 7200 tons, loaded with ... emptiness.

Now I will try to explain what seven thousand tons mean for a warship.

With the right approach, this would be enough to implement very serious characteristics.

Such a ship can cut a wave on 32 nodes with the aggregate power of 68 thousand hp machines. Combined power plant - two steam turbines, two diesel engines, six steam boilers. To increase survivability, EI mechanisms can be dispersed in nine watertight compartments (and in total such compartments can be 16).

Electric power requirements were provided by three turbogenerators with an aggregate power of 0,5 megawatts.

The ship had three towers of the main caliber (mass 140 tons). And in the cellars of the ammunition, 1080 sharpened pigs (based on 120 per barrel), each weighing half a centner shone dimly. 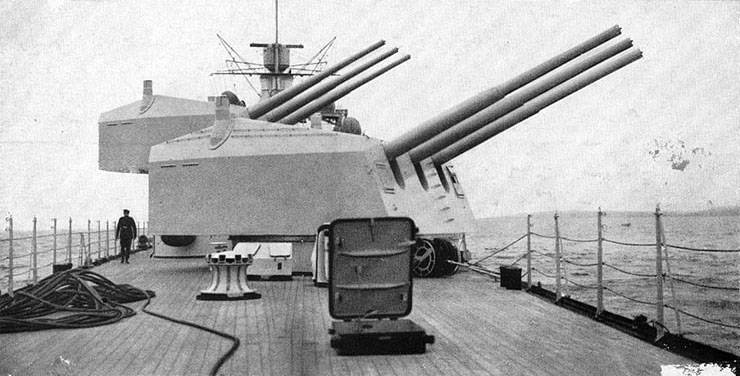 GK supplemented dozens of smaller-caliber artillery systems (including the powerful “Akht-Akht”, anti-aircraft guns of caliber 88 mm). The armament of the torpedoes, the 100 mines of the barrage, the catapult and the 2 seaplane closed up.

Anything that can be used as weaponwill be used as a weapon.
- Stanislav Lem

The crew of the miracle ship consisted, in theory, of 500 sailors. In practice, 820-850 sailors, foremen, and officers were usually on board the cruiser.

After all this, there was a reserve load for the installation of armor. Not the thickest armor plates. But watch out! Steel products are distinguished by their massiveness.

In short: armored belt (50 mm) with two traversing bulkheads (70 mm), bevels (10 mm), passing into the internal bulkhead (15 mm). Horizontal protection - a flat armored deck 20 mm thick, covering 100 meters of the length of the hull of the ship. It is worth noting that the hull lining in the upper part of the board had a thickness of 15 mm, which contributed to the additional security of the ship. And, of course, increased the already considerable mass of the body. 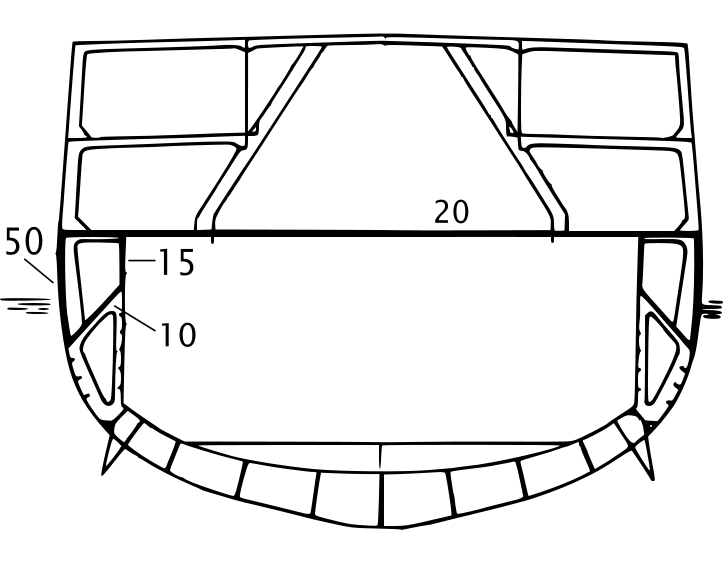 The exact value of the mass of body armor will tell military historians, but even purely offhand it is obvious that we are dealing with hundreds of tons.

This is what a warship with a total displacement of seven thousand tons is. So much weapons, mechanisms and various equipment are placed within the specified displacement. 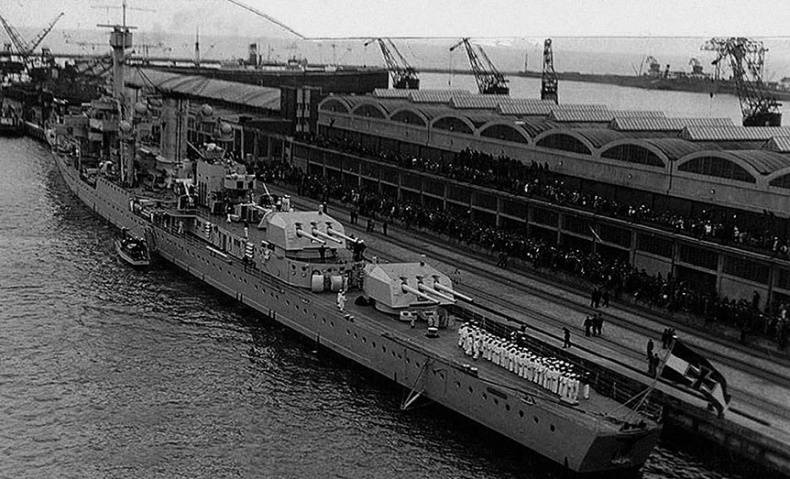 You say - bust. But how else could exist the cruiser “Konigsberg”? This is 1927 year.

Light cruiser type "K" long sunk in history. Now let's see what 7200 tons of modern ship designers spent on. The newest Bundesmarine frigate type F125 “Baden-Württemberg” (2017 year). The Germans themselves are shy of its size - in reality, the frigate is the size of a destroyer.

What the Germans have achieved in 90 years. The results are in the short table. 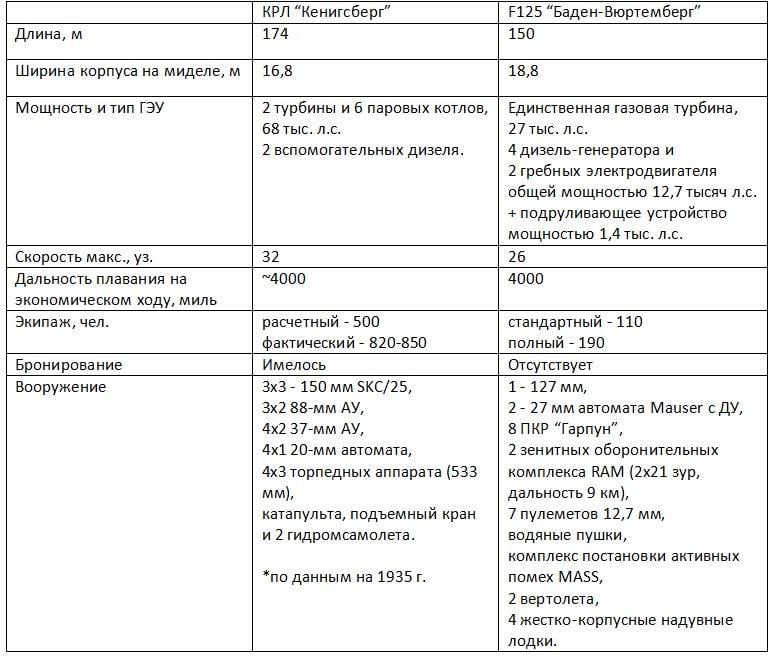 The hull of the frigate has a greater width and lesser elongation (8 vs. 10,4), due to the lack of the need to ensure high speed. “Chunky” hull with more complete contours contributes to better seaworthiness and, with the same displacement, has a larger internal volume.

No one is going to seriously compare the automation and resource mechanisms of ships with 90-year difference in age. I can only note that the modern frigate demonstrates the power of modern technology. According to calculations, Baden-Württemberg will spend up to 5000 hours per year at sea (60% of the time), without the need for lengthy inter-line and scheduled preventive repairs.

Requirements to ensure autonomy and range remained unchanged. Like 90 years ago, modern warships of this class have a range of ~ 4000 miles. What does this mean for their design? Due to the continuous progress and increase in the efficiency of power plants, modern ships, with the same cruising range, require less fuel.

In terms of energy, a modern ship completely “merges” to its ancestor. And the question is not whether an oversized frigate needs the speed of an 30 with more than one knot, but that IT WAS, and now it has NOT BECAME. And the mass remained. 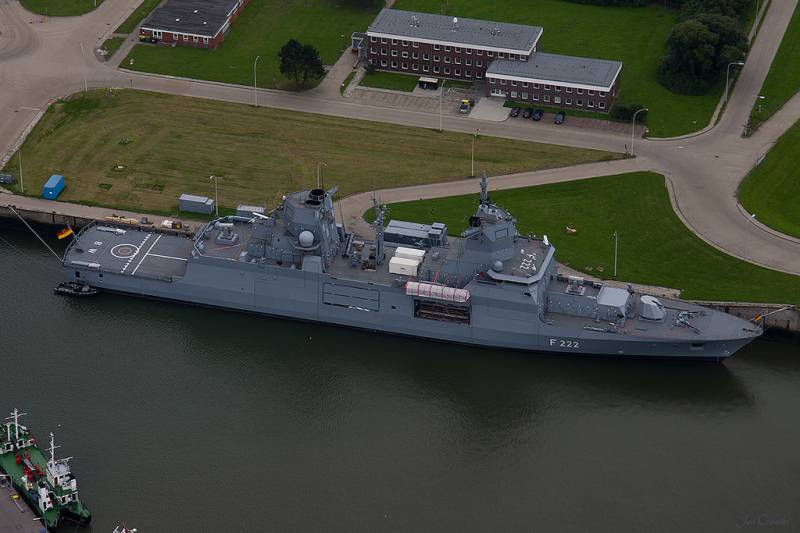 And if this is no longer the weight of the power plant mechanisms, then what was the load reserve spent on?

Again, the Baden power plant has not only less power, but also better specific performance. Lower weight (hp / t), better efficiency and efficiency. And if this is not observed, then this means that the technical progress of 90 has been trampling down the years.

The speed fell, the power decreased, the size of the GEM and the fuel supply decreased - the displacement (VI) remained the same.

Maybe the reserve was formed designers sent for weapons?

The most massive armament of the modern frigate is the nasal 127 mm installation Otobreda eight times lighter than one tower of the Königserg cruiser. Let me remind you that there were three such towers. And in modern frigate, in general, there is nothing more massive. 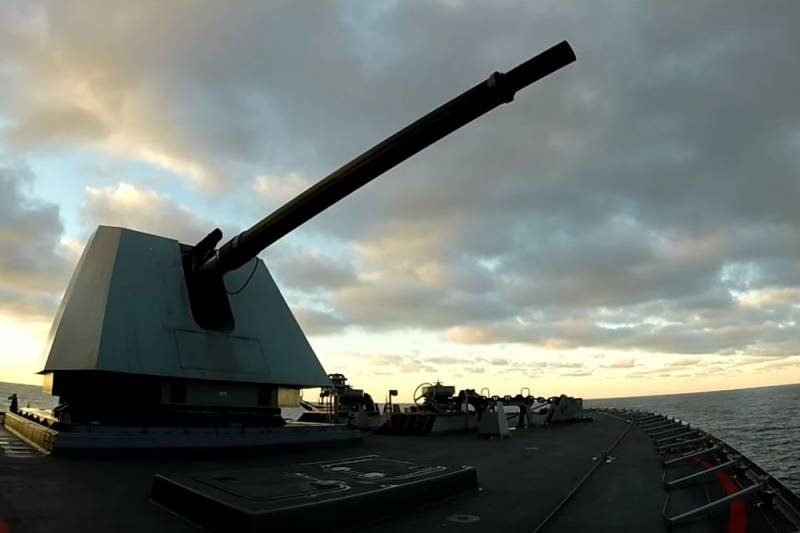 No water cannons, inflatable boats, and plastic harpoon rockets will cover the immense difference in the mass of weapons of ships of different eras.

Modern weapons occupy less space (compare the sweeping radius of the “Konigsberg” barrels - a dead zone where nothing can be installed) and weighs many times less than the 1920's naval guns.

Who does not believe - let him estimate the mass of the mobile launcher RAM (the mass of the air defense missile system together with missiles less than 8 tons) and compare this value with the paired anti-aircraft C / 32 caliber 88 mm (24 tons).

You, probably, think about modern means of detection and control of fire. Sonar radars, which in size and mass can (supposedly) go far beyond the bounds of reasonable. This is the desired “dark matter”, which occupies most of the VIs of a modern ship.

Alas, no “50-kilogram flash drives” (such a bike was encountered) and so forth. The masterpieces of military electronics made by military standards, protected from EMP, with half-kilogram plugs and the need to blow 5 fans, will not be able to compensate for the absence of at least one 140 -tonnaya tower main caliber.

I'm not talking about armor and an incredibly powerful (and long), by modern standards, powerplant - design features that "ate" a significant part of the military aircraft of the Second World War.

Now, instead of everything, the Cassidian TRS-4D radar with an active phased antenna array. (We say that the ships of past epochs did not have bulky rangefinder posts and analog calculating devices, the size of an entire room. Well, let’s skip this question, simplifying the task).

Returning to the multifunctional radar. There are no very heavy 50-kg “flash drives”. According to data provided by the developer of Airbus Defense, the radar is a compact system (these are non-rotating radar blades on 60's ships) consisting of four AFAR modules. All equipment is placed in a tower-like mast installed in front of the superstructure of the frigate. 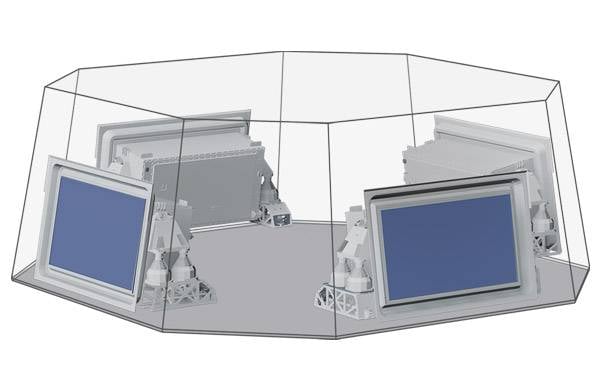 Indirectly, the mass-dimensions of ground-based radar SAM systems, for example, 91Н6Е (С-400), placed on a mobile platform (MZKT-7930 tractor) testify to this. With incomparable radar characteristics, the domestic C-400 has twice (!) A greater detection range for aerodynamic targets.

For those who have not yet understood, the shipborne radar of Baden-Württemberg has a very modest, by modern standards, detection range, yielding in terms of energy capabilities (and therefore mass dimensions) to recognized favorites in the field of air defense.

And if the C-400, PAC-3 “Patriot” or long-range THAAD radar complexes are placed on a mobile chassis - why would a modest Caassidian TRS-4D radar suddenly weigh hundreds of tons?

It's not even Aegis.

Hydroacoustic station? Traditionally a large and heavy element of the modern ship.

Three times “ha.” On the new German frigate it is not.

Sources speak only about the anti-sabotage detection system of combat swimmers.

No, gentlemen. I can state with confidence that these elements do not affect the dimensions in any way. And weigh enough enough to remain imperceptible against the background of the dimensions of the ship. History knows examples when ESD systems and forced air conditioning systems were installed on ships of the late WWII period, without any noticeable influence on their design. An example is the heavy cruiser “Worcester”.

This is more than strange. Constructed at the turn of the millennium, the German frigates of the previous type “Saxony” (F124) had a larger crew, greater speed and carried weapons of a different scale. 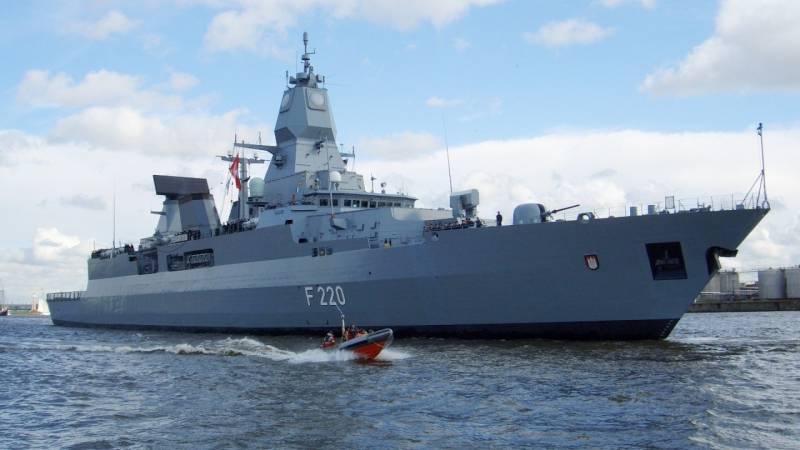 Two radar. The first is APAR, a mass-dimensional analogue of the Cassidian TRS-4D, with four AFAR.
The second is a powerful decimeter S1850M with mechanical scanning (rotating antenna post) with a target detection range of ~ 1000 km.

And, in addition to the two self-defense RAM SAM systems, the 32 launch units for the “Standard-2” anti-aircraft missiles (in the future - the placement of the anti-satellite “Standard-3”) was possible. And this is a completely different opportunity. This is not “Baden-Württemberg”, whose air defense ends 9 km from the ship.

Otherwise, the “Saxony” carries the same “Mauser”, “Harpoons” and helicopters. And, by the way, is equipped with an anti-submarine anti-submarine gas.

What is the joke? Previous generation frigates had a lower displacement than the “Baden-Württemberg”. For a whole thousand tons!

Explanation of the paradoxes

As noted, it has been noted in past articles on the unexplained loss of displacement on modern tin cans warships, the design process can easily “get lost” 7, and 8, and 15 thousand tons, wasted into the void.

And this, in no case, is a rebuke to high-class specialist designers. This is following trends aimed at optimization. fleet under decorative functions and tasks. 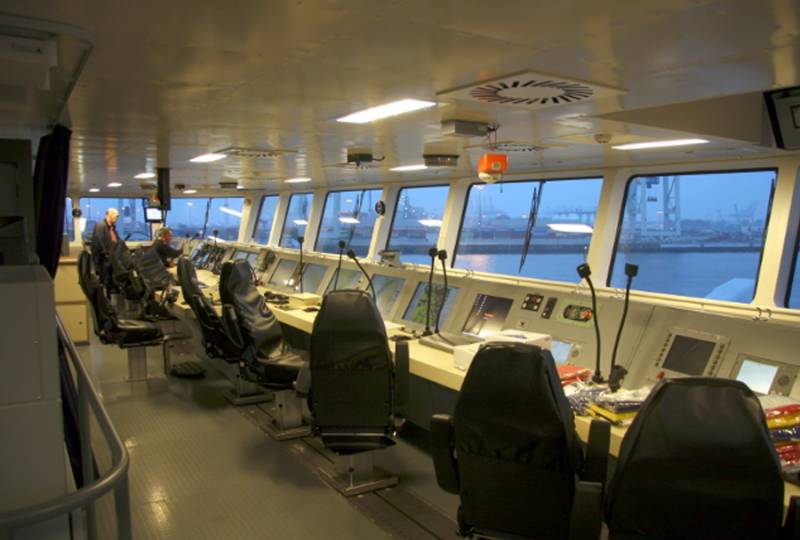 It is possible to place a bridge (observation deck) with all communications and workplaces for dozens of sailors at the height of a nine-story building. This is the era of digital technology, remote monitoring and high-resolution cameras.

You say - risky. The crew will not be able to lead the ship if cameras and sensors are damaged by a powerful electromagnetic pulse (EMP). A counter question - do sailors, during a nuclear explosion, sailors will stand and admire a bright flash from the bridge?

Stupidity. The bridge, turned into a viewing platform - for beauty. 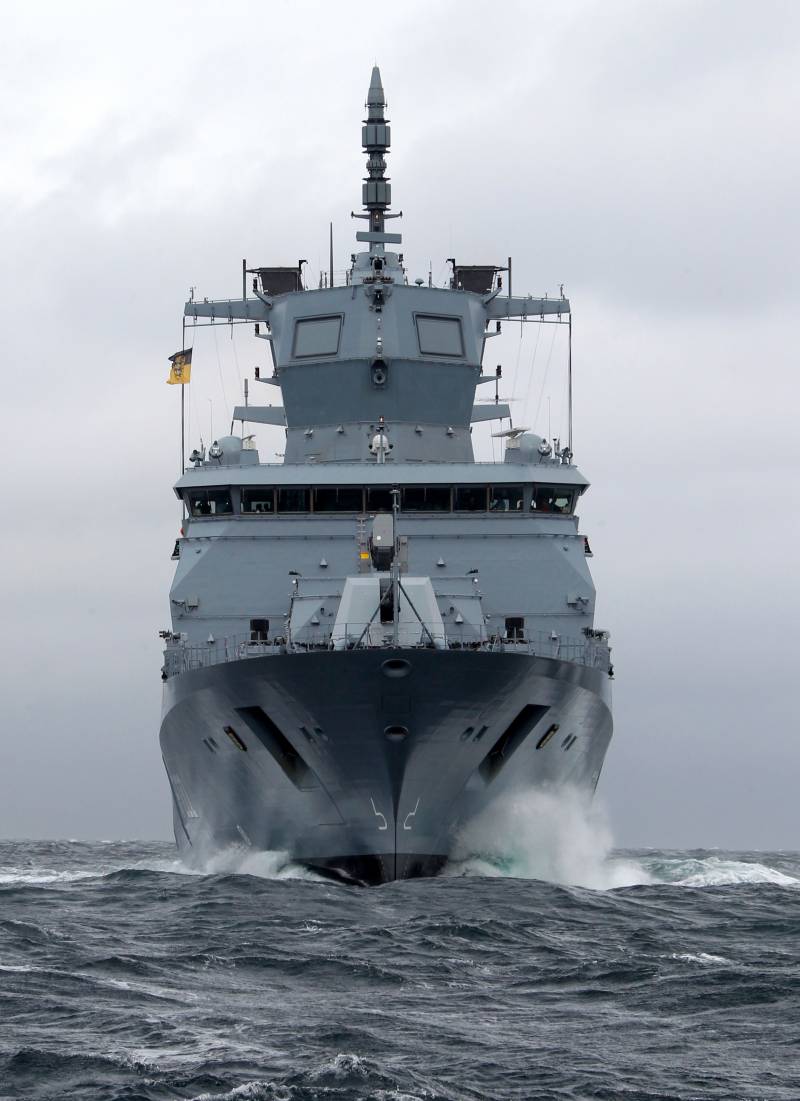 A new German frigates - for service in peacetime.

From here - tall sides and superstructure. Giant hangar, walls and roof. What's inside? Inside - four inflatable boats. And a box of gas flow ducts.

“Baden-Württemberg” - the apotheosis of modern trends in shipbuilding.

At the same time, we can not exclude such a moment. Like most European ships, the “Baden-Württemberg” comes into operation constructively underloaded. If necessary, additional armament can be installed on board. The most obvious option is the reserved space for the CIP cells in the nose of the frigate. Offhand - 16 PU type Mark-41. 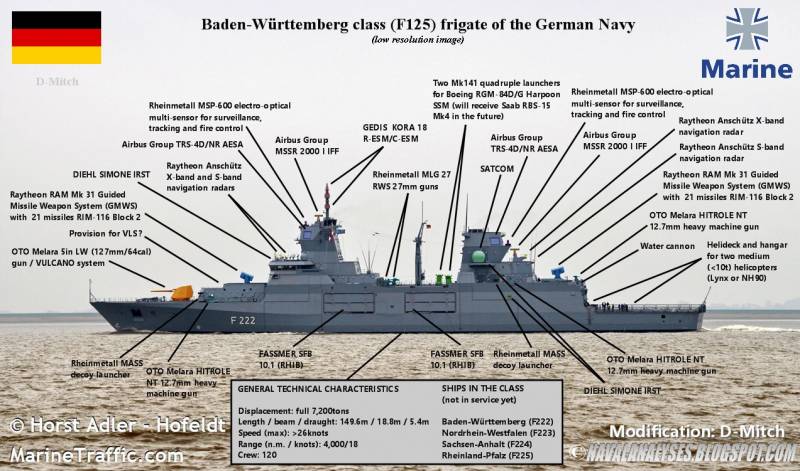 Of course, what has been said will not be able to cover that grand difference in armament, radar and SLA between Baden and the outdated Saxony. But, obviously, the full draft of the F125 project, in its current state, is slightly less than the declared 7000 tonnes.

As an epilogue, you can add the following: in the construction of modern ships, large reserves are hidden. At change of conditions of technical creation, designers will easily realize any wishes of the customer. As easy as they can waste 7000 tons into emptiness.