October 11 2017
12
Due to the lack of reasonable alternatives, almost all aircraft of the first half of the last century were equipped with piston engines and propellers. To improve the technical and flight characteristics of the equipment, new designs of propellers were proposed that had certain features. In the mid-thirties, a completely new design was proposed, allowing to obtain the desired possibilities. Its author was the Dutch designer A.Ya. Decker.


Work in the field of screw systems Adriaan Jan Dekker began in the twenties. Then he developed a new design of the impeller for windmills. To improve the basic characteristics, the inventor proposed using planes that resemble an airplane wing. In 1927, this impeller was installed in one of the mills in the Netherlands and was soon tested. By the beginning of the next decade, three dozen such impellers were commissioned, and in 1935 they were already equipped with 75 mills. 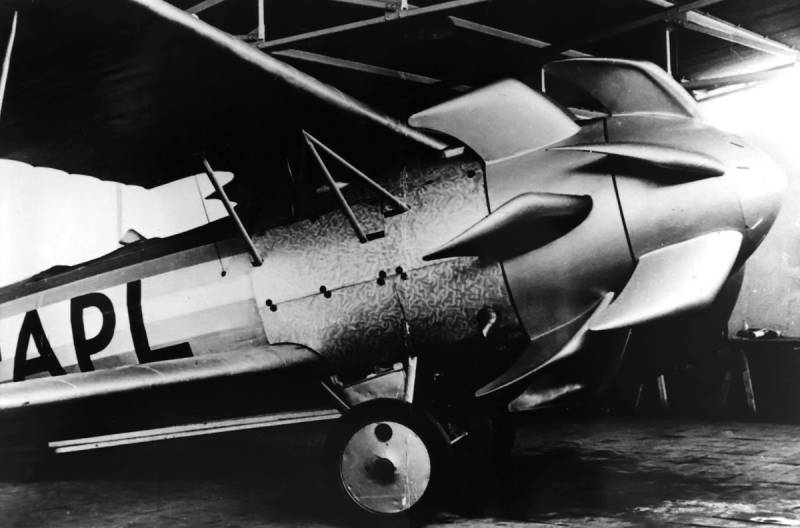 Experienced aircraft with a propeller A.YA. Decker Photo by Oldmachinepress.com

In the early thirties, after testing and introducing a new design in mills, A.Ya. Dekker suggested using similar aggregates in aviation. According to his calculations, a specially designed impeller could be used as an airplane propeller. Soon this idea was framed in the form of necessary documentation. In addition, the designer took care of obtaining a patent.

The use of a non-standard propeller design, as conceived by the inventor, should have given some advantages over existing systems. In particular, it was possible to reduce the speed of the screws when receiving sufficient thrust. In connection with this invention A.YA. Decker is often referred to as “Low-speed propeller” - Low rotation speed propeller. Also this construction was called and in patents.

The first patent application was filed in the 1934 year. In late July, 1936 A.Ya. Dekker received a British patent number 450990, confirming his priority in creating the original screw propulsion. Shortly before the first patent was issued, another application appeared. A second patent was issued in December 1937 of the year. A few months before the Dutch designer sent documents to the patent offices of France and the United States. The last one at the beginning of 1940 of the year issued the document US 2186064. 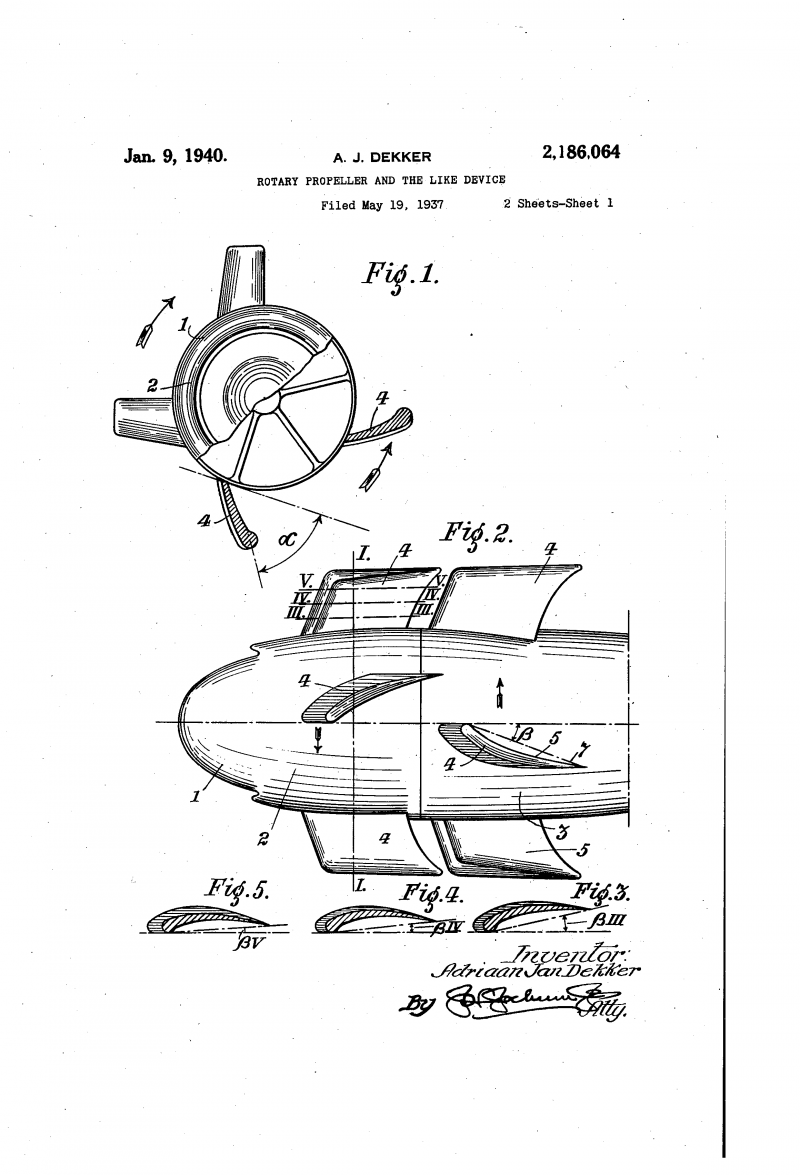 The design of the screw of the second version. Patent drawing

British patent No. XXUMX described an unusual propeller design capable of providing sufficient performance with a certain reduction in negative factors. The designer suggested using a large oval-shaped propeller hub, smoothly turning into the nose of the aircraft fuselage. Large blades of unusual shape should be rigidly fastened on it. The original contours of the blades, as A.Ya. Decker, could lead to the desired result.

The blades of the “low-speed” propeller should have a small elongation with a large chord length. They should be mounted at an angle to the longitudinal axis of the hub. The blade received an aerodynamic profile with a thickened nasal honor. The sock of the blade was proposed to be swept. The tip was located almost parallel to the axis of rotation of the screw, and the rear edge was proposed to be curved with a protruding end part. 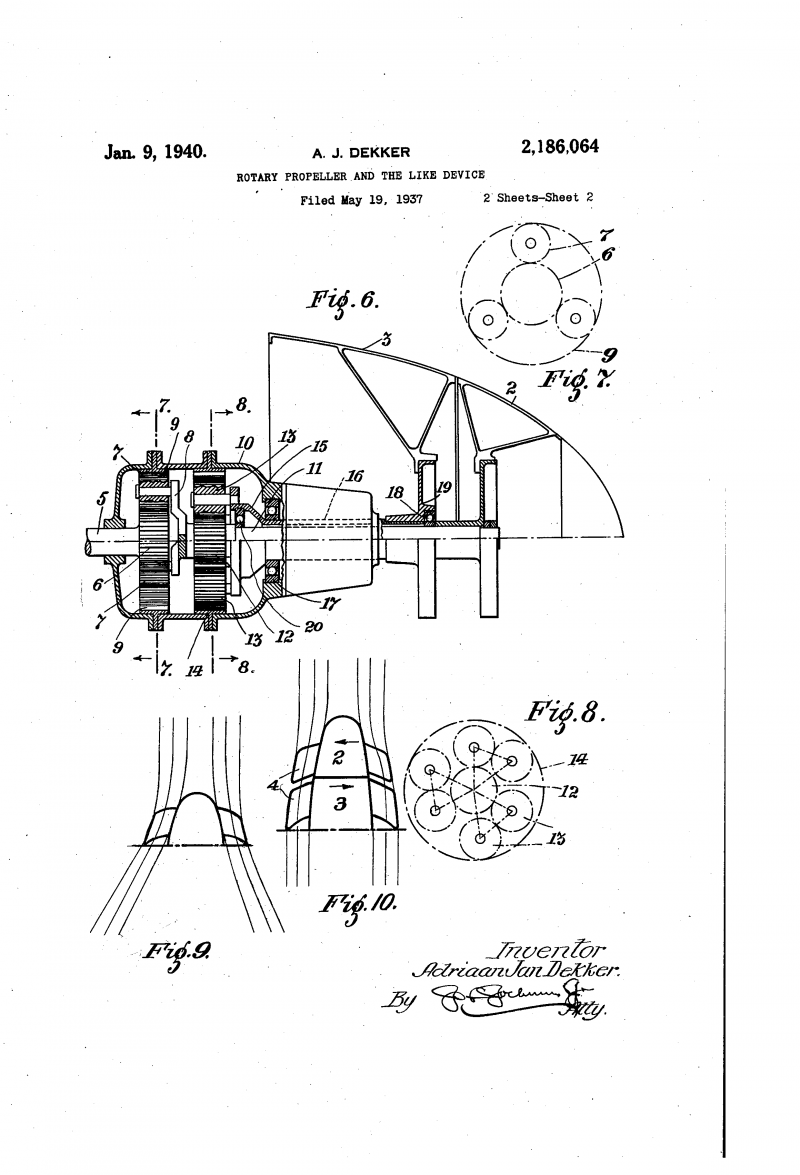 The internal structure of the screw and gearbox. Patent drawing

The first 1934 project of the year involved the use of four blades. A screw of this design was supposed to be mounted on a shaft extending from the gearbox with the required characteristics. A significant area of ​​propeller blades in combination with an aerodynamic profile should have provided an increase in thrust. Thus, it was possible to obtain sufficient traction at lower revs compared with the propeller of the traditional design.

Already after filing the application for the first patent A.Ya. Dekker tested an experienced screw and made certain conclusions. During the test, it was found that the proposed design has certain disadvantages. Thus, the air flow behind the screw diverged to the sides, and only a small part of it ran along the fuselage. This led to a sharp deterioration in the effectiveness of tail rudders. Thus, in its current form, the Decker screw could not be used in practice.

Further study of the original propeller led to the appearance of an updated design with a number of important differences. It was she who became the subject of the second British and first American patent. Interestingly, the document from the United States, in contrast to the English, described not only the screw, but also the design of its drives.

The updated product Low rotation speed propeller should have included two coaxial propellers of opposite rotation. The front screw is still proposed to build on the basis of a large streamlined hub. The blades of the rear screw should be attached to a cylindrical unit of comparable size. As in the previous project, the front propeller screw and the rear ring could perform the functions of an aircraft nose cone.

Both screws were to receive blades of a similar design, which was a development of the first project. Again it was necessary to use significantly curved blades of small elongation, having a developed aerodynamic profile. Despite the swept front edge, the profile length increased in the direction from the root to the tip, forming a characteristic bend of the trailing edge.

According to the description of the patent, the front screw should have been rotated counterclockwise (when viewed from the pilot's side), the rear screw - clockwise. Blades of the screws should be mounted accordingly. The number of blades depended on the required characteristics of the screw. The patent cited a design with four blades on each screw, while a later prototype received a greater number of planes. 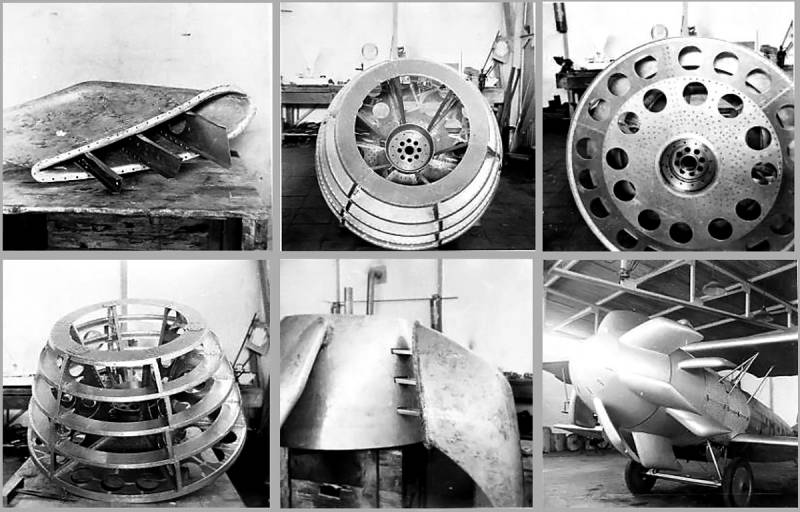 The process of assembling the original screws, you can consider the internal elements of the product. Photo by Oldmachinepress.com

In the US patent described the design of the original gearbox, which allowed to transfer torque from one engine to two screws of opposite rotation. It was proposed to connect the motor shaft with the sun gear of the first (rear) planetary gearbox contour. With the help of a gear ring fixed in place, the power was transmitted to the satellite gears. Their carrier was connected to the shaft of the front screw. This shaft was also connected to the sun gear of the second planetary gear. The rotating carrier of its satellites was connected to the hollow shaft of the rear screw. This design of the gearbox allows you to synchronously adjust the speed of rotation of the screws, as well as to ensure their rotation in opposite directions.

As conceived by the inventor, the main thrust was to be created by the blades of the front screw. Back, in turn, was responsible for the correct redirection of air flow and allowed to get rid of the negative effects observed in the basic project. After two coaxial screws, the air flow passed along the fuselage and had to normally blow the tail plumage with the rudders. To obtain such results, the rear screw could have a reduced rotation speed — about a third of the front revolutions.

The original propeller screw was created taking into account the possible implementation of new aircraft in new projects, and therefore it was required to conduct full-fledged tests. At the beginning of 1936, Adriaan Jan Dekker founded his own company, Syndicaat Dekker Octrooien, which was to check the original propeller and, when receiving positive results, to promote this invention in the aviation industry. 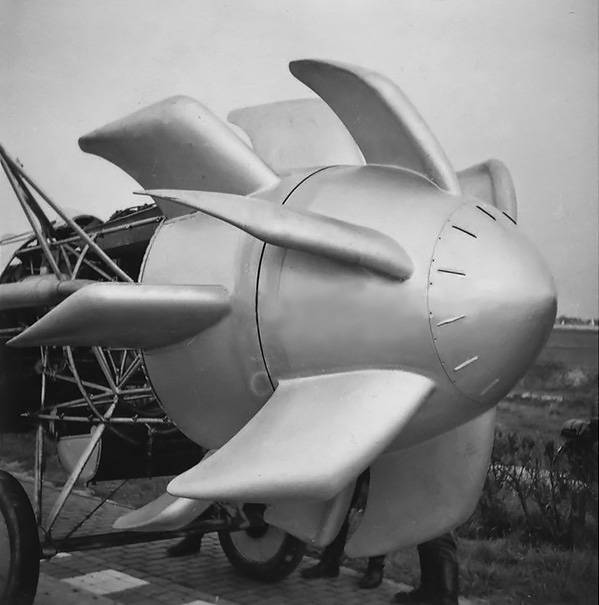 Ready to screw on the plane. Photo by Oldmachinepress.com

At the end of March of the same year, the Decker Syndicate acquired the Fokker CI multipurpose biplane aircraft built in the Netherlands. This machine with a maximum take-off weight of just 1255 kg was equipped with a BMW IIIa gasoline engine with an HP 185 power. With a standard two-bladed wooden propeller, it could reach speeds up to 175 km / h and go up to heights up to 4 km. After a certain restructuring and installation of a new propeller, the biplane was to become a flying laboratory. In April, 1937, the company A.YA. Dekker registered the upgraded aircraft; he got a PH-APL number.

During the restructuring, the prototype aircraft lost its hood and some other details. Instead, they placed an original gearbox and a pair of “low speed rotors” in the nose of the fuselage. The front screw received six blades, the rear - seven. The basis of the new screw was a pair of hubs assembled from an aluminum frame with a lining of the same material. The blades had a similar design. In connection with the installation of the screws, the nose of the machine changed its shape in the most noticeable way. At the same time, the cylindrical rear screw fairing did not protrude beyond the fuselage skin.

Tests of the flying laboratory with the original propeller started in the same year 1937. The ground for them was Ipenberg airfield. Already in the early stages of inspections, it was found that coaxial screws with small extension blades can indeed create the required craving. With their help, the car could perform taxiing and jogging. In addition, from a certain time, the testers tried to lift the car into the air. It is known that an experienced Fokker CI was able to make several flights, but it wasn’t a full takeoff. 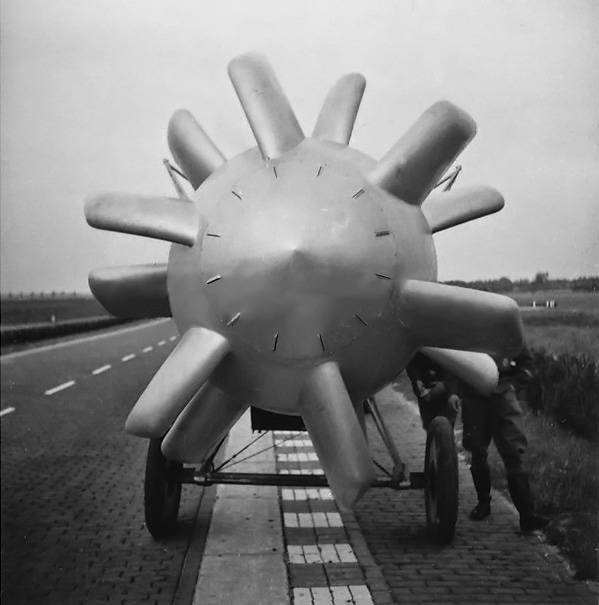 Tests of the prototype allowed to identify both the pros and cons of the original project. It was found that a pair of screws of opposite rotation is really capable of creating the desired thrust. At the same time, the motor-mounted assembly was distinguished by its relatively small size. Another advantage of the design was the reduced noise produced by the blades of small elongation.

However, it was not without problems. Air screw A.Ya. Dekker and the gearbox he needed differed from the existing samples by the excessive complexity of manufacturing and maintenance. In addition, the experimental screw mounted on the Fokker CI showed insufficient thrust performance. He allowed the plane to move on the ground and to develop a sufficiently high speed, but for flying its thrust was insufficient.

Apparently, the tests continued until the very beginning of the forties, but for several years did not lead to real results. Further work prevented the war. In May, 1940, Hitler's Germany attacked the Netherlands, and only a few days later an experienced aircraft with unusual propellers became the trophy of the aggressor. German specialists are expected to show interest in this development. Soon the flying laboratory was sent to one of the airfields near Berlin. 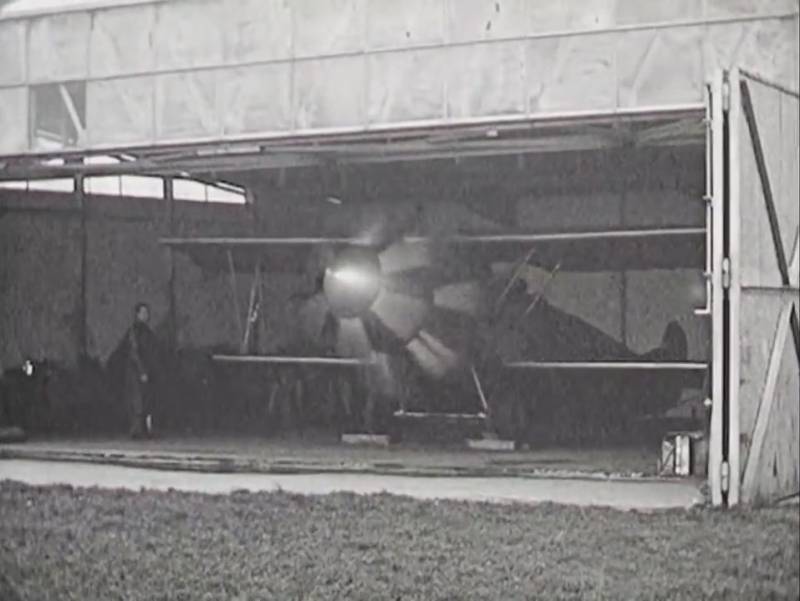 Starting the engine, the screws began to rotate. A shot from the newsreel

There is information about the conduct of some tests by German scientists, but these checks ended fairly quickly. According to some information, the very first attempt of the Germans to lift the plane into the air ended in an accident. The car did not begin to recover, and on this история bold project over. The only aircraft equipped with screws of the type Low rotation speed propeller, could not show its best, and therefore refused the original idea. In the future, only propellers of the traditional look were massively used.

According to the ideas underlying the original project, a special “propeller with a low speed of rotation” was to become a full-fledged alternative to traditional design systems. Differing from them in some complexity, it could have advantages in the form of smaller dimensions, reduced revolutions and reduced noise. However, there was no competition. Development A.Ya. Dekker could not even pass the entire test cycle.

It is possible that, as further development proceeds, original propellers would be able to show the desired characteristics and find application in various projects of aviation technology. However, the continuation of work slowed down due to various problems and circumstances, and in May 1940, the project was stopped due to the German attack. After this, an unusual idea was finally left without a future. In the future, promising designs of propellers were re-worked in different countries, but direct analogues of the Adriaan Jan Dekker system were not created.