October 11 2017
4
And again Spain is on the agenda. At this time, the "silent majority" flooded the streets of Spanish cities; various mass media called such shouting crowds such a furious term. Firstly, it’s almost impossible to determine the majority. The modern information space so skillfully changes the opinion of the electorate and in such a short time that the “majority” is an empty definition that exists only for a couple of weeks. Secondly, the adjective “silent” involuntarily draws a picture of conservative adequate moderate citizens, and this is just under a big question. 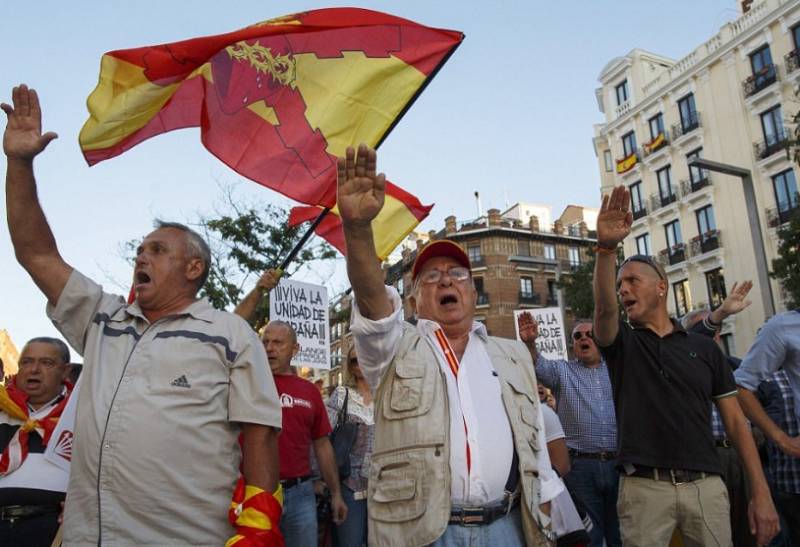 But a little step back. Spain, in fact, the union of medieval "states", and its история extraordinarily florid. The Phoenicians, the Greeks, the Carthaginians, the Romans, the Visigoths, the Moors — who were not there. At the same time, the country itself was divided into peculiar sectors of influence. And only by the end of 15-th century, Spain acquires a recognizable look today. It even blooms, according to the old European habit, producing everything possible from its colonies. However, fragmentation not only failed, on the contrary, it became, so to speak, a national tradition, burdened by imperial complexes. In well-fed times, this is only a boyish competition for the title of the most beautiful city, the ancient land, etc. Simply put, the game of parochial ego. But in crisis years, the cold phase gives way to hot. 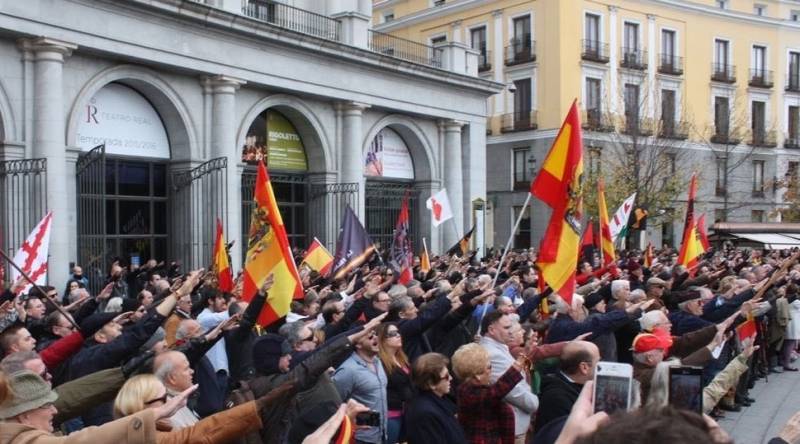 During the Napoleonic Wars, for example, part of the Spaniards fought against France, being allies of Wellington, who landed in Portugal, and some turned weapon against the British and, accordingly, against their compatriots. However, the whole 19 century was a series of bloody internal coups and wars for Spain.

The number of claims from different regions to each other naturally increased. Spain, divided into autonomous regions 17, is extremely sensitive to the manifestation of any kind of separatism of varying intensity depending on the region. Moreover, these processes are prone to atomization and descent to the household level - unusually dangerous, peculiar to its intolerance and unpredictability.

From personal contact with representatives of Spain, I will note that parochial patriotism is a very powerful factor. At the same time, we should not confuse it with our feeling of a “small Motherland”, which is characterized by sentimentality, at least in most cases. Love for the native lands of the Spaniards is somewhat selfish nature of pride. Even within one region, cities are involved in some kind of irreconcilable competition. For example, the inhabitants of Málaga, part of Andalusia, derogatively throw in the direction of the capital of the region of Seville a local idiom - “typism”. Roughly speaking, it means - “too much boast”. So, the inhabitants of Malaga emphasize the excessive theatricality of Seville, its narcissism and arrogance, whereas they certainly consider themselves more sincere and distinctive.

His special to be emphasized and Valencians. They will surely remind you that, unlike the Catalans, they were occupied by the Arabs. And that means culturally richer, deeply individual and not so spoiled. At the same time, the Valencians themselves are unusually stung by the reputation of the “supplier of oranges,” which they have earned throughout Spain, thanks to the masterly cultivation of these fruits. Therefore, the inhabitants of Valencia are climbing out of their skin, in order to show their efficiency, the marine character of a large port, in short, they are eliminating the complexes. In the end, it looks like a feminist in men's work - don't wait for good. 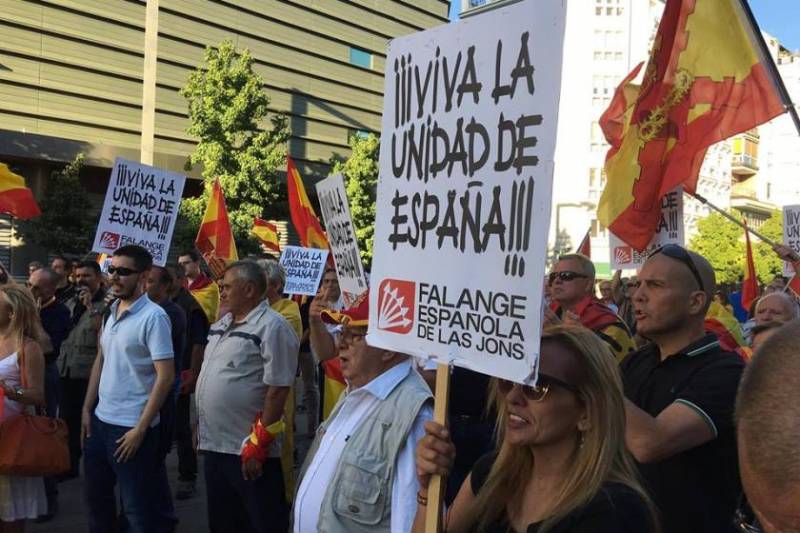 Thus, in the light of the Catalan crisis, we get an open field for informational provocations and resuscitation of political corpses.

It's time to return to our "silent majority." Very little was said about the “quality” of these “saviors” of united Spain. And in vain. After all, the present silent majority is rather dull. To inflame it on a real “movement”, ideas and pain points are needed, as well as groups of active comrades who, like encephalitic ticks, will spread them.

Alas, these "comrades" turned out to be, it would seem, sunk into oblivion, the Phalangists, who cherish the dream of reviving the Spanish Empire with the characteristic exploitation of the colonies. The political skeleton in the closet, which the European Union Spain had swept under the carpet for so long, got out and began to build meat on the old bones. 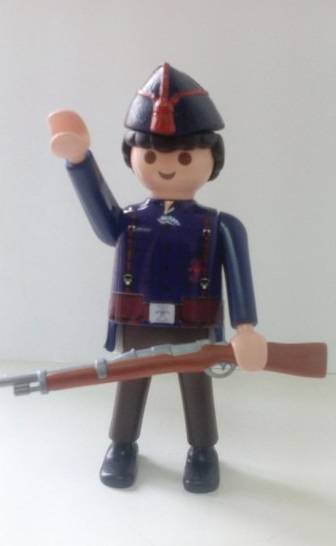 With such "soldiers" anyone can amuse themselves by buying them in the official online store of the Spanish phalanx. There you can pribarakhlitsya clothes, flags and literature.

After the fall of the Francisco Franco regime, who had crushed the Spanish phalanx and made it a powerful and only party in the country (not counting various branches, such as the female wing of the phalanx), the party disintegrated into many organizations and movements. But ideas, with whatever political potential, are not thrown into the garbage. Therefore, despite over a hundred thousand missing people under the Franco regime of people, a fragmented phalanx lived quite well. Moreover, she tried with all her might to get out of the marginal environment, however, while retaining all the “advantages” of marginality - loudness, the strength of the street crowd, the enthusiasm of the thugs, etc. For example, the ideological official Phalangists of the new persuasion in every way otbryvayutsya from their hot "love" to Hitler and Franco, while in every way romanticizing the image of its creator José Antonio, who simply did not have time to roll himself Goebbels reputation. 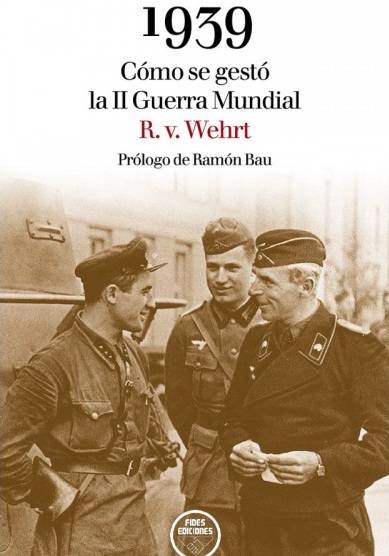 The ideological literature of the modern Phalangists, who are trying to shed brown marginality in a very European style. Edakie reflections who started World War II. I wonder is not it ...

Apparently, not a single sensible idea of ​​“united Spain”, except for the nationalist phalanx, could be obtained from the bins of history. And the Catalan crisis was just a gift to make itself louder and rally. La Falange, Falange Espanola de las JONS and Falange Autentica, formerly competing in accepting the ideological legacy of the phalanx, after the demarche of Barcelona, ​​burst out with exactly the same statements. 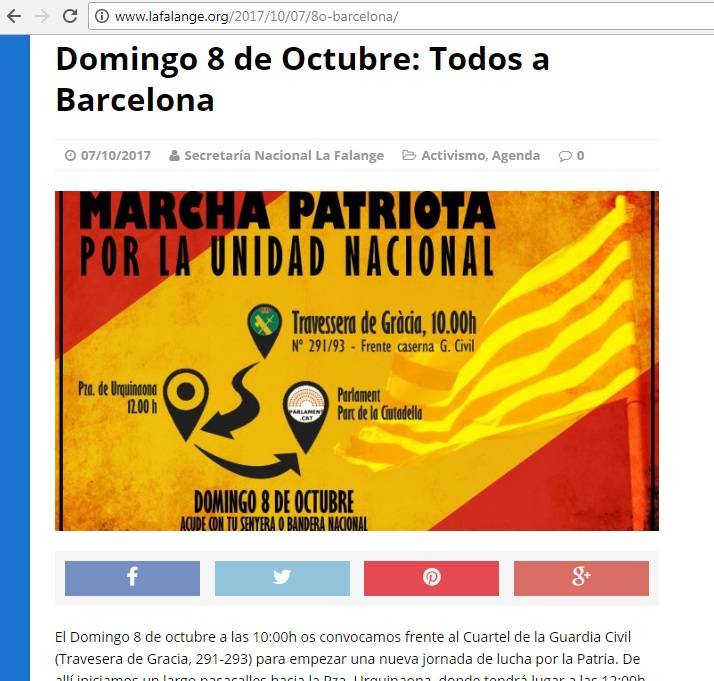 Call to go "to Barcelona" 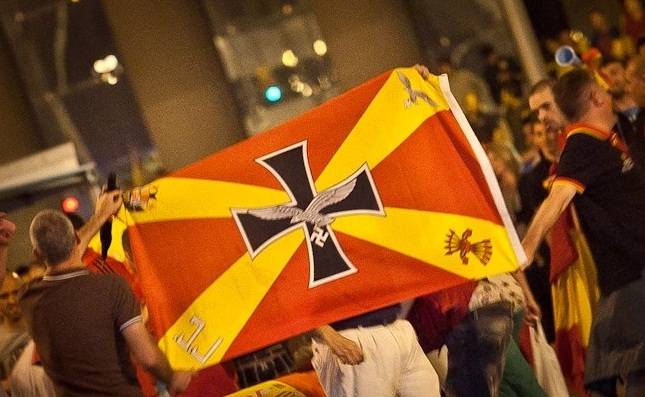 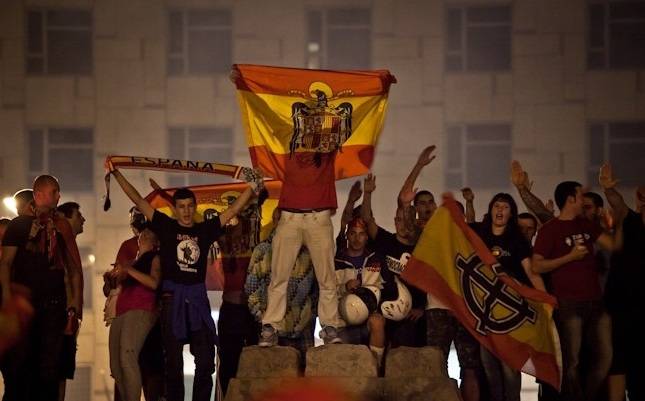 At the same time, the internal political outlook of the seemingly new Phalangists is no different from the far right in other countries. Fighting "bulls" from football fans, the characteristic flirting with Nazi symbols and, of course, the thorough laundering of the political facade - everything is trivial, as if for a carbon copy. Therefore, in the context of the Catalan events, these guys have skillfully merged with the "silent majority" and only expanded their electorate.

Ctrl Enter
Noticed oshЫbku Highlight text and press. Ctrl + Enter
We are
Catalan TrampetzResults of the week. "Well, do not change me because of every idiot!"
Military Reviewin Yandex News
Military Reviewin Google News
4 comments
Information
Dear reader, to leave comments on the publication, you must to register.