As soon as Poroshenko’s regime falls, and how hard Ferguson's blacks live ...

October 11 2017
114
Literally on any broadcast of any political talk show on Russian channels, if there is one or another invited Ukrainian “expert” (from Kovtun to Karasev mixed with “hero” who asked Putin, Tsymbalyuk), you have to hear the same thesis: yes you can calm down (Russians) already - your reserve fund has come to an end, and you are still talking about some kind of military confrontation with the US and NATO. It is noteworthy that after such a hairpin from ukroekspert, the participants of the programs present in the hall frankly get lost with the answer and even get into the pose of the defenders with the argument in the style of “fool himself! look at your Ukraine! ”Not ready? Lost the scent on assessing the internal situation?

But look. And we are not looking at Russia at the level of the same political talk shows. Such parsley, ladies and gentlemen, citizens, comrades. We do not look at all. Once again, we have to admit that the discussion of the internal situation on federal TV channels is openly turning into a closed topic, which is easy to follow on the air. On the one hand, this is the policy of the federal media, which, as they say, has its own song - ratings, ratings, airs, copiers for the presenters and programs ... On the other hand, the viewer wants a choice. Or, you say, what does the viewer want to do? What is served on a plate, then let him watch - no, so don't let TV watch the blue screen in favor of the blue screen of the PC.

I decided to conduct a small experiment and watched several 60 Minutes TV programs in a row on Russia Channel, as well as The Right to Voice programs on TVC channel. I’m not mistaken if I say that, although we are here with you with all the might of the liberals, but, surprisingly, it is only from them that we have to hear the words about the internal Russian agenda in these very broadcasts. Yes, through the endless Ukrainian, Syrian, Turkish, Catalan, Ferguson, Las Vegas, hacker and anti-hacker subjects. Yes, usually at the level of hypocrisy. Yes, more often in the style of the same Ukrainian guests, exuding bile. Yes, with the terms "failure", "unpromising", "economic loosing", "oligarchic capital". But the whole problem is that none of the ten extreme ethers had as such the main topic of discussion of the state of affairs in Russia, the state of the economy, the search for growth tools - whether it was negative, positive, neutral, including inviting experts Economists of both the liberal and the counter-liberal bloc - it wouldn’t be lo. And it would be - they would discuss not only with liberal and ukromaydannyh subring and answers in the mentioned style “yes in Ukraine is even worse!”, But really soberly - with different points of view, in disputes that give birth to the truth, and not, sorry, srach .

Apparently, the viewer does not have to think about such topics ... Otherwise, what good questions will begin to ask: why is it in Ukraine, which is going from air to air, from publication to publication (and we, by the way, too), we bury through one is the annual economic growth quite comparable with the Russian one? Why is Ukraine, which we, retransmitting and slightly reinterpreting Obama's rhetoric, call a country with an economy torn to shreds, does not sink to a many-month delay in wages and pensions - albeit frankly low, but stably paid (not in the image and likeness of Yeltsin's 90's) ? Why kilowatt * hour of electricity in the “Square” on average continues to be cheaper than our kilowatt, considering that the country is buying Maidan’s hysterics with reverse-reversals, coal is being transported from South Africa, then from the USA, then from Australia, and oil wells this country practically does not exist at all ... Why does Russia broadcast thousands of programs, like “everything is bad with neighbors,” and at the same time continues to remain the main investor in the Ukrainian economy? 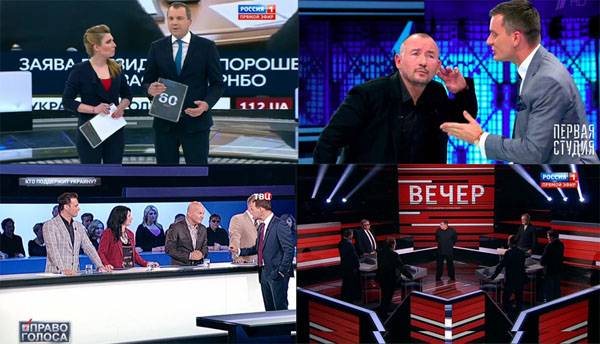 I suppose that if someone (besides the author of this material) has this kind of comments and questions to our economic gurus, then all of us, of course, will immediately be announced motivated followers of the Kiev regime, people, zombied bald head Kovtun, or pants with stripes Karasev or bristles Tsymbalyuk.

Well, we will have to carry this burden, which in no way cancels out questions about the domestic Russian agenda. And interest in this agenda, how to explain it, is quite normal: the Americans are interested in what is happening in America, the Moroccans - in what is in Morocco, the Mongols - in what is in Mongolia. So the ordinary citizens of Russia have a not idle argument: but in Russia everything will really change exclusively for the better if talk shows and the lion's share news issues will be devoted to which side Poroshenko's jacket is dented and how cruel Trump is towards Kim the third ...

No, and these topics are certainly worthy of discussion - even the themes of toilet paper for the Ukrainian army on the front line and how Assad, in the opinion of London and Washington, eats Syrian babies. But here the whole problem is in the sense of proportion. And as it turns out, when discussing political issues, it is not always and not enough for everyone.

And I can fully understand the fairing of any guests of the airs from Poland who are urging them to take up their economy before discussing how many millions of euros Warsaw lost from the ban on importing Polish apples. Here are just leading television broadcasts on federal TV channels economies in terms of solving macroeconomic problems are not intended to be engaged by definition. And those who each time put the topics of the airs in the style of "How many seconds are left before the fall of the Poroshenko regime" or "Kiev is about to freeze / die out from starvation / suffocate from the burning of the Chernobyl fires", apparently, the studios have appeared who rule the Russian economy: from representatives of relevant parliamentary committees to employees of the Ministry of Economic Development, the Ministry of Finance or the Central Bank.

Perhaps, only, no one, to anyone ... these experts are not invited on the air, so that they do not reveal the terrible secret that they can and can provoke an industrial and economic boom in the country ... They can make the economy go to rapid growth with double-digit annual interest ...

Apparently, everything is. Indeed, no one, in fact, thinks that many economic gurus of the financial block simply have nothing to say on the air, except that the country has a system of credit-privatization-optimization methods with the growth of “okolonol” in the presence of untold resources plus millions of workers and not empty heads. And what am I talking about, zombie American propaganda ... I'd better go - see how bad things are in Ukraine and how hard Ferguson's Negroes are.

Author:
Alexei Volodin
Photos used:
a collage of frames from Russia1, Channel One and TVC channels

Ctrl Enter
Noticed oshЫbku Highlight text and press. Ctrl + Enter
We are
Situational analysis of the death of the MH17 flight (Malaysian Boeing 777), made on the basis of engineering analysis from 15.08.2014Results of the week. “In our cooperative, the board is always agreed”
Military Reviewin Yandex News
Military Reviewin Google News
114 comments
Information
Dear reader, to leave comments on the publication, you must to register.