October 10 2017
21
SAR government forces and allied forces completely liberated from the militants of the Islamic State terrorist group * (ISIS, banned in the Russian Federation), the border with Jordan, in the south-east of Damascus province, the Syrian national agency SANA reported.


According to the agency, the army freed more than eight thousand square kilometers from the IS and returned control over the remaining heights and areas along the border with Jordan, thereby completely clearing the south-east of Damascus province from terrorists. 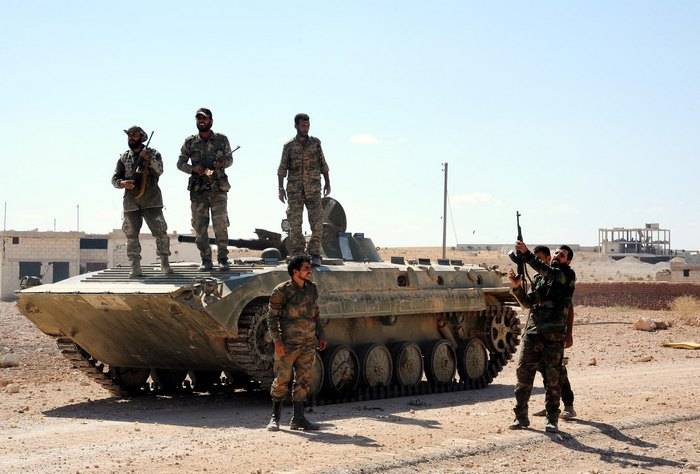 Last week, the Syrian army completed an operation in the east of the province of Homs, freeing thousands of square kilometers of territory, including dozens of villages and settlements, from the 1,8 IG.

At the same time, information is coming in that the militants of the Islamic State terrorist group * are fleeing from the occupied residential quarters of the Syrian Deir-ez-Zor, fearing complete encirclement.

The terrorists of the IS *, fearing complete encirclement, try to escape from the residential areas of Deir ez-Zor towards Bukemal in groups. Small columns of SUVs and unsuccessful attempts to force the Euphrates from the west bank to the east by means of floating craft were recorded.
- said in a statement

Government troops are advancing from several directions. Already managed to clean up from the terrorists of the villages along the Euphrates.

In the city of Deir ez-Zor, according to the source, the terrorists are suffering heavy losses, the SAR army is developing the offensive with the support of the Russian Aerospace Forces, reports RIA News

Ctrl Enter
Noticed a mistake Highlight text and press. Ctrl + Enter
We are
China expands its amphibious capabilitiesGiant leap in robotization
21 comment
Information
Dear reader, to leave comments on the publication, you must to register.