Pentagon will write off half Ticonderoga cruisers

October 11 2017
75
One of the foundations of the surface fleet The United States Navy is a Ticonderoga missile cruiser. The ships of this project, capable of carrying a large number of missile, artillery and mine-torpedo weapons, have been used since the beginning of the eighties and solve a wide range of combat missions. Nevertheless, some of these cruisers are already quite old, and therefore in the near future should complete their service. The decommissioning of warships can lead to certain losses in the context of the overall combat effectiveness of the fleet.


The head cruiser USS Ticonderoga (CG-47), after whose name the entire series was named, was laid in the 1980 year and transferred to the Navy at the start of the 1983. In the summer of 1994, the fleet received the last 27 ship of the project. An interesting feature of the Tikonderoga project was the processing of an armament complex. So, the first five cruisers had specialized launchers for missiles of various types. All subsequent ships, starting with USS Bunker Hill (CG-52), equipped with universal vertical launchers Mk 41. 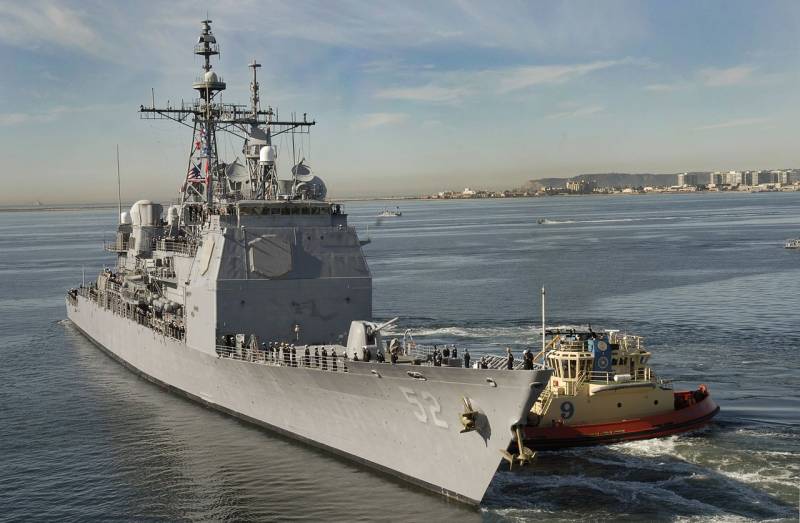 In 2004-2005, the first five ships of the series, distinguished by less sophisticated means of storing and launching missiles, were withdrawn from the fleet's operational strengths. Others, equipped with universal launchers, continued service. However, in the foreseeable future, the fleet will have to abandon them. Service life of cruisers are approaching the maximum allowable values, which accordingly affects their prospects.

In 2020, the ships USS Bunker Hill (CG-52) and USS Mobile Bay (CG-53), accepted into the US Navy in 1985, will celebrate the 35 anniversary service. At the same time, the maximum lifespan of Ticonderoga type cruisers is determined exactly at the level of 35 years. Thus, the American fleet will have to write them off and then send it for cutting. In addition, the pace of ship deliveries in the eighties of the last century should lead to the gradual abandonment of some of the remaining ships.

The American edition of Defense News not so long ago was able to gain access to a number of documents stipulating the further development of the surface fleet of the United States Navy. According to these papers, the command intends to write off 2026 Ticonderoga missile cruisers up to 11 of the year. Other ships, however, will have to undergo repairs and upgrades, the results of which will be able to continue service for the next few decades.

As a result of this reduction in the composition of the naval forces will remain only 11 cruisers from 27 built. As required, they will undergo repairs and upgrades that will extend the service life beyond the 35 years established for the first ships of the series. According to current plans, the remaining ships, starting with the USS Cowpens (CG-63), will remain in service at least until the mid-thirties. Last ships can only be written off in the mid-forties or later.

For a number of reasons, current plans for the removal of part of cruisers from the fleet have led to disputes at different levels. Such plans, directly related to the state of technology, can have serious consequences in the field of national security. There are certain risks in the context of the quantity and quality of weapons. In addition, there may be problems of an economic nature. The obvious way out of this situation, which allows to get rid of possible problems, is to keep the existing cruisers in the ranks.

Jerry Hendricks, a former US Navy officer and now Center for a New American Security analyst, commented on the current situation and plans as follows. He considers the inclusion of the oldest Ticonderoga cruisers into the Service Life Extension Program repair and upgrading program to be the right scenario. At a minimum, this will be cheaper than building new ships with the required characteristics. 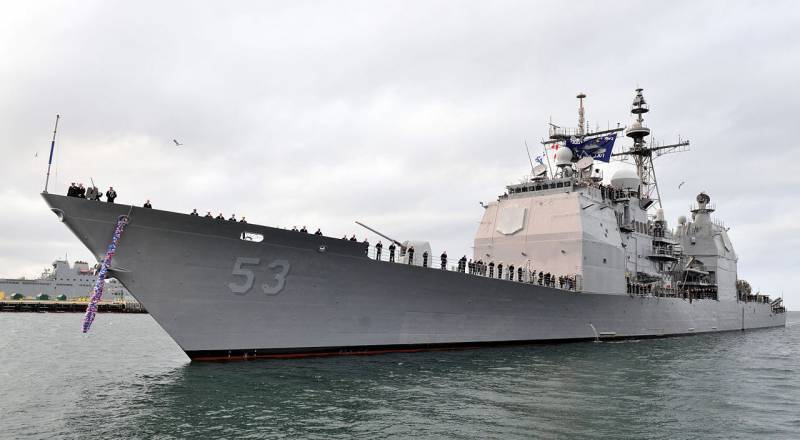 In addition, J. Hendricks noted certain difficulties associated with the ammunition of modern ships. Vertical launchers of Ticonderoga cruisers can simultaneously carry up to 122 missiles of various types. The only real replacement for such ships at the present time are destroyers of the Arleigh Bukre type, also equipped with Mk 41 installations. However, ammunition destroyers consists only of 96 missiles.

This means that when a destroyer is replaced by a destroyer, the fleet loses a quarter of the available missile cells. According to J. Hendrix, the naval forces really need these cells. "We need mass character - we need capacity."

The Defense News publication quotes Brian McGrath, a security specialist from the analytical organization The FerryBridge Group. He also believes that the decommissioning of old missile cruisers could hit the combat effectiveness of the surface forces of the US Navy. He agrees that including 11 ships in the Service Life Extension Program repair program is the best solution to the problems.

B. McGrath also touched on the topic of finance. He notes that current plans to reduce surface forces clearly speak of the economic problems of the fleet. To create a balanced program of modernization, maintenance, procurement, etc. serious amounts are needed. In this case, however, the command, figuratively speaking, now cuts not the skin and not fat, but the bones of the fleet. The reasons for this lie in the ambiguous policy of the authorities. The new owners of the White House talk about the need to build a fleet of 350 surface ships, but they do not allocate adequate funding. B. McGrath called such actions of the authorities sad and irresponsible, and also urged to stop them.

In accordance with the existing plans, all remaining 22 rocket cruisers of the Ticonderoga type will continue to serve until the 2020 year, after which the oldest representatives of this group will begin to be phased out. Before 2026, 11 ships that served their 35 years would be taken out of service. At the same time, other cruisers will be upgraded, on the basis of which they will be able to continue service until the mid-forties.

The main problem of the planned program of reducing cruisers is the reduction of the total ammunition of the surface fleet with corresponding consequences in the context of its combat effectiveness. Ticonderoga type ships are distinguished by the presence of several launchers with 122 cells for various types of missiles - 26 more than the destroyers Arleigh Burke. It is easy to calculate that during the decommissioning of 11 cruisers, the fleet as a whole will lose its 1342 starting cells. During the construction of X-NUMX, the new destroyers Arly Burk will be able to compensate for most of these losses, but the total ammunition load will be reduced by two and a half hundreds of conventional missiles.

Such losses can be compensated to some extent with the help of new multi-purpose nuclear submarines carrying cruise missiles of the Tomahawk family. However, the potential of such a “compensation” is not too great. Virginia-type submarines, under construction, regardless of the modification, carry only 12 cruise missiles. In addition, the submarines, for obvious reasons, can not carry anti-aircraft missiles of various types that are part of the ammunition surface ships. As a result, destroyers and submarines - with all their advantages - will not be able to fully replace write-off ships of the Ticonderoga type.

The universal Mk 41 launcher can be used to fire missiles of various types. Among others, the ammunition of such a system may include interceptor missiles used as part of an anti-missile defense. It is curious that the future reduction of missile cruisers will not have a negative impact on the development of the US strategic naval missile defense system. 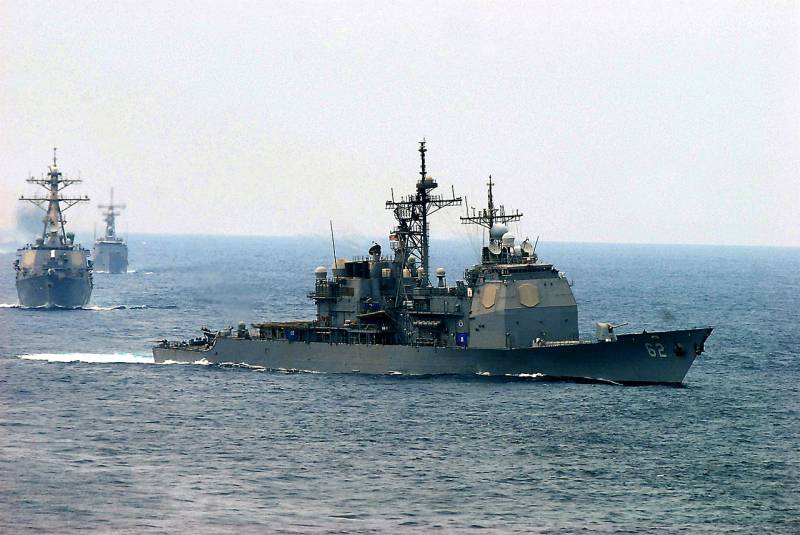 In the past, at the stage of developing the necessary projects, the command made a fundamental decision: despite a certain unification of the onboard systems of Ticonderoga cruisers and Arleigh Burke destroyers, the main carriers of the Aegis BMD (Ballistic Missile Defense) anti-missile system will be the last. However, several cruisers also received similar equipment. Five Ticondeur ships equipped with missile defense systems are not yet subject to a reduction program and will be able to continue service in the future.

At the design stage, the service life of the Ticonderoga missile cruisers was limited to 35 for years. The first ships of the series were decommissioned long before the development of the assigned resource, while the remaining ships were already approaching the indicated dates. In accordance with the new plans of the Pentagon, half of the existing cruisers will be upgraded and will continue to serve, and the rest will have to leave the fleet and continue to go for recycling.

The intention to abandon obsolete ships with expiring service does not seem unexpected or surprising. At the same time, however, such logical steps can have serious consequences for the combat capability of the surface fleet. How exactly it is proposed to solve them is not completely clear. Obviously, the lack of deployed missiles will have to be compensated by new ships.

Another interesting consequence of the current plans will be certain difficulties in the course of the desired development of the Navy. In accordance with the instructions of the authorities, in the foreseeable future, the surface grouping of the US Navy should have more than three and a half hundred warships. The implementation of such plans is associated with certain difficulties, and reducing the number of cash ships will further complicate the solution of the task.

It is obvious that the existing grouping of Ticonderoga-type missile cruisers has noticeable problems, and some of these ships may need to be replaced. An equivalent replacement for cruisers, however, is missing. Thus, several specific problems and challenges now face the US command, on the solution of which the further development of the naval forces depends. Several years remain before the launch of the withdrawal of cruisers from service. During this time, the Pentagon can find the best solutions to existing problems that can reduce the negative effects and lead to the desired results. However, negative scenarios cannot be ruled out yet. How events will develop - time will tell.

Ctrl Enter
Noticed a mistake Highlight text and press. Ctrl + Enter
We are
The cruisers of the 68 bis project: the Sverdlov missions in the post-war fleet of the USSR. 3 part"Svetlana". History of creation
75 comments
Information
Dear reader, to leave comments on the publication, you must to register.