In Syria, the crew of the Su-24 aircraft of the Russian Federation

October 10 2017
169
A tragic incident is reported at the Russian base of Khmeimim in Syria. During takeoff, a Su-24 front-line bomber crashed. According to some reports, the plane was unable to gain altitude after leaving the runway of the airfield. It is known that the members of the aircraft crew (pilot and navigator) were killed. The information is confirmed by the Russian Ministry of Defense. At the moment, the names of the dead Russian servicemen have not been announced. 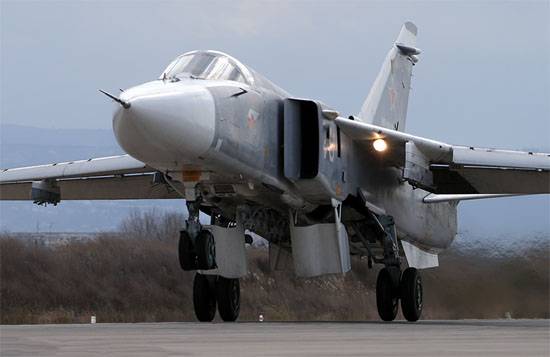 According to the latest data, the tragedy occurred this morning - at the moment of take-off to perform a combat mission. According to some reports, the plane was carrying on board a set of ammunition for striking the positions of terrorists. There is no data on the destruction at the Khmeimim airbase. Officially, the presence of a combat kit on board a front-line bomber of the Defense Ministry of the Russian Federation is not yet confirmed.
Ctrl Enter
Noticed oshЫbku Highlight text and press. Ctrl + Enter
We are
The accidents of military aircraft in Russia over the past 10 years
Military Reviewin Yandex News
Military Reviewin Google News
169 comments
Information
Dear reader, to leave comments on the publication, you must to register.