Ankara - Moscow: do not give C-400 technologies, we will agree with the "other country"

October 10 2017
130
Weathervane of Turkish sentiment turned away from Russia and turned to ... You can not call it. The state of NATO - it is the state of NATO. And it is clear that such a state needs C-400 only together with production technologies. And Turkey does not recognize the "illegal annexation of the Crimea." This was announced by Mr. Erdogan. 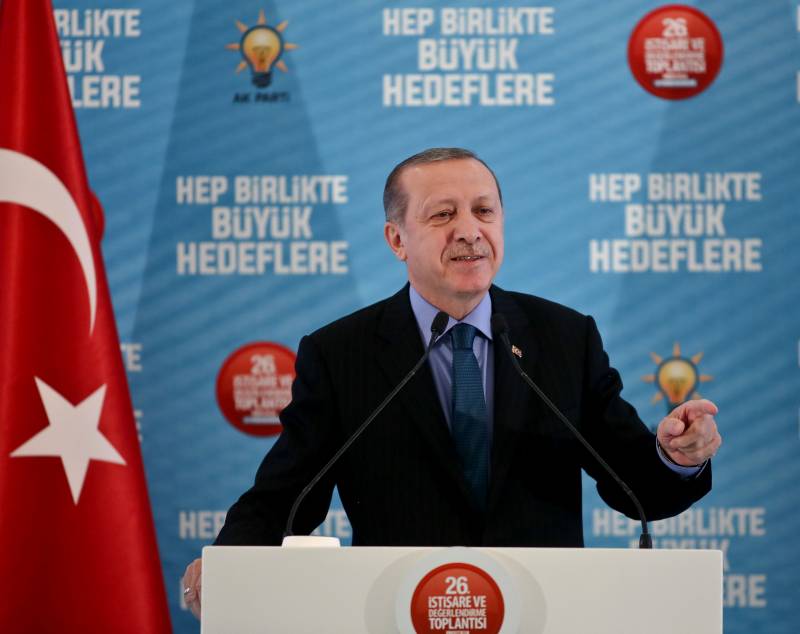 Not to give the buyer such technologies means to behave “negatively”. Approximately think so in Ankara. And they not only consider, but speak openly.

Turkish Foreign Minister Mevlüt авavusoglu gave an interview to the newspaper Akşam. This interview was a kind of policy statement and turned out to be a “bomb” for the Russian media.

From the statements of the Minister, it is possible to clarify the following: Ankara may refuse to acquire from Moscow the C-400 anti-aircraft missile systems. Moscow has only one way to deal: conclude an agreement on joint production with Ankara. The secret of this minister did not.

“We did not receive any official refusal on this topic. Putin himself told us that we can take steps for joint production. Therefore, the technology will be relevant. But if Russia has a negative attitude to this, then we can conclude an agreement with another country. ”

If the Russians do not give technology, Turkey can turn to other countries that are opposed to Russia for similar systems. Moreover, the minister made it clear that Turkey would put pressure on them: “We urgently need to buy [C-400] because there is a need for them. We need to protect our airspace. However, if countries against Russia do not want Turkey to buy C-400 from her, then they should give us their option. ”

Recall, Turkish President Erdogan 12 September reported that Turkey has signed an agreement with Russia on the acquisition of C-400. Deposit made. Later information was confirmed by V. Kozhin, Assistant to the President of Russia on issues of military-technical cooperation. He stressed at the same time, notes TASS, that "the issue of the transfer of Turkey to the production technology of anti-aircraft systems C-400 is not discussed."

Who influenced the decision of Ankara? Or is Ankara playing its own game? Do not like our conditions - we will leave you and go to a competitor? The latter is quite possible, since the Turkish "pressure" on a certain "country" has realpolitik roots: after the recent agreements of Saudi Arabia and Russia on the supply of the same C-400, the United States quickly approved the contract with Riyadh on the THAAD systems. Why not act so well with Turkey?

Information on the agreement of Moscow and Riyadh appeared 9 September.

As stated RIA News" Maria Vorobeva, a representative of the Federal Service for Military-Technical Cooperation, Russia and Saudi Arabia have agreed on the supply of C-400 and other weapons. “An agreement has been reached with the Kingdom of Saudi Arabia on the supply of C-400 air defense systems, Kornet-EM anti-tank missile systems, TOC-1A systems, AGS-30 automatic grenade launchers, Kalashnikov AK-103 assault rifles,” the agency leads her words.

In the Kremlin, commenting on this deal, they reported that contacts about its implementation are going "very positively."

This is interesting: with Saudi Arabia everything is “positive”, and the Turks are talking about something “negative”, I mean negative?

The answer to this question is. He came from the Bloomberg agency, which refers to the SAMI press release. It turns out that Moscow and Riyadh have signed not only contracts for the purchase of C-400, but also a memorandum involving the transfer to Saudi Arabia of technologies for creating the Cornet-EM complexes, the TOC-1A Buratino system, the AGS-30 grenade launchers, and AK- 103.

On the other hand, nothing is said about C-400 technology! So, here for the Saudis, too, a "negative" field begins. The issue of C-400 technology transfer is closed not for Turkey alone, but also for Saudi Arabia.

But Ankara would not be Ankara if it did not set its own conditions. Turkey - a partner so flexible that its international flexibility is probably surprised by itself.

However, the casket just opened. It's all about the USA. Not so Turkey and independent, as Erdogan sees it. Yes, and it is difficult to be completely independent, if you enter a military bloc.

If the Pentagon expressed "concern" regarding the intentions of Riyadh to purchase C-400 complexes, because the latter "are not operatively combined" with "American-made" systems, then God himself ordered Turkey to receive it from the hegemon. And it was stuck. Preventive. And Ankara, emboldened, grumbled, but decided to back out.

Warnings from the United States were heard in mid-September, when Ankara was already aware of the interest of C-400.

Highly respected in the US, Senator Ben Cardin, an influential man, sent letter to President Trump, in which he openly called for sanctions against Turkey. The reason for the restrictive measures was to be a deal to purchase C-400. The sanctions would impose penalties for all business partners of the Russian defense industry.

This is not to say that the emotional solution of the old Cardin would contribute to improving relations between the United States and Turkey, which were already spoiled.

President Erdogan sharply answered Washington: “Some were beside themselves with anger at the contract that Turkey and Russia signed for the supply of C-400 systems. And what should we do? Turkey has taken and will continue to take the necessary measures to ensure its security. "

And then he made a key statement: he said that both the United States and Israel themselves exacerbated the situation by refusing to supply Turkey with combat drones. As a result, Turkey itself has established their production!

Perhaps we add, Erdogan hoped that the Turks would produce C-400 on their own territory, and the Russians could be persuaded to be more compliant and transfer technology. In the end, Ankara and Moscow are now “partners” in Syria. In addition, Russia has a crisis, sanctions against Russia and cheap oil.

And now the minister speaks and talks about the "negative." And mentions countries "opposed to Russia." They say, not Russia, so these countries will give the appropriate complexes. Rather, the "other country" will give.

The Kremlin’s response to Mr. Peskov’s is well known. Presidential Spokesperson saidthat "contacts and negotiations at the expert level continue in the context of this transaction." He did not give any details.

As insists Kommersant, the Turkish military expected to get not only ready-made systems, but also access to technology. The goal - the assembly of "Triumphs" on its territory. Nevertheless, the Russian negotiators managed to achieve the signing of an agreement without technology transfer.

“We are talking about very serious technologies: it is impossible to take and build an enterprise for the production of such equipment in the field,” said Rostekh CEO Sergey Chemezov. - There must be appropriate qualified personnel, technology school. All this would have taken several decades. ”

Sources working in the system of military-technical cooperation, told the publication that the words of the head of the Foreign Ministry of Turkey by Russian structures are regarded as “an element of the political game.

“We have signed a serious contract, it contains all the legal subtleties and obligations of each of the parties,” said one of the anonymous interlocutors of Kommersant. “It’s just not possible to break the contract anymore.”

By the way, the source suggested that the statements of Cavusoglu were provoked history with the prospects of supplying C-400 to Riyadh: against the backdrop of an agreement to supply C-400, the State Department approved the Pentagon’s deal with the Saudis to sell THAAD in the amount of about 15 billion. “Perhaps, Ankara waited for the same step. It turned out to be a shame: they did not wait, ”the source commented.

Ankara does not have to rely on the transfer of technologies because Russian special services were against this form of cooperation. They consider it inappropriate to give a NATO member access to the C-400 components. The military expert A. Leonkov clarifies: the “Triumph” radar station, which is considered one of the most progressive in its segment, is of particular interest.

In addition to a harsh statement about “another country,” Ankara was noted by another high-profile performance. This time the speech was made by President Erdogan himself.

The President of the Republic of Turkey stated that Turkey does not recognize the illegal annexation of the Crimea. R.T. Erdogan reported this at a joint press conference with President Poroshenko in Kiev.

"I once again assured Poroshenko that Turkey will continue to support the sovereignty of Ukraine, its territorial integrity, including the Crimea, and political consolidation," Erdogan quotes "UNIAN".

“We did not recognize and do not recognize the illegal annexation of Crimea. We are very pleased with the support that Ukraine provides to the Crimean Tatars, who have proved loyalty to their country, ”he continued. According to the Turkish president, Ankara will continue to closely monitor the situation around the Crimean Tatars in the occupied Crimea, as well as to support this issue on the international agenda.

How many times at the highest level did they talk about “stabs in the back”? Here are two more blows, two more knives. There is already no living space on the back.

As for C-400, then, in general, everything is clear. Ankara plays in competition.

At the same time, it turned out that Turkey is interested in buying Patriot systems from the USA. About it reported The Daily Sabah newspaper, citing a source in the Turkish government.

The source confirmed the publication of the interest of the republic in the American systems. And the main condition (attention!) For the purchase of a Patriot missile defense system is the transfer of technology and co-production.

Obviously, the Turks want and technology, and local production, and the pliability of the "partners".

And which of the competitors will falter first?

Ctrl Enter
Noticed a mistake Highlight text and press. Ctrl + Enter
We are
Prospects for intervention in Syria. Turks and Saudis are preparing for war or bluffing?Tragedy in Ankara. Who blows up Turkey?
130 comments
Information
Dear reader, to leave comments on the publication, you must to register.