Support tanks in the realities of 1945 year

October 10 2017
36
Despite the fact that the tank itself is a very formidable war machine, as you know, one in the field is not a warrior. Even tanks in real combat conditions support is needed, infantry usually provided such support to tanks during the Second World War, which is especially true during urban battles. But the infantry could not always keep up with the fast armored vehicles, in this case they could be supported by armored personnel carriers or wheeled chassis vehicles with the appropriate weapons.


It is worth noting that this problem is relevant today. In the conditions of hostilities, BMP can provide support to tanks in the fight against enemy infantry armed with various anti-tank weapons. Also, to support tanks in battle can be used a combination of different types of equipment. For example, the Algerian armored units use a combination of Shilka ZSU and Land Rover off-road vehicles, which are equipped with Russian Kornet-E anti-tank systems, to protect their tanks. At the same time, a specialized vehicle was even created in Russia, called BMPT - a tank support combat vehicle. This tank tracked combat vehicle is able to operate successfully as part of tank formations, striking enemy tank-dangerous weapons in battle. The BMPT-72 "Terminator-2" is able to effectively suppress the enemy's manpower, equipped with anti-tank complexes and grenade launchers, various small weapons, as well as hit and armored targets (tanks, infantry fighting vehicles, armored personnel carriers).

In the 1945 year, the Red Army fighters could only dream of such armament, but already then they had at their disposal numerous wheeled jeeps and tractors, mainly American-made. Their chassis often became a platform for the installation of weapons, in particular, the Doji was widely distributed on which large-caliber 12,7-mm DShK machine guns were installed. The main purpose of such a machine was anti-aircraft functions, which did not limit the possibility of their use in other combat situations. 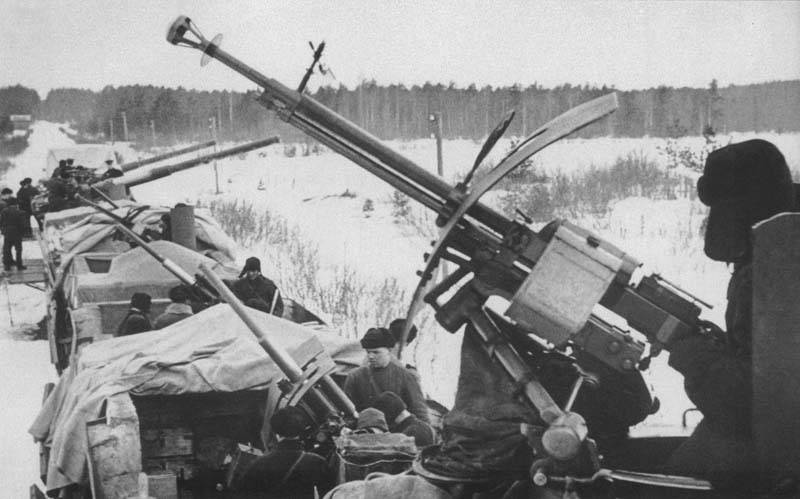 DShK on Soviet armored train, 1941 year
Although 12,7-mm DShK machine guns on lend-lease arrays were part of the anti-aircraft units of the Soviet tank units, very often, especially at the final stage of the war in 1945, they were used to protect tanks and self-propelled guns from German rocket launchers. Excellent visibility from the open body, combined with high speed and high power of a large-caliber machine gun, made it possible to effectively combat the enemy’s infantry. And the anti-aircraft gun placement in the back of an army SUV made it possible to fire more effectively on the upper floors of buildings during urban battles. Moving a little distance behind the tanks, they could provide them with cover, securing them from the faunters and grenade throwers. The high density of fire and the destructive power of 12,7-mm bullets could have discouraged anyone from risking their lives by attempting to hit the advancing armored vehicles.

Particularly active German infantry molested the Soviet tankers during urban battles, including in the battle for Berlin. The garrison of the city was well armed with various anti-tank weapons, including numerous faust-cartridges, which were also actively used by parts of the Volkssturm. By taking advanced positions in the basements and in the attics of buildings, the harvesters could create serious problems for the advancing armored vehicles and infantry. For example, in the 2 Guards Tank Army during the Berlin operation - the 22,5% of losses accounted for exactly on the faustpatrony. At the same time, in other parts of the Red Army, this figure was lower and practically did not rise above 10% of the total number of tanks lost in battle.

Objectively, an American army off-road vehicle or a heavy Dodge WC-51 SUV was perfect for placing weapons such as the DShK machine gun. This American car was mass-produced in the USA by the same-name company, starting with the 1941 year. Since 1942, it has been supplied to the USSR as part of the implementation of the Lend-Lease program. The WC series cars (from the English Weapons Carrier - “weapon carrier”) differed in manufacturability, simplicity, and a high degree of unification. In the Red Army, the car got its nickname “Dodge three-quarters” because of its non-standard load capacity by our standards - 750 kg (three quarters of a ton). 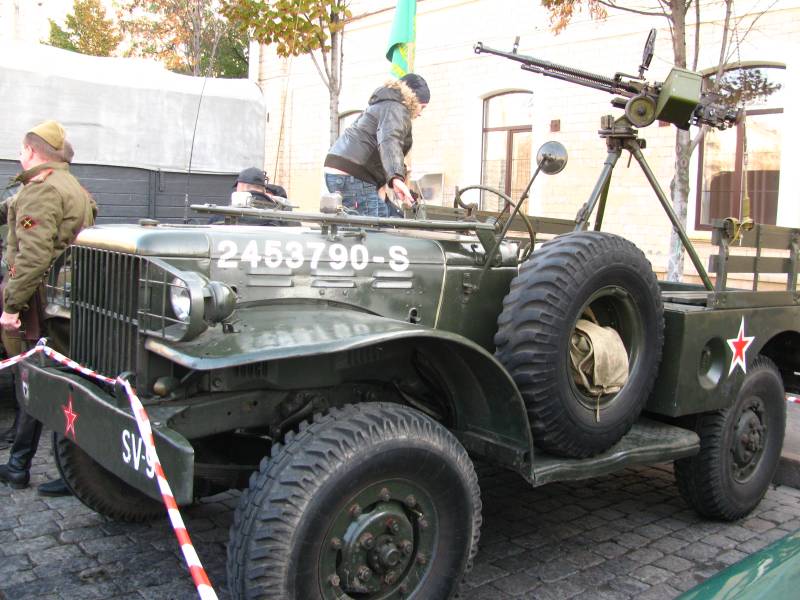 Dodge WC-51 with a DShK machine gun mounted in the back
The open double cabin, the glass of which was folded forward, provided a good view. On the left side of the cab on the swivel bracket mounted spare tire. The body of the car WC-51 was all-metal, on the sides above the wheels there were boxes that could be used to transport ammunition. On the body there were three arcs for installing an awning. At the same time, on the Soviet versions, the set of arcs could be incomplete, only the cabin of an SUV was covered with an awning. The body of the Dodge Three Quarter was originally intended for the placement of a large-caliber machine gun or a small gun. In the USA, they were even able to create an M6 ACS with its 37-mm anti-tank gun on the stand installation on its chassis, these limited machines had time to participate in the battles in North Africa.


Initially, American Dodge WC-51 cars were used in the Red Army as artillery tractors for divisional and anti-tank guns, but then they were used for a variety of military purposes. They were widely used in reconnaissance units, were engaged in escorting columns on the march, and were used as personal officer vehicles. Also in their backs were installed radio stations and machine guns. During the war years, the Soviet Union received almost 25 of thousands of similar vehicles with a wheel formula 4х4, as well as about 300 three-axle cars Dodge WC-63.

The legendary machine gun DShK stands for a large-caliber machine gun Degtyarev-Shpagin. This is an advanced machine gun, created on the basis of a DK machine gun chambered for 12,7х108 mm, it was adopted by the Red Army 26 February 1939 of the year. By the beginning of the war, the Kovrov Mechanical Plant had produced more than two thousand of these machine guns, and the 9 thousand machine guns of this type were fired until the end of the Great Patriotic War in the USSR. DShKs were actively used throughout the war as anti-aircraft and heavy machine guns. 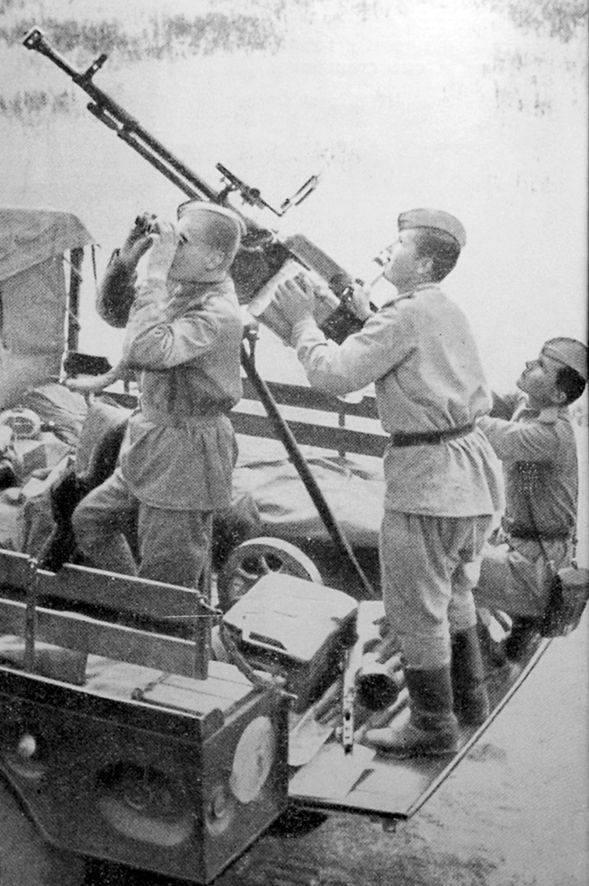 Calculation 12,7-mm heavy machine gun DShK on Dodge WC-52 ready to open fire on enemy aircraft
The large-caliber 12,7-mm machine gun DShK was designed to hit enemy planes flying at speeds up to 550-625 km / h at a distance of up to 2000-2400 meters and at an altitude of up to 2500 meters. At the same time, the machine gun proved to be excellent, and as an effective means of supporting infantry, it could be used to combat the enemy’s light armored vehicles, as well as to destroy their manpower at a distance of up to 3500 meters, including those located in various shelters. It was often installed in the bodies of Soviet trucks - ZIS-5V or GAZ-MM (the legendary lorry), as well as in the body of a cross-country vehicle Dodge WC-51.

Later in his memoir “Years in Armor”, Colonel General of Tank Forces Dragunsky David Abramovich described the option of using Dodge WC-51 vehicles with an 12,7-mm machine gun DShK as a means of supporting tanks. Here is what he wrote: “8 Dodge moved behind my tank, on which, with the barrels lifted upwards, large-caliber anti-aircraft guns were mounted. The anti-aircraft gunners held tightly to the arms of the weapon entrusted to them, they were ready at any minute to open fire on the enemy’s “foustists”, as well as on any other enemy firing points found. I have always tried to keep this company, which repeatedly rescued us in trouble. And now, during a throw over the dead valley to the gloomy forest, Doji, with heavy machine guns mounted on them, was surrounded by a commander tank with a landing force on armor. Tankers turned the towers of their cars in the direction of the houses and smashed the upper floors with high-explosive fragmentation shells, while the ubiquitous anti-aircraft gunners sent fire trails of 12,7-mm bullets to the attics and windows. ” 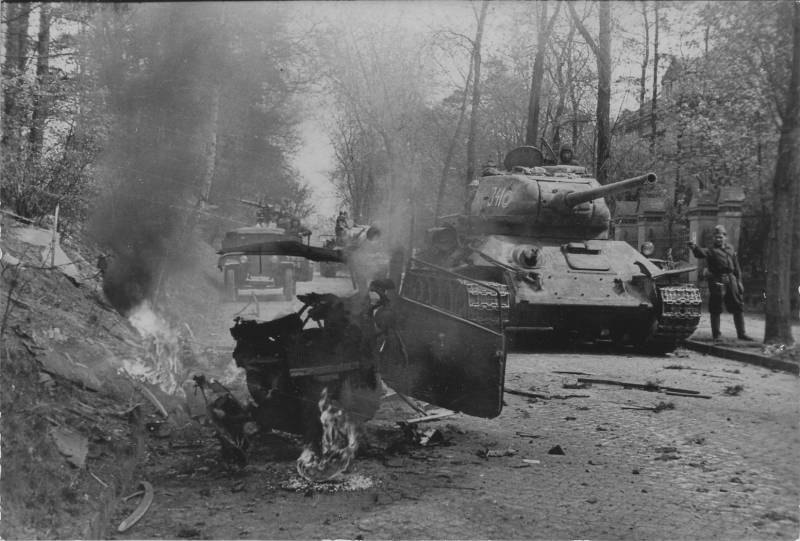 A convoy of T-34-85 tanks, including a car with a DShK machine gun in the back
After the war, this practice was safely forgotten. Most likely, the "inappropriate" use of technology was not encouraged. In any case, such a bundle was not considered at all as a ground vehicle, but more advanced and effective solutions, including new small-caliber artillery, appeared as anti-aircraft weapons. And there were simply no analogues of the Dodge Three-Quarter car in the USSR, and the resource of the cars remaining after the war was limited.

Ctrl Enter
Noticed a mistake Highlight text and press. Ctrl + Enter
We are
Is the old well forgotten to become the new? Part-2. By call of honor and dutyAn-12 in Afghanistan
36 comments
Ad