How the T-90 tank became the best in the world 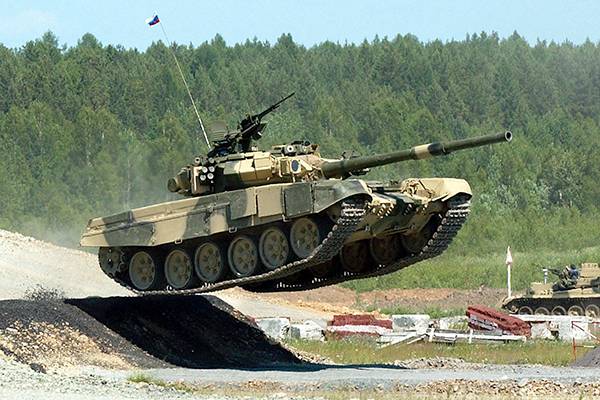 Twenty-five years ago, the T-90 tank was adopted. It turned out to be the most popular at the turn of the millennium. In fact, this a tank closed история tank design of the twentieth century and the history of the XXI century. And this is a merit of Russia.

The Indian military believed and believes that "by the effectiveness of the T-90C can be called the second after the nuclear weapons deterrence factor. "If we consider the confrontation factor of India, Pakistan and China, the statement is not without reason. Today T-90 is definitely better than all Chinese tanks and Birch T-XNUMUDUD, sold in its time by a separate Ukraine to the same independent Pakistan.

At the heart of the creation of the T-90 was India’s desire to strengthen its armored power. Negotiations on the creation of a Russian-designed tank adapted specifically for India began at the end of 1980, specific agreements were reached, and prepayment was made. The new tank was designed by a team of a special Uralvagonzavod design bureau, headed by Vladimir Potkin. In 1991, the car was almost ready. And then the USSR collapsed, and with it all the allied industrial cooperation, which ensured the uninterrupted functioning of the Soviet defense industry. The project managed to be completed only thanks to Vladimir Potkin - his design talent and organizational abilities.

It is not necessary to consider what was said above as something well-known. This is exactly what few know, alas.

In early October 1992, an exceptional event occurred. The new T-90 tank was adopted by the Russian (already) army and allowed to be sold abroad under the name of T-90С. Then our military long thought what to do with the letter "C". They came to the conclusion: to consider this letter a sign that the machine was serial and at the same time drill. Today, all military equipment with the letter "C" means serial-drill. And 25 years ago, the T-90C was an exclusively Indian tank.

Vladimir Potkin made a real feat. He saved the UVZ, proved that the national school of tank design is the best in the world, and designed a tank that turned out to be really the best in the world at that time. And India received a combat vehicle that surpassed all armored vehicles that its potential rivals had in terms of their strike power. In India, the T-90 tank is named Bhishma, which means “formidable” in Sanskrit. But by the Russian-Indian agreement, T-90C is also called "Vladimir" - in honor of Vladimir Potkin, who passed away in the 1999 year.

The T-90 is the deepest upgrade of the T-72, for some reason considered obsolete. Indeed, the French Leclerc, the German Leopard and the American Abrams are much more modern cars. They are saturated with electronics, televisions and thermal imagers, they have very large amounts of space, in which the crew is comfortable. They have a lot more.

And the T-90 crew is clamped in their seats, he sits on the shells, and no individual space. But what is the priority in combat? Armored car for a comfortable ride or a tank for combat and survival?

French AMX-56 Leclerc did not participate in the battles. Its mass production began in the 1992 year, simultaneously with the T-90. Shipped to United Arab Emirates. There he was positioned as a Rolls-Royce armored vehicle. The car is comfortable in all respects, but did not participate in the war. And according to reputable experts, they are absolutely not ready for modern combat.

The American Abrams defeated the Iraqi army’s armored vehicles, consisting of T-72. And if for the levers of those machines were not "apricots"? And let the Iraqi tankers not be offended. The Syrians have shown what even very old Soviet T-72 releases are capable of, if they are controlled by real masters.

Invulnerability shtatovskih "Abrams" was dispelled in Yemen, which included the army of Saudi Arabia. There Abrams tanks were burning like matches. It is not by chance that Riyadh has recently been paying ever closer attention to the T-90CM, the latest version of Vladimir Potkin’s tank.

And finally, the complete defeat of the "Leopards" in Syria. These tanks were generally considered invincible, like the "Royal Tigers". And then the army of Turkey entered the territory of Syria, not clearly controlled by anyone, with its newest modifications of Leopard tanks. Destruction was absolute - the towers are torn off, the hulls are torn apart.

At the same time, T-90 tanks of various modifications perfectly show their combat capabilities in Syria. And there is a moment. Indian T-90 Bhishma did not become the leaders of the tank biathlon, held in Alabino this summer. They lost to the T-72B3. But this speaks only of the individual training of Indian tank crews, and not of the quality of the T-90, which remain the best tanks in the world.

Now about the quality characteristics.

T-90 has the lowest silhouette among the main modern ones. He has a multi-layer anti-shell armor protection. Frontal multi-layered armor of the hull and turret is equivalent to more than half a meter of homogeneous armor. The overall resistance to shelling by sub-caliber shells is estimated to be equivalent to 850 mm of armor steel. That is, almost a meter. In addition to traditional armor and dynamic protection, the tank is equipped with an active protection system, which consists of the modern blind and shade electronic-optical suppression system.

The main armament of the T-90 is a smooth-bore 125-mm gun. When firing armor-piercing cumulative and sub-caliber ammunition, the maximum targeting range is 4000 m, guided missile ammunition - 5000 m, high-explosive fragmentation ammunition along the ballistic trajectory to 10 000 m. If on the Kursk Bulge the German "Tigers" hit the T-34 at a distance of 2000 meters, now the German "Leopard" will not be able to approach the T-90 even five kilometers.

The only thing T-90 loses is in the power plant. On the other hand, how to look at it. The T-90 tank, a standard for the Russian Armed Forces, has a hp 840 diesel engine installed. On all NATO tanks, engines of about 1500 HP So what? According to the criterion, the mass of the tank and its engine power Russian cars are not very much inferior to Western ones.

To sum up, the T-90C, which was created by Vladimir Potkin, completely surpassed all of its counterparts in NATO, not to mention China. And let the designers from the Middle Kingdom not take offense. As well as the British, Germans and Americans, who all profukali in tank construction of the twenty-first century.

But we have not yet fully implemented the really best in the world gas turbine T-80.