How NATO protected Sweden from the eastern barbarians from A-Landia and B-Landia ...

October 10 2017
14
On the territory of declaratively neutral militarily Sweden, the largest international maneuvers for this country have been held since the beginning of the 90-s. It is noteworthy that these maneuvers were organized jointly by the headquarters of the armed forces of the Swedish kingdom and NATO. We are talking about military maneuvers "Aurora-2017", which were held on the Swedish territory from 11 to 29 in September, and in which more than 20 thousands of Swedish and NATO soldiers took part. 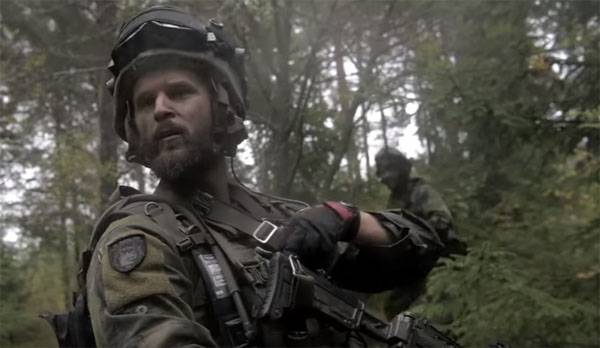 The exercises of the North Atlantic military bloc, which declared the number one enemy of the Russian Federation, were held in the southeast of the kingdom, including the islands of Gotland and Öland. According to legend, the teachings of a peaceful and "neutral" Sweden were attacked by two states at once, and, remarkably, both from the east. As aggressors, some A-Land and B-Land were designated in the exercise scenario. And, judging by the graphics used in the Swedish and Baltic media, these same “A-Landia” and “B-Landia” cartographically coincide with one country - the Russian Federation. Moreover, they coincide so precisely that the territory within the boundaries of the Kaliningrad region is indicated as the territory of the source of the “attack” on peaceful neutral Swedes. 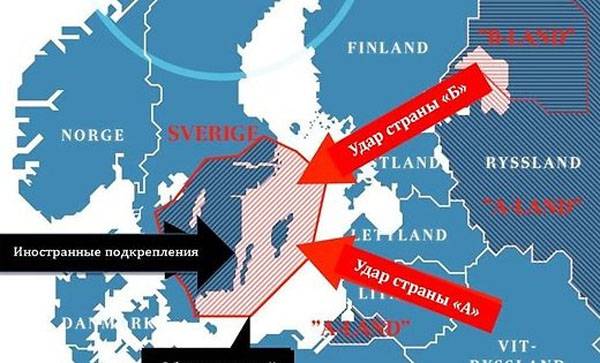 The most massive foreign contingent, as you might guess, was a contingent of US forces - about 1,3 thousands of troops. In addition to the Americans of Sweden, representatives of the armies of neighboring Norway, as well as Denmark, France and, of course, the Baltic states, helped to keep the defense from completely unraveled “A-Landtsy" and "Be-Landtsy". In addition to NATO, they also attracted “neutrals” from Finland, through whose territory “hordes from the East broke through”.

Generally speaking, the legend of NATO maneuvers in Sweden is very interesting. It looked like this: the armies of the two "hypothetical" countries decided to attack Sweden, walking on foot through the territory of the Baltic States and Finland. And if Finland was “hurt” by what’s called tangential, then, for example, they took Lithuania seriously - using funds aviation, which, as follows from operational actions, felt at home in Lithuanian airspace ... "Met" their air defense systems already at the Swedish borders.

It turns out that only by this fact does NATO make it clear to the same Lithuania that in the case of real hostilities, the republic is not initially considered as a frontier of full-fledged defense. And then how would you make Dale Grybauskaite feel all Lithuanian leader? .. But Dalia literally a few days before the start of Aurora-2017 stated that it is certainly possible to hope for the alliance, but it’s better to think about defense using your own forces and means. And the legend of the teachings about the NATO plumbing of the Baltic countries has actually confirmed the fear: for the NATO Baltic states, NATO, sorry for the jargon, they are not going to harness large forces. Another thing is Sweden, with which it is necessary a) to work out the issues of defense from the east and southeast, b) to decide with a soft and mild force the question of its possible future entry into the North Atlantic military bloc.

Why does NATO need Sweden? Sweden as such there may not be needed. But Sweden (and “neutral” Finland too) has the means - financial and military. And when you take Trump's doctrine on shaking up funds for the maintenance of NATO from members of a military organization, Sweden is considered to be a much more promising member of NATO than, for example, Georgia or Ukraine, who are far from happy with their finances as the subjects of the Swedish crown.

To demonstrate to Sweden their readiness to protect the kingdom from encroachment from the east, the Americans decided to drive several hundred pieces of military equipment into the country, including Tanks Abrams, Bradley infantry fighting vehicles, Patriot anti-aircraft missile systems, Apache, Chinook helicopters, military vehicles, etc. 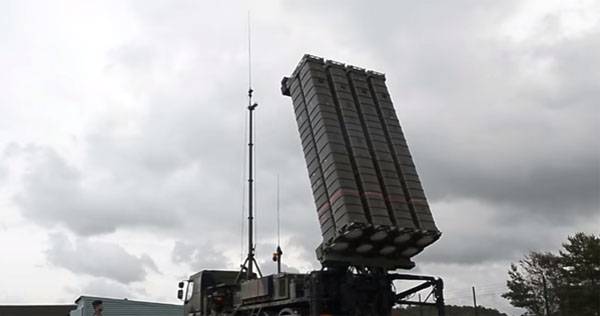 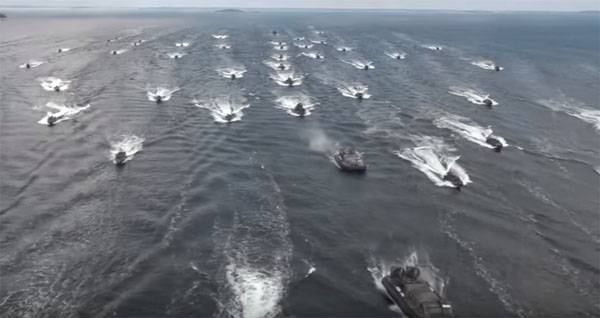 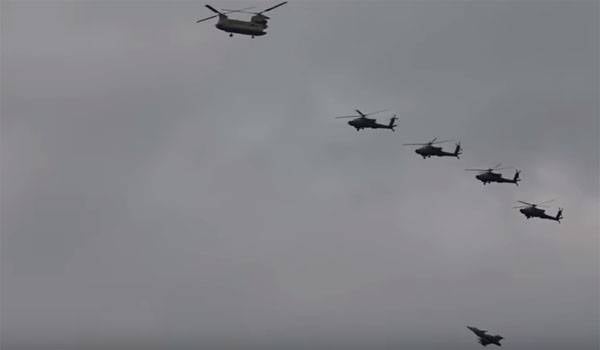 And in fact, no Grybauskaite word uttered that she would watch the maneuvers in the neighborhood - in Sweden - in order to establish whether all the equipment (the Americans) would be taken out eventually from this European state.

By the way, let's remember when the “West-2017” maneuvers started in Russia and Belarus, about which the Western media and some politicians trumpeted almost as “the beginning of the invasion”. That's right - 14 September. And the NATO maneuvers in Sweden, in which there were about a third more soldiers and military equipment, started three days before the Russian-Belarusian exercises. And at least one rag in the same Baltics announced that the United States "is ready to occupy the Swedes"? Yes, and ended the Swedish maneuvers of NATO later maneuvers of the Russian Federation and the Republic of Belarus - as many as 9 days.

I remember one of the claims to the Russian-Belarusian exercises, expressed by local pseudopacifist hamsters: Russian and Belarusian military equipment could allegedly interfere with civilian activities - up to interferences in cellular communications and before the disruption of air traffic controllers. At the same time, it was announced that in the West military maneuvers, if carried out, “never-never” do not suffer damage to the civilian sphere. Yes? “Fast forward” to Sweden a few days ago. From the message of the representative of the Swedish armed forces:

Our multi-role fighters Jas Gripen have completed the task of using civilian airports for auxiliary airfields. In addition, the landing was carried out on ordinary roads. This is done with the aim to disorient the conditional opponent. He will not know the coordinates of the places of takeoff of our fighters.

Interestingly, and motorists about such a surprise, as the landing and takeoff of the Swedish Royal Air Force fighters warned in advance? That is bad luck - and did not think to warn anyone. Several sections of roads were simply closed with the argument in the form: repair work is going on there.

Belarussian bridges will be damaged from Russian tanks, the aforementioned adherents of pseudo-pacifism shouted, and this can lead to dire consequences for the transport infrastructure. And this is a photo from NATO exercises in Sweden: 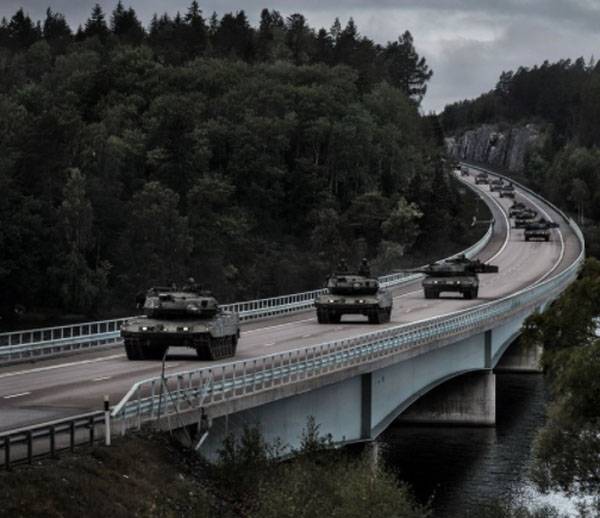 And nothing ... Everything is democratic. The fate of the bridge in Sweden did not worry anyone.


Although not quite so. Dissatisfied with the teachings "Aurora-2017" in Sweden still found. They are representatives of left-wing parties, who, it is true, were immediately announced by forces sponsored almost directly from the Kremlin. And the protest died away almost immediately after the start of NATO maneuvers. Well, you understand ... Well this is Europe. Well this is democracy. Therefore, their teachings are democratic and democratic, not like our brothers and Belarusians have.

Ctrl Enter
Noticed a mistake Highlight text and press. Ctrl + Enter
We are
Situational analysis of the death of the MH17 flight (Malaysian Boeing 777), made on the basis of engineering analysis from 15.08.2014Kuriles - an integral part of our homeland
14 comments
Ad