US experienced a new modification of "Stryker"

October 9 2017
24
Two months ago, Boeing and General Dynamics corporations presented the first prototype of the Stryker MSL combat vehicle. October 7 press office of General Dynamics Land Systems reported the successful completion of its testing and showed a video from the test.
Testing the combat capabilities of the Stryker MSL (Mobile SHORAD Launcher) took place on September 16 at the White Sands (New Mexico) military range, but it is only now that they became aware of them. During the tests, the machine hit several ground and air targets with guided missiles.

When the US Army pointed out the need to address the issue of short-range air defense, we developed the Stryker Mobile SHORAD Launcher in just seven months. MSL is just the latest example of the versatility of the Stryker platform, armed with a Boeing rocket launcher. This is the next generation firepower.
- Said the press service of General Dynamics Land Systems.

The new modification of an armored personnel carrier was created as a multi-purpose system capable of effectively fighting ground and air targets. The armament of the vehicle is the SHORAD (SHOrt Range Air Defense) shoot-off installation developed by Boeing Corporation, which was presented in the spring of this year as a replacement for the Avenger anti-aircraft missile system deployed on the HMMWV base. Stryker is the first “carrier” of the SHORAD shoot-off complex, while Boeing plans to deploy it on M2 Bradley tracked combat vehicles. 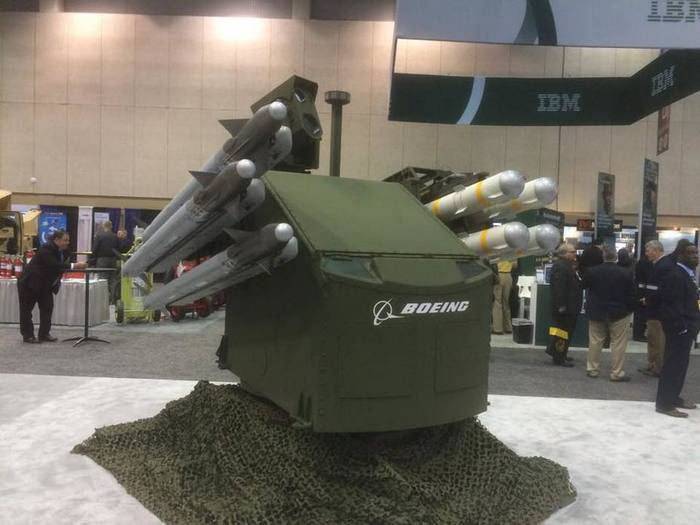 Rocket launcher SHORAD shoot-off.
Stryker MSL can be armed with AGM-114 Hellfire missiles (all versions, including Longbow), as well as advanced AI-3 and AIM-9X Sidewinder missiles. In addition, the installation SHORAD shoot-off can optionally be equipped with a combat laser to shoot down light drones without spending expensive missiles on them. According to the developers, the Stryker MSL will become a universal fighting vehicle as part of the American army and will be able to replace the Avenger, providing air protection for the units, as well as effectively hitting any ground targets, reports "Warspot"