Advertising WEB 2.0: current trends in the information and communication space (part one).

October 13 2017
27
“I tell you that for every idle word that people will say, they will give an answer on the day of judgment: for with your words you will be justified, and you will be condemned by your words.”

The publication of materials on advertising on HE showed (although it surprised some commentators) that this topic was interesting for the site’s audience. However, it is also so broad that two articles are indispensable, so we decided to continue this topic ...

The change in the modern information and communication space under the influence of the Web 2.0 paradigm demonstrates a vivid example of the influence of the transformation of technological and social space on the economy. In this article, we turn to its features from the point of view of the development of advertising communication as part of the information and communication system of the Internet and the prospects for its development. The orientation of the new paradigm to interactive interaction, engaging the audience in the process of disseminating information has provided advertising communication with significant synergies with the potential audience, which should have a noticeable effect on changing its configuration as a whole, on the main forms and channels of advertising.

The shift in the potential audience of advertising from traditional media as a source of various kinds of information into the information and communication space of the Internet, the high growth and distribution of non-professional media content (UGC) have noticeably changed the development priorities of advertising communication channels in favor of increasing advertising on the Web and the SMM segment. At the same time, the optimization of advertising business models from the point of view of preferences by means of the transmission of messages should have entailed, according to experts' forecasts, a noticeable decrease in media revenues from advertising due to the outflow of the budget of a part of the advertising business that has switched to the Internet. The reason for this situation can be considered the trend of gradually reducing the audience of traditional media, reducing the frequency of access to them and the level of trust as a source of advertising information from the potential advertising audience. The partial loss of the audience and the threat of a serious financial outflow initiated the process of diversification of traditional media in various forms and forms on the Web in order to build on the previous positions of professional media content. The latter process allows us to speak about the formation of a new media system through media convergence of the media and social networks, which in turn should make adjustments to the system of advertising communication channels. 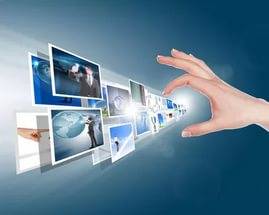 Thus, the basis for changing the configuration of the information and communication space was the growth of the Internet audience to the detriment of traditional media and a decrease in confidence in traditional advertising channels, and as a result, a promising change in the forms and models of advertising communication.

Studies in Russia, despite a number of discrepancies, demonstrate the development of similar trends in the information preferences of respondents. Leading position as a source of information, is television. However, the indicators of its popularity reached its limit during the 2009-2012 period, and at the moment this source of information is in the field of a negative downward trend, losing popularity with a part of the audience. Radio and the press find a very dynamic development curve and tangible recessive indicators as a significant source of information for the audience, which may be related to the departure of these channels into a strategy of hard segmentation of target audiences and, as a result, a decline in overall popularity. The steady pace of progressive growth in popularity as an information source is demonstrated by the Internet.

We can state a significant audience growth rate for each of the social networks, using the standard formula T = Pi1 / Pi0 * 100% (T-growth rate, Pi1- reporting period, Pi0 - basic period) as the basis for calculation. The fastest growing audience is Facebook (21,4%), Odnoklassniki (4,9%) and Vkontakte (2,1%) are lagging behind for obvious reasons. The decline in the growth rate of the audience of social networks is not predicted, as well as it is impossible to say that this indicator has reached its ceiling.

But the Internet is not only gaining popularity among the population, but also reveals a high growth rate of trust in him as a source of information, which is important for the advertising business when financing various channels. From 2008 to 2013, there has been a steady increase in confidence in information obtained from Internet sources (according to the All-Russian Public Opinion Research Center: 2008 - 49%, 2012 - 64%, 2013 - 22%). The observed pace of development allows this source of information to come first in terms of growth in indicators of the level of confidence over the past 6 years. This process is especially noticeable against the background of stabilization of trust in such channels as TV in 2008 and 2012 (71% and 78%, respectively) with a fall in 2013 to 60% and a significant regression of confidence in the print press and radio (print press: 2008 - 62%, 2012 - 70%, 2013 - 7%; radio: 2012 - 72%, 2013 - 4%). Research data allow us to record that the attitude of the population to all sources of information until 2012 showed an increase in confidence on average for traditional media by 7,5%, on the Internet - up to 15% and showed a tendency to increase. But in 2013, there was a “collapse” of trust in all sources of information based on the results of VTsIOM research, which is also characteristic of the results obtained by other research organizations. Here are the data from the FOM surveys on the level of trust in information sources for 2012: television - 55%, print media - 13%, news sites - 5%, radio - 3%, social networks - 2%. U. Levada Analytical Center (same indicator for 2013): television - 51%, print media and radio - 12%, news sites - 14%, social networks - 11%.

The configuration of trust looks somewhat different, if we turn to considering trust not as a whole to the media as a source of information, but focusing only on their perception as a carrier of advertising information. Based on global 2011 and 2012 research data from Nielsen Holdings and Synovate Comcon, one can come to definite conclusions on the development trends of information and communication advertising space: a recession of confidence in traditional advertising sources against the background of strong growth in Internet advertising and social networks.

According to the research of the largest public sociological marketing company Nielsen Holdings, conducted in 2012, two leading sources of advertising information in terms of trust are recorded: recommendations from friends and acquaintances (90%) and online - consumer reviews. In Russia, these figures are somewhat lower and constitute 86% and 55%, respectively. All other types of media demonstrate a drop in confidence in them as a source of advertising information. In 2012, the Nielsen study showed a decrease in the level of trust in advertising on television, radio, in the print press on 24%, 20% and 25%, respectively, compared to 2009 year.

The same trend of falling trust in traditional media channels on a global scale is demonstrated by research by Synovate Comcon 2011 of the year. If in 2007, 47% of the population of 7 of the surveyed countries (including Russia) trusted television as a source of information, then in the post-crisis period, the level of trust stopped at 35% and has no tendency to increase. Unlike the Internet, which was trusted by 40% of the respondents, the confirmed growth of the indicator was outlined.

Ctrl Enter
Noticed a mistake Highlight text and press. Ctrl + Enter
We are
When advertising becomes a weapon ...Results of the week. “In our cooperative, the board is always agreed”
27 comments
Information
Dear reader, to leave comments on the publication, you must to register.