Catalonia: the beginning of the "parade of sovereignties" or a fight of elites for privileges?

October 4 2017
13
Hot heads after the “bloody Sunday” in Barcelona (the German newspaper Die Zeit dubbed the events in Catalonia) talked about a new “parade of sovereignties” in the old Europe. In fact, the official Madrid, the locals of Catalonia and the confusion of the European Union did everything for that. Madrid, for its part, is the clumsy position of denying the referendum as such, and later with a tough forceful act on what they seem to deny. Catalans - their own determination. Well, the EU added fuel to the fire with its complete confusion in the choice of manuals on the issue of Catalonia: either the Kiev euphoria of “freedom” or the complete denial of rights, as in the Donbas. 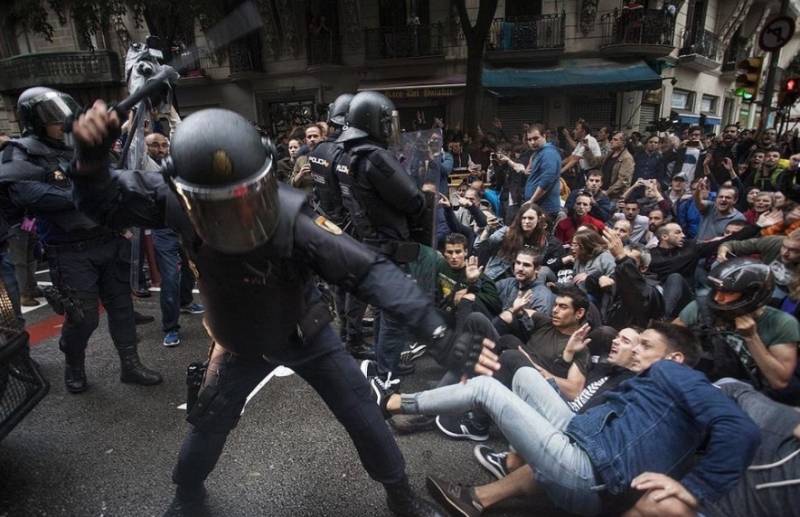 The apotheosis of helplessness and lack of independence of European officials was the lengthy, fluid and completely meaningless speech of the head of the European Commission, Jean-Claude Juncker. Repeatedly humiliated, Junker did not miss the moment to screw it up this time, giving rise to various fabrications, and to some even giving hope for the support of the EU referendum in Catalonia. But soon the staff of the European Commission, which is headed by Juncker, said that the chief was misunderstood and the referendum was illegal. Those. The European Commission, quite unexpectedly, took the same position as US President Donald Trump. The latter declared the "indivisibility of great Spain" after meeting with the Prime Minister of this very Spain, Marian Raha.

But the initiators of centrifugal processes in the supposedly "united Europe" were no longer up to the statements. About a thousand victims, flashy emotional photos and slogans with the potential to mobilize the average person - not the capital that is thrown on the go. Moreover, almost the entire European central press, starting with the French Liberation, clearly recognized the defeat of Mariano Rajoy.

Yes, of course, he enlisted the support of the European Commission and the owner from across the ocean, but strategically he had already lost. First, he lost confidence, both domestically and externally, deciding instead to drown the referendum in formalism, ignore it (after all, no one has heard of Catalan self-defense forces) or buy sweet promises, play the role of a Spanish macho, forgetting that macho is not needed in Europe. Secondly, Rahoy presented the Catalans with an annual day of mourning, which, playing the Catalan activists of the card correctly, will sooner or later grow into new clashes, if even now events subside. But, most importantly, he planted the EU with such a pig that even his colleagues will remember Catalonia for a long time. The fact is that the Catalan referendum has already broken up in waves on the "separatist" parties in Europe, and most of them are also Euro-skeptics. Those. the comrades are completely free because of the stupidity of an unlicensed version of macho Mariano received another trump card against the EU. So it is not far from the slogan “EU is a prison of nations”. Try, argue now with them, any awkward phrase and the answer is ready - “aha, tell the Catalans about it”.

So how much did the circles go to pain points in Europe? And who decided to realize the political potential of the Catalan events in their favor? I will give just a few examples.

The confrontation of the industrial North and the agricultural South of Italy is well known. Moreover, this “cold” (for the time being) conflict has taken not only economic roots, but also deep social and everyday ones. So, for example, northerners call terrone southerners, something like "redneck". Naturally, southerners are not far behind them. This situation is reflected in the culture. Starting with the absurd comedy “Welcome to the South” by Luca Miniero and ending with the book by Pinot April, which is called “Terrone”, the author analyzes the differences between northerners and southerners in many aspects of life.

But, naturally, the main claim of the North to the South is finance. And as with modern farming technologies, as some experts note, the value factor of favorable climatic conditions (as in southern Italy) is significantly devalued, the North automatically turns into a donor region. This, in turn, is related to Catalonia, more successful than many other areas of Spain. 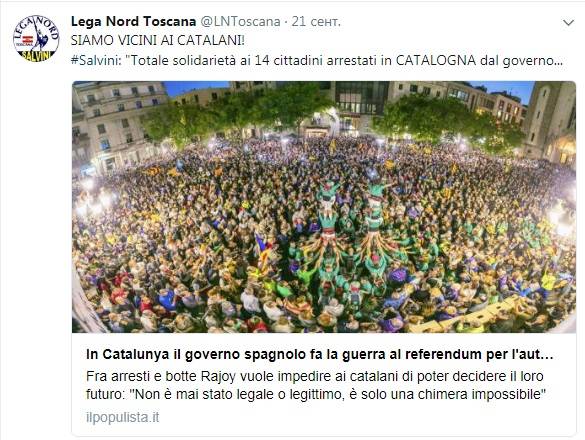 It did not forget to mention on official twitter the Italian party “League of the North for the Independence of Padania” (or simply “League of the North”). "We are close to the Catalans!" - This statement was made by the Tuscan branch of the party of the League of the North in Italy. Deja vu is some kind of, it’s good that not all of us are Georgians. But if the method works, why change it.

The League of the North, which stands for the independence of Padania (the territory of Italy north of the cities of Terni, Grosseto and Ascoli Piceno), professes nationalism, conservatism and, like many parties of this kind, Euroskepticism. For them, the events in Catalonia are another argument in achieving the goal, while the argument is provided by the capital of the broken heads. 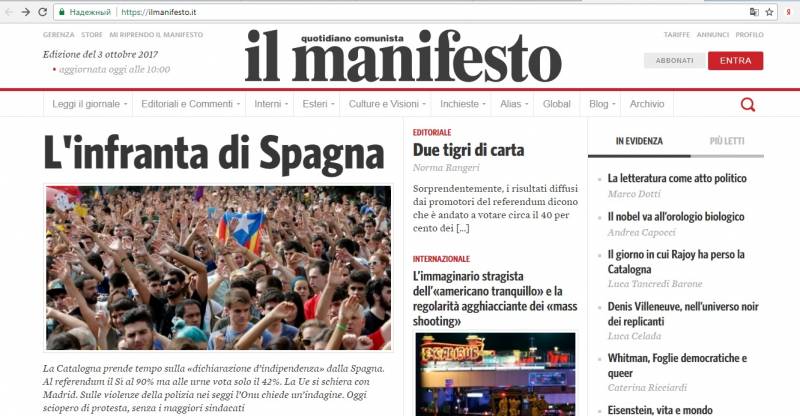 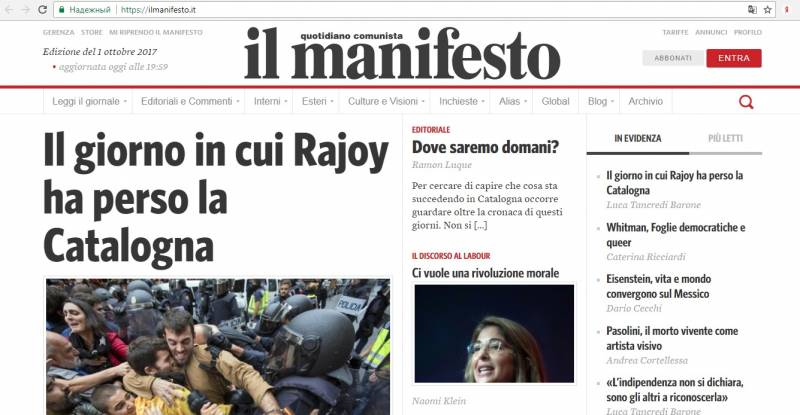 But do not think that a hefty cobblestone in the garden of Spain and the EU was thrown only by “right-wing” independent parties. Strangely enough, the communist Il Manifesto, previously quite restrained in relation to the “united Europe”, up to the ideology of “Euro-communism”, has been coming out for a few days with lax headlines, such as “the destruction of Spain” or “how Raha lost Catalonia”. Increase circulation or just hold your nose to the wind? How to know.

Chocolate and beer Belgium is not so idyllic

Little Belgium is quite a young state, which gained independence in 1830 year, and is woven from the lands of the Flemish (Germanic language group close to the Netherlands) and Walloons (speaking French and Walloon languages, culturally close to France). Despite the fact that the Flemish always had more than the Walloons, it was the Walloons who determined the direction of the country's development and its official language, i.e. French. Only in the 1960-ies began the equalization of the rights of the French language Walloons and Dutch Flemish in the rights.

Moreover, at the moment, Flanders is much more successful than its neighbor Wallonia in economic development. And, therefore, becomes a donor region. At the same time, the donor of the minority, which for the most part of the country's existence per se, oppressed their language and independently decided the future of Belgium. Thus, there could not be a situation in which the Flemish do not cry, finally: “Stop feeding the francophone!”

One of the locomotives of such sentiments in Belgium is the right-wing party "Flemish Interest" adhering to the beliefs of Flemish nationalism and, of course, Euroscepticism. The party has repeatedly been accused of separatism, extremism and relations with the “National Front” in France (when the latter was considered marginal) and the “Republicans” in Germany. 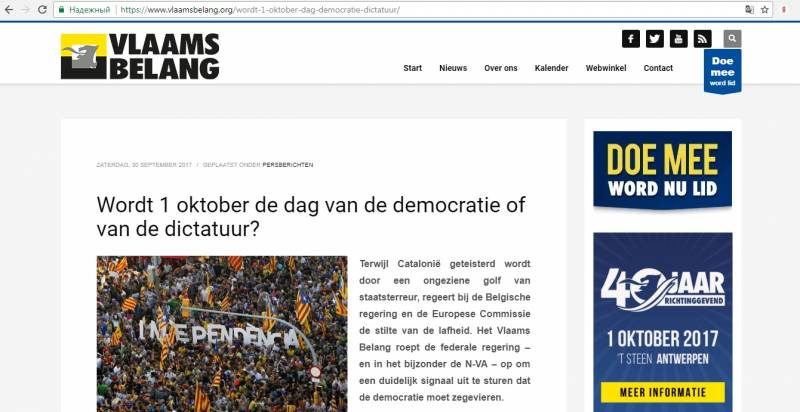 "Flemish interest" simply could not miss the "Catalan gift." On the official website of the party, it’s not the first day that the press release hangs, which contains almost all the complaints, both to the Belgian authorities and to the EU as a whole. And for the word in their pocket, they do not climb. One of the materials is titled: “October 1 will be the day of democracy or dictatorship?”

In addition, these materials "Flemish interest" began to publish long before the referendum and the events that followed. There was still no blood and odious photos that have flown around Europe. Fisherman fisherman, as they say.

Scotland - a country of contrasts

18 September 2014 held a Scottish independence referendum. But, unlike the Catalans, promises of paradise went down on the population of Scotland as a cornucopia (extending the rights of Scottish parliament, expanding the list of taxes, the right to collect which was delegated directly to Edinburgh, etc.) in case of non-independence. If the population of Scotland chooses independence, then they were promised the most negative economic consequences and, oh, horror, the broken heart of old woman Elizabeth II. 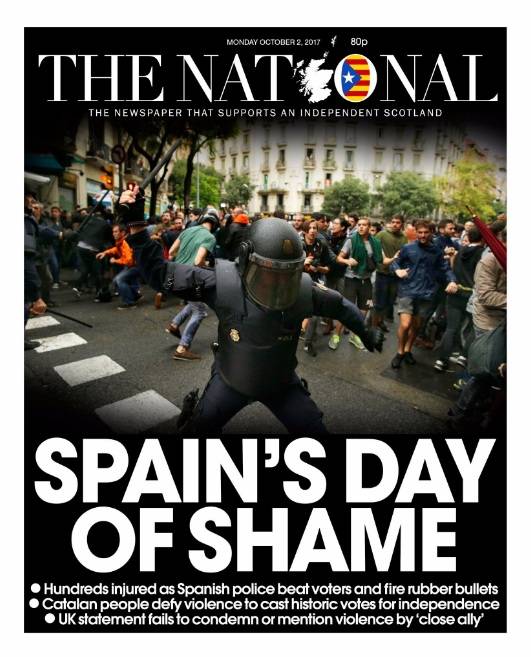 Despite persistent rumors of fraud in the independence referendum, the fact remains, Scotland voted for unity with the UK. However, one should not think that the parties that have linked their political future with a positive solution to the issue of the independence of Scotland have denied this idea - the stake has already been made. Moreover, they did not even stop the work on the renewal of the referendum. As a result, the Scottish Parliament even set a period for it - the autumn of 2018 — the spring of 2019. 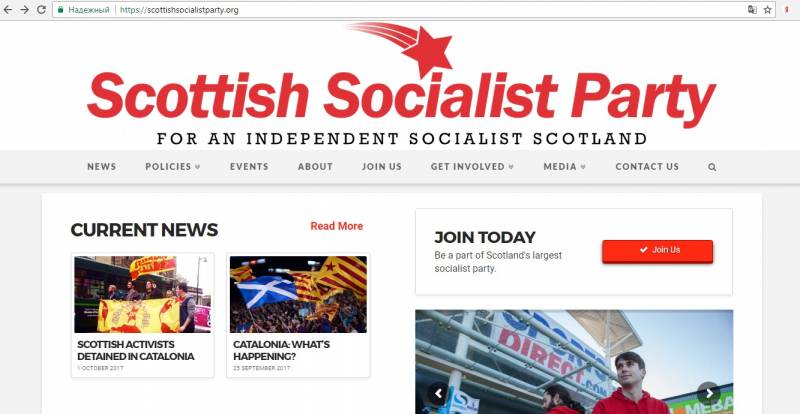 The Scottish Socialist Party, working on independence together with the Green Party and the Scottish National Party, did not just bristle with a series of critical publications, several of its activists went to Catalonia as a support group, where they were successfully detained by local law enforcement. 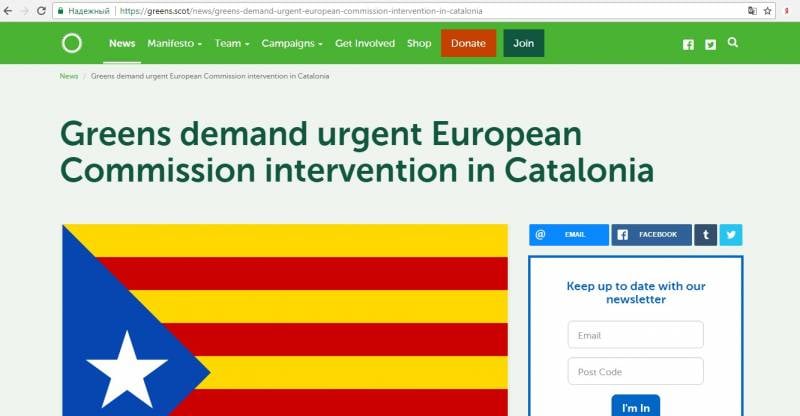 The Scottish “greens” also attacked the Catalan theme no less critically, demanding from the mouth of their EU representative Ross Greer an immediate intervention as an intermediary between Madrid and Barcelona. In general, every member in Scotland decided to take a ride on this topic.

And it was gently gentlemen who approached the question, because, unlike the "separatists" of continental Europe, they are in favor of European integration.

Ireland is the eternal bogey of Great Britain

The problem of Ireland is not only a talk of the town, but already rather romanticized история. The gloomily brutal IRA fighter in the form of Brad Pitt from “The Devil's Property” and the heart-rending screaming Dolores O'Riordan from The Cranberries group did a lot of work in this field. But consumer goods are consumer goods, and the Irish national party Sinn Fein was not even going to give up. And even more so they were not going to throw such a tasty informational occasion on the road in order to kick their opponents from the bottom of their hearts. 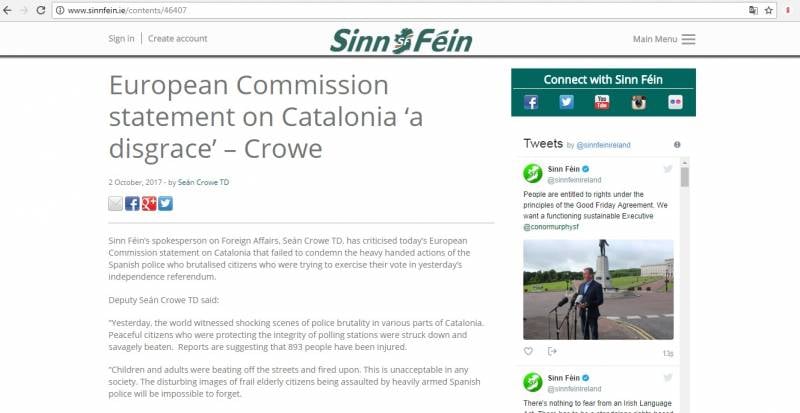 At first, Sinn Fein declared that the EU was simply obliged to support Catalonia, and when the European Commission did not recognize the referendum, the Irish called it a shame. Also, the Irish did not forget to mention that no one elects the European bureaucrats, and therefore it is impossible to talk about democracy within the EU.

This sharp criticism is understandable, because, unlike the neighboring Scots islanders, Sinn Fein is in the position of Euroscepticism.

And note, these are only the voices of those who are already integrated into power at different levels and completely legitimized. And what interesting marginal processes will take place against the background of the Catalan pogrom among students, or, say, among workers spending their taxes on extinguishing a migratory fire in Europe? How to know.

Of course, to observe the "parade of sovereignties" in the near future, in a short time across Europe (from the Basque Country to the Bavarian nationalists and God knows who else) is unlikely to happen. But the fact that this reason to knock even greater privileges from opponents by certain political forces will not be forgotten is a fact. 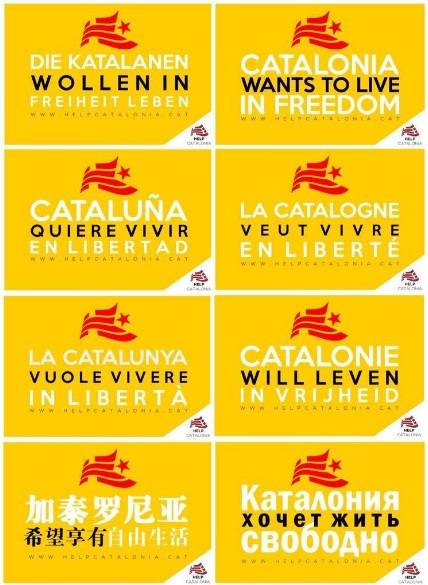 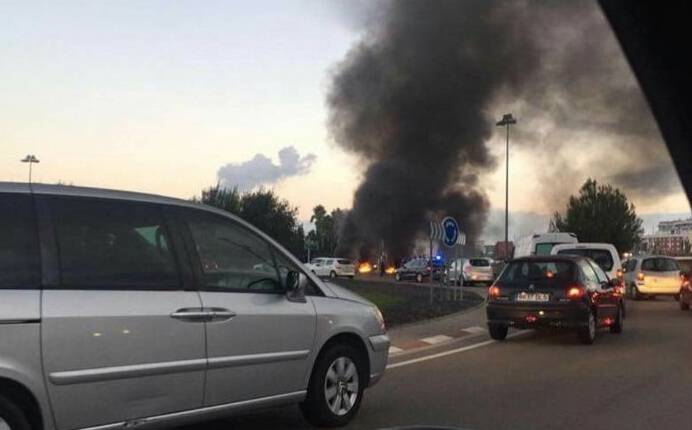 And do not forget about the Catalans themselves. Even such a modest resource as their official twitter (@CataloniaHelp2) is currently operating as a nuclear reactor, giving hundreds of tweets per day to the mountain (from photo to video from all over Catalonia). And they still throw firewood in the furnace, they, of course, would have burned brighter if not for the shooting in Las Vegas. But now everything depends on the professionalism of the Catalans themselves in this matter. For example, tires in Barcelona are already burning, and the police units that have arrived are blocked in hotels.

Ctrl Enter
Noticed oshЫbku Highlight text and press. Ctrl + Enter
We are
Spain / Catalonia: diverging, the show "Square" will notWho and why 40 years ago began to prepare Catalonia for independence
Military Reviewin Yandex News
Military Reviewin Google News
13 comments
Information
Dear reader, to leave comments on the publication, you must sign in.