October 3 2017
39
According to the portal navaltoday.comThe US Navy has signed a contract with General Dynamics Bath Iron Works for the construction of two more destroyers on the renewed Arleigh Burke project, which have been under construction for three decades and still remain one of the most high-tech warships in the world.


In 2013, the US Navy command approved the updated Arleigh Burke project, called Flight III. The new modification of the destroyer has replaced the numerous variants of the Flight IIA project, in which ships are being built from 1998 onwards. 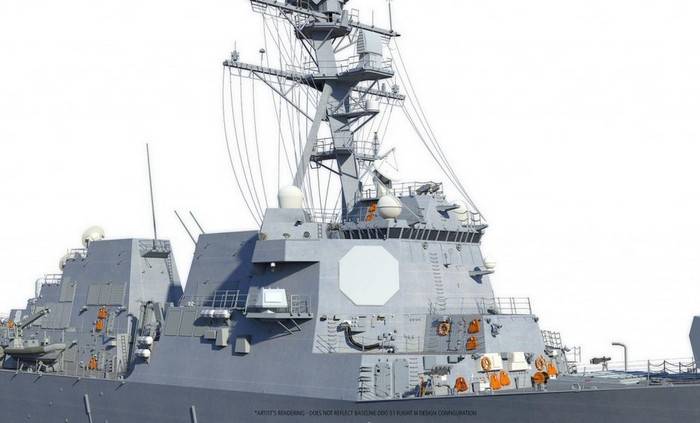 Superstructure Destroyer Arleigh Burke modification Flight III
Under the contract, Bath Iron Works shipyard will complete the previously ordered destroyer DDG 126 Louis H. Wilson Jr. with changes in the project Flight III. In addition, the US Navy ordered the construction of another ship with the number DDG 127, has not yet received the official name.
The main innovation of the Flight III project was the installation of the Advanced Missile Defense Radar (AMDR) AN / SPY-6 (v) radar system, which will replace the SPY-1 radar. In addition, new destroyers will receive a modified superstructure, as well as enhanced power plant and some changes in the hull design, increasing the survivability of the ship. In addition, the Flight III destroyers of the Flight III project will be staffed with a larger number of personnel.

Ships such as Arleigh Burke are the only destroyers of the US Navy (not counting the experimental type Zumwalt). Their displacement is over 9000 t, length - more than 150 m, width - 20 m. Ships of this class are equipped with artillery and rocket launchers, anti-aircraft artillery, and also mine and torpedo armament. In addition, each of the destroyers can carry one or two helicopters (depending on the generation to which a ship belongs). Today, the US Navy is armed with 66 ships of this type, reports "Warspot".