March 26 2012
20
The twentieth century was one of the worst in stories our civilization. Wars and armed conflicts between the sovereigns flared up in a continuous series, and the soldiers' blood flowed in an endless stream. The tragedies in the international arena include events in Grenada in 1983.


Grenada is a small land area in the Caribbean that gained independence only in 1974 year. Previously, the island was considered an English colony and could not independently determine foreign policy. However, in obtaining freedom, revolutions, uprisings, coups, and other social cataclysms immediately began to torment the country. Freedom from the three hundred year yoke was long-awaited, but, alas, not happy. The government of the young state faced a sharp property stratification, falling living standards, intrigues, fruitless confrontation of numerous politicians. Matthew Gary, a lawyer elected to the post of head of state, has turned from a promising actor into a hated but powerful tyrant who solved the growing problems of the death squads. In fact, Grenada was engulfed by civil war, as there were constant killings, including mass killings, on the island’s territory. Many civilians died in this difficult period, which ended in March 1979. As a result of the coup won by the party of Maurice Bishop, adhering to the ideas of socialism and Marxism. 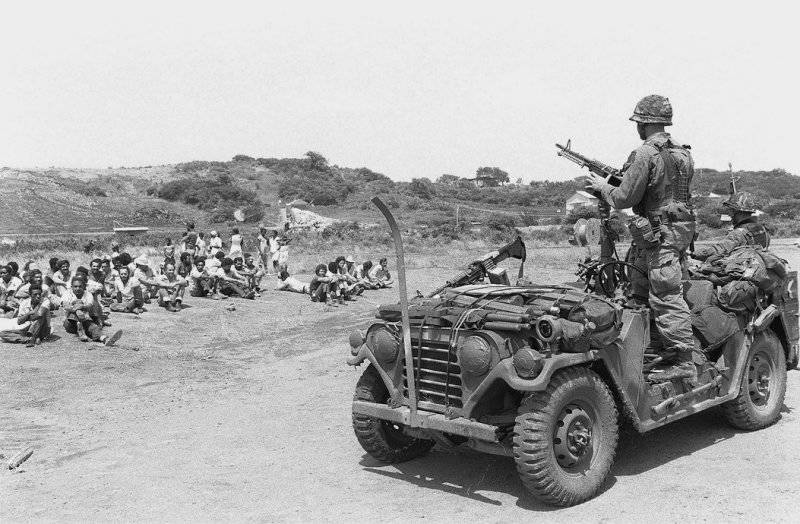 The M151 jeep guards Captive Cubans during the landing of American troops on the island of Grenada in October 1983, as part of Operation Urgent Fury ("Outbreak of Rage")

13 March 1979 was the beginning of the socialist period in the history of Grenada. The rapprochement with the countries of the socialist camp became a very rash act on the part of the government, since the consequences for the young and still weak militarily state turned out to be very sad. Relations with the USSR, Cuba, and DPRK were immediately established with Grenada, and in some matters the partners pursued exclusively geopolitical interests, neglecting the security of the population. The fact is that a small free island, located in close proximity to the borders of the United States, so it can be used as a successful military position. Such plans, apparently, pursued the USSR and Cuba in 1980x. Fidel Castro was particularly insistent, while the Soviet leadership only organized financial and military assistance to Grenada.

The choice of the political direction of Grenada is explained by far from the Marxist views of the prime minister. The background to the beginning of cooperation with the socialist states is much simpler and more prosaic. As soon as the revolutionary government announced its victory to the world, it immediately turned to the Americans for financial help, but they were able to allocate only five thousand dollars to the island for democratic reforms. Bishop was forced to turn to another world power, or to lose only the acquired power. The Soviets willingly provided large loans to Grenada, and even sent about two thousand graduates for the reconstruction of infrastructure, as well as the construction of a new airport. Bishop’s fatal mistake was not so much cooperation with the USSR as providing Cubans with their territory as a strategic military site. Aggressive Castro provoked the American government in the face of Reagan, frankly directing the military to the island. 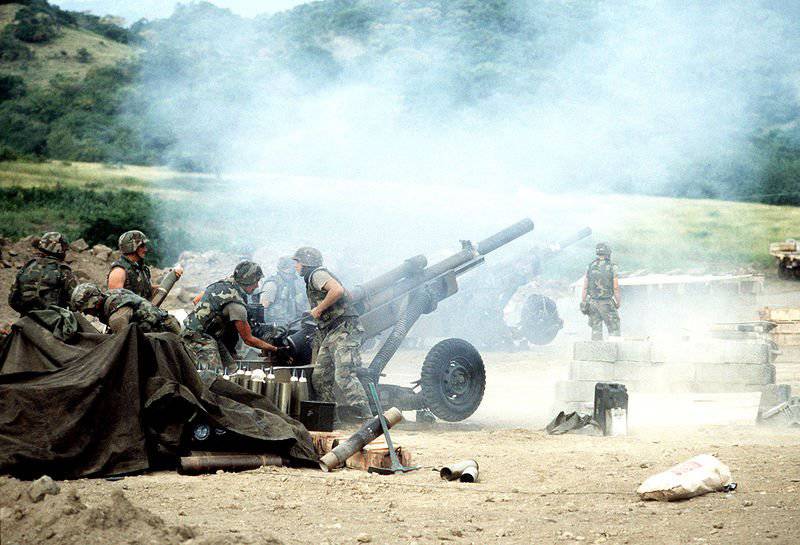 The generosity of the Union, of course, also had its goals. The location of the island is advantageous in terms of the location of air and even sea bases. The strategic adversary of the Soviet state of the United States becomes very vulnerable when it is located at a given point of a military base. Had in the territory of Grenada their species and Cuba. Despite the fact that even today, official sources deny the presence of Cuban military contingent on the island, this fact is obvious. In the country at the time of the implementation of the operation called "Outbreak of Rage" there were about seven hundred well-organized armed Cubans.

The US government was watching the developments on the island and the actions of the new leadership with tension. The countries of the Caribbean have for a long time been the sphere of influence of the Americans and are considered the backyard of a powerful country. Naturally, the prospect of a Soviet or Cuban base in this region has become the main irritant and cause of the intervention.

Acting at the time, President Reagan has repeatedly stated that the construction of a military air base is under way in Grenada, but Bishop obstinately pointed out only the civilian purpose of the airport. The construction of the controversial object involved Soviet and local Cuban specialists. It should be noted that the US claims were not groundless, since the airport, even in the version in which it was built, could still be used for military purposes. Bishop’s assurances that Grenada did not intend to exploit the disputed facility for military purposes, with three agreements on military assistance with the USSR, looked more than unconvincing. The indecision of the prime minister caused indignation of the Cuban authorities. There is an opinion that it was Cuba who was involved in the arrest and subsequent murder of Bishop. In fact, the role of this country in dislodging the objectionable prime minister has not been finally clarified. Some believe that the attack was organized by the CIA, but evidence is also not given.

According to the official version, the decision to allow private property in the state for the sake of a strong neighbor seemed criminal to the Minister of Finance and a friend of Prime Minister Coard, therefore Bishop was placed under house arrest. Supporters of the prisoner came to the house and released him, but in the process several people were killed. It is believed that in the shootout Bishop was shot, but there are other information about his death. So, the Grenadians believe that the disgraced Prime Minister was killed after he voluntarily surrendered to stop the deaths of people.

The Americans took advantage of the disturbances; the formal reason for the operation was the arrest of six hundred students - US citizens who, in the opinion of the American government, were in danger. In fact, a curfew was declared in the country, the violators of which were shot on the spot. Preparations for the invasion of Grenada began in the 1981 year, even rehearsals and exercises were held, but by the time the "Outbreak of Rage" began, American forces were still not prepared. The task forces lacked maps of the area, there was not enough transport to transfer the landing force, there was no reliable information about the air defense of Grenada.

The operation was planned to be prepared at night on October 23, and the landing should begin on the 25th of the same month. The first group of “seals” to land on the plan according to the plan was their task. aviation for landing on the island of paratroopers, then the group had to occupy a radio station. The Delta squads were assigned to occupy the prison and determine the exact location of the air defense, another group had to conduct reconnaissance to land the rangers. It was assumed that the rangers would occupy Point Salinas Airport and attack the camp of the local police and the people's army, where the arrested students were held. Landing and, if necessary, bombing were to provide four aircraft AC-130. 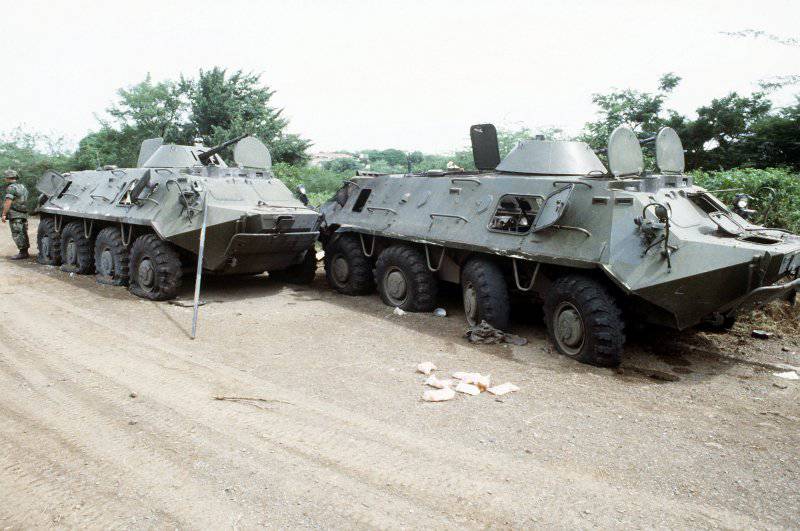 However, at the first stage, Americans suffered human losses. Four swimmers went missing, the search for which the "seals" stopped, fearing for the success of the operation. This was followed by a failure of the motors of the boats, as a result of the group was on board the aircraft carrier "Karon". Most of the equipment sank, as a result of accurate targeting could not be achieved. To keep the radio station "seals" could not, as the Grenadians had a fierce resistance. Significant assistance in the defense of the island they had a well-armed Cubans. Retreating, the “seals” smashed the equipment so that the station could not function.

Intelligence activities on the ground for the landing of troops also failed, as a result, paratroopers landed at dawn. In addition, after eighteen СХNUMX-s took off, it turned out that navigation was faulty on the lead. The landing was made with excess load, in most cases without spare parachutes. The soldiers tried to take more weapons and ammunition, therefore sacrificed security. After a short, but fierce fighting, the island was occupied. The US said that only 30 people died during the operation, but experts estimate real losses in 300 and even in 3000 people. The invasion, despite long preliminary preparations, turned out to be unorganized, each group could not fully complete the task. The defenders of the island have lost significantly more soldiers, but such statistics are not consistent with the laws of military clashes. The defenders always lose fewer soldiers than the attackers, although perhaps the element of surprise played a part. During the operation, the Americans lost several helicopters, but, nevertheless, the “flash of rage” was a success. By October 27 Grenada was fully occupied by US troops. 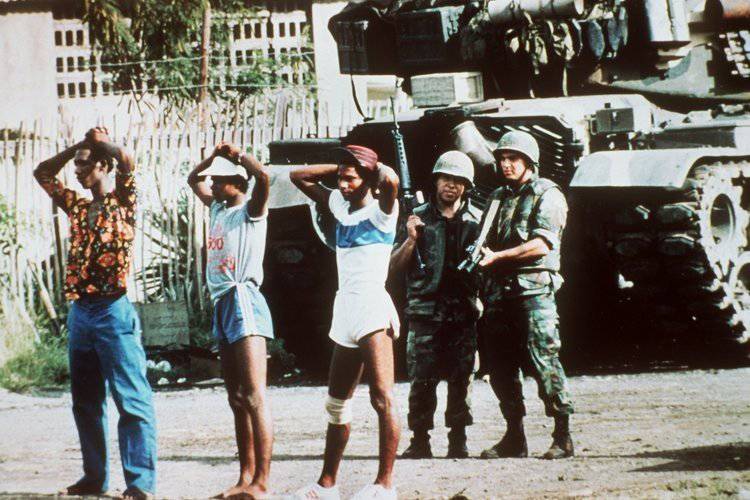 Despite close cooperation, neither the USSR, nor Cuba, did not rush to render military assistance to their socialist partner. The Soviet government spent huge amounts of money on waging war in Afghanistan, so the interests in remote Grenada were considered secondary. The world community condemned the actions of the United States, but no sanctions followed, as did the reaction of the aggressors themselves to this opinion.

In December, 1983, the troops were withdrawn, but the policy of Grenada is now carried out pro-American. Supporters of the socialist camp, including Finance Minister Bernard Coard, were convicted. Coard hanging was replaced by life imprisonment, only in September 2009, the case was revised, and the prisoner was released. Soon after the withdrawal of troops in the United States, all economic sanctions were lifted and close relationships were established.

Ctrl Enter
Noticed a mistake Highlight text and press. Ctrl + Enter
We are
Anton Denikin - the fate of the officer on the altar of historySecret contingent in the Arab-Israeli war
20 comments
Ad