Beijing began to drift towards America

October 2 2017
135
Last Tuesday, a meeting of more than 200 politicians, businessmen and scientists from the United States and China was held at Columbia University in New York. They called their event very pretentiously: "The think tank forum is a relationship for the next fifty years." Look not so far forward called not whim experts. In New York, they began to form an official course towards a union of two states, called upon to determine the future world order. This is supported by the fact that the Chinese delegation was headed by Vice Premier of the State Council of China, a member of the Politburo of the CPC Central Committee Liu Yandong. On the American side, political partner, former US Secretary of State Henry Kissinger, became her partner. 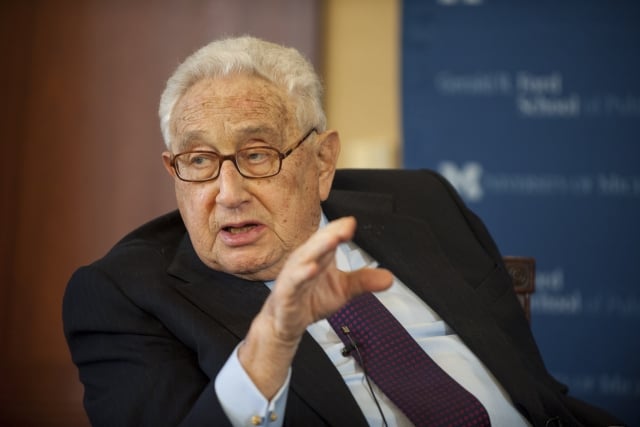 "Chinese dream" has found its vector

In his opening speech, Kissinger outlined the purpose of the forum: “It is imperative for the United States and China to work together to raise the level of our relations from pragmatism and solving everyday problems ... Our task is to find a way to combine American exclusivity and the“ Chinese dream ”, which will create a new world order for the good of all. "

It seems that such an approach to joint economic and, possibly, political interaction did not become a revelation for the Chinese delegation. In this regard, I recall the April meeting of PRC President Xi Jinping with US President Donald Trump in the Mar-a-Lago resort estate. Then, during dinner, the manor of the manor perplexed the Chinese guest with a rocket attack on Syria.

Commentators found Trump's gesture a political rudeness, but Syh endured and brought the negotiations to the end. Moreover, after their graduation, the Chinese leader flew to Alaska, where he discussed joint oil and gas projects with the local governor. Already then it became clear that in “Mar-a-Lago” Sy didn’t come to get acquainted with the American partner.

The chairman of the PRC was driven by long-term national interests. This was evident from how seriously the Chinese were preparing to meet with Trump. For example, since the beginning of the year, they have resumed in large volumes the purchase of US government debt obligations, replenishing their credit portfolio of American trading companies that has considerably thinned before.

In the past, when it became clear that the Barack Obama administration was squeezing China out of regional trading communities, Beijing arranged a sale of US treasury bills. Today he is buying again (the eighth month in a row), having returned to himself the status of the main foreign creditor of the USA.

This dynamic has not changed for the entire period since the April meeting at the resort estate. Trump during this time managed to scold the Chinese, scare them trade war. Chairman C, as if nothing had happened, continued to finance the American economy by buying low-income traders.

Occupation is rather doubtful. Judge for yourself. In August, the US Treasury Department published a regular report on the movement of US debt government bonds. According to the ministry, the volume of tradegrices held by China is 1,146 trillion dollars. This move of Beijing was not understood by everyone, even in China itself. "Perhaps they think that the dollar is now attractive and increased investment (in US government bonds)," said Kevin Lai, an analyst at Daiwa Capital Markets in Hong Kong.

There are grounds for his confusion. As is known, annual Chinese exports to the United States are estimated at 480 billion. It turns out that Beijing has been sending its goods to America for more than two years and leaving its revenue overseas, buying US bonds. Xi Jinping continued this policy today. The chairman of the People's Republic of China demonstrates to the Americans and the world that he is set to cooperate with the United States, regarding it as a long-term project of the “Chinese dream”.

Some trades dealt not over. Beijing has opened its market for American beef. Sharply (almost ten times) increased oil exports from the United States. It is said that taking six weeks from Texas is more profitable than taking three weeks from Saudi Arabia. And without any talk, it is obvious that the new steps of China will make it possible to somewhat reduce the trade imbalance between countries that has grown to indecency ($ 320 billion in favor of Beijing).

In addition to economic, there are also sign political overtures on the part of the Chinese. This was noted by Henry Kissinger, a forum at Columbia University, who noted the cooperation of the two countries in matters of global policy, which "is already evident in our joint actions on the Korean issue."

What it was: a statement of fact or praise to the compliant Chinese - everyone is free to decide for himself. Let's see the situation in practice. As long as the US administration is hot in belligerent rhetoric about North Korea, China is really acting. In September, he completely froze deliveries of liquefied natural gas to the DPRK.

21 of September, the People’s Bank of China issued an order to the national banks - “to stop providing financial services to new North Korean customers in accordance with UN sanctions and to wind up lines of credit with current customers from the DPRK”. Since October 1, Beijing has imposed restrictions on supplies of oil and petroleum products to Pyongyang.

The next step should be the already promised ban on the import of textile products from the DPRK, bringing the Koreans about $ 700 million in revenue. Beijing, in fact, threw a close geographically and ideologically close partner. Turned away from him in favor of the prospects of cooperation with the Americans.

Donald Trump crumbled in the courtesies of Xi Jinping. “It was a somewhat unexpected step, and we appreciate it,” the American president rejoiced, but did not promise anything in return. For example, remove the worrying Beijing American missile defense system from the Korean Peninsula.

The transformation of the “Chinese dream” into the “big two” has not been ignored even by those Americans who constitute the anti-Chinese segment of the ruling (primarily military) elite of the United States. Representing her interests, former Assistant to the President of the United States Stephen Bannon, according to the South China Morning Post, recently held a closed meeting in Beijing with the head of the Central Commission for Discipline Inspection of the CPC, a member of the Politburo of the CPC Central Committee, Wang Qishan.

Details of the meeting, which lasted an hour and a half, were not disclosed. However, the experts came to the conclusion that the Big Two was discussed. First, Bannon came to Beijing from an investment forum in Hong Kong. So, he was ready to speak on economic topics. Secondly, Wang Qishan belongs to the category of those party leaders who are directly involved in the preparation of the XIX Congress of the Communist Party of China, scheduled for 18 in October.

This intra-Chinese event is of interest to foreign analysts, primarily because the chairman of the PRC Xi Jinping must be re-elected at the congress as Secretary General of the Central Committee of the Chinese Communist Party of China. No less interesting are the new CPC policy documents on economics and politics.

It is expected that at the congress in the Chinese plans the “big two” will acquire real features. For the first time talked about it in 2009 year. The proposal to create a “group of two” (G2) was an American initiative. The Chinese treated her coolly. They felt that the United States was not ready to consider China as an equal partner, and declared their commitment to the concept of a multipolar world.

Now the situation is different. China over the years has become the main trading partner of more than one hundred countries of the world. The economy of China at purchasing power parity for several years confidently ahead of the US. Moreover, China is seriously lending to America. In addition, since last autumn, the Chinese yuan has become one of the world's reserve currencies.

It began to be used in international payments, including for the supply of hydrocarbons. Now, one can certainly wrestle for equal cooperation with America, albeit with ethical costs from the betrayal of many years of partners. Some can be left without gas and oil, others in the same congress documents can be modestly named “strategic partners”. Everything will be accepted and even justified by local propagandists.

China opened in its desire to "steer the world on an equal footing with America." Probably, they will succeed. Except for the few self-sufficient countries, including Russia. She is remembered. The US Treasury Department already announced 28 in November as the date for the introduction of new sanctions against Russian banks and oil and gas companies. This will happen after the scheduled for November visit of US President Donald Trump to Beijing ...

Ctrl Enter
Noticed oshЫbku Highlight text and press. Ctrl + Enter
We are
The head of the DPR visited Gorlovka, the cadets took the oath, and in the "Olympic" hosted the forum "Donetsk Republic"Strangulation: the context, conduct and consequences of the American naval blockade of China
135 comments
Information
Dear reader, to leave comments on the publication, you must to register.