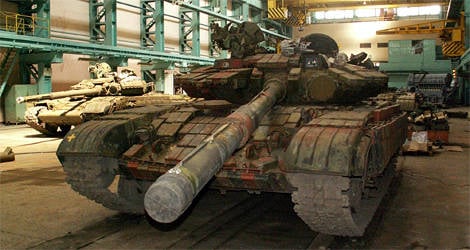 Russian weapon and military technology is perhaps the only domestic high-tech product in demand abroad. The trends of recent years are such that, despite the increasing demand for this type of product, its offer is slowly but surely falling.

The fact that the capacity of the enterprises of the military-industrial complex is not enough to meet the needs of all potential buyers, said on the eve of Russian Prime Minister Vladimir Putin. According to the head of government, the Russian military is most in demand abroad. aviation, air defense systems and products of military shipbuilding. Our country has the ability to produce weapons in demand on foreign markets thanks to the backlog created in the Soviet period, the prime minister admitted. At the same time, despite the increasing demand, Russia cannot increase supply due to the lack of resources, both material and human.

According to the Stockholm World Research Institute (SIPRI), from 2005 to the present, Russia ranks second in the world in terms of the volume of armament exported - our country's share is 23%, and is second only to the US - 30%. From 2001 to 2005, our country was the leader in the supply of arms abroad - 31% against all the same 30% from the United States.

Russia can no longer fully meet its own weapons needs

According to the head of Rosoboronexport, Anatoly Isaikin, for 2009 a year, Russia supplied 7,4 billion dollars worth of weapons abroad, which is 10% more than in the previous year. He claims that our country continues to increase arms exports - over the past nine years, it has increased more than 2,4 times, but the fact that Russia's overall market share has declined indicates that we are not keeping pace with its growth. Another fact is alarming. According to military experts, despite the fact that Russia supplies weapons to more than 50 countries, the main buyers are China and India, which account for about 80% of exports. However, the level of the economies of these countries and their defense industry allows them to increasingly provide themselves with their own weapons (this is especially characteristic of China), developed according to Russian models. According to Isaikin, China has been one of the largest buyers for the last decade and a half, acquiring up to half of all our military exports. However, last year, China’s share fell to 18%. The thing is that China, as well as India, is increasingly interested not in the weapons themselves, but in technology, issues of licensed production, joint research and development with Russia, and interaction in high-tech areas.

Russia, interacting with India and China in this vein, gives these countries, figuratively speaking, not a fish, but a fishing rod, which leads to a decrease in the amounts and volumes of contracts for the supply of ready-made military equipment. Perhaps the most striking example of recent times is the beginning of practical tests of a joint Russian-Indian development - the fifth-generation fighter PAK-FA. The technology and intellectual property on this ultra-modern fighter, which Russia could sell abroad (mainly from India and China) for at least twenty years, now belong not only to our country.

In fact, it turns out that Russia ranks second in arms exports due to the fact that it sells technologies together with weapons. However, sooner or later, the technology will end and then the demand for Russian military equipment among the main buyers may drop significantly. It can be a fatal mistake that the money spent on R & D in the field of weapons development is scanty. The country spends on research and development four times less than Japan, three times less than Germany and half the size of the Czech Republic. Rosoboronexport keeps only 3% of the profits for the sale of weapons (the rest of the money goes to the state and the manufacturers). If we consider that the profit from the sale of weapons in the past year amounted to 7,4 billion dollars, the share of Rosoboronexport in it is about 220 million dollars. These funds are spent on salary, participation in exhibitions, as well as marketing. These funds are used to finance the development of export samples. What is the share of each of these items of expenditure, Isaikin did not specify, but it is clear that in any case, the money allocated for research and development is clearly not enough. The total military budget of Russia over the past year amounted to slightly more than 1,25 trillion. rubles. Practice shows that Russia spends only a little more than a third of this amount on the development and procurement of new military equipment.

It should be noted that after the "five-day war" came the realization that it is necessary to change this proportion. The volume of the state defense order is gradually increasing. However, the control system for the expenditure of funds, which is still very imperfect, is also important.

In order to preserve its export potential, Russia is reviewing its strategy of working with foreign partners, in particular, trying to increase arms shipments to third countries, not limited to China and India. The most popular destinations for Russia are Latin America and Southeast Asia - Indonesia, Malaysia, and Singapore. In the first two countries, the volume of purchases increased by about two times, in Singapore - more than seven. Russia almost completely covers the armament requirements of Venezuela. The package of Venezuelan orders in less than two years exceeded 3 billion dollars. According to American analysts, Russian exports were also successful in other Latin American countries, including Colombia and Uruguay.

All these countries work with Russia because domestic weapons combine quality and relatively affordable prices. In addition, Russia allows for various forms of payment - from counter deliveries of goods of traditional national export and Russian participation in the implementation of economic projects in these countries to payment in repayment of past debts of our country and the provision of loans. In addition, if Russia had previously sought to sell military equipment as such, now Rosoboronexport provides a range of services, including production, maintenance, repairs, and even recycling.
Despite the existing problems, Russia remains one of the largest players in the global arms export market and will remain so for quite a long time. However, if you do not increase the cost of research and development, training, the development of the production base, the position of our country will fall from year to year. Our main customers will be third world countries with low purchasing power, and there will be nothing to provide for their army. A case in point is the example of the purchase of French Mistral helicopter carriers and technologies for their production. This fact suggests that Russia, which for decades has been the most powerful weapon power, can no longer fully meet its own weapons needs.