Russia as the main ally of the United States: this is the turn!

27 September 2017
54
Moscow could become Washington’s main ally in the fight against the buildup of nuclear weapons by North Korea. There is every reason for such a geopolitical turn: only recently has Russia voted twice at the UN for sanctions against the DPRK. 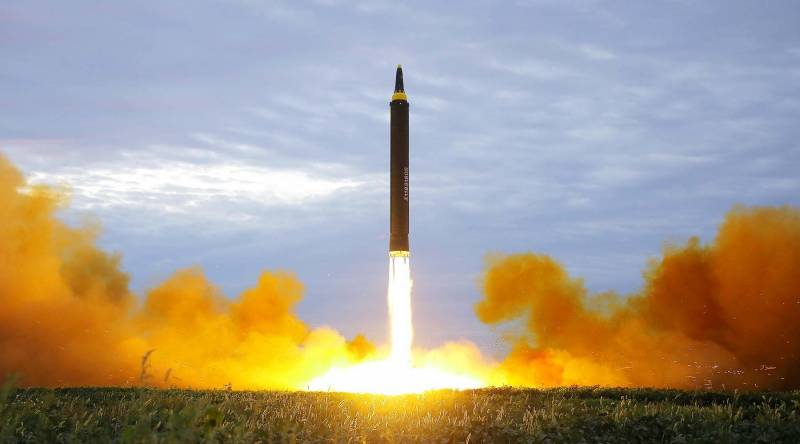 In the influential newspaper Financial Times An article by Fedor Lukyanov (Fyodor Lukyanov), the editor of Russia in Global Affairs magazine, was published. The author believes that Moscow can benefit from the DPRK missile tests.

Vladimir Lenin, the leader of the Bolsheviks, hated the German Social Democrat E. Bernstein, who proclaimed that "the ultimate goal of socialism is nothing, and movement is everything." Lenin considered Bernstein to be a “revisionist.” The Leninist concept was the opposite: to achieve the goal as quickly as possible, regardless of its price, recalls Lukyanov.

Russia has long abandoned Leninism and adopted the Bershtein approach: the process is more important than the result. And this is fully confirmed by the approach of Moscow to North Korea.

Strange as it may seem, Pyongyang still officially follows Lenin's teaching: the end justifies the means. Although the North Korean missile crisis does not have an easy solution, but managing it is both possible and necessary, the expert believes. And if Russia "does it skillfully," it will strengthen its position in the Asia-Pacific region and even slightly push back in international affairs the American hegemon. Moscow sees this situation, and this "explains some of the controversial statements of the country's officials."

Russia supported the UN Security Council resolution to tighten sanctions against North Korea. At the same time, Russia's permanent representative to the UN, Vasily Nebenzya, warned that “there will be no new sanctions”, since they will not be able to prevent the threat.

Mikhail Ulyanov, director of the Department for Non-Proliferation and Arms Control at the Russian Foreign Ministry, unequivocally condemned Pyongyang’s behavior, but stressed: “In the absence of truly reliable international legal guarantees for its national security, North Korea relies on nuclear missile weapon, considering it primarily as a deterrent. "

The Kremlin understands North Korean psychology, Lukyanov believes, since Russia itself in its stories I also felt themselves besieged more than once. For North Korea, this is not about bargaining, but about survival: Kim Jong Un knows the fate of Saddam Hussein and Muammar Gaddafi. Nuclear missiles for him are a bit of life insurance.

For many years, recalls the analyst, the DPRK was not a priority for Moscow. Now the situation has changed - both domestically and internationally. A recent study by the Rand think-tank of the Russian strategy in the Middle East showed: “The most notable elements of the Russian strategy — its multifaceted diplomatic relations or its recent interventionist tendency — are likely to be replaced by longer-term economic, energy and arms deals.”

Russia has a unique position in East Asia. It has functioning relationships with all countries involved, with the possible exception of the United States. China is an important partner, relations with South Korea are also quite close, the “echo of special relations” with North Korea still remains, and ties with Japan are being strengthened. Resolving the North Korean problem would give new opportunities to the Russian economy, since promising energy and transport projects (gas pipeline to South Korea and expansion of the Trans-Siberian route) are blocked by the isolation of North Korea and are fraught with the risk of an escalation of regional conflict.

Decades of the six-party talks failed to stop Pyongyang’s nuclear ambitions and develop new approaches, the author recalls. Russia and China could probably offer a more ambitious agenda: for example, North Korea freezes missile tests, and the United States and South Korea impose a moratorium on large-scale military exercises. One of the possibilities to implement this is a joint initiative of Russia and China, offering security guarantees for North Korea and including the DPRK in major regional economic projects in exchange for stopping provocations and checking the freezing of a nuclear missile program.

According to the expert, such an initiative would place the burden of serious responsibility on the shoulders of Moscow and Beijing. In particular, the expert points to the obligation to "punish" North Korea for non-compliance with the agreement.

In addition, in Russia and China it is widely believed that North Korea’s provocations are playing into the hands of the United States, giving an excuse for the US military buildup in East Asia (where China is the main target).

Against the background of the existing UN sanctions, Russia and China could increase the pressure on Pyongyang without pushing it into a corner and leaving the possibility of dialogue. The longer this state of affairs lasts, the more obvious is the inability of the United States to resolve the crisis.

The topic of Russia's active participation in resolving the North Korean crisis is developed in an article by Dmitri Trenin, the director of the Carnegie Moscow Center and a member of the Council on International Affairs of Russia. The material of the author was published in the newspaper. "New York Times". In his opinion, with regard to the de-escalation of the North Korean crisis, Moscow "is in a unique position."

Despite the growing tension in relations with Washington, Moscow has twice voted in the UN for the introduction of sanctions against North Korea twice in recent weeks, the expert reminds. Russia has every reason to help North Korea. Like China, Russia is a nuclear power, a permanent member of the United Nations Security Council and a neighbor of North Korea. Moscow also has established ties with Pyongyang. President Vladimir Putin visited Pyongyang in 2000. Despite the fact that he was unable to agree on limiting the North Korean missile program, his visit helped restore ties with Pyongyang, which was neglected in Moscow after the collapse of the Soviet Union.

At the same time, the author recalls, Russia is not among the countries directly or indirectly affected by North Korea’s nuclear ambitions, such as the United States, South Korea or China.

But Russia has a direct interest in de-escalating the current crisis. Vladivostok is just a few hundred miles from several North Korean nuclear and missile facilities. Any malfunction or failure in North Korea’s nuclear tests, as well as a missile launch error, can mean problems for Russia.

Finally, the Russian government seeks to limit the further deployment of US missile defense systems in South Korea and Japan (both countries seek to protect themselves from North Korea).

North Korea will not "denuclearize": for this it is too late, the expert believes. And it is not recognized as “officially” a nuclear power. However, in the end, she will get nuclear weapons that reach the territory of the United States.

This does not mean that sanctions are a mistake. They remain a valuable expression of collective condemnation and affirm the goal of nuclear non-proliferation in the world. But they will not stop North Korea’s nuclear ambitions.

The complete blockade of the country is something risky, even in the attempt itself. This could push North Korea to the start of the war.

Therefore, the only viable strategy, Trenin believes, is the conviction of the North Korean leadership that it already has “the necessary deterrent”; going beyond this by creating even more nuclear weapons and long-range missiles will be counterproductive. It is here that Russia appears on the scene: it helps push Pyongyang to strategic restraint and thereby helps the world defuse tensions.

Pyongyang can be interested in the economy. One of the projects that has already been discussed in the past is connected with the construction of gas pipelines from Russia to South Korea through North Korea. Another project - the restoration of the old railway line, which was used to connect South Korea to the Trans-Siberian Railway. The projects will give Pyongyang a transit fee. As another expression of goodwill, the Russian government could allow more North Koreans to work in their eastern regions.

By the way, the economy of North Korea works better than is usually assumed. North Korea's gross domestic product grew by 3,9 percent between 2016 and 2017. Market forces are emerging in the country (in the food and real estate trade). This means not only that North Korea today can better resist sanctions, but also that economic proposals can accelerate its reform. It is possible that in the future the DPRK’s position may be softened at the international level.

Ultimately, Washington and Pyongyang will have to resume direct negotiations.

Russia pursues a policy of maneuvering: it recognizes the policy of sanctions against the DPRK as useless and ineffectual, and at the same time approves sanctions together with the United States.

It can be assumed that the openness of the international community towards North Korea, proposed instead of the traditional pressure of the United States, could really push the DPRK to change. If Mr. Trump, with his unpredictability, can only break the wood, then Moscow could, against this background, pursue a rational policy of economic rapprochement - where it does not contradict the sanctions of the UN Security Council. And if Washington were to "inherit" such a policy of Moscow towards Pyongyang, the Kremlin would indeed get a point in international politics.

However, we must not forget that for the success of such a policy, Pyongyang must freeze the nuclear program and "open up" to external experts. Such openness of the “Leninists” still looks fantastic.

Observed and commented on Oleg Chuvakin
- especially for topwar.ru
Ctrl Enter
Noticed oshЫbku Highlight text and press. Ctrl + Enter
We are
Results of the week. “If I am leaning against a warm wall in a quiet place, then I’m still nothing at all!”Results of the week. "Who you are lucky, in fact, and will carry a cock, and such a bird as you, I, too, will rush!"
Military Reviewin Yandex News
Military Reviewin Google News
54 comments
Information
Dear reader, to leave comments on the publication, you must sign in.