The London Messiah, or the March Theses of Boris Berezovsky 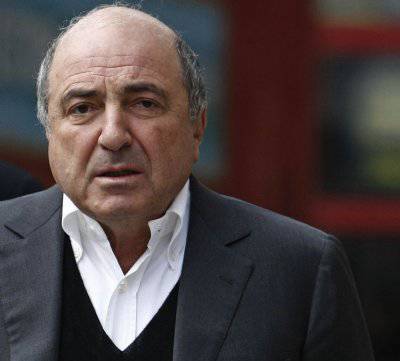 It is obvious that the dank and foggy climate of London is fogging not only the streets of the British capital, but also the minds of some of its inhabitants. Someone goes to indulge in heavy thoughts to the Tower Bridge, someone contemplates the dirty waters of the Thames, and someone hits the writing on the topic "How to re-dissolve Russia."

Let us realize that if the abbreviation CDDRR has ever said anything to us. We, obviously, did not speak, but Boris Abramovich Berezovsky, apparently, did not give rest all the time.

After the disgraced billionaire, he was a “prisoner of the regime”, he discovered the wonders of social networks and Internet blogs, the craving for the use of various sets of adjacent letters, which sometimes by fate turn into words, ceased to give Mr. Berezovsky rest. As the famous Bulgakov hero once ran around the apartment of Professor Preobrazhensky with the words "Abyr ... Abyr ... Abyrvalg!", So, apparently, Boris Abramovich began to rush about his 10 million-person estate of Hascombe Court early in the morning with a strange word in his language - CDDRP! .. CDDRP !! CDDRP !!! The family apparently thought that Boris Abramovich also reread the “Dog's Heart” once again, but then they realized that the owner caught his wave.

Subsequently, Mr. Berezovsky himself, with the help of his blog, rushed to clarify that the CDWP is nothing more than the name of a completely new party - the Christian Democratic Revolutionary Party of Russia, which he and himself are going to announce April 15 as a leader. Why is 15 April? - the possible interlocutors could ask Boris Abramovich a question, but, apparently, there were no such people at the time near the oligarch, since the BBC journalists had already stopped keeping up with Boris Abramovich’s activity, and he revealed his main secret to the Internet. April 15 comes the day of the Resurrection of Christ, and then the party will find its true name - "The Party of the Resurrection" ...

No one could have imagined that Mr. Berezovsky is such a fervent Christian that he sees in himself a spiritual need to organize on this basis a whole political party. The disgraced oligarch decrypts the name of the CDDPR so that people uninitiated in the activities of this London dandy can get tears from emotion.
According to his plan: Christian - because the party is based on love and freedom. Apparently, in the case of Boris Abramovich, on the love of appropriating millions and freedom from compliance with the laws of Russia.

Democratic, since only democracy in Russia is capable of realizing the plans of this party. Here, too, need to make a reservation that the word "democracy" Boris Abramovich, apparently, means the power of the majority, but the majority are not people, but bills in wallets.
There will be a revolutionary party, because the orthodox Christian Berezovsky is going to make a revolution (and this, God sees it, in a Christian way) - a revolution in the transition from paganism to the total Christian mentality in Russia. Well, the fact that Muslims alone live on the territory of Russia more than 5% of the population, Boris Abramovich, obviously, cares little. He said - Christian mentality, it means - Christian!

HDRPR with banners, sewed by Boris Abramovich, should, according to his plan, destroy political chaos in Russia and create an effective modern state. Apparently, the state that was during the time of active creative activity of Berezovsky himself in the 90-s.

Another March thesis of Mr. Berezovsky was that he was not going to register his own party, since he could not ask "criminals to give life to their grave-diggers." From these words it becomes obvious that Boris Abramovich literally with his whole head went into the early Christian esoteric ...

It is possible that the idea of ​​entering Russia on a white horse of Orthodoxy came from the London fugitive after a Russian court sentenced him in absentia to 13 years in prison. In all likelihood, the number of 13 made too big an impression on Boris Abramovich, and he manifested deep-seated desires for great religiosity.

Having typed the words “The process has begun,” the oligarch clicked on the Enter key and launched his next appeal to the people of Russia on the Web. And indeed, if not for the work of Boris Abramovich in London, today, frankly, it would be boring in Russia. The electoral videos of Vladimir Zhirinovsky went to the archives, the domestic opposition also lost their revolutionary enthusiasm. And here - here you are, get it, sign it - Boris Abramovich with his CDDRP.

How this should be familiar to us - the Russians: the creation of "saving" parties is not within Russia itself, but somewhere in Foggy Albion. It is possible that the influence of London smog does its work, and party authorship at different times overshadows all new and new people. True, in this case the oil painting “Boris Abramovich on the armored car” is unlikely to be painted by the artisthistorybecause we have so far, thank God, and the lower classes still want tops, like, they can ...

Thank you Boris Abramovich for the notion! For our part, we can offer a slogan for your party: “If it becomes boring, sir, then join the CDDRP!”