18 September 2017
9
To the propaganda "mouthpieces of the Kremlin", the channels "RT America" ​​and "Sputnik", living in a blessed liberal paradise is not easy. On the freedom of speech, the "cool" agency fought: the FBI. The advanced American public is opposed to measures taken by the EFBA: do citizens without the FBI scissors cannot understand what to listen to and what to watch and what not? 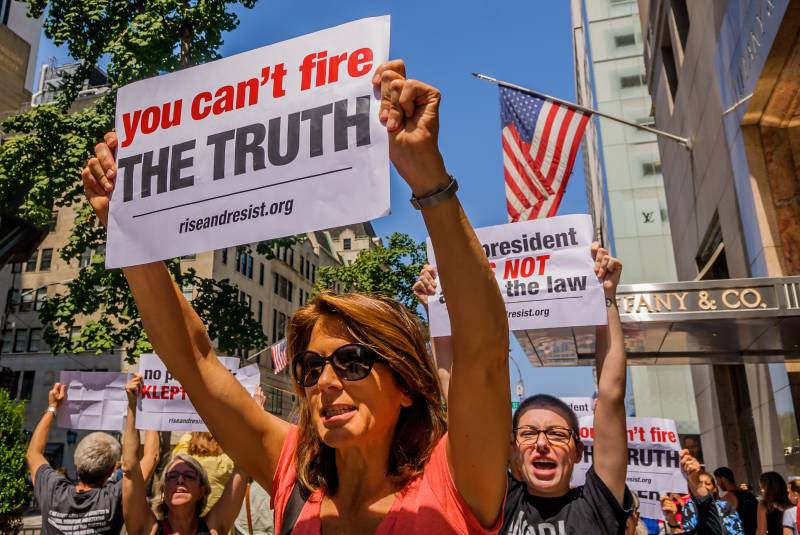 The FBI questioned the former correspondent of the Russian state agency "Sputnik" in the White House, the portal reports Yahoo News. The interrogation was conducted as part of an investigation into the Kremlin’s "propaganda hand" case. The investigators wondered if the Russians had not violated the Foreign Agents Registration Act (FARA).

According to Yahoo News, the bureau "received a flash drive containing thousands of internal Sputnik e-mails and documents: materials that could help the prosecutor build the charge of the news agency for conducting a specific campaign of the Russian government." This is a campaign during last year’s US presidential election. Moreover, according to intelligence officials, this propaganda campaign by the Russians continues to this day.

The FBI’s letters were handed over by the agency’s former correspondent, Andrew Feinberg: he uploaded the materials to his laptop, before he was fired (he was fired in May). He confirmed to Yahoo News that an FBI agent interrogated him for more than two hours.

According to Feinberg, the investigation is devoted to “Sputnik’s internal structure, editorial processes and financing.” “They wanted to know where orders came from, whether I ever had a“ direction ”from Moscow, said Feinberg. “They were interested in examples of exactly how I was“ directed ”to cover certain problems.”

The special investigation of Robert Muller, reminds a portal dedicated to Russia's attempts to “disrupt the election of the 2016 of the year,” has so far failed. “We do not confirm whether specific issues are an integral part of our current investigation or not,” Muller’s press secretary said restrained. A representative of the Ministry of Justice declined to comment. The FBI did not answer the questions of the press either.

However, the FBI investigation is ongoing at a time when members of the U.S. Congress and others are pressured the Justice Department to step up FARA enforcement against two Russian news organizations: "Sputnik" and "RT" ("Russia Today").

“This is incredibly important,” said Asha Rangappa, a former FBI counterintelligence agent and now deputy dean of the law school at Yale University, about questioning the bureau of former Sputnik reporter. According to the expert, “since the 1970s, the FBI has tried not to perceive its own activities as a violation of the first amendment.” However, in this case, the agents clearly have “good information”. There is a conviction that these news organizations "act on behalf of the Kremlin", and their line "represents a serious threat" to American democracy.

In his comments for Yahoo News, the editor-in-chief of Sputnik in the United States, Mindia Gavasheli, said: “Any statement that we are not a news organization is simply not true.” He also said he did not know about the FBI investigation. “I hear about this for the first time,” noted Gavasheli.

The investigation into the “Sputnik” Havasheli explained the “atmosphere of hysteria”.

Sputnik’s spokeswoman later released a statement: a news company turned to the US Department of Justice after notifying of the investigation. The statement also stated that Sputnik is a “news agency” broadcasting “accurate news”.

“Our journalists have won numerous awards for media around the world. Any statement that “Sputnik” is something other than a reliable news publication is incorrect. ”

However, in the US intelligence report, “Sputnik” and “RT” are identified as weapon Russian "state propaganda machine", which served as a "platform for messaging the Kremlin with the Russian and international audience."

The investigation, as suggested by the website Yahoo News, focuses on the possibility of applying to the Sputnik agency the Law on the Registration of Foreign Agents, adopted by the US Congress back in 1938 year to fight Nazi propaganda. The law requires foreign actors seeking to influence American public opinion and participating in lobbying to submit detailed reports on their funding and operations to the Department of Justice. If the Department of Justice concludes that Sputnik is covered by this law, its leaders in the United States may face criminal charges and fines, and the news agency’s messages will subsequently be clearly designated as “foreign propaganda.” They can not be presented simply as news.

In accordance with the law, there is an exemption for news organizations for media organizations involved in legal activities. However, Feinberg, a former Sputnik correspondent, says that the FBI has focused its questions around what “stories»Promotes" Sputnik ", where the instructions came from. The bureau is also interested in funding sources. Feinberg says this simply: “Moscow wants it or Moscow wants it.”

The flash drive, which agents are now studying, can shed light on the financing of Sputnik, its activities in Washington and how the agency makes “editorial decisions”. Mr Feinberg also confirmed that the main source of company funding is the Russian government.

This is not to say that FBI initiatives have delighted the American democratic public. The persecution of Russian media outraged American press defenders, writes Lloyd Grove in the publication "Daily Beast".

The FBI's “sight” on the Russian channels “RT” and “Sputnik”, which are supposed to have violated the Foreign Agents Registration Act (FARA), creates a “dark precedent for the American media,” the author believes.

“Regardless of my feelings about Russia, Sputnik or RT, I think it concerns the FBI’s participation in determining who is and who is not a journalist,” says Trevor Timm, executive director of the Press Freedom Foundation .

Lawyer in charge of cases of violation of the First Amendment, press attorney Lucy Dalglish, dean of the College of Journalism at the University of Maryland, warned that the government’s actions against Sputnik and RT resemble a slippery slope. And this descent of a lawyer is “unnerving.”

Dalglish noted in a conversation with the Daily Beast that when starting such a process it would be difficult to stop it. Dalglish believes that after the Sputnik scandal, law enforcement officers will start working with RT, and then with other “alleged news organizations.” The result will be a “big hunt for people” who are “not registered” by law.

Not everyone is ready to confront the FBI. The American Civil Liberties Union, known for its uncompromising purity in freedom of speech, refused to "fight".

Floyd Abrams, an outstanding interpreter of the constitutional amendments, has no doubt that Sputnik is involved in news and that its activities are “usually protected by the First Amendment”. However, if the Russian media owner ordered to limit news coverage in order to support one candidate for the presidency of the United States, giving him an edge over the other, this would have “the most direct connection” to the investigation concerning the national security of the United States. The point is not what Sputnik says, but that “Russia's decision to participate in such activities is of great importance.” Abrams added: "I think that foreign governments will understand the feasibility of such an investigation." Still, "it is imperative that the FBI stay away from investigating American publications based on their editorial positions." "The days of Hoover," concluded the expert, "are over, and we should not undertake something that could revive them."

The publication also cites the opinion of Mr. Feinberg mentioned above. “Sputnik” does not function as a bona fide news agency, ”he says. “For me, this [activity of Sputnik] is more like an operation to collect public information than to the news space.” He explained that he does not understand the world of intelligence and simply expresses his opinion. If the FBI investigation sets a precedent, he believes, foreign governments will not be able to do their “trashy propaganda disguising themselves as journalism” in order to “hide behind the First Amendment”, which in the US is guaranteed to “bona fide journalists”.

The information about the interrogation of the FBI by the former employee of the channel “Sputnik” was commented by the chief editor of “RT” and “Sputnik” Margarita Simonyan.

"There is no doubt, - said she, that Russia will respond to the FBI investigation with the same, and now they will begin to check the work of American journalists in Moscow. All this is more than disgusting. Free speech spins in the coffin. She was killed by those who invented it. ”

The opinion of one American journalist who has long lived in Russia is also known.

American journalist Michael Bom is confident that the initiative of the US Department of Justice is the desire to humiliate Russian journalists, whose work will be retrained in propaganda.

“I am against the assignment of“ RT ”and“ Sputnik ”to the status of“ foreign agents ”, - says Bom. - Let them go about their business in the United States. As the saying goes, "do not like it - do not listen." It is better not to interfere with “RT” and “Sputnik” to “lie” in this sense. Let the American readers and viewers decide for themselves what is “yellow media” and what is not, what is “trash”, and what is respectable media. ” “The media, freedom of speech, and the First Amendment to the US Constitution are all holy,” notes Michael.

All animals are equal, but some are more equal than others, Orwell would say about this. Bom considers the holy constitution and amendments, but the FBI and the Justice Ministry may consider themselves a bit "holier".

Ctrl Enter
Noticed a mistake Highlight text and press. Ctrl + Enter
We are
The action “Military service under the contract is your choice!” In Rostov-on-Don: future contract servicemen, exhibitions and “Russian Knights”Situational analysis of the death of the MH17 flight (Malaysian Boeing 777), made on the basis of engineering analysis from 15.08.2014
9 comments
Information
Dear reader, to leave comments on the publication, you must to register.