13 September 2017
139
One of the most interesting domestic developments in the field of armored vehicles is the so-called. support combat vehicle tanks (BMPT). Russian designers developed and offered customers several projects of similar equipment, however, for some time, BMPTs remained exclusively exhibition models without any real prospects. However, a few years ago the situation changed, and tank support vehicles could still become the subject of new supply contracts.


The idea of ​​a tank support combat vehicle in its present form was realized by the designers of the Ural Transport Engineering KB at the turn of the nineties and two thousand years. The project under the designations "Object 199" and "Frame", later received the new name "Terminator", meant the restructuring of the chassis of the T-90 tank with the installation of a new combat module with a developed weapon system. Having on board the barrel and missile weapons, such an armored vehicle could solve a wide range of combat missions.

At the end of the nineties, the overall appearance of the weapons complex for BMPT was formed, which is still being used with various changes. After some improvements and checks, the Terminator received a pair of 30-mm automatic guns 2А42, two twin launchers of Ataka-T missiles and a PKT machine gun mounted on a rotating turret. In the case placed a couple of automatic grenade launchers AGS-17. 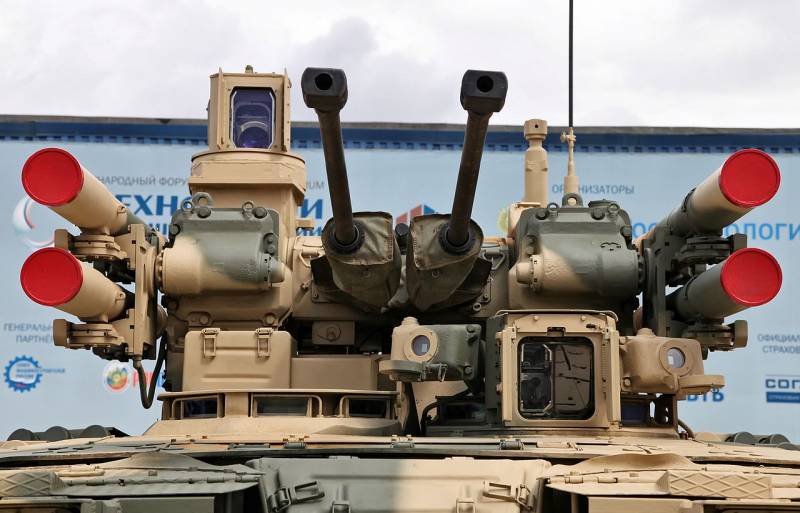 In the middle of the last decade, BMPT prototypes passed all necessary checks, including state tests. However, it did not go further: the experienced "Terminators" remained exclusively exhibition copies with no real prospects. Over the next few years, the leadership of the ministry talked about the possibility of adopting the Framework, but in 2010, such plans were abandoned.

In 2013, the Uralvagonzavod corporation proposed two new variants of the tank support combat vehicle. The first project involved the installation of a special tower on the chassis of the medium tank T-55 and was intended for one of the countries of Latin America. For several reasons, this project did not give real results. The second sentence also concerned the use of an alternative chassis. The armored vehicle under the designation "Terminator-2" was to be built on the chassis of the main T-72 tank.

Since 2015, in various materials, a new modification of the "Terminator" is mentioned, having certain differences from previous machines. The Armata unified tracked platform should be used as the basis for it. At the same time, according to some data, to obtain a significant increase in combat power, this option BMPT should be equipped with the A-220М “Baikal” module equipped with an 57-mm automatic cannon. Unlike a number of other family developments, the BMPT on the Armata chassis has not yet been presented to specialists and the public.

Having a distinctive and recognizable technical look, as well as being distinguished by the range of tasks to be solved, 199 Object and other machines based on it always attracted attention. The armored vehicles received accolades, and the greatest future was predicted for it. However, such predictions did not materialize. For several years, the real prospects of the “Frame” remained in doubt.

By the beginning of this decade, the issue of the supply of "Terminators" to the Russian army was resolved: the command refused to purchase such equipment. However, it soon became known about the start of mass production of armored vehicles. Starting customer BMPT were the armed forces of Kazakhstan. The contract meant the delivery of a dozen combat vehicles in 2011-2013. On time, the order was fully completed. At the beginning of 2014, there were reports of a possible continuation of supplies, and now it was a question of transferring assembly kits to Kazakhstan. As far as is known, such an agreement did not appear.

In the middle of June, reports appeared on the profile editions about the possible resumption of BMPT production. According to published information, the company "Uralvagonzavod" at that time was preparing to assemble new armored vehicles. In addition, servicemen of the Russian armed forces arrived at the enterprise. All this indicated that in the very near future the Ministry of Defense should have placed an order for a new equipment.

According to June, the first serial "Terminators" for the Russian army were to leave the assembly hall next year. Can be built at least a dozen cars. In terms of their equipment and weapons, they should correspond to those previously released for Kazakhstan. BMPT for domestic units will be built on the chassis of the T-90 and get a pair of automatic guns, supplemented by Atak-T missiles, machine guns and automatic grenade launchers. The possibility of updating fire control systems using the developments of the Terminator-2 project was not excluded.

During the recent international military-technical forum "Army-2017" reports of the serial release of "Terminators" for the Russian army received confirmation. As it became known 24 August, the Ministry of Defense of Russia and the corporation "Uralvagonzavod" signed several large contracts for the supply of various armored vehicles. One of these contracts involves the construction and transfer of an army of a certain number of tank support vehicles. The number and equipment of the ordered equipment, however, were not specified.

In the future, there may be several new export contracts. Literally the other day, the head of the Main Armored Directorate, Lieutenant General Alexander Shevchenko, said that the Israeli and Syrian military showed their interest in the Terminators. It is worth noting that the Syrian military have already had the opportunity to get acquainted with the original Russian design. The BMPTs were previously sent to Syria for testing under conditions of a real local conflict, and proved to be the best. According to the results of such exploitation, official Damascus could show interest in the new Russian technology. It is noteworthy that the "running-in" of combat vehicles in Syria had a definite influence on the decision of the Russian military.

Back in 2013, there were reports of the possible supply of tank support vehicles to Algeria. A few days ago, the domestic and foreign press reported the existence of such a document. According to published data, a contract for a large number of "Terminators" was signed last year. Algeria will have to get more than 300 BMPTs on the main chassis of the T-90CA tank. Armament and fire control systems should be borrowed from the Terminator-72 BMPT-2 project. It is alleged that this technique will accompany the tanks of the ground forces and protect them from various threats. 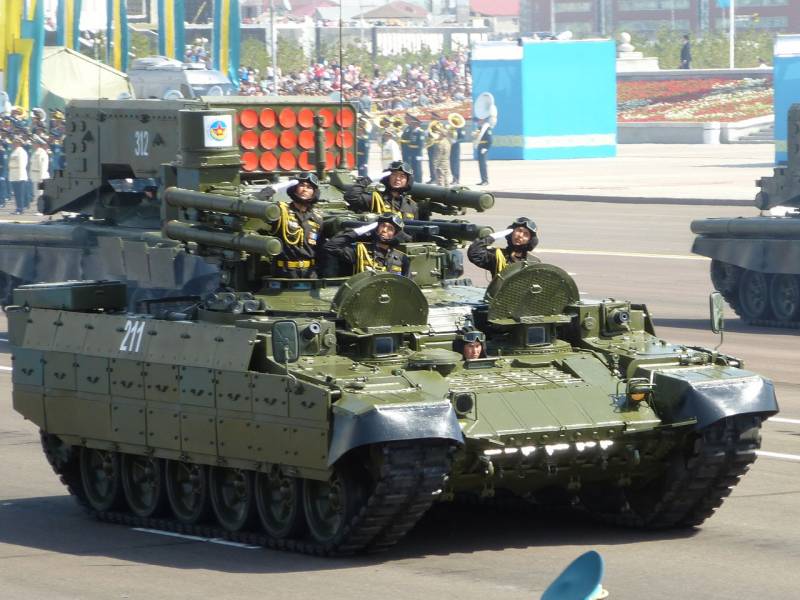 According to reports, the first BMPT will go to Algeria at the beginning of the next 2018 year. The last batch of machines must be handed over to the customer before the start of the 2020. Thus, the largest contract will be executed in about two years.

At the moment, it is known about several completed and signed contracts for the supply of serial tank support vehicles. In accordance with these documents, by the end of this decade, the total number of built "Terminators" in different configurations will reach the level of 320-350 units. At the same time, at the moment, there are only ten vehicles built for Kazakhstan in several years ago in full-fledged army service. Thus, the manufacturer has very serious tasks.

In the case of the BMPT program, a very interesting situation can be observed. The original combat vehicle proposed at the beginning of the last decade not only attracted attention, but was also criticized. After reviewing the proposed model, the Ministry of Defense did not show the expected enthusiasm. Throughout all the zero years, the adoption and purchase of “Terminators” was constantly postponed until they were finally canceled.

Only at the end of the decade the car became the subject of a contract, however, in this case it was only a small batch of equipment. A few years later, the situation began to change. At least in 2013, Algeria showed its interest in BMPT, but its order was signed with some delay. According to media reports, this delay was associated with the expectation of a new modification of the armored vehicle, which is characterized by increased characteristics. Finally, in 2017, the decision to adopt the Terminator was adopted by the Russian army.

It should be noted that in all these cases, the armored vehicles of older modifications, involving the use of existing tank chassis, became the subject of new orders. The current status and prospects of the "Terminator" on the chassis of the "Armat" remain unclear. Apparently, such a project is not yet ready even for testing, and therefore it will be possible to speak of real results only in a few years. Nevertheless, given the existing plans for the development of the fleet of armored vehicles, it can be assumed that such BMPT has certain chances to get into the troops. However, if this happens, it is only in the distant future.

Apparently, only a few years after the “premiere demonstration” of the first version of the BMPT, the commanders of various countries began to understand the need and real prospects for such equipment. Local conflicts of recent years have a number of characteristic features in the context of weapons and equipment, and therefore samples with the capabilities of the "Frame" can be of great interest. The consequence of this has so far become small orders from Russia and Kazakhstan, as well as a large contract with Algeria, implying the delivery of more 300 armored vehicles. It should also be expected that in the foreseeable future, Russian industry will receive new orders for the "Terminators" of certain modifications. After several years of painful uncertainty, the fate of the family of equipment was resolved. Cars go into a large series.