Who has not turned off the countdown for Erdogan?

13 September 2017
15
After the resumption of flights to Turkey, the Voronezh airport shows a growing interest of residents not only in the Voronezh region, but also in neighboring areas, to travel to this country as tourists. To meet the demand, the airport had to increase its charter services. Today, the charter program includes 4 flights to Antalya, operated by VIM-Avia, Azur Air, Royal Flight and Ural Airlines. In addition, there are regular flights to the same Antalya, as well as to the largest Turkish city - Istanbul.


Additional flights to Antalya and Istanbul are carried out not only from Voronezh and both capitals, but also from the airports of Nizhny Novgorod, Rostov-on-Don, Krasnodar and other Russian cities. In addition, some compatriots continue to use transit airports, including Baku, Minsk and others.

The relative cheapness of travel to the resorts of Turkey for many of our citizens sometimes dulls their sense of responsibility towards themselves. Even when relations between Russia and Turkey, as diplomats say, were at the lowest point due to the strike of Turkish fighters on the Russian Su-24M bomber in the skies of Syria, some fellow citizens tried their luck, going to Turkey through third countries. And this is despite the official ban on air travel from the Russian authorities and the constant warning of a significant terrorist threat in the territory of the Turkish Republic. We flew through Belarus, Kazakhstan, Azerbaijan and other countries.

On the one hand, it is quite possible to understand the desire of citizens to save money, but on the other hand, can their own safety and the safety of their children be measured by means saved on a tour, and indeed by any material benefits? A rhetorical question ...

Today, relations between Russia and Turkey are being restored. It even got to the point that Russia is ready to supply Ankara with air defense systems - anti-aircraft missile systems. On the eve of the information was published that Turkey has already made funds under a contract with the Russian Federation for the future supply of C-400.

The leaders of the two states often communicate both in a bilateral format and in the format of international summits and forums. Trade relations were resumed (well, perhaps, without the participation of Turkish tomatoes ...), transport routes were opened, direct channels of information exchange between law enforcement agencies and special services were launched. It would seem that there is no reason to talk about threats.

However, in reality, everything is far from being as simple as I would like to think.

Recently it became known that a seminar held by the Turkish Heritage Organization was held in the United States. The organization is based in Washington and acts as a counterbalance to the structure of the fugitive Turkish preacher Fethullah Gülen - FETÖ. In Turkey, FETÖ is officially recognized as a terrorist organization, since, according to local law enforcement officers, it was her leader, Gulen, who was involved in the attempt to implement the plan of the coup in 2016.

It should be recalled that Gülen currently lives in her home in the state of Pennsylvania, although official Ankara expected that after the change of the American administration, Washington would give Gülen to the Turkish security authorities at the request of the NATO partner, which Turkey itself is positioning. Trump and his entourage Ankara’s request is defiantly ignored, which causes, to put it mildly, Ankara’s discontent.

The head of the Turkish Heritage Organization (OTN), Ali Chinar, speaking at the seminar, said that the United States was following the wrong path, continuing to finance the schools of Fethullah Gulen in various countries around the world, including the United States themselves. These schools operate in 26 states from 50, and their total funding, including not only private assistance, but also transfers from the US budget, has reached more than 730 million dollars a year.

According to Chinar, FETÖ uses a substantial part of these funds for contacts with those who are trying to realize the interests of Gulen in Turkey itself. And the interest, in fact, is one - the change of power, I mean the removal from the post of President Erdogan.

Thus, it is emphasized that the financing of the organization, which in Turkey is accused of attempting an anti-constitutional coup, continues to take place. Moreover, funding comes from the United States, who clearly would like to see in the chair of the head of the Turkish state a more accommodating politician than Erdogan. More appeasable at least in the issue of attitudes towards Turkish Kurds, which, according to the most conservative estimates, are about 17 million.

And if financing goes, it means that someone in Turkey receives it. If desired, American financial institutions and special services could tell Ankara who the final recipient is, as transactions in Turkey in dollars without using American (or affiliated with them) sites are simply impossible. But the Americans are silent. So they have their own reasons. And your interest. 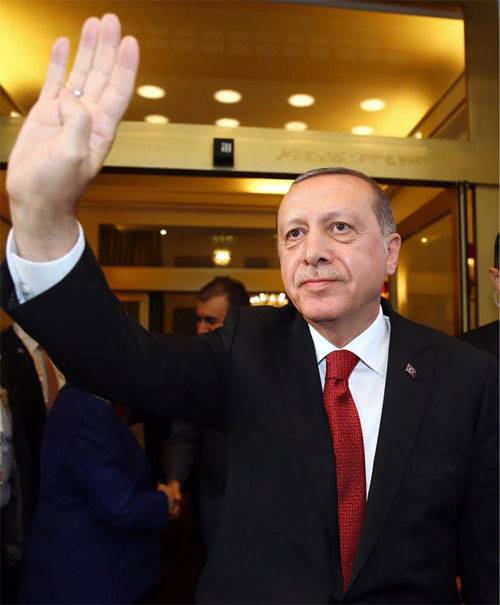 Accordingly, there is reason to think about the fact that the map of Gulen has not yet been fully drawn. The stubborn gentlemen are sitting in Washington. And if it did not work out last summer, they will make new attempts. Even in spite of the fact that Erdogan actually cleared the political field from competitors from among the Gulenists, it can be said that the forces that are ready to sweep away the current government in Turkey remain in considerable numbers. There remains at least the basis of the fact that funding from the US is coming.

In this regard, it can be stated that not everything is in order with security issues in Turkey. Anti-government forces are still sitting, so to speak, quieter than water and below the grass, but sleeping groups may well become more active at the most unexpected moment, when the western intelligence services once again arrive.

On this basis, it can be said that the Turkish coast has by no means ceased to be synonymous with a powder keg. The problem is that in the event of further unrest in Turkey, fueled by the West, tens of thousands of Russian citizens may be taken hostage in this actually divided in terms of attitude towards Gulen and Erdogan. And no charter will be enough to carry out an emergency evacuation, especially if a no-fly zone is announced, as it was last year. Then the Russian tourists in Turkey were no more than 5 thousand (due to the above-mentioned prohibitive measures and a blow to the Su-24). Now the situation has changed, and Turkish hotels are again filled with Voronezh residents, Muscovites, Tula residents, Siberians and other Russian passport holders and owners of a desire to rest without fail at the Turkish resorts, despite the presence of threats.

The situation in Turkey may well turn even further after the referendum was held in neighboring Iraqi Kurdistan. After all, if the Kurds of Iraq achieve independence (even if official Baghdad does not recognize it), then this will become a precedent for Turkish Kurds. And it is unlikely that American “friends” of Erdogan, who need to maintain pressure on the Turkish president to continue the geopolitical game in the Middle East, will not rush to use this card.

Ctrl Enter
Noticed oshЫbku Highlight text and press. Ctrl + Enter
We are
Ban flights to Egypt. What happened to the plane and what awaits the Russian tourist business?The action “Military service under the contract is your choice!” In Rostov-on-Don: future contract servicemen, exhibitions and “Russian Knights”
Military Reviewin Yandex News
Military Reviewin Google News
15 comments
Information
Dear reader, to leave comments on the publication, you must to register.