How much is Russophobia? 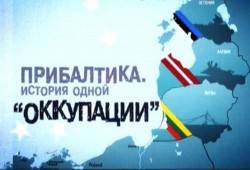 The official point of view of the authorities in Latvia is that from 1940 to 1991. the state was occupied by the USSR. In addition, the political “elite” of the country has an opinion that the liberation of Latvia from the Nazi invaders in 1944 – 1945 and the end of the Second World War brought the country not the freedom, but the continuation of the “Soviet occupation”. Established in the country in 2005, a special commission estimated the damage from this very “occupation” at 300 billion euros.


Today, the figure is already in 375 billion. The left opposition in the Seimas initially reasonably remarked that in this case it is necessary to make a complaint to Germany (the homeland of Karl Marx), Georgia (where Stalin was born - Joseph Dzhugashvili) ... currently for Latvian riflemen who actively implanted a communist regime on the territory of the former Russian Empire.

The mention of Latvian arrows is what is called a hit not in the eyebrow, but in the eye.

It was in the Baltics that the slogan “Power to the Soviets!” Was voiced earlier than in Petrograd: in September 1917 by the Revel Council, the Soviets of Latvia and the 2-th Congress of the Soviets of Estonia. A part of Latvia was occupied by Germany at that time.

Nevertheless, the United Council of Deputies of the Latvian rifle regiments of the Latvian division, created in 1915, was created, and, it must be admitted, bravely fought with its original oppressors - the Germans.

The Latvian rifle Soviet division was the first regular unit of the Red Army. 19 November 1917, one of the Latvian regiments, whose fighters were distinguished by "exemplary discipline and proletarian consciousness", was summoned to Petersburg to reinforce the revolutionary garrison. 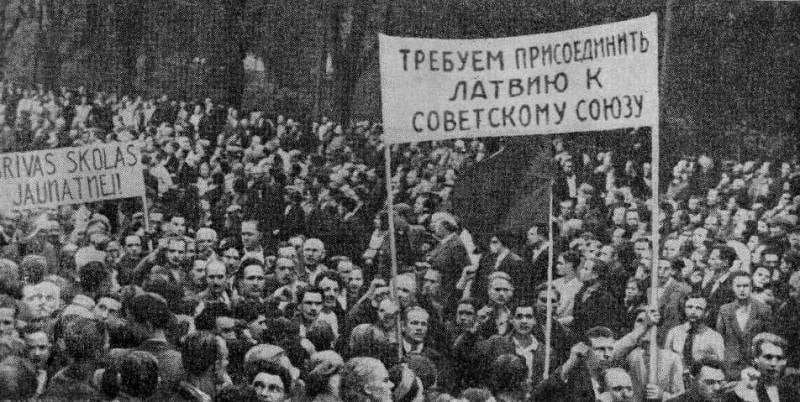 Such reference "soldiers of the revolution" were useful, for example, for the historical dispersal of the Constituent Assembly in early January 1918, which initiated the Bolshevik dictatorship in the country. And the 250 “most-most” people were assigned to a special combined detachment under the command of former Second Lieutenant Jan Peterson, who was entrusted with guarding the “cradle of the revolution” - the Smolny Palace. It was these arrows who protected the lettered train that transported Lenin and members of the government of Soviet Russia to a new capital, Moscow. Later, the squad of Peterson, which was transformed into a separate regiment, took under guard the Moscow Kremlin, where the leaders of the country lived and worked.

The rest of the Latvian Guard, too, was useful to the young Soviet Union. Part of the "guards" was used as a professional military, others found a place in the punitive organs. And the Latvian division created in April of the 1918, commanded by I. Vatsetis, turned into a kind of all-Russian “special forces” at all: its units participated in the defeat of almost all major demonstrations against the Bolshevik government. Some historians even claim that it was on Latvian bayonets that Soviet power was strengthened.

At the same time, Latvian riflemen everywhere demonstrated a “class approach” and a “revolutionary ruthlessness”. Especially the terrible memory of themselves they left in the Crimea.

People were shot, drowned in the sea, dropped from cliffs. In Sevastopol, all the trees, lampposts in the city center were hung with the corpses of "enemies of Soviet power." More than 100 000 people were executed, after which the Crimea was called the All-Russian cemetery. This is what famous composer Raymond Pauls says about this: “I studied a little about what happened in 1917 and 1918. Who were the main killers? Our compatriots. What they did in Ukraine! Who formed the whole KGB apparatus? Mostly ours and the Jews, although they were later eliminated themselves. Who defended that revolution? And who served in the protection of the Kremlin? Latvian arrows.

Their combat path was marked by the blood of tens of thousands of innocent victims throughout Russia — they committed atrocities even in Siberia. And were they sorry for the Russian peasants, workers, intellectuals, as well as other "internationalist fighters"? But if the Latvian riflemen were thus saved and defended by the revolution, did the Balts, and above all the Latvians, have the right to even stammer about the “Soviet occupation”?

However, this is a question from the region of that “rotten Soviet” morality, where high moral values ​​prevailed, with which modern Latvian “elitist” people do not bother themselves. They are unlikely to understand why an appeal to Moscow, demanding any kind of compensation, is not only low, but also absurd.

So, before the Second World War, the level of welfare of Latvia was hardly consistent, as the Riga politicians now say, with “leading positions”. The volume of industrial production in 1938 did not exceed even half of the production volume of the still “Russian” 1913.

1930 to 1940 in a formally independent Latvia (almost a protectorate of Germany), almost 5000 peasant farms were ruined. On the construction of factories and factories are not talking at all. More than 1 / 3 population was illiterate, 1 / 3 children aged from 6 to 11 years worked in agriculture instead of attending school. And in 1991, when Latvia left the USSR, in terms of GDP per capita, it occupied the 40 place in the world (!). Examples of such a successful state-building are unlikely to be found elsewhere. How to explain the "Latvian phenomenon"?

After the Second World War, the "invaders" not only did not take anything valuable out of the country, but also invested money in Latvia more actively than in the economy of the RSFSR. In 1946 — 1985 216 large industrial enterprises were built and rebuilt. Total 1946 — 1989 in Latvia, fixed assets for the total amount of 37902 million rubles (in 1984 prices) were commissioned, which amounted to more than 60 billion dollars, or an average of 1,3 billion per year (at the rate of 65 cop. per dollar). In reality, in 1990, the “per capita” income in Latvia was 16,5 thousand US dollars, and consumption - 26, 9 thousand dollars. The difference in 10,4 thousand was covered by the Russian Federation. A similar state of affairs persisted throughout the period of the “Soviet occupation”.

As a result of this policy, direct "investments" in the economy of the LatSSR amounted to 900% relative to the sum of all goods produced.

In fact, these were subsidies (as well as to other Baltic republics), because there were no dividends other than political and diplomatic from the content of this Baltic “European facade” of the USSR.

Naturally, it was not supposed to talk about it in Soviet times, which formed the myth about the remarkable abilities, resources of the Baltic republics, including Latvia, and about the amazing diligence of the population. And when Latvia (along with other Baltic republics) separated from the Soviet Union, they were sure that it was the Baltic that fed Russian “idlers”, “drunkards” and “parasites”. What is happening with independent Latvia now, if its president, Raymond Vejonis, speaks from a high rostrum: “We see that as soon as the development of EU funds is delayed, we immediately have a significant drop in gross domestic product growth. Does this mean that we really do not have our own economy? ”

Casket opens simply. Throughout the years of independence, Latvia (Estonia and Lithuania, too!) Only did what it charged us for “occupation” and demanded repentance. And if the share of industry in the country's GDP before the collapse of the USSR was 38%, then in the 1990s. it has already decreased to 20%, and during its stay in the European Union (from 2004) it fell to 9%. Modern Western studies directly point to the fundamental dependence of the Baltic economies on EU subsidies.

Lithuania, Latvia and Estonia have joined the EU on the rights of acclimatizers and stay in it out of grace, dependent on rich donor countries. But all the records among the Baltic “trinity” are beaten by Lithuania: it sends to the EU budget 244 million euros, gets 1,8 billion. The difference is more than seven times!

Brussels subsidies, by the way, make up 18,1% of the Latvian economy (18,6% of the Lithuanian economy, 16,6% of Estonia). The Baltic countries are among those “new Europeans” who, in the event of their withdrawal from the all-European monetary “allowance”, have no chance of surviving on their own. But after the “brexit” parasitism on the “old Europeans” for the Balts will end.

Latvia brought Russophobia to total impoverishment. Approximately 25% of the present-day Latvia’s GDP is given by Russian payments for transit via oil pipelines built by the USSR. About 80% of all railway freight traffic in Latvia, the volume of which is estimated at 263 million euros, is also transit from Russia. But when Moscow finally (and very late!) Realized that the Baltic countries were not able to construct their statehood on anything other than the opposition of Russia, and Russophobia in Latvia (Lithuania and Estonia) reached the stage of national insanity, it was decided to completely leave Baltic States without Russian goods. Russia began to build its own infrastructure in the Baltic instead of the Baltic.

Vladimir Zharikhin, Deputy Director of the Institute of CIS Countries, noted the economic benefits of transporting cargo to our own ports: “It is preferable for Russia to ship its goods through its own ports, rather than through the Baltic countries, which are members of NATO and the European Union and conduct a rather hostile policy towards us. It makes no sense to share profits with them ... "As the head of Transneft, Nikolay Tokarev, declared in October 2016, the company plans to stop the transit of raw materials through the Baltic States already to 2018.

Riga and Tallinn give way to Ust-Luga and Bronke, hundreds of people are threatened with dismissal, enterprises suffer heavy losses.

Latvia is on the verge of a serious economic crisis, which will hit many enterprises and workers only because cargo turnover in the largest among the Baltic countries in the port of Riga continues to decline.

Due to the retaliatory sanctions of Russia, Latvia is experiencing a crisis in the dairy and fishing industries. The country lost fishing fleet, and of the 22 fish processing plants that existed in the late 1990s, only three remained. Latvia was included in the list of the worst EU countries in terms of population welfare: out of 1 million 968 thousand inhabitants of the country, almost one in three people is below the poverty line - about 650 thousand (in 1990, the population of the Latvian SSR was 2 million 673 thousand people.)

By 2020, the Baltic ports will lose another 60% of Russian cargo, and transit will be reduced to almost zero. Russia refuses to cooperate with the Balts and condemns the Baltic Sea harbors to extinction.

But even in these conditions, the Foreign Ministry of Latvia declares a tough stance against anti-Russian sanctions - the toughest of all Baltic countries - and opposes Nord Stream-2.

Former SS men and their current followers are marching along its streets, while Russians are denied the right to be full-fledged citizens of this country.

The policy of the Russian authorities is fully understood and widely supported by the Russian society, which rightly sees in Latvia a radically Russophobic state and does not want to support it economically. So Latvians will have to pay their Russophobia from their own pockets. The price of this “pleasure” should be determined by the commission engaged in calculating the damage from the “Soviet occupation”.