At the anniversary celebrations dedicated to the centenary of the father of the Soviet atomic bomb, Academician Kurchatov, no one remembered this episode. Maybe in order not to cloud the holiday mood, and most likely because they did not know ... They did not know about the attempt on his life ...

This international Cold War scandal began with the 19 of April 1956, the watchman of the Soviet destroyer "Watching", who accompanied the cruiser Ordzhonikidze on a government visit to the UK, noticed a head covered with black rubber diving mask under the flagship stern. Both ships were on the roadstead of Portsmouth. The sailor immediately reported on the mysterious diver on duty on the ship, the commander ...

This fact would not have been duly publicized if the head of the Soviet state N. S. Khrushchev and N. A. were not on board the cruiser. Bulganin. Therefore, an official request was sent to the commander of the Portsmouth Naval Base. He escaped with an obscure answer. The Prime Minister of Great Britain A. Eden in the House of Commons could not explain anything plainly either. Perhaps these demarches would not have attracted much media attention, but a week after the detachment of Soviet ships from Portsmouth the British newspapers reported that a corpse of a diver had surfaced in Portsmouth Bay. It was the captain of the royal fleet Lionell Crabbe. An obituary claimed that Crabbe "died while testing new underwater equipment." But such things are not tested alone. The testers are always insured, and if misfortune happens, the diver’s body is not found a week later, but is lifted right away ...

What did Captain Crabbe do under the bottom of the Soviet cruiser in Portsmouth, risking a diplomatic scandal, risking his life? Studied secret hull lines or searched for any new devices? The fact that they are not there, the British intelligence knew as well as us, today, devoted almost all the secrets of the century. But above the bottom, in the cabins for the high command, the most important defense-strategic secrets of the Soviet country were hidden. Their carriers were at least two of the members of the government delegation - academician Igor Kurchatov and general aircraft designer Andrei Tupolev.

It is difficult to explain why Nikita Khrushchev took with him to England at once two completely "restricted to leave" scientists, on whose developments the entire strategic program of the USSR was based. Either he wanted to demonstrate his withdrawal from the Stalinist policy of the Iron Curtain, or he hoped to awaken loyal feelings to scientists, to achieve their special loyalty, special trust ... Perhaps he wanted to make an impression on the West - well, they say, living power Soviet science, its mighty potential. Anyway, Igor Kurchatov and Andrei Tupolev set foot on British soil from the newest cruiser, the handsome Ordzhonikidze, and then returned to him safely to go home.

According to the military doctrine of 50, the main means of delivering nuclear weapons there were airplanes aviation long range. Such machines were created precisely in the Tupolev design bureau. Tupolev bombers were supposed to deliver strategic attacks on the enemy with "Kurchatov" atomic bombs. Needless to say, what a tempting prospect was opening up for the Atlantis hawks - to decapitate with one well-thought-out terrorist attack the entire country's defense industry at once.

The temptation was fueled by the fact that the ends of a similar operation in the literal sense of the word hid in the water and rather deeply - at the bottom of the North Sea, which the Soviet cruiser had to cross with a representative delegation on board. Outwardly, everything looked as though the shadow of suspicion would not have fallen on the British crown: the British waters left Ordzhonikidze, went far into the open sea and ... blew up on an old floating mine, one of those that sowed thousands in the North Sea and the Germans and the British. In the 50-s, a lot of them still worn by the will of the waves. Combat trawling continued (at least in the Soviet Union) right up to the 1958 year.

The version of the undermining of the cruiser Ordzhonikidze on a crazy mine looked all the more convincing that only half a year ago, on the same "unwashed German mine," the battleship Novorossiysk was blown up in the North Bay. That night explosion (for some reason, the “unwashed mine” worked after midnight, and even in the area of ​​the artillery grounds, which were not detonated by a miracle) killed more than six hundred seamen. A government commission then named the most likely cause of the explosion - an old German mine. But this, as they say, for the general public. For professionals, there was a different version of the undermining of the former Italian ship "Giulio Cesare", which became after the transfer to the Soviet fleet "Novorossiysk": combat swimmers from the undifferentiated after the war sabotage flotilla of Prince Borghese. The final act of the Commission spoke of this carefully - “the possibility of sabotage is not excluded.” 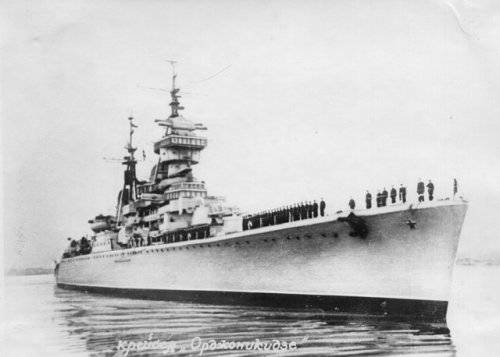 As such "random" explosions occur in the sea, the royal fleet experienced the hard way in the years of the very recent World War II then. The memory of those losses and the experience of such diversions were still very fresh. Just at that time - in the 1955 year - the memoirs of the “black prince” came out, in which he very frankly spoke about the exploits of his subordinates - the frog people. Here is just one episode of their "work" in the neutral Turkish port of Alexandrette:

"In the evening, when the observation of English agents, diligent, but not particularly shrewd, weakened, Ferraro and Roccardi lingered on the beach longer than usual. An exciting party to the balls made them forget that the time was already late. When they were alone, Ferraro entered the bathing a cabin and began to rummage in a box with sports equipment.After a while he came out dressed in a black rubber suit, had flippers on his feet, and a mask (respirator) on his face. Two strange, apparently heavy objects were hung on his belt. attached puh ok algae. This diplomat behaved strangely on the beach!

A man in a black suit cautiously approached the sea, entered the water and immediately, without a sound, disappeared without a trace in the darkness of the night. Floating 2300 m, he was near the Greek ship "Orion" (7000 t), loaded with chrome. Here he performed a maneuver, which he repeated many times during training sessions: under the rays of searchlights, in front of the watch, he slowly approached the vessel, trying to keep in the shadow of the barges standing at the side, turned on the oxygen device and silently plunged. Moving under the water along the hull of the ship, he found the side keel and, having detached subversive charges from the belt, attached them with clamps to the keel. Then he pulled the safety check and came back to the surface. All this is done in a few minutes. He walked away just as carefully. At 4 in the morning, Ferraro returned to the consulate.

After 6 days, Orion, having finished loading, went out to sea, but did not manage to go far: an explosion occurred in the Syrian waters under the hull of a heavily laden ship, and it quickly went to the bottom. The surviving sailors, who were placed in a hospital in Alexandretta, claimed that Orion was torpedoed. "

Italians put mines with turntables. Such a mine could “doze” as long as necessary, but as soon as the ship began to move, a small propeller rotated the flow of water, and after a few hours the released detonator worked ...

Someone else, and Captain Crabbe, like no one else, knew the tricks of Italian underwater saboteurs. Throughout the war, he fought against them, guarding the internal raid of the British naval base in Gibraltar. Who else but he had to go to a dangerous enterprise under the bottom of the Soviet cruiser. And he went. And he never returned alive ... The fact is that after the explosion of the Novorossiysk, all Soviet ships began to carry special PDSS watches (anti-sabotage forces and means). These watches also swept on the cruiser Ordzhonikidze. The instruction demanded that the sentinel, who noticed the alien diver at the ship’s side, shoot without warning — to kill. If you do not have time, then you need to throw special stunning grenades into the water. But in foreign ports it was categorically forbidden not only to use any weapon, but even even to lower their scuba divers overboard without the consent of the port authorities. There remained only one means for the cruiser commander - to turn the propellers. Huge sharp blades cut not only the water column ...

In the years of the recent war, Igor Kurchatov wore a fleet jacket. In the belligerent Sevastopol, he and other physicists solved the problem of degaussing ships, and did everything so that their steel bodies did not cause explosions of German electromagnetic mines. In memory of these works in Sevastopol stands a modest stela in the form of a U-shaped magnet. In the same years, Lieutenant Crabbe fought with Italian saboteurs in Gibraltar. In that great and cruel war, Kurchatov and Crabbe were allies. But in the war after the war - cold, they became, alas, opponents. Crabb wanted to save his country from the Soviet nuclear threat. Kurchatov protected his homeland from nuclear strikes of the opposing bloc. Not knowing each other personally, they came together in Portsmouth, their fates clouded in one fatal point - the anchor point of the cruiser Ordzhonikidze.

Kurchatov's jacket is kept in the State Historical Museum on Red Square. Captain Crabb's uniform is stored in the Portsmouth Museum of the Royal Navy.
Ctrl Enter

We are in Yandex Zen
Nuclear energy tamer
Battle of Berlin Unknown War
7 comments
Information
Dear reader, to leave comments on the publication, you must to register.