12 September 2017
11
It cannot be said that the BRICS summit in Xiamen caused a lot of noise in the world press. Summit topics were predictable. On the other hand, some analysts declared the summit a sensation. For several years, Western experts have been predicting the decay and collapse of the top five BRICS states, but instead there has been a “BRICS plus” trend! 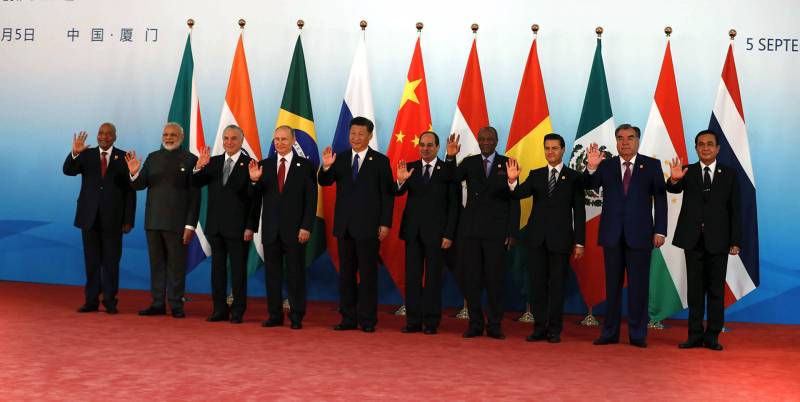 The “threshold” of the summit was the friction between India and China (we wrote about this at "IN"). Border clashes, including throwing stones, could lead to an armed clash. On the other hand, India and China agreed to "speedily" withdraw troops in Doklam. This conditional peace on the border came after more than two months of confrontation. The BRICS platform is one of the formats that India and China can use to alleviate tense border relations and a temporary settlement of the problem, “smoldering” because of a territorial dispute. Meetings at the international level serve the cause of peace and contribute to the rapprochement and development of bilateral contacts.

The second issue, "aggravated" on the eve of the summit, was the test of the hydrogen bomb, conducted by the DPRK 3 September. In the Ministry of Foreign Affairs of Russia expressed their “Concern”: “We express our deep concern in connection with the testing of a“ thermonuclear explosive device for an intercontinental ballistic missile ”announced by the DPRK on September 3. According to the Ministry of Foreign Affairs, "the next demonstrative disregard for Pyongyang of the requirements of the relevant UN Security Council resolutions and the norms of international law deserves the strongest condemnation."

Another member of the BRICS, China, also strongly condemned the actions of the DPRK, which had tested the hydrogen bomb. “Despite the overwhelming opinion of the international community, the DPRK once again conducted nuclear tests. The Chinese government expresses its categorical protest on this, "- noted in a statement to the Chinese Foreign Ministry.

At the BRICS level, North Korean actions were also condemned. In the final declaration of the summit, the leaders of the top five countries stated: “We strongly condemn the nuclear test conducted by the DPRK. We express deep concern over the unrelenting tensions around the long-standing nuclear issue on the Korean Peninsula and stress that it can be resolved only by peaceful means and through direct dialogue of all interested parties. ”

Considering that the unification of BRICS today does not play a significant role in politics and economics is a little cunning. Together five states produce 23% of gross national product from world, and ten years ago produced only 12%. Grow almost double! The total turnover of five countries a decade ago was 11% of the global, and now increased to 16%.

True, between the five countries there is a serious imbalance in the "contribution" to world GDP. The expert of the Institute of International Trade and Economic Cooperation under the Ministry of Commerce of the PRC, Zhang Jianping, says on this occasion that the primary task for BRICS is to get rid of the share imbalance in their total GDP and commodity turnover in relation to global indicators.

By the way, the population of Brazil, Russia, India, China and South Africa is 42% of the total population of the Earth. To ignore such a power is ridiculous.

However, we should note that it is not so easy to live in a world of economic and political competition: the summit participants therefore discussed the pressing issue of changes in the rules of the global economy and the problems of the existing unjust world order dictated by developed western states.

Among others, the question was raised about US dollars, which serve as both domestic and key currency, playing a major role in world trade, especially oil. The summit participants, however, came to nothing: none of the participants of the BRICS said about the refusal of the dollar. There can be no talk of total refusal even in internal calculations between the five countries. The only thing we can talk about is the increase in the share of the national currency of the BRICS countries in trade among themselves.

At the summit, economic sanctions practiced by developed countries were condemned. Chinese leader Xi Jinping сказалthat states with new markets and developing countries should gain greater representation in the world system: “It is necessary to make efforts to increase the representation and voice of new countries and developing countries in the system of global economic governance, to promote and form more equitable and rational international economic order. "

At a press conference following the BRICS summit, President Vladimir Putin gave a high assessment to the meeting. “I will remind you, - сказал the leader of Russia - that BRICS was developing, in fact, at the initiative of Russia in its time, in 2005, when we first gathered at the same table representatives of the People’s Republic of China, India and with our participation. This is how the “troika” first arose, and then the “five”. V. Putin estimated this current “top five” as a “very promising union”:

“This is a very promising association, without any doubts, which is not going for some ideological principles, but because of the presence of a number of coinciding interests.

And above all, this is connected with the structure of the economy and with our common desire to give the world economy a more just and noble character, so to speak. ”

V. Putin recalled that the New Development Bank is already working, and Russia is beginning to receive funding for some projects: for example, on water treatment of the Volga Basin and development of the judicial system (this includes building construction and computerization of the system). There are also smaller projects.

The president also noted that the “reserve currency pool” is starting to work. In general, according to the Russian leader, it was “a successful summit, including with the participation of leaders of“ outreach ”countries, those states that represent emerging markets from various regions of the world.”

Pepe Escobar, whose article appeared in the newspaper Asia Times, believes that the summit in Xiamen caused a sensation - downright BRICS "bomb"!

“A real bomb” is a well-known analyst who considers V. Putin’s opinion: the leader of Russia adheres to the concept of a “just multipolar world,” in which oil contracts could bypass the US dollar. Oil could be sold for yuan or gold.

The analyst announces “RC” as the current core of BRICS: Russia and China, which adhere to “strategic partnership”. Their role is visible everywhere.

Pepe Escobar recalls Pyongyang’s sixth nuclear test. And the “RC” proposal here consists in the initiative of “double freezing”: to freeze the military exercises of the USA - Japan - South Korea; freeze North Korea’s nuclear program; followed by diplomacy. But the White House instead initiated the theme of its “nuclear potential” as a conflict resolution mechanism!

As for the dispute between India and China in the Doklam area, both sides “after two months of tension” decided to “promptly withdraw” the border troops. And this decision, the analyst is sure, “was directly connected with the approaching BRICS summit.”

On the world stage, BRICS is a “serious nuisance” for a unipolar world order, Escobar believes. Comrade Xi delicately remarked in Xiamen that "we, the five countries, should play a more active role in global governance." And then Beijing presented a “conceptualization” for the expansion of partnership and cooperation. In Xiamen, proposals were made to launch a “dialogue” with Mexico, Egypt, Thailand, Guinea and Tajikistan. These countries are included in the block "BRICS-plus", and rapprochement with them is "part of the road map."

Another example of "BRICS-plus" Escobar saw in the possible launch before the end of the year of the Regional Comprehensive Economic Partnership (RCEP). In this partnership, by the way, China is “not leading.” But then there are Japan, India and Australia - along with 10 members of ASEAN.

Patrick Bond from Johannesburg says that “centrifugal economic forces” are destroying BRICS: overproduction, excessive public debts and “de-globalization” are the obstacles. The critic interprets this process as a “fiasco of centripetal capitalism”, whose ideas are put into practice by Comrade Xi. Escobar does not agree with this: the strength of Chinese centripetal capitalism cannot be underestimated!

According to Escobar, the concept of a multilateral order of Xi and Putin is "clearly visible" from the widespread Xiamen Declaration. V. Putin notes that Russia shares the concern of the BRICS countries about the injustice of the global financial and economic architecture, which “does not take into account the growing weight of emerging market countries”, and therefore Moscow is ready to work together with its partners “in order to facilitate reforms of international financial regulation and overcoming the excessive dominance of a limited number of reserve currencies. ” Overcoming such domination Escobar finds “in a political way” to state what BRICS has been discussing for many years: how to circumvent the US dollar (petrodollar) in calculations.

And Beijing is ready to step up this game! Soon, China "will launch a contract on crude oil futures for yuan convertible into gold," writes the analyst. The move is “win-win”, because the yuan will be fully converted into gold on both Shanghai and Hong Kong exchanges.

The new triad of oil, yuan and gold is a “win-win”, Escobar rejoices. The main thing here is a dollar bypass. And “RC” through the Central Bank of Russia and the People’s Bank of China “have long been developing ruble-yuan swaps”.

And as soon as such an order of trade “goes beyond BRICS”, first mastering “BRICS-plus” and then going further, “Washington’s reaction will be nuclear (I hope, not literally),” the analyst sneers.

If, we note, Escobar’s optimistic forecasts came true, Washington’s hawks would have been very disappointed. The decline in the role of the dollar in international settlements, especially in the oil trade, would really historical event. It’s too early to talk about something like this. Forty-two percent of the world's population has not yet created a new world order.

By the way, experts they say about the decline in the share of the total population of the BRICS countries. By 2025, this share in the world's population will decrease to 41%, and by 2050, to 36%. However, these are only forecasts.