By train, by bus ... in your arms. Saakashvili's Adventures 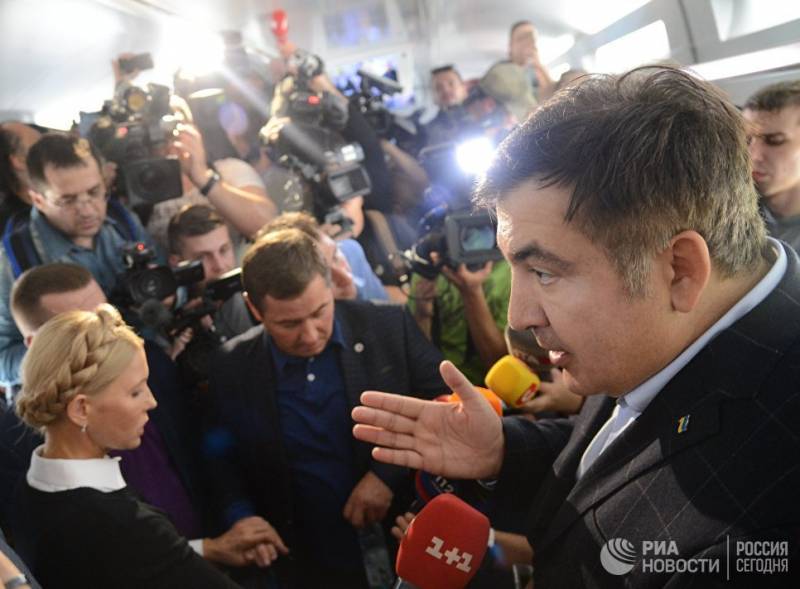 ... And I remembered the comedy "Airplane, train, car", the hero of which had to run from one mode of transport to another, before he got to Chicago. Similarly, our “hera” made his way to Ukraine, either by train, or by bus, and eventually got where he wanted — in the hands of his supporters.

Well, Mishiko Saakashvili has a lot of experience in border violations. A few months after he came to power (with the help of the “color revolution” and with the support of the United States), he famously demolished a border checkpoint at the border that divided Georgia and Ajaria. Thus, he abolished the Ajarian autonomy.

But not always he was successful.

In the memorable August 2008, he no less famously “crossed the Rubicon” and started the war against South Ossetia, and at the same time - against the Russian peacekeepers. But this time it came out almost from a famous song about the unlucky king: “I lost the war, I lost half my legs, but I was glad to tears that I stayed alive". Of course, this gentleman did not lose half his legs, but he still chewed on his tie from emotional experiences.

Yes, and his army weakened seriously - at least, he made no more attempts to make war with South Ossetia, Abkhazia and Russia. I confined myself to individual Russophobic demarches and friendship with “nebratyami” - in particular, Mr. Poroshenko. For this friendship, he even managed to obtain the citizenship of Ukraine and the dust-free post of governor of the Odessa region.

Only now there was no friendship: something went wrong. And Odessa rejected a stranger, and in the higher echelons of the Maidan junta, Mishiko did not get accustomed, with his wild temper. 26 of July of this year Poroshenko deprived Saakashvili of his Ukrainian citizenship. From this began the adventures of Saakashvili, an exile in Poland-Lithuania-Hungary. And all this time he kept saying that he would return to Square and would defend “his rights”.

10 September came the culmination of this adventure comedy. On the eve of Saakashvili said in his blog that he intends to go: "Everything, we go to Krakovets, Ukraine." He moved from Poland towards the border with Ukraine, accompanied by a “support group” - deputies of the Verkhovna Rada and the so-called “social activists”.

For their part, the Ukrainian border guards reinforced the protection of the Krakovets checkpoint and said that they would take away the passport from the stranger (which is invalid after Saakashvili lost his citizenship).

Already in 6 in the morning of September 10, a group of supporters of the “unfortunate exile” began to gather at this border point. Opponents, among whom there was a participant in the scandalous movement “Femen,” who gave a spicy note to Mishiko’s meeting, also pulled up there. A clash broke out between supporters and opponents: fans of the scandalous ex-president and ex-governor called their opponents ... "titushki" (and not so long ago, many of these people jumped together on the same Maidan). The border guards had to close the checkpoint for all cars.

Saakashvili, feeling that through the "Krakovets" he would not just break through, decided to take a train going from Polish Przemyshl through Lviv to Kiev. By that time, he had secured strong support from the “lady with a scythe” - Yulia Tymoshenko.

But with this type of transport got bad luck: the train stopped. Speakerphone Mr. Saakashvili was asked to leave: as a person who does not have the right to travel to Ukraine. Unfortunately, as a result, it was not the impudent passenger who had to get out, and the rest, those who had nothing to do with him. Well, you can only sincerely sympathize with those simple citizens who had to undergo undeserved inconveniences and get on the chaise.

After advising on “violation of European law” and threatening to go to the police, Mishiko took the bus. On it, he reached the border point "Shegeni". This time the Polish side politely missed him (probably, there was a sigh of relief here). They only recalled that he might have problems on the Ukrainian side.

But these problems were overcome famously, in full accordance with the style inherent in Saakashvili. Mishiko fell on the territory of the Square in the hands of his supporters. And it seemed to him special forces there ... with Soviet symbolism. Although where did she come from? There, long ago, they are simply obsessed with decommunization. Probably, this statement was made by a famous tie for their masters, in order to show himself (the old fashioned way) also as a fighter against the Soviet threat.

Here of course a natural question arises: what kind of state is it that its border can so easily cross a doubtful face on the shoulders of a raging crowd? What are all the statements of the Ukrainian leadership about “containment of Russia”, if it cannot contain a handful of those who are used to solving all the problems using methods of Independence? And what kind of “gidnosti” (dignity) can we talk about if the state has put a person in an uncomfortable position, who has long been “written off into circulation”?

There can be only one answer: this became possible only because Mr. Saakashvili and Mr. Poroshenko have the same owner. To take serious measures against the violator of the state border Poroshenko cannot, for fear of incurring the wrath of this very owner.

As a result, the confrontation was just a comedy played out. The end of which we still have to watch. It will soon become clear whether the rowdy will succeed in gaining a foothold on the territory of Ukraine (which would mean, at a minimum, a serious undermining of Poroshenko’s authority), or the Kiev pseudo-government will find a way to respond to such a shameless violation of the sovereignty of the state for which she allegedly plays.

It remains to add that the hero of the comedy film "Airplane, train, car" after all, after a lot of transfers and adventures, got to the house. But where is Mishiko's house now? At least, on the site “Peacemaker”, where he (to the insult of all the “quilted jackets”) was rushed to enter, - in the column “Residence” it is indicated “Homeless”.

... And somewhere, probably, a citizen of Ukraine sighed heavily and (despite all his flaws) its legitimate president, Viktor Yanukovych. And he asks in surprise: “Well, was it possible?”