Russia as an aggressor: who is next for conquest?

11 September 2017
88
Breathtakingly many cries and critics of Russia as a world aggressor. Some people go straight into hysteria about the fact that tomorrow (as a last resort the day after tomorrow) will be occupied by Russian troops rushing across the border. 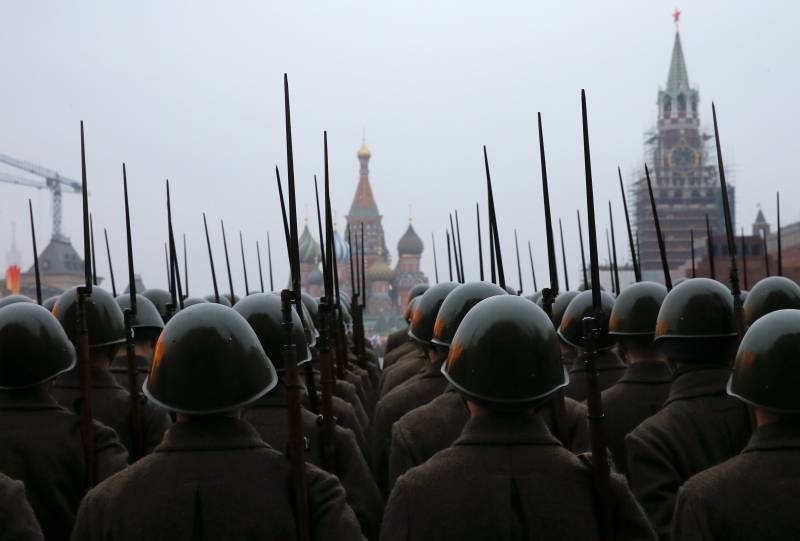 Strange, but literally about ten years ago there was nothing of the kind. Howl began when? It’s right when Putin and all of Russia “burned” with him in the Crimea. When it suddenly became clear that we have a MTR. Then, just as suddenly, it turned out that there tank troops, artillery and, finally, VKS. But this is another история. Syrian

If you look at what we are imputed to, then we get two very remarkable lists.

Everything is very, very controversial, but in the West nobody cares.

Second. This is the most interesting. Who shouts the most about a possible war / occupation?

Ukraine, Lithuania, Latvia. Plus, some kind of aggravation in Belarus on the topic of the fact that under the guise of exercises, Russia can arrange an annexation. And yes, tarahteniye in Georgia about the "08.08.08".

And let's look a little more globally, from a historical point of view. In one of the articles I already wrote about the territories that had been slaughtered by the USSR, which, to my surprise, caused malice from the Bulgarians. Well, now, indeed, God is with them, with the territories (not really, of course), we will look at more weighty things. On independence and statehood.

If we take for granted that Russia is an eternal aggressor, then very surprising things turn out.

Here is another list, so as to refresh your memory. I may not be entirely accurate in terms of chronological order, but this will be clear at the end.

Finland.
Twice received from Russia. Before 1809, it was just a part of Sweden, if in fact it did not become a state, it gained autonomy and Finnish as a state language. Well, absolutely independence came in 1918.

Poland.
I restored my independence with the help of Russia twice, in the same year 1918 and 1944. It is worth noting that the very partition of Poland in the 1939 year is temporary. For after the war, the Poles received 2 / 3 East Prussia, the city of Gdansk (Danzig, which was not Polish by any means). Well, the little things on the borders with the USSR.

Bulgaria.
As an independent state was revived as a result of the victory of Russia in the Russian-Turkish war of 1877-1878. Let not in the whole territory, however. Despite the fact that in two world wars, Bulgaria participated in the anti-Russian coalitions, there was no repression.

Romania.
By the way, she was also born as a result of the Russian-Turkish wars, and became sovereign in 1878, to which Russia, too, did not weakly attach itself, exchanging Bessarabia for Northern Dobrudja with Constanze.

Serbia.
Born all in the same year 1878, as a result of the fact that the appetites of Turkey were strongly moderate by the Russian soldier.

Armenia.
Was in the sphere of interests of Iran and Turkey, and most likely would have died out in the end everything. But the Russians came, hung the Turks, intimidated the rest, and in 1828, they created the Armenian region. Next was the Armenian SSR and since 1991, an independent Armenia.

Azerbaijan.
As a state, it took shape for the first time only in 1918, as part of the USSR. Before that, there were Azerbaijanis, but Azerbaijan was not. Fact. Territories were seized by all and sundry, including Russia after two wars (1813 and 1828) tore a fair amount away from the Persian Khanate.

Georgia.
1774 year, when Russia intervened in the affairs of the Georgians, can be considered the starting point. Undoubtedly, the Georgians showed great teeth in the wars of independence with the Persians, but the prospect was sad. If it were not for the brink of friendly bayonets. And so everything is the same: 1918 and 1991.

Turkmenistan, Kyrgyzstan, Kazakhstan, Mongolia and Moldova they did not have statehood at all and formed it already as part of the USSR.

And, it is worth emphasizing that there are no screamers on the topic of Russia's hostility in this five, quite the contrary. The exception is Moldova, well, it is already up to them to decide whether to go to Romania or to Russia to stay closer.

Here you can add on Greece, which was actually fought off by the Turks in 1821, Italy, cleared of the French (1799-1800), and with Italy and Poland and Germany, freed from the Germans Austria и Czechoslovakia (1945) Here, in fact, saved from defeat Egypt along with other Arab countries. If someone is sure that the Arabs got out, then I have no doubt that Israel would have crushed them, no.

Germany.
Here it is. The fact that Germany generally remained on the map, even if in the form of two republics, is a separate merit of the USSR in the person of Stalin and Molotov. For the allies were not very eager to save Germany as an independent country. Maximum - protectorate. Well, in the unification of Germany in 1990, too, as if the merit of the USSR.

Now "for a snack" today's flashy.

Lithuania.
It is more interesting here, if only because they shout the loudest. The state of Lithuania was in the form of the Grand Duchy of Lithuania, but ended in 1569 with the union with Poland in the Polish-Lithuanian Commonwealth. Then there was a decline, and in the 1772, 1793 and 1795 years, Rzeczpospolita was successfully divided between Russia, Prussia and Austria.

Finally, the Lithuanian SSR was formed in 1940 year. In addition to the German Memel / Klaipeda and Vilnius / Vilna, Lithuania was killed by another part of the territory of Belarus. Well, in 1991, Lithuania became an independent state.

Ukraine.
The common history says that the first Ukrainian state in this territory was the Ukrainian SSR in 1919. Before that, after the abolition of the Hetmanate of Catherine II (1764 year) and the Zaporizhzhya Sich (1775 year), it was the land of Russia.

Belarus.
Belarusians also left from one state to another as a province. And it can also be said that Belarus gained its statehood in the 1920 year, with the final creation of the BSSR.

An interesting picture is obtained and funny at the same time. Yes, by and large Russia / USSR has put its hands on the creation of many states. Angola, Mozambique, Cuba, Algeria, Vietnam, the list is quite long.

We have repeatedly said that these "occupation" were strange. And they didn’t carry with them destruction, as in the performance of the same Germans, but creation.

So why so many screams from the "former"? Why are they so afraid of this very occupation and annexation?

Apparently, the fact is that in those countries this occupation is simply desirable. We exclude Belarus, it’s hard there, but not so much as to dream of Russia’s occupation. Therefore, individual cries that "we will be captured and enslaved tomorrow" - this is so ... verification.

One gets the confidence that in the Baltic States really want Russia to occupy them. Well, rushing out from under the pots on their heads in Ukraine is also somewhat similar in meaning.

The key word here is Crimea.

And the roads were drawn, and the problems began to be solved, and created by those who, in principle, should not create them. This is me about water, electricity ... Energy bridge, just a bridge ... You can talk about the pros for a long time. Well, plus - an opportunity to earn extra money on it.

So all these “concerns” and “fears” of occupation look somehow more and more like a plaintive appeal: “Well, occupy us, finally!” They give less and less money ... for independence.

And so - it would be good, right? The revived ports and terminals of the Baltic states, a sudden returning market for these ... smoked fish, tourists, again ... Remains demanded (and some quite real) remains of the military-industrial complex of Ukraine ...

Maybe, really, they all want us to “occupy them like the Crimea”? Maybe our “aggression” is the path to development?

Yes, historically the results of the “aggressions” of Russia / USSR: half of Europe and part of Asia received statehood and, moreover, such a good impetus in development.

The whole history of Russia suggests that it helped in every way the creation of a multipolar world in any era. And very often, unfortunately, at the same time sacrificed their own interests as the state, and its population. This is also a fact that you will not dismiss.

And it would be quite possible to create an empire that the British would envy. But, alas, the Russian approach is somewhat different.

So there is not even "in line", but rather "do not wait."

Also, by the way, historically true.