112 years ago the Peace of Portsmouth was made 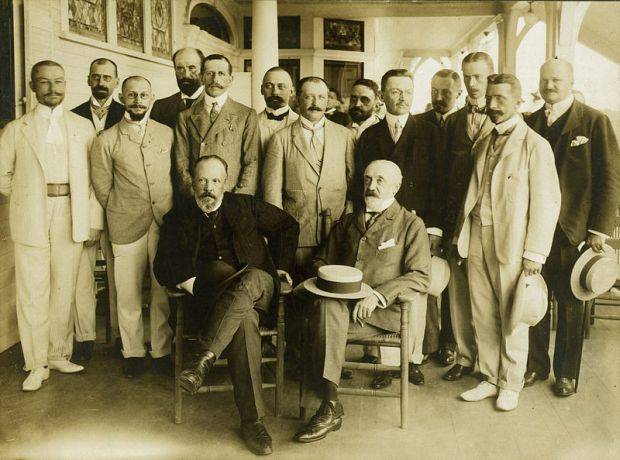 
Once again retell history Russian-Japanese war does not make sense, we note only that it turned into an unprecedented shame for Russia, because for the first time in several centuries, the country lost part of the territory and paid a contribution to the winners.
It was not by chance that after signing it, the Petersburg wits began to call S. Witte, who signed the treaty, “Count Polusakhalinsky”. Although Witte just need to say thank you for the fact that he managed to return to Russia at least the northern part of Sakhalin completely occupied by the Japanese.

The firm position of Witte allowed Russia to save face in the matter of paying indemnity, which was not formally paid, but was disguised in the form of payments for the maintenance of Russian prisoners by the Japanese 70 000.

Evaluating the agreement signed in Portsmouth, we can say that, in general, S. Witte and the Russian ambassador to the US R. Rosen concluded a very profitable world for Russia, especially taking into account the realities that had happened by the autumn of 1905. Indeed, besides the southern part of Sakhalin, the Japanese could only bargain for the right to fish in Russian territorial waters.

The Japanese army left Manchuria, Russia didn’t protect its protectorate over Korea, and no one in the world was going to dispute, and the loss of Port-Arthur and Dalny in China was not considered a special loss, since after the lease period these cities still had to would return to the Chinese.

After the war, many historians for some reason wrote a lot and tirelessly that Japan was exhausted by the war, and the Japanese emperor was asleep and saw how to make peace with Russia as soon as possible. Of course, the war is expensive, and the Japanese did not continue economically to continue it. But Japan was going to conclude peace not because it was exhausted by the burden of military spending, but because the continuation of the war simply did not make sense to it.

Japan achieved all its goals and even exceeded the original plan, occupying Sakhalin. Japan removed the Russian rival and rival in the region, destroyed the Russian fleet, received Port Arthur and Dalny and, most surprisingly, managed to inflict a series of defeats on the Russian army. What the Japanese, and all the others, did not count at all.

And if the victory of the Japanese fleet over Russian as a whole was allowed, then on land the Japanese counted on very modest successes. But it turned out that the Japanese army could operate almost as effectively as the fleet. What was a pleasant surprise for the Japanese, and an ice shower for the Russian army. Because no casualties were expected on land, and even from the Japanese. Both Japan itself and its allies, who gave very pessimistic forecasts on the eve of the war.

But it turned out that the Nikolaev "generals" of the type of Kuropatkin and Stoessel are only able to retreat and lose battles, even surpassing the enemy in numbers. And about the pseudo-admirals of the type of Rozhestvensky there is nothing to say.

"The war revealed the complete unsuitability of the fleet, its materiel and personnel, and in the land army a number of deep flaws: lack of knowledge, arbitrariness and bureaucratic formalism of the highest ranks, and at the same time the depression of ordinary officers, devoid of training, initiative" (V. Klyuchevsky ). And there is nothing to add to this, everything was really so, if not worse.

But the fact remains that at the end of the summer of 1905, Japan was simply banal to fight for. And there is nobody with it, considering the defeat of the Russian fleet and the passive Russian army, retreating farther and farther into the depths of Manchuria. So the continuation of the war has lost all meaning.

All the same applied to Russia. Having lost Port Arthur and left without a fleet, Russia could have ended the war with some successes on land. But this was not the desire of the top political leadership, the belligerent army, and the rest of the country's population, who simply did not understand why Russian soldiers and sailors were dying somewhere on the edge of the world.

In addition, do not forget about the revolutionary situation. So when Nicholas II learned about the Japanese conditions for making peace passed through the Americans, he did not think long, and soon S. Witte went to Portsmouth to sign a peace treaty. 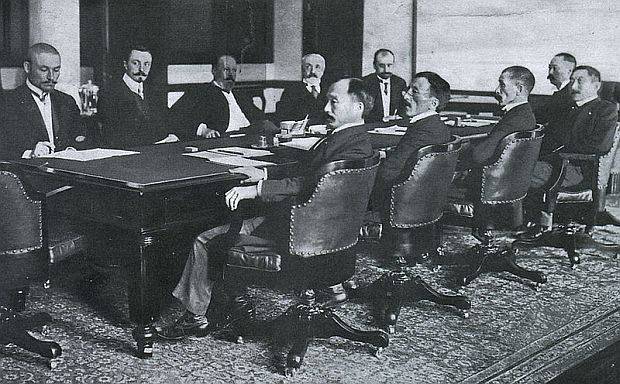 From left to right: from the Russian side (the far side of the table) —G.A. Plsson, K.D. Nabokov, S.Yu. Vitte, R.R. Rosen, I.Ya. Korostovets; from the Japanese side (the near part of the table) -Adati (German), Otiai, Komura (Eng.), Takahira (Eng.), Sato (Jap.). Rosen. Photo from wikimedia.org

Of course, all the blame for the defeat in the war was laid on Emperor Nicholas II, and after Portsmouth only lazy did not scold him with the last words.

The same S. Witte in a somewhat veiled form described the outcome of the war as follows: “It is morally difficult to be a representative of a nation in distress, it is hard to be a representative of a great military power of Russia, so terribly and so stupidly broken! Not the Japanese were defeated by the Japanese, not by the Russian army, but by our orders, or more correctly, our boyish management of 140 to a million people in recent years. ”

It is not necessary to be able to read between the lines in order to understand to whom specifically Witte places the blame for the defeat, mentioning boyish management. More precisely, V.I. Lenin, describing the defeat as "the complete military collapse of autocracy."

It would be very interesting to know the reaction to the signing of the Portsmouth Treaty of Nicholas II himself, but in his diaries there is not a word about it.

5 September 1905 of the year he wrote in his diary the following: “In the first pen, I killed the hen, in the second Birilev - the fox and the hare ... The sun just burned. After sunset there was a small fireworks display for children. After lunch, read.

September 6: “Today is a perfect day ... At 2, we went to the eastern side of the bay at the Patrol Station and consistently took two islands in a raid, but with no result, although there were several black grouse ... We drank tea on the last island.”

The same thing in the following days.

About Portsmouth there is not even the slightest mention, although there officially, on paper and with the signatures of high-ranking officials, the shame of Russia was perpetuated, which for the first time in several centuries lost part of its territory and agreed to disguised contribution.

And the emperor, famous for his piety, not only does not find a place for himself, experiencing defeat in the war and does not pray for all the dead, but drives tea and arranges raids on black grouses on an "ideal day." Although the day is not perfect, but black.

This behavior of the “owner of the Russian land” is very difficult to explain, even from purely human positions. After all, what an adequate host would indulge in idle pastime and chasing tea when he was chopped off a piece of land? Yes, almost 400 000 subjects either did not return from the war at all, or returned with injuries. Although if we recall the “boyish management” and how the crown prince Nicky threw cones at his cousin on the day of the death of Emperor Alexander III, then there is nothing surprising in that.

The Russian-Japanese war may seem insignificant to someone and has not had a noticeable influence on the course of world history, but this is not so. If its outcome was completely different, then surely for the same Nicholas II everything would not have ended in the basement of the Ipatiev house. Surely Pearl Harbor and now would be a sleepy, quiet, resort town, and Hiroshima and Nagasaki would not have survived the horror of nuclear bombardment.

The leader of the world proletariat, Vladimir Ulyanov, would have lived his life in Switzerland or France and would not push fiery speeches from an armored car in 1917, while political prisoner Joseph Dzhugashvili would quietly die in another link and never become the “father of nations”, the great Stalin.

Perhaps the shots in Sarajevo in the summer of 1914 would have remained a shallow incident, which everyone would soon forget, and looking at how Russia defeated Japan in Manchuria, the future Fuhrer of the German people, Adolf Schicklgruber, would not say that Russia clay feet ”and there would not be a black June day of 1941 in our history.

But, alas, history does not know the subjunctive mood ...