The decisive battle of the First World War. East Prussian operation 1914 of the year. About losses. CH 2. 8 Army

11 September 2017
5
Consider the total loss of German troops.
During the first clashes and battles with the troops of the 1 Army, the German cavalry with the support of infantry units 23-29 in July 1914 lost (Verzhbolovo, Shmaleninken-Eidkunen, Marunsken) killed, wounded and captured to 500 people [Rogvold V. Decree. cit. C. 22; Collection of documents. C. 111; Vatsetis I.I. Fighting in East Prussia. C. 25], another 218 man and 2 guns were lost during the Kaushen 2-th Landwehr Brigade, and before 1500 a man lost the 1-i Army Corps in the battle of Stallupenin.

Such was the result of the 1 th victory of the Russian troops and the Entente in the First World War. Eyewitnesses recalled how the regiments of the McKen's corps, formed from the Prussians, went on the offensive as in a parade - not paying attention to the deadly fire of the 27 artillery brigade. And then, in order to support his overbearing infantry, the German artillery made a courageous act - a whole division, helping its infantry during critical moments of the battle, stood in an open position - only 1000 steps away from the Russians. As a result, the German division was destroyed - and its 12 guns became a valuable trophy of the 27 Infantry Division.

The document noted how the German infantry - a column led by officers - went on the offensive, having fallen under the influence of 14 Russian machine guns, which opened fire over the heads of their infantry. The machine gunners and the battery of the 3 division of the mortar battalion exterminated this convoy in 5 minutes, laying down the 1500 man [Radus - Zenkovich L. Decree. cit. C. 63]. Moreover, some German regiments lost all officers and non-commissioned officers and more than two thirds of the rank and file [Collection of documents. C. 212].

The Germans suffered heavy losses while fighting against units of the 2 Army.
During the unsuccessful battle for Orlau with the Germans of the 15 Army Corps, the German 37 Infantry Division, which was on the left flank of the 20 Army Corps, was crushed [Evseev N. Decree. cit. C. 103]. According to N. Yevseyev, the losses of the German units killed and wounded were as follows: the 1 th Jaeger Battalion - 16 officers and 254 privates; 151 Infantry Regiment - 16 officers and 380 soldiers; battalion 146 Infantry Regiment - 34 soldier; The 147 Infantry Regiment suffered the most (some of its companies lost their 150 fighters). According to incomplete information, the 75-I infantry brigade lost more than 300 people. From the 73 Infantry Brigade, Russians buried 587 people on the battlefield. The 29 Infantry Regiment of the Chernigov Regiment buried around 600 German soldiers and officers, picking up more than 800 wounded.

In general, the losses of the Germans (20-th Army Corps and 70-I Land Brigade) 10-11 in August at Orlau-Frankenau were killed at least 1000 people and wounded before 3000 people (most of them fell into Russian hands) [Ibid]. 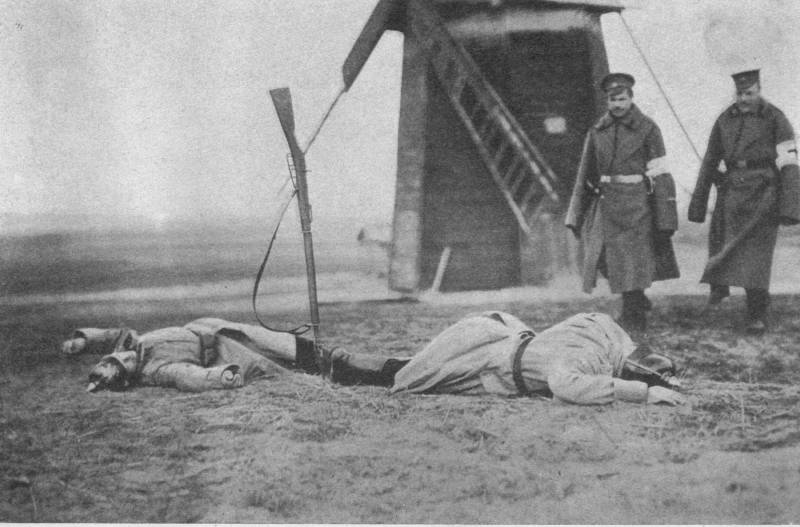 The loss of 15 August units of the same 41 division at Waplitz was great. An eyewitness recalled the terrible action of the Russian artillery fire, after which the mountains of the dead and wounded remained. He counted only wounded Germans at the edge of the 300-400 forest. A convoy of prisoners from 600 to 700 gathered on the highway, the second being already (the first was 800 prisoners). All this testified to the defeat of the German brigade. [Zhelondkovskiy V.E. Memories of Colonel Zhelondkovskiy about participation in the actions of the XV Corps during the operation of the army of General Samsonov // Military Collection. Belgrade. 1926. Prince 7. C. 294].

Total losses of the 41 Division at Waplitz - 2400 soldiers and officers and 13 guns [Reichsarchiv. Der Weltkrieg 1914 - 1918. Bd. 2. S. 187]. A German source described how German troops had to break through a throat wide 2,5 km - suffering heavy losses. The 41 Division lost two thirds of its combat strength - from among those who survived the previous battles, and after Vaplic, the remnants of the division lost any combat significance. The gunners also got it: the 35 and 79 artillery regiments lost 61 people.

On August 15, in the Mühlen area, the Unger division launched several unsuccessful attacks, repelled by the Russian 6 Infantry Division, with heavy casualties for the Germans. [Temples F. Decree. cit. C. 55].

At Vaplitsa and Mühlen the Russians captured many prisoners. [General N. N. Martos referred to the number of officers captured by Waplitz — 18 officers and more than 1000 soldiers. Golovin N.N. Iz stories 1914 campaigns on the Russian front. The beginning of the war and operations in East Prussia. C. 273. In A. Kersnovsky, the number increases to 1400 people - indicating that this is the total number of captives in Vaplitsa and Mühlen. Kersnovsky A. A. Decree. cit. T. 3. C. 340. The 30 Infantry Regiment distinguished itself, seized 11 officers and 380 soldiers (Collection of documents. C. 584) and 5 th Infantry Regiment (only 2 Battalion captivated Mühlen to 250 people, and also captured the battery (1 gun was drowned Lake Muhlen, and 3 taken)) (Yu. F. Buchinsky. Decree. Op. C. 29)]. Many heroes were buried at the scene of the battle: N. Evseev wrote about German and 427 Russian soldiers buried near Vaplitsa 159 [Evseev N. Decree. cit. C. 217]. According to others, 59 officer, 22 noncommissioned officer and 42 rank and file (total losses of this German regiment - 703 officers and 28 of the lower ranks) are among the only ones from the 1500 Infantry Regiment (the total losses of the German regiment are among the last - the regimental commander, Colonel Sontag, who soon died from his wounds). The German 152 Infantry Regiment lost 12 officers and 514 lower ranks under Vaplitsy [Bogdanovich P. N. Invasion of East Prussia in August 1914. Memoirs of General Samsonov, an officer of the general staff of the army. Buenos Aires, 1964. C. 167]. 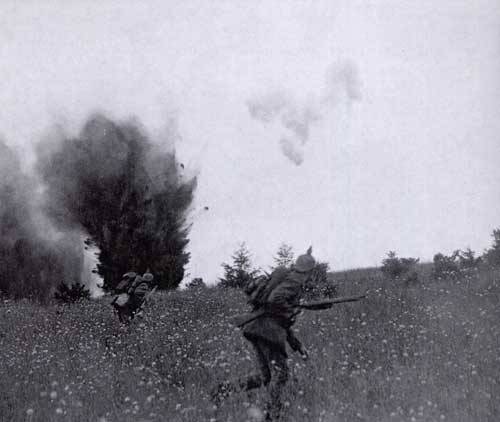 Thus, even before the onset of the main events of Tannenberg, both (37 and 41) divisions of the 20 corps were so shabby that in the further course of the operation they almost did not participate.

In the battle of Allenstein 2000 was captured by the Germans.
Moreover, freeing their captives later on, the Germans often shot at their compatriots, taking them for Russians [Evseev N. Decree. cit. C. 241]. For example, the 5 hussar regiment did not dare to attack in the Cossack regiment that was just barely escorting the captured Germans. He waited for his infantry and artillery, and only then did the German hussars go on the offensive, capturing the Russian field hospital and 100 wounded German prisoners who were treated in it. Still 400 captured Germans were simply thrown by the Russian escort, and returned to their own, having survived before this intensive shooting from their own comrades. An eyewitness cites the contents of a Russian dispatch sent by a non-commissioned officer from vil. Mühlen: 80 soldiers of various companies gathered around, there are no cartridges and officers, and 300 German prisoners are sitting in the shed [Zhelondkovsky V.E. Decree. cit. C. 290].

Even finishing off the surrounded parts of the central group of the 2 Army, the Germans suffered heavy losses. Thus, in the battle under the Adlershorst 17 in August, units of the German 2 Infantry Division fought heavy battles, which caused great losses to both sides. On the same day, a fierce battle between the German 1 Infantry Division and the Russian units, breaking through from the encirclement, occurred between Wallendorf and Mushaken. The infantry of the German 42 regiment went on the attack on the Russian battery, but was shot. Only after the powerful German artillery was put into action was the Russian battery suppressed and then captured, but the Russian infantry withdrew [Evseev N. Decree. cit. C. 265]. And when in a kilometer southeast of places. Malgaofen units of the brigade of the German 1 Infantry Division made a halt, they were hit by the Russian units, losing more than 200 people, including the brigade commander, General F. Trotta. The erupting Russian part dispersed parts of the German brigade — moreover, the German infantrymen exchanged fire for some time between themselves. In this fight from the German side, apart from the general, the 2 battalion commander was killed, and the losses were very large [Reichsarchiv. Der Weltkrieg 1914 - 1918. Bd 2. Berlin, 1925. S. 229]. When the 1 Battalion of the 21 Infantry Regiment later discovered the movement of the Russian units on Canvizen and went on the attack, it was destroyed. It is in the battles at the places mentioned above. Wahlendorf, the Germans left the largest artillery trophy in the course of the operation, the 13 gun, in the hands of parts of the 22 Army Corps breaking out of the encirclement. 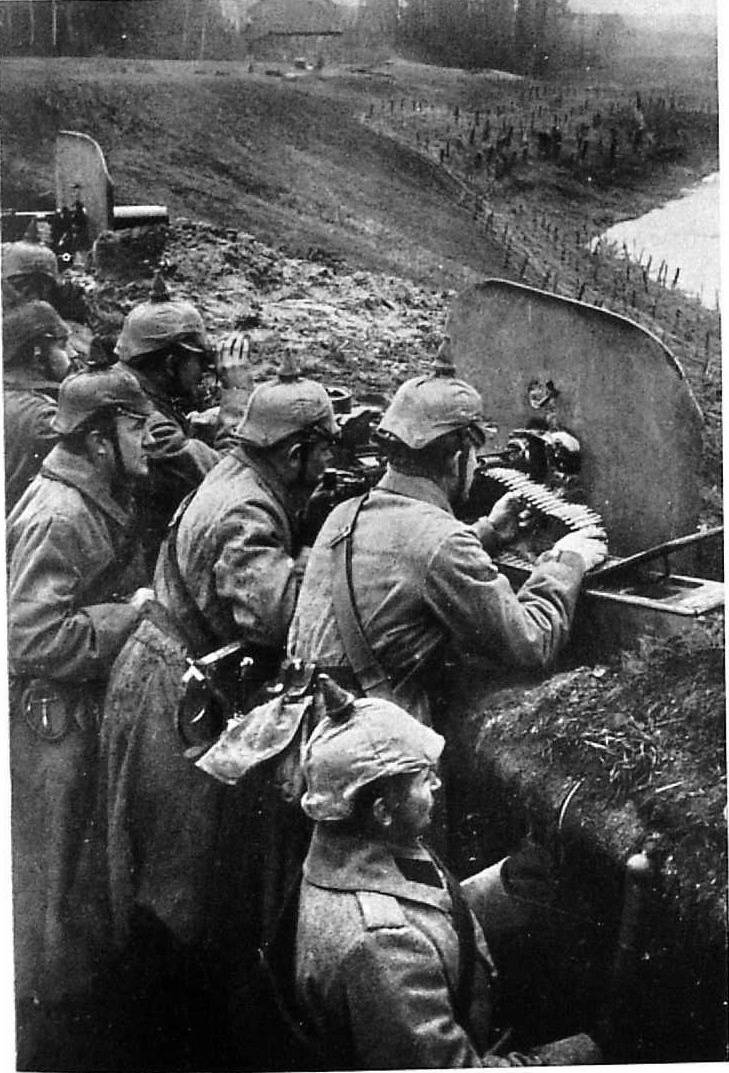 German machine gunners in the battles of the Masurian Lakes.

For the Germans, the most costly were Gumbinnen, "Tannenberg" and the First Battle of the Mazury Lakes. And for the 8 army, which lost 20% of its original composition, the transfer of fresh divisions from France was more than relevant.