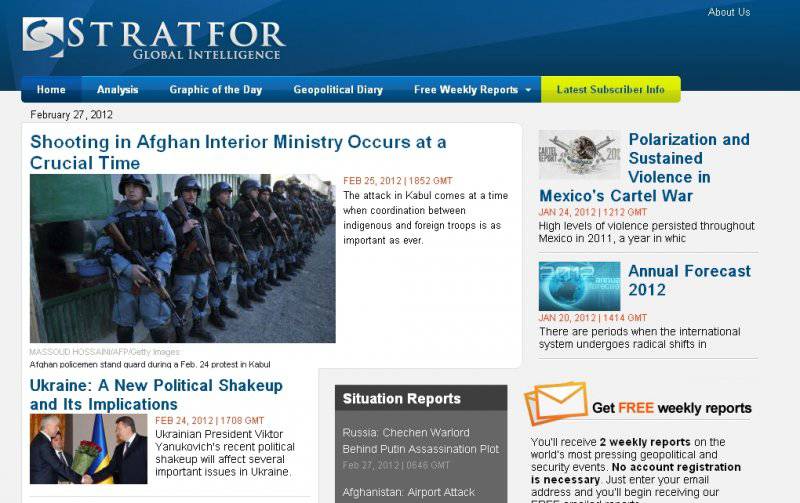 27 February 2012 of the year on the infamous WikiLeaks site began publishing data intended for a narrow circle of people. This time, the secret electronic correspondence of the American private intelligence corporation Stratfor, which in certain circles is better known as the “shadow” or “private” CIA, fell into the hands of Julian Assandzha.

The network has received a huge amount of confidential information, in particular, data on 75 thousands of credit cards with all details (names, addresses, codes), approximately 860 thousands of addresses and names of people who were and are CIA clients, as well as more 200 gigabytes of classified correspondence .

To date, there is a version that the hacking of the server of the corporation was carried out by anarchist hackers who have their own organization. Some experts are inclined to believe that certain anarchists are involved in this, who are united by anti-globalization goals. Recall that in June 2011, hacker activity led to the cracking of the Arizona Department of Public Security's server, and a few days later the sites of the Brazilian government and Petrobras fell.

For quite a long time it was not known on which side the “shadow CIA” works, on what conditions and in whose interests. Before 2011, the name of the corporation was very rarely mentioned in the media, but in the journalistic materials themselves it appeared quite often as a reference to geopolitical topics.

Stratfor Corporation was founded in 1996, and at the very beginning, access to all the information that was posted on the company's website was completely free. The company's management decided that it could take money for the services provided only in 1999, after acquiring the status of a serious intelligence and analytical organization. And this status was a consequence of the launch of the Kosovo Crisis Center program, in which news publications published materials on the real situation in Kosovo. In the same year, the corporation's activities were highly appreciated in the Time magazine.

In addition to placing materials that are freely available, the company, of course, took orders and to conduct exclusive analytics. In an article posted in the same Time magazine in 1999, the company's customers included McDermott International, a machine-building company operating in South and North America and the Middle East. Among the clients, the companies from the 500 number of the largest in terms of income were also named (although there were no company names). Information about the cost of services Stratfor was also not provided. In 2001, Barron's newspaper, which gave the corporation the name “Shadow CIA”, published material that included the sum of 40 thousand dollars. It is this amount, according to journalists, that customers paid the company for providing annual exclusive analytics. But the agency’s staff achieved particular success during the search for Osama bin Laden. They were the ones who managed to find a Pakistani doctor who gave the location of the al-Qaida leader. It is rumored that George Friedman, the creator of the corporation, received 25 million dollars, that is exactly half the remuneration promised by the American government for the head of the insurgent. Moreover, the corporation has a DNA sample, prints and photographs of the deceased terrorist, although it was officially reported that his body was buried in the waters of the Persian Gulf.

George Friedman considers his reason for his success in his approach to covering the world situation, which is significantly different from the media approach. According to him, the main difference is that the experts of his organization not only answer the questions “What? When? Who! How? and Where? ”, but also predict the future situation and tell why it will be so and not otherwise. For example, according to Friedman, his analysts were able to predict the war in Georgia in 2008 using this approach.

Friedman is also convinced that work with sources is fundamentally different. While analysts of the agency work out a huge array of materials from open sources and at the same time use their own informants to obtain information, journalists often simply go on about their sources and simply retell the information received. In addition, Stratfor with great distrust relates even to the words of high-ranking officials.

Friedman stresses that his team is more independent than journalists, although WikiLeaks casts such independence under great doubt.
Information regarding the corporation was handed over to Assange by hackers from Anonymous, who hacked into the agency’s website last December.

According to WikiLeaks, the intelligence company's correspondence they have sheds light on its informants (representatives of the US government, intelligence services and journalists), capital laundering schemes, the structure of financial flows, as well as the psychological impact that corporate employees use.

According to Assange, the disclosure of Stratfor’s classified data can be compared to Enron Corporation, which went bankrupt in 2001, after it was learned that the financial reports had been falsified to mislead investors. However, it will be possible to judge how legitimate such a comparison will be after all the correspondence has been published, which is more than 5 million letters in 2004-2011 years.

To date, the head of WikiLeaks is particularly concerned about the fact that the agency collected information about civil organizations on the instructions of large corporations. In particular, he mentions the cooperation of Stratfor with the American chemical company Dow Chemical Company. In 2001, this company bought the Indian Union Carbid, a factory where a man-made disaster occurred in 1984. In addition, Friedman’s employees collected information on activists who wanted to force the company’s management to pay damages from this disaster when 18 thousands of people died. Among the clients of the corporation are also called Raytheon - a supplier of the Department of Defense of America, Lockheed Martin - the largest enterprise of the military-industrial complex in the world, which has most of the orders of the Pentagon, Northrop Grumman - the American military-industrial company, as well as the Marine Corps, the Ministry of National Security, air force; Miami police; and large banks.

Another interesting fact is that after the publication of a part of the agency’s information, it turned out that one of Stratfor’s clients was an employee of the Foreign Intelligence Service of Russia, Elena Vavilova, who worked in America and was one of the figures in the “Russian spies” case.

As for the materials recently published in WikiLeaks, the Russian government was very interested in the mention of Russian Prosecutor General Yuri Chaika, who, according to documents, passed as RU101 and was considered an informant of the highest class (this meant a high degree of trust). So, in particular, Chaika told about the struggle between the clans and what methods this struggle is waged. In addition, he spoke about how these clans maintain the balance of power, while not stopping the struggle for resources and power.

It is clear that immediately after the appearance of such information, representatives of the General Prosecutor’s Office made a refutation, calling the inconvenient information provocative of Western intelligence agencies, who for some reason were interested in the resignation of the prosecutor.

In addition, information about another Russian agent appeared in the Stratfor documents - a certain military man under the code name RU153, who said that there are already five brigades in Russia that are armed with Iskander missile systems. He also provided evidence that these complexes were used during the Ossetian-Georgian conflict in 2008.

Thus, it is not yet possible to assess the importance of information draining for the world community Meanwhile, Stratfor recovers the system after hacking and tries to convince its customers that this will not happen again.